“Why's Everybody Always Picking on Him?” 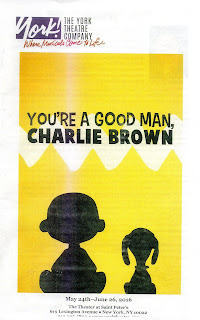 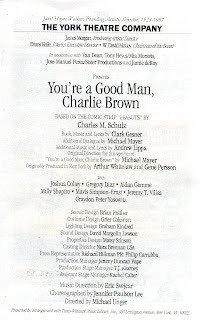 No matter what you think of the show itself, there’s no denying the popularity of You’re a Good Man, Charlie Brown, Clark Gesner’s (book, music, lyrics) 1967 musical. Like “Peanuts,” Charles M. Schulz's brilliant comic strip which inspired the show after it began life as a “concept album,” it became a crowd-pleasing phenomenon. An Off-Broadway, touring, and school production phenomenon, at any rate; Broadway was another story. With a cast of young adults playing six-year-olds Charlie Brown, Linus, Snoopy, Patty, Schroeder, and Lucy, the first production ran for 1,597 performances at the tiny Theatre 80 on St. Mark’s Place; later, there would be countless productions all around the world.

Broadway audiences, though, never bought the show. First came the version that opened in June 1971, several months after the closing at Theatre 80, and with a completely new cast and production team; it vanished after 15 previews and 32 performances. Then there was Michael Mayer’s 1999 revival, using a revised script with additional material by Mayer and Andrew Lippa; it had 14 previews and 149 showings before folding. It did, however, garner Tonys for Roger Bart as Snoopy and Kristin Chenoweth as Sally Brown, a new character added to replace Patty. Ben Brantley’s love letter of a review for Chenoweth helped rocket her to the stardom she still enjoys.

The revival itself, though, was considered overblown, lacking the simple innocence the show originally had enjoyed, so it’s good to see the new staging at the York Theatre (which uses the 1999 script) attempting a return to the show’s simpler roots. The production, inspired by a concert performance at Feinstein’s/54 Below, is especially unique because, instead of using the traditional cast of young adult actors, it opts for an all-kids cast, ranging in age from 9 to 13, most with Broadway credits. It’s an idea, however, that looks better on paper than in reality. 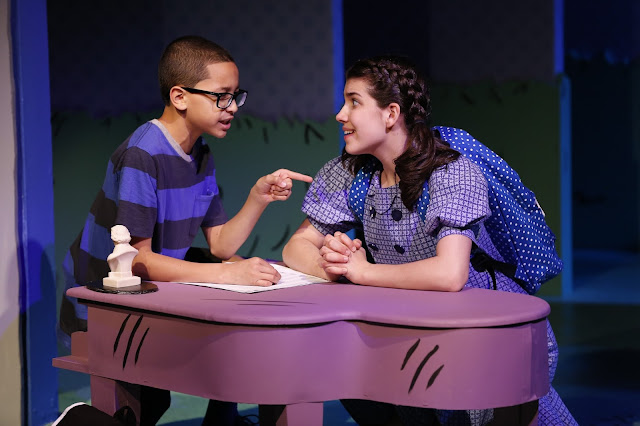 You’re a Good Man, Charlie Brown tells the story of a day in the life of the hapless Charlie, from waking to going to sleep; there’s no plot per se, other than Charlie’s wish to be a good man and realizing he is one at the end of the day. Structurally, the book is a sequence of vignettes and songs illustrating the familiar qualities of the beloved "Peanuts" gang. Joshua Colley (Newsies) plays the befuddled Charlie Brown; Gregory Diaz is the Beethoven-mad Schroeder; Aidan Gemme (Finding Neverland) handles the beagle Snoopy, who daydreams about World War I dogfights with the Red Baron; Mavis Simpson-Ernst (Evita) covers the bossy Lucy, crazy about Schroeder, and offering psychiatric advice at her booth for a nickel a visit; Jeremy T. Villas is the security blanket-dragging, thumb-sucking Linus; and Milly Shapiro (Matilda) portrays Sally Brown, Charlie’s younger sister, who sings about her “philosophies." 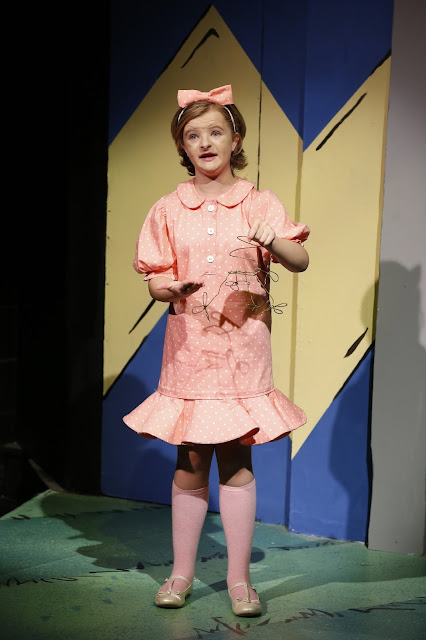 The operative word for this ensemble is “cute,” but there’s only so much cuteness one can take, and this show requires you to absorb two acts of it spread over two hours and 15 minutes. If you’re a “Peanuts” fan, you’ll enjoy its well-known tropes but if you aren’t you may find yourself waiting for a Kristin Chenoweth moment that never comes. 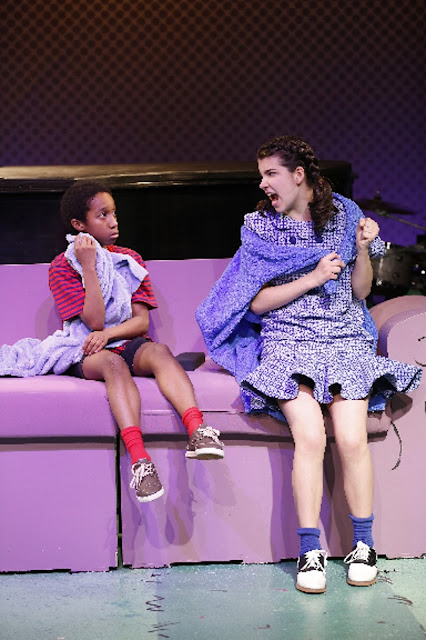 The conceit of using talented kids doesn't go very far. Capable as they are, none is especially outstanding, although Gemme’s Snoopy has a delightful Hamish Linklater vibe, Villas displays impressive dance chops, and Colley sings sweetly. The big, big problem is that they’re too young to provide the kind of ironic insights that we’d look for in mature actors playing such preternaturally precocious youngsters; instead, we get just the general appeal of their prepubescent presences.
Brian Prather’s minimal set, brightly lit by Graham Kindred, is little more than a piano mounted on a turntable, cartoon clouds and carried-on units, a mechanized red doghouse, and flats painted with comic strip cross hatching. The costumes, by Grier Coleman, capture something of the strip’s look, including Charlie’s zigzag black strip circling his waist. (The original production, by the way, didn’t try to look like Schulz’s drawings; Charlie wore an orange baseball cap, tan sweater, and brown slacks, looking more like an Ivy Leaguer than a first grader.) The performances are greatly enhanced by the onstage musical direction and piano playing of Eric Svejcar, accompanied by Mark Verdino on bass and Adam Wolfe on drums.
It’s hard to resist the sense you’re watching children’s theatre in this revival. The show is cute, the kids are cute, the numbers are cute. But, as I’ve said, cuteness has its limits and mine came well before Charlie’s pals say good night and Lucy delivers the sentence used in the show’s title.