"A Slice of Toast Goes a Long Way" 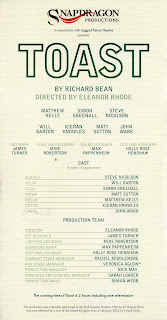 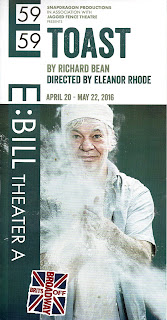 If you’ve ever driven over the Queensboro Bridge (now the Ed Koch Bridge) from Manhattan into Queens you’ve seen the huge, red Silvercup Studios sign marking the site of New York’s largest filmmaking facility. Those of a certain age will recall that this was the longtime home of the Silvercup Bakery, which went out of business in the late 70s, taking with it not only a major Queens business but the sweet, warm smell of bread baking that filled your nostrils as you approached the other side of the East River.
The memory of that long-gone fragrance came floating back as I watched the U.S. premiere of Richard Bean’s (One Man, Two Guvnors) 1999 play Toast. The play's first major London revival, smartly directed by Eleanor Rhodes for Snapdragon, has been brought over intact for this year’s Brits Off Broadway Festival at 59E59 Theaters. Set in an industrial bakery in the Yorkshire city of Hull (Bean’s home town), it belongs to that small but growing genre of labor-intensive plays located in rundown workplaces in which we view a representative group of eccentrics working out their differences within a story that often concerns the imminent demise of their institution. This season we’ve watched people react to the closing of a Detroit auto factory in Skeleton Crew and a Chicago high school in Exit Strategy. As in those plays, Toast provides a thoroughly naturalistic realization of the workers’ gathering place, this one a flour-covered “canteen,” where seven male employees take their breaks to smoke, drink tea, play cards, chat, and make phone calls.

Toast takes place on a Sunday in 1975, presumably around the time that the young Bean himself worked in such a place. It’s a two-act, two-hour, occasionally funny, and relatively plotless dissection of the workplace circumstances affecting these low-paid, overworked men who put in 60-hour weeks, revealing their camaraderie, incipient hostilities, physical joshing, hierarchical interplay, and personal—including sexual/romantic—concerns. Designer James Turner’s convincingly detailed room, with its double doors and windowed upstage wall, has tables and chairs at either side; there’s even an overflowing garbage pail that the men use as a target for their used teabags.

The workers are the angry, glasses-wearing, balls-scratching (blame it on crabs), ex-con chargehand (a lesser foreman) Blakey (Steve Nicolson); the sexually unfulfilled older worker Cecil (Simon Greenall), in spotless whites, who plays crotch-grabbing pranks on his long-haired, bell-bottomed younger colleague Peter (Matt Sutton); young Dezzie (Kieran Knowles), remembering his days on a fishing boat; the mustached, officious Colin (Will Barton); the odd new worker, Lance (John Wark), who introduces a note of potential magic realism that turns out to be a red herring; and, most memorably, the aging bread-mixer Nellie (Matthew Kelly), a.k.a. Walter, a broken-down lump, seemingly defeated by life, slow on the uptake, and barely communicative. Even the offstage boss, Mr. Beckett, never seen, comes into focus as a philanderer with a taste for the girls who work in custards, pasties, and apple turnovers. While everyone's thoroughly convincing, it’s probably safe to say that most will find Kelly’s monosyllabic Nellie the most absorbing. The way he can make a simple “na” or “yeah” convey meaning is a lesson in thespian subtlety.

Not much happens of significant dramatic interest until fairly late, when the oven gets jammed and the men not only try to fix it without having to inform the boss but also consider who might have been responsible. The chief pleasures are in watching an expertly meshed ensemble of top-notch British actors doing their best working-class stuff, which means we have to contend with their sometimes impenetrable lingo and dialects. Since a big clock up center shows us real time passing, the play doesn’t escape the longueurs (mainly in act one) of watching characters simply sitting around and smoking, but if hyperrealism is your thing, a slice of Toast goes a long way.

Toast
59E59 Theaters/Theater A
59 East Fifty-Ninth Street, NYC
Through May 22