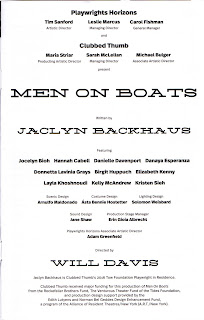 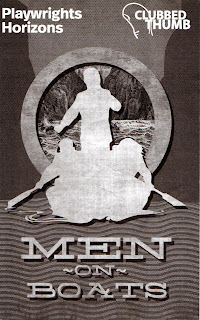 In 1869 one-armed Civil War veteran John Wesley Powell led an exploratory and cartographic expedition with nine other men down the twisting, treacherous Green and Colorado Rivers, and through the Grand Canyon, on behalf of the U.S. government. (Powell, who referred to it as the Big Canyon, coined the name Grand Canyon in 1871.) Their story would seem to be about as ripe for cinematic treatment as any other tale of intrepid explorers in an uncharted wilderness. And, indeed, it was the subject of a movie, 1960’s Ten Who Dared, which Wikipedia claims was one of the worst Disney movies ever, and which is available on YouTube. For a far more artistically successful realization, I recommend Clubbed Thumb’s Men on Boats, a play by Jaclyn Backhaus originally seen last summer at the Wild Project and now being offered (with many of the same actors) by Playwrights Horizons as the first example of its new partnership with Clubbed Thumb.
Powell’s classic tale of chills, thrills, and spills, which he recounted in a book published in 1875 (revised in 1895 as The Exploration of the Colorado River and the Canyons), would seem unlikely fodder for a stage play, given its potential technical obstacles. That didn’t stop playwright Backhaus and director Will Davis from creating this arrestingly theatricalized version in which the characters, all based on white, cis-gender males, are cast, according to the dramatist’s wishes, with “racially diverse actors who are female-identifying, trans-identifying, genderfluid [sic], and/or non-gender-conforming.”
The subject of theatrical gender-bending, is complex. I happen to be reading Maki Isaka’s Onnagata: A Labyrinth of Gendering in Kabuki Theater, which only serves to further muddy the theoretical issues involved. Nevertheless, while I can’t vouch for who’s what among the actors, this cis-gender white male’s impression was of watching a cast of talented actors, none of whom seemed to be cis-gender males, playing rough and ready outdoorsmen. In other words, varying degrees of constructed masculinity are apparent, and the acting is consistently on a high level, but no one is a convincing man in the conventional sense. Moreover, it doesn’t matter.

Men on Boats could as easily be produced with an all-male cast; the nontraditional gender and racial casting add another dimension, the way putting more spice on your food might. The food remains the same but the taste is greatly heightened. So watching these 10, heroic, white men played by a multiracial, non-cisgender male company actually enriches the play’s machismo attitudes, while never becoming the subject of the piece itself. And that subject is the treacherous trip down raging rivers in four small boats and along towering cliffs as one obstacle after another—white water rapids, the loss of equipment and food, steep waterfalls, snakes, and so on—is overcome.

Arnulfo Maldonado’s set is a bare stage backed by a wall of removable doors on which is a blowup image of the Grand Canyon with walls on the side. When the doors open the same canyon image is seen on the wall behind them. Davis’s imaginative staging uses sharply choreographed movement to suggest all the dangers the men confront. Shouted warnings and commands are accompanied by swaying bodies and arms, with only four small, portable prows to suggest the boats, and with only the most minimal of props, such as ropes and a coffee can. Jane Shaw’s brilliant sound effects support the sense of theatrical reality, as do the interesting period costumes of Asta Bennie Hostetter and the expressive lighting of Solomon Weisbard.

The three-month trip, during which four explorers left midstream, so to speak, three never to be heard from again, is compressed into an intermissionless hour and a half. There’s considerable drama in many of the individual episodes, and the way the men behave toward each other as frictions mount has its interest, although, given the circumstances, the men are surprisingly respectful toward one another; the principal conflicts are between man and nature, which should be sufficient.
Still, after a while, the incessant, life-threatening crises tend to pile up and negate one another. No sooner do things settle down after one rough passage than another pops up; since the actors perform consistently in a heightened, slightly tongue-in-cheek, virile way, and Backhaus’s  clever dialogue mingles anachronistic contemporary language with a 19th-century ambience, the tone starts to grow tiresome and the action predictable. There are only so many ways to stage a rough water boat ride. Thus when one of the men, the Englishman Goodman (Birgit Huppuch), decides to leave and a Ute chief (Hannah Cabell) and his wife (Danaya Esperanza) are asked to help him, the introduction of their slyly ironic characters—however briefly—could not come at a better time.

Men on Boats is an ensemble piece in which all the actors deserve applause for bringing their colorful characters to life. They’re Kelly McAndrew, in Union Army coat and hat, as the upstanding Major Powell; Elizabeth Kenny as his burly brother, Old Shady, who sometimes offers a song; Jocelyn Bioh as Hawkins, the ingenious cook; Hannah Cabell as the tobacco-loving O.G. Howland, a cigarette eternally dangling from his lips; Danaya Esperanza as Seneca, his twin, cigarette included; Donnetta Lavinia Grays as Sumner, proud of his outdoors credentials; Birgit Huppuch as the wealthy Britisher, Goodman, who decides he’s had his fill of adventuring; Layla Khoshnoudi as the youthful Bradley, who saves Powell on the edge of a cliff; Danielle Davenport as Hall, the mapmaker; and Kristin Sieh as Dunn, who proudly gives his name to newly discovered sites.

Men on Boats deserves to stay afloat longer than its current run. It’s scheduled to close in mid-August so do yourself a favor and row through the traffic of 42nd Street to discover a theatrical journey you won't soon forget.