“Catch It If You Can” 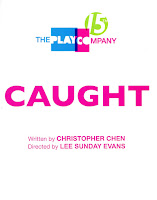 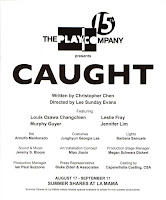 Caught begins by having the audience walk through a gallery in the basement of La Mama displaying a work of installation art subtly critical of contemporary China in its reflection of a dissident Chinese artist's incarceration for political provocation. Once past the gallery and inside the performance space itself the audience sees a plain white wall with the central installation object, a cage-like jail cell. (The art is by Miao Jiaxin and the neutral set, with its sliding walls and rolling units, by Arnulfo Maldonado.)

Then the supposed artist himself, Lin Bo (Louis Ozawa Changchien), appears, lets us know he’s been profiled recently in the New Yorker, and lectures about contemporary political art in China and how he was arrested for having set in motion a potential mass protest in commemoration of the Tiananmen Square Massacre of 1989. His lengthy discourse, using slide projections, explains the devious ways in which subversive art must be carried out to evade China’s censorship, and he describes the horrible conditions in which he was forced to live during his prison stay.

It’s tempting to describe the plot’s unconventional developments in similar detail but that would spoil the surprises—some of them metatheatrical—that await. Each scene is somehow tied to political and artistic issues regarding the elusiveness of truth in art, both narrative and visual, and, by extension, life. The people you meet may or may not be who they say they are. It also helps to know, as the play itself explains, that certain notorious real-life narratives—like the one created by monologist Mike Daisey, who got in trouble for embellishing his account of Chinese factory workers making Apple products—helped spur the writing of Chen’s play.

Following the lecture, the action shifts to a New Yorker magazine office where Lin, the newly minted celebrity artist (think Ai Weiwei), is interviewed by Joyce (Leslie Fray), a young journalist, and her editor, Bob (Murphy Guyer). Wait for the otherwise naturalistic scene's striking change in theatrical tone as it moves toward its conclusion, suggesting the relative levels of theatrical artificiality. (Great music by Jeremy S. Bloom to underscore the mood.)

We then move to a public discussion moderated by actress Leslie Fray, using her own name, who played Joyce in the previous scene (she explains why). Her guest is an artist provocateur named Wang Min (Jennifer Lim), whose relation to the scenes we’ve just witness is clarified, and who explains her own political/academic take on artistic veracity. If you don’t agree with Wang Min, such as when she speaks about cultural appropriation, you may want to wring her neck.
Finally, there’s a somewhat surrealistic scene (the play’s weakest, which would benefit from a five-minute clipping) between Wang Min and Lin Bo who, while played by the same actors we’ve seen in those roles, raise questions about who they really are as they argue and laugh about their personal relationships with a former mentor.

Complex as all this may seem, Chen manages to make most of it accessible, and often very funny, while frequently springing the unexpected on us. There are a number of magnetic sequences showing Chen’s gift for stimulatingly satiric dialogue that sounds both believable and artificial at the same time. A highlight is the charged discussion between the curator and Wang Min, during which the former, acting as a surrogate for the potentially confused audience, drills Wang Min on what she’s getting at, only to grow increasingly frustrated when, every time she thinks she’s grasped her intent, it turns out to be not at all what the artist meant. Of course, when Wang Min eventually explains the convolutions of what a lie is, you may scratch your head bald in trying to figure her out:

The Play Company’s production is every bit as good as anything the Soho Rep, which specializes in works like this, might have done. Director Lee Sunday Evans has created precisely the right ambience for capturing the play’s nuances by inspiring performances that seem off-the-cuff and honest enough to suck the audience into its world of faux reality. Each member of the ensemble has a relaxed, everyday believability that makes their lies like truth (to quote Shakespeare). Heady and unconventionally structured as Caught is, you’ll find that by the end of its 80 minutes you may not have understood every jot and tittle but that, as the title says, you’ve certainly been caught. And that’s the truth.