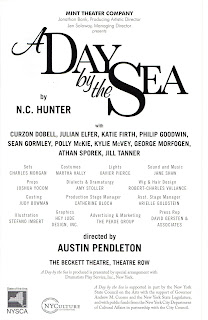 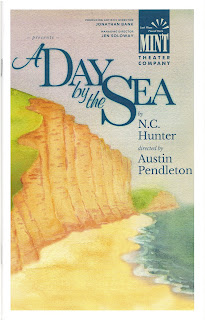 Imagine a play in which a well-off family gathers at their estate with friends and hangers-on. There’s a matriarchal figure, her intelligent but ineffectual son, the son’s professional superior, a doddering octogenarian who slips in and out of his youthful memories, an alcoholic doctor who looks after him, a governess, an estate manager, and an attractive divorcée. Very little happens, although a thread of unrequited love ties together the son and the divorcée, as well as the governess and doctor. Lengthy monologues expressing cynicism about the state of the world as well as idealistic visions of the future mingle with casual, throwaway trivialities. After nearly three hours, the play concludes with a tone of bittersweet regret for lost opportunities and the somewhat forced sense that a new and better phase in the lives of all concerned is about to begin.

No, this isn’t a Chekhov comedy you can’t quite put your finger on. It’s A Day by the Sea, by British playwright N.C. Hunter (1908-71), a 1953 West End hit originally directed by John Gielgud with a cast headed by actors from British theatre heaven: Gielgud as the son, Julian Anson; Sybil Thorndike as his mother, Laura; Irene Worth as the divorcée, Frances Farrar; and Ralph Richardson as Doctor Farley. The 1955 Broadway production (at the ANTA Theatre), however, despite direction by Cedric Hardwicke and an only slightly less luminous cast than its London counterpart—Hume Cronyn as Julian, Aline McMahon as the matriarch, Jessica Tandy as Frances, and Dennis King as the physician—wasn’t able to duplicate the original’s success and the show flopped after 24 performances.

A Day by the Sea is now being revived by Off Broadway’s Mint Theater, specialists at rediscovering worthy forgotten plays, newly ensconced at Theatre Row’s Beckett Theatre. The best one can say of the revival (and of the play itself, for that matter), whose most prominent name is that of director Austin Pendleton, is that it’s dully respectable. The staging is uninspired, the casting flawed, and the acting uneven; moreover, the slow-paced, relatively plotless play, although not entirely lifeless nor without moments of dry humor, suffers too many longueurs. And Hunter’s writing in act one offers a lesson in how not to introduce exposition.
Everything transpires on a beautiful May day at the Anson seaside estate in Dorset; act one and the second scene of act two take place in the garden, while sandwiched in between is a scene at the beach. Charles Morgan’s pretty set reveals the performance as seen through two receding picture frames; a third frame encloses a large painting of a garden or a beach, depending on the locale, hanging on the upstage wall.
The principal dramatic arc concerns the midlife crisis of Julian (Julian Elfer), a stuffy, 40-year-old Foreign Service officer who’s so obsessed with his work and world conditions that he barely has any close relationships; he learns in the course of the play, to his great disappointment, that he’s being transferred from his Paris post back to England.
Whereas Julian takes issue with his mother, Laura (Jill Tanner), because of her lack of concern for politics and current events, she wishes he would get married and take more of an interest in the estate. Romance sluggishly beckons in the presence of 37-year-old Frances (Katie Firth), mother of two, who was raised by Laura; Frances is both a war widow and a divorcée, a woman who’s made her life a bit of a mess. Twenty years earlier Julian failed to notice her love for him; when he, in turn, belatedly begins to fall in love with her, the burning question is: how will she respond?
Brooks Atkinson wrote in the New York Times of the Broadway production that it was “brilliantly acted.” While that accolade can’t be offered this time around, there are generally effective performances from the venerable George Morfogen. whose crusty old man gets a few good laughs; Jill Tanner as the materfamilias, who manages everybody’s lives; and Polly McKie as the governess, Miss Mathieson, a homely, 35-year-old spinster who practically begs the much older doctor to marry her.
As Julian, British actor Julian Elfer shuffles along with a Hugh Grantish, self-deprecating diffidence, but with too little of that actor’s charm; he seems to have a constant sneer of disdain on his face, which one supposes can be viewed as part of the man’s priggishness. Still, annoying as he is at first, Julian grows on you and by the third act, in which the play’s tone lightens a bit, he may even elicit a modicum of sympathy. As Frances, however, the female romantic lead, Katie Firth is seriously miscast, and her dowdy costumes, by Martha Hally (otherwise on target), only heighten the problem. Also problematic is Philip Goodwin’s Doctor Farley, a colorful character who comes off here more like a pickled Shakespearean ham than a philosophical, gin-pickled sawbones.
Among the play’s potentially most interesting moments is the first act debate between the idealistic Julian and the cynical doctor about the possibility of progress in which Julian wishes to see this “age of anxiety” become an “age of tranquility.” What Hunter has provided in this sleepy work might well be called a sea of tranquility.
OTHER VIEWPOINTS:
Show-Score