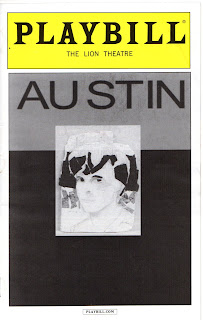 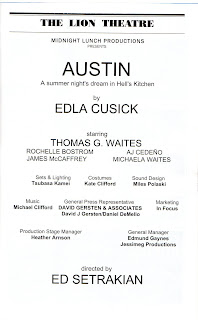 There was a great American actor present at the performance I saw of Edla Cusick’s unimpressive new play Austin: A Summer Night’s Dream in Hell’s Kitchen. Even if F. Murray Abraham were on the stage and not in the audience, there was little he could have done to rescue from oblivion this sloppily written, awkwardly acted, clumsily designed, and amateurishly directed domestic drama set largely in a house in the gentrified Manhattan neighborhood of Hell’s Kitchen.


Cusick, a sculptor/painter who herself lives in Hell’s Kitchen, has undercooked a bland goulash of stage clichés that starts out as a kooky family comedy and descends into dire drama. It concerns an out-of-work, 55-year-old alcoholic with Athlete's Feet named Austin Cassidy (Thomas G. Waites), a once successful money manager, whose beautiful wife, Petra (Rachelle Bostrom), has a spoon collecting/polishing fetish; she stole the spoons from fancy European hotels but what it has to do with anything is never revealed. Petra's told their smartass, amoral, sexpot of a 16-year-old daughter, Pandora (a.k.a. Dory; Micaela Waites), that dad's dead, so she's in therapy with a celebrity therapist who's been showing signs of sexually inappropriate behavior that Petra casually dismisses.

But then pop pops up at their Brooklyn home, having actually been in rehab, and wanting desperately for Petra to forgive him so he can move back in with her and Dory, who takes about 15 seconds to recover from the shock of learning that her doting father is alive. Petra agrees to Austin's request, albeit reluctantly, if he can stay sober for three months. Meanwhile, he’s forced to accept his slightly younger brother Martin’s (James McCaffery) hospitality to live with him in the now expensive family brownstone in Hell’s Kitchen, which Martin owns after having bought Austin’s share years earlier.

Martin, for all his good intentions, is having a serious affair with Petra, while Austin is drawn to his young rehab counselor, Andy (AJ Cedeño), who’s helping Austin—suddenly obsessed with gardening—to landscape Martin’s garden. Add to this mix Austin’s uncomfortably close relationship with Pandora (“Dory”), whose toenails he paints, and you have a stew of booze, adultery, sibling rivalry, homosexuality, and incipient incest that fails to coalesce into anything remotely edible.
The plot zigs and zags with unconvincing developments, including Austin’s attempt to persuade the well-off Martin to invest a large sum of money in a country inn, a locale that figures in the play’s bizarre excuse for a conclusion. Austin, by the way, speaks of Robert F. Kennedy, who was assassinated when Austin would have been seven, as if he were a childhood hero: “You can’t imagine how we loved Bobby. He was going to end the war. He cared about poor people. He was so handsome. He drove all over with his cocker spaniel in his lap.”
Perhaps a better production might have made some of this less squirmworthy (some scenes read better than they play) but director Ed Setrakian strikes out on several fronts, including his inability to evoke from his players the right blend of comical lightness and emotional depth. He’s also failed to inspire a simple unit set from designer Tsubusa Kamei (set and lights) that would have helped move the episodic piece along at a steady clip, giving us less time to ponder the awkward dramaturgy. Instead, the set, which has to represent half a dozen locales, is composed of a complex series of pivoting screens that require a team of stagehands to continually enter in half-light to rearrange them and move furniture. These amateurish shifts, accompanied by Michael Clifford’s musical background--more white noise than music—kill audience interest time after time.
Thomas G. Waites, a veteran actor and acting teacher, gives a performance so overwrought he seems to be both trying to force life into his cardboard character and to justify his star billing. His climactic drunken monologue, performed high over the stage on a catwalk representing a roof, is so artificially inflated you might think he’s going to take flight. McCaffrey’s Martin would be much better if his strained way of speaking didn’t make him sound as if he were afraid of being overheard. Bostrom is very attractive; we’ll leave it at that. Cedeño is passable as Andy; as Pandora, Micaela Waites (the star’s real-life daughter), in her 20s, barely passes as a teenager, even one with a string of lovers.
Austin adds little of interest to this summer’s lineup of new plays. For me, the big takeaway was learning that playwright Edla Cusick is the granddaughter of famed 1920s and 1930s set designer Aline Bernstein, once the lover of writer Thomas Wolfe, a subject she’s written about in another play, Midnight Lunch; Austin, it might be noted, is presented by Midnight Lunch Productions.
OTHER VIEWPOINTS:
Show-Score