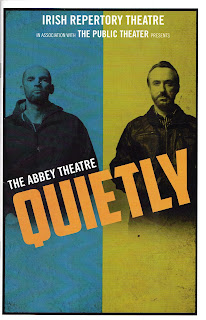 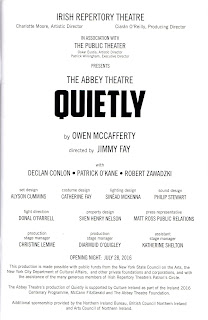 Just last week a horrendous terrorist act by a child was carried out in Turkey when a 14-year-old suicide bomber killed over 50 people at a Kurdish wedding. The use of children as agents of terrorism is nothing new, as demonstrated by Quietly, Owen McCafferty’s sharply honed 70-minute drama kicking off the season at the Irish Rep. The play, in a production that originated under Jimmy Fay’s direction at Dublin’s Abbey Theatre (Ireland’s national theatre), is being given in association with the Public Theater.

It’s set in 2009, and the bombing it references (presumably fictional but nonetheless representative) occurred in 1974, when five Irish Catholic men died after a 16-year-old Protestant boy enlisted by the Ulster Volunteer Force threw a bomb into a Belfast pub where the men had gathered to watch a soccer (football) match.
Suicide bombing was not the fashion in the Northern Ireland troubles that form the play’s background, which allows McCafferty to create a situation where Ian (Declan Conlon), the bomber, now 52, arranges to meet up with Jimmy (Patrick O’Kane), also 52, the son of one of the men killed in the bombing. The political issues of the 70s may have been settled, at least technically, but the passions that roiled the citizens continue to seethe.
Both men are seeking “truth and reconciliation.” Jimmy—fiercely confrontational, his shaved head and bristling intensity giving him a thuggish cast—wishes to purge the anger and hate still tearing him up. Ian—bearded, in a black jacket, and patiently self-assured despite the immense weight on his shoulders—seeks understanding and redemption. The setting is the renovated pub where the bombing happened—a rather generic-looking design by Alyson Cummins—now run by Robert (Robert Zawadzki), a Polish immigrant.
As the confrontation between Ian and Jimmy unfolds, another form of conflict is being enacted in the form of a World Cup qualifying soccer match between Poland and Northern Ireland, viewed by the characters—Robert being the most invested—somewhere over the audience’s heads. Outside the pub, a bunch of hooligans may threaten trouble if Poland wins. Knowing whereof he speaks, Jimmy, says “Kids can do more damage than you think,” and asks if he should get rid of them, but Robert, preferring to avoid more trouble, declines the offer.
The meeting between Ian and Jimmy, though instigated by the latter, begins with Jimmy unable to restrain himself from head-bumping Ian, whom he’s never met; despite several furious flare-ups, the men—while drinking Harp drawn from the bar’s practical taps—engage in an intense verbal exchange, some of it loud, some muted with extended pauses, over the past and their personal suffering; meanwhile, Robert, drawn both to their debate and to the soccer game, watches quietly.  Eventually, a kind of rapprochement brings the immediate conflict to an end, but the result of the soccer match portends further danger as the lights go dark. If we’re not being polarized over one thing, McCafferty seems to be saying, wait a few seconds and there’ll be something else to fight over.
Quietly is emotionally rich and beautifully acted, with thick Irish brogues, under Fay’s carefully orchestrated direction, but, even at little more than an hour in length, its drama and surprises begin to dissipate. The concept is stimulating but in practice is hard to sustain. Still, one wonders, what would a play be like about a present-day terrorist seeking reconciliation with a victim 35 years from now? If they keep killing themselves, though, there’s no way we’ll ever know.