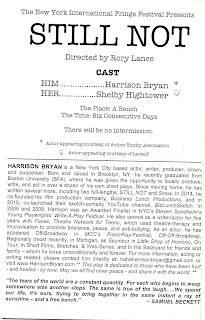 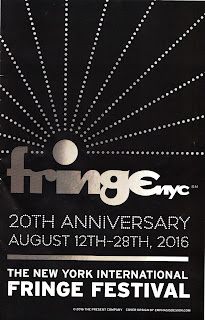 A fan was blowing on the audience early in the performance I saw of Harrison Bryan’s unexceptional Still Not at WOW Café in the East Village, where it’s playing as part of the New York International Fringe Festival; I’m not certain but it seems to have been turned off or put on low soon after (perhaps because of the noise) making the hot and steamy, un-air-conditioned venue even more oppressive on one of this summer’s most sultry nights. Melting as I was, I was more concerned about the play’s two actors (one of them the playwright himself) dressed in clothes better suited to a day in spring or autumn than a sticky New York night.


The play—set outdoors at a park bench—makes no seasonal references (other than to the imminence of rain) so I wished someone had made a last-minute decision to change the costumes to something more summery. Of course, such considerations might have barely arisen if the play were better written or acted; under the circumstances, though, it was hard not to think that what the sweating actors really wanted was a bucket of cold water thrown on them. (And I don’t mean this review.)

Bryan’s hour and 15-minute play is a desultory, boy-meets-girl comedy featuring an anonymous young man and woman, Him (Bryan) and Her (Shelby Hightower). As noted, this is a park bench play, like so many others since Edward Albee’s The Zoo Story opened that Pandora’s box for playwrights. They meet when Him notices that the eternally vacant park bench he passes on his way home from the office is occupied by a pretty young woman. A mild flirtation begins between the shy but persistent Him and the reluctant Her; she resists his goofily gentle wooing because she’s waiting for the boyfriend with whom she’s just broken up (for which she feels guilty) to come along at any minute.

The same basic situation is then repeated in five more scenes, each on the day after the preceding scene, with Her rooted to the bench, waiting like Didi and Gogo for the Godot that never arrives, and Him becoming increasingly frustrated by her stubbornness. (The costumes, be it noted, remain the same throughout, even though a little imagination could have provided some variety without delaying the scene transitions.)
The couple’s conversation offers little more than banal small talk, almost as if they have nothing to share with one another than their feelings and accounts of their dreams. Barely any external reference to the world outside their cocoons is broached; this couple makes tedium a sport worthy of the Olympics. The play’s dramatic arc, despite minor flare-ups into potential drama, is as flat as a day-old Coke, and by day three you’re already counting how many days remain. There’s a mildly interesting plot twist at the end, but at that juncture you’re simply happy the thing is over and everyone can head for the showers.
Still Not began as a scene Bryan wrote for an MFA class at Boston University and, while fiction, was inspired by his romantic relationship with his fellow student, Hightower, who has remained with the piece as it’s evolved over the past few years, even after she and Bryan split. Clearly, the difficulty of finding and sustaining love is the play’s driving theme but Bryan needs to go deeper than he has here, with more compelling circumstances and characters, to make such cliched material work.

Whatever the up and down circumstances of their personal relationship, neither Bryan nor Hightower is sufficiently believable or charming in these uninteresting roles. Trying hard to be natural they instead fall into mannered cuteness, the kind where every transition seems to have been given a subtext that the actors feel compelled to express physically. The result comes close to mugging. Perhaps director Rory Lance allowed this because he believed it added necessary spice to a bland script. Still Not, however, still does not click.

As the audience departed each member was given an ice-cold bottle of water. These were perfect for us but too late for the play.

*In deference to my friendship with someone involved in this production, I'm refraining from using a thumbs up/down icon for it.