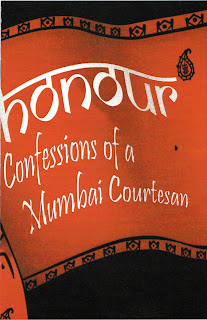 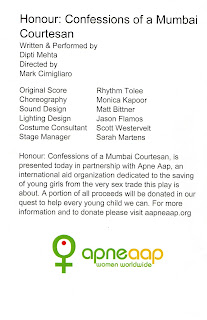 The first thing my companion and I wanted to know as we emerged onto E. 4th Street after seeing Dipti Mehta’s NYC Fringe offering, Honour: Confessions of a Mumbai Courtesan, was how much the other had comprehended of what we’d just heard. Then, as we walked toward the subway, a woman who had seen us at the show stopped us to check if we, too, had had trouble following the piece. We weren’t alone!

Mehta’s provocative one-woman piece is about half a dozen denizens of a Mumbai brothel: Rani, a 16-year-old on the verge of becoming a professional whore; Chameli, her madam-like mother; Shyam, a sleazy pimp; Laal, a “fat, rich, old guy”; Pandit Rama, a lecherous Brahmin priest; and Meena, a transgendered person (hijra) claiming to be “half man, half woman.” It has a great deal going for it in both its subject matter and Mehta’s versatile performance.
Unhappily, it has her speaking a mumbo jumbo patois using huge swaths of Indian-accented dialogue, replete with colorfully broken English and Hindi; too often, communication is gone with the monsoon. When she switches from English to Hindi and back again, as she often does, you may not even be sure where one ends and the other begins. It's also often hard to keep up with who's talking at many moments because of the rapid-fire character switches. And it's a shame that the seriously muffled, recorded voice-over segments (sound design: Matt Bittner), which contain material from the Mahabharata about the tragic love of Draupadi (serving as a poetic avatar of Rani) for Karna, are so aurally fuzzy, weakening the impact of Mehta’s accompanying them with the vivid gestures, facial expressions, and movements of classical Indian dance.


The play is related to the hot topic of sexual slavery but its story is not about trafficking per se. It’s a look at the world of Indian prostitution through the tale of a specific individual, Rani, growing up the daughter of a mother, Chameli, who was forced into prostitution by her father at 13, and of how Rani—who longs for love with one man—has no choice in India’s social system but to become a sex worker like her mother. Chameli, knowing there’s no alternative, must behave cruelly to Rani in order so that she may at least become a courtesan, rather than a lowly prostitute. Chameli’s tragedy is that she must be her own daughter’s pimp when bargaining with a client for the highest price she can get for the privilege of taking Rani’s virginity, or her “honour,” as the play puts it.
Most of what is said is directed either to the audience or to an unseen and unheard American female filmmaker who has been paying Chameli for the right to observe life in the brothel. This brings to mind the excellent 2004 documentary Born into Brothels about a similar situation in Kolkata. Regardless, the subject is rarely covered in the New York theatre, and Mehta has done very well by offering what amounts to a dramatized case study; a coda set some years after the main events is also included. Honour takes pride in being presented in partnership with Apne Aap, “an international organization dedicated to the saving of young girls from the very sex trade this play is about.”

Honour, it should be emphasized, isn’t didactic agitprop; much of it is human and funny, although it never manages to be as heartbreaking as the subject might suggest. It’s set in a whorehouse so you can expect a heavy dose of unabashed sexual humor and language. When Rani first sees the audience, she says: "Hello! How the fuck did you get up here?" A minute later, she's teaching us the local swear words. We even learn that the place we're in is called Fuck Lane.

The Mumbai-born and raised Mehta, a dark-haired beauty dressed in tight pants, swirling skirt, silk sash running aslant across her breasts, ankle bracelets, and other accoutrements of Indian dance (costume consultant: Scott Westervelt), is an accomplished actress-dancer who trained in bharatanatyam and kathak while studying for her doctorate at the University of Arizona (she has a PhD in cellular and molecular biology and does cancer research at Sloan Kettering).
Although a photo of a previous production displays a colorful, if minimalist, set of hanging laundry and projections, director Mark Cirnigliaro is, unfortunately, forced to strip the work down to its fundamentals for the Fringe (where multiple shows share the same venues): a chair on a black stage, three musicians (two drummers and a singer) seated on the floor against a wall, and a musician at a synthesizer up left (the original music is by Rhythm Tuleo). Jason Flamos makes the most of his limited lighting palette.

What makes Honour most unusual as a solo piece, in addition to its subject matter, is that its performer/writer is able to tell its tale by employing her considerable dance skills to make each character entertainingly larger than life, although occasionally lapsing into cartoonishness; I especially liked her characterization of the handsome, cocksure pimp, chain-smoking his bidi cigarettes. Using Monica Kapoor’s expert choreography, Mehta employs not just traditional dance to portray her people—for each of whom she radically alters her voice and posture—but even introduces chunks of Bollywood terpsichore.

If Mehta and her director could fix its problems of verbal clarity, Honour would deserve an extended run somewhere. Right now, it remains a work in progress, albeit an honorable one.