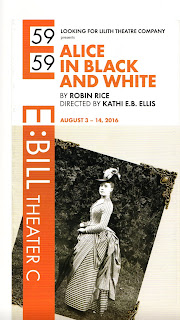 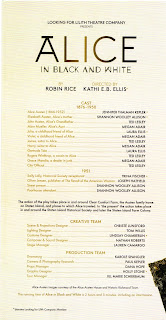 The first unwritten rule of play reviewing might very well be: “Thou shalt not leave in mid-performance, no matter how much of a clunker the show is.” And thus I stuck it out when, during the intermission of Robin Rice’s ineffective Alice in Black and White, about half the audience of around 50 in tiny Theater C at 59E59 Theaters rushed for the exits. Even my usually stalwart companion urgently sought my okay to leave. The play in question, a lugubrious, amateurishly staged (by Kathi B. Ellis) and acted biodrama, running over two hours, is about one of the first important American female photographers, Alice Austen (1866-1952).

Rice’s play introduces us to Alice (Jennifer Thalman Kepler) as a multitalented, highly athletic young woman from a prominent Staten Island family living on an estate called Clear Comfort Farm (now a museum). As a girl, Alice, something of a rebellious tomboy, takes up the avocation of photography, to which she becomes a devoted perfectionist, gradually compiling a collection of thousands of glass plate negatives. Growing older, she turns down one eligible bachelor after another despite the pleadings of her mother (Shannon Woolley Allison) and grandfather (Ted Lesley), a transcendentalist friend of Ralph Waldo Emerson’s. (Quotes from Emerson, Thoreau, and Margaret Fuller litter the script.)
In middle age she meets and falls in love with a woman named Gertrude Tate (Laura Ellis), who becomes her live-in companion, and travels widely, always lugging her camera along. Although her choice of subjects is eclectic, she appears to be especially interested in capturing the lives of the downtrodden. At one point, her mother rails: “I will not have my daughter traipsing down dirty alleys taking photographs of fishmongers and shoeshine boys.”

The episodic play moves forward in chronological spurts to spotlight moments in Alice’s life, beginning when she’s ten and taking us to her final years in the mid-20th century. Following the 1929 stock market crash Alice loses her family’s fortune and, with Gertrude, sinks into increasing poverty and illness (Gertrude goes blind). The play takes great pains to chronicle their suffering in Alice’s once exquisite, now crumbling family home.
Ultimately, Alice has to declare pauperdom and move to the poor house, but, in 1951, not long before her death, she has the good fortune for her photographs to be discovered when a publisher named Oliver Jensen (Joseph Hatfield), compiling a book called The Revolt of American Women, diligently searches out Alice’s glass negatives at the Staten Island Historical Society and makes them public. Thus rescued from want, she lives out her last months bathed in admiration.

Apart from a small number of pictures she published commercially (not mentioned in the play), Alice Austen was a highly talented amateur who never sought a career as a photographer, not even when she was literally starving. If Alice in Black and White is any indication, she appears never to have given any thought to making a living by her skills, so her photography, however excellent, was merely one more accomplishment of a privileged woman whose life—at least as limned here--was marked mainly by her disdain for marriage, unconventional liaison with another woman, and descent into indigence and the indignities of old age.

Hoping to make Alice’s life stageworthy, Rice crosscuts her biographical drama with scenes of Oliver seeking out the negatives and, once they’re found, the woman who created them. Oddly, we never clearly learn how he knows of their existence (he even has to do detective work to find out who took them since only initials are available). These intrusively clumsy scenes involve him in a totally unconvincing romantic relationship with the uptight historical society receptionist, Sally Lally (Trina Fischer), whose favor he needs to gain access to the photos.
At one point, Sally has a bizarre scene in which she flips back and forth from her own persona to that of a British woman named Mrs. Beeton, whose book about household management for Victorian women she uses in her work as a historical guide. It deserves to be memorialized as an example of poor writing and worse acting.

This is a barebones production, acted in a black box with some carelessly hung, unframed Austen photos hanging from a wall, a few white furnishings, and projections (credited to Christé Lunsford) of Alice's work. Tom Willis’s multi-cued lighting slightly enhances the boring visuals, as do the just passable period costumes of Lindsay Chamberlin, but since the vast majority of the photos projected are landscape shots of homes (mostly, one assumes, of Clear Comfort), there’s barely any way for us to appreciate the range of Austen’s photography unless we do an online search or visit her Staten Island home. And Rice never once expresses any specific analysis or critical appreciation of Austen’s work to justify her historical significance.
While Rice’s play fails to bring her subject to life, the same is true of the production, which uses seven actors to play 16 characters, although no one has the requisite versatility to play multiple roles. There are several moments when it’s anyone’s guess as to who some people are. The greatest challenge is faced by Kepler, who has to age incrementally throughout and who can do little more than depend on embarrassingly hoary stage clichés in doing so, especially when she has to play Austen as an octogenarian.

It’s good to be reminded of a woman, still little known to the general public, who made an important contribution to her chosen art. However, based on Alice in Black and White, Alice Austen’s life, for all the pathos of its ending, seems about as dramatic as one of her placid photos of Clear Comfort Farm. Simply stated, this play has more negatives than it can handle.