Vivian Neuwirth’s sensitively written but dramatically inert Mr. Toole is yet another example of how difficult it is to write biographical dramas about famous writers. The eponymous subject here is John Kennedy Toole, a name familiar to readers of his New Orleans-based magnum opus, A Confederacy of Dunces; the book has sold nearly 2 million copies and been translated into 20 languages. As dramatized here, Toole’s personal story is memorable not so much for what his own life was like but for what happened following his death. 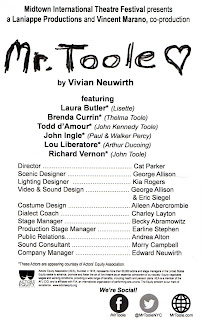 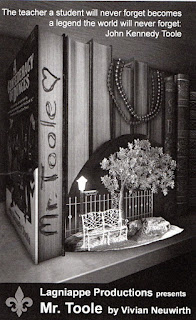 Suffering from depression after being unable to find a publisher for Dunces, the 32-year-old Toole killed himself in 1969 near Biloxi, Miss., by carbon monoxide poisoning. Nonetheless, his determined mother, Thelma, with whom he had a contentious love-hate relationship vaguely echoing that of the son and mother in Williams’s Glass Menagerie, continued to seek a publisher. Following numerous rejections, she hit upon the idea of having the distinguished writer, Walker Percy, then teaching at Loyola University, read the manuscript. Greatly impressed, he used his influence to get the book published, leading to its winning the posthumously awarded 1981 Pulitzer Prize.

Neuwirth has written a “memory play,” in which Lisette (Laura Butler), a student of Toole’s at New Orleans's St. Mary’s Dominican College, with a deep crush on him, drifts in and out as a narrator for a loosely connected series of scenes (think Tom in The Glass Menagerie). We see Toole (known as "Ken") teaching Eliot’s “The Lovesong of J. Alfred Prufrock,” whose title character seems meant to suggest Toole himself; watch his strained interactions with his parents, with whom he lives: the father, John (Richard Vernon), sinking into dementia, and the mother, Thelma (Brenda Currin), an irritatingly controlling matriarch; catch a hint that he’s gay during a barroom scene with a friend (John Ingle); learn how upset he is when Robert Gottlieb, a Simon & Schuster editor interested in the book, asks for major revisions; observe the support Thelma receives from her brother, Arthur (Lou Liberatore), after John passes; and witness Thelma’s overcoming Percy’s (John Ingle) reluctance to read the book. Oddly, what followed is offered almost as a throwaway coda in Lisette's closing lines.

Neuwirth is uniquely qualified to write Mr. Toole as she actually was a student of Toole’s; her drama is an homage, not to his book, but to the man. Presumably, that's why she chose to create a college-girl narrator, perhaps a reflection of herself; it's questionable, though, whether telling the story through her eyes is the best approach, as her presence seems so peripheral to his life. Unfortunately, Toole comes off as a high-strung neurotic with very little of the humor that helped make the book so effective. It's been argued that the man was going mad during this period of his life, but what we see appears to be petulant frustration rather than insanity. Toole was physically attractive, as is the actor playing him, but he was also noted for being funny, a quality in short supply in Mr. Toole. One of the only times he lightens up is when he and Thelma do a sweet duet of “Way Down Yonder in New Orleans.”

For those seeking more detailed accounts of Toole's life than a 90-minute play can offer there are several important biographies. They include Ignatius Rising: The Life of John Kennedy Toole (whose description of the letters exchanged between Toole and Gottlieb suggests a potentially more interesting play than the one Neuwirth has written); Butterfly in the Typewriter: The Tragic Life of John Kennedy Toole and the Remarkable Story of A Confederacy of Dunces; and Ken and Thelma: The Story of A Confederacy of Dunces. Toole's novel may not have the widespread fame we associate with works like The Catcher in the Rye or To Kill a Mockingbird but its acclaim and, as these biographies make clear, the story of its publication certainly provide seeds for a worthwhile play. Neuwirth simply hasn't found the tools yet with which to turn her material into compelling theatre.

Talented director Cat Parker does her best to wrest dramatic interest from Mr. Toole but neither she nor her company of noteworthy thespians can overcome the play’s listless dramaturgy, in which Toole himself dies midway through (although briefly reappearing as a memory figure); one must wait for the final scene before anything approaching real dramatic interest appears. The barebones production, an offering of the Midtown International Theatre Festival, is substantially enhanced by the video projections of George Allison and Eric Siegel, which vividly establish the various locales.

A surprising number of attempts at making A Confederacy of Dunces into a film have failed to get off the ground, almost mirroring the book’s history at finding a publisher. A stage adaptation, however, succeeded in Boston in 2015, starring Nick Offerman. Neuwirth’s otherwise sincere and heartfelt play almost completely avoids the book’s contents (said to borrow substantially from Toole’s life), possibly because of copyright issues, and you’ll have to find out for yourself what all the fuss was about. I, for one, now know what I’m going to do with that Barnes and Noble gift card I got for my birthday.