“All in Love and War's Not Fair" 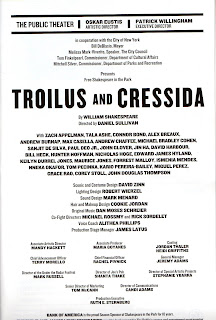 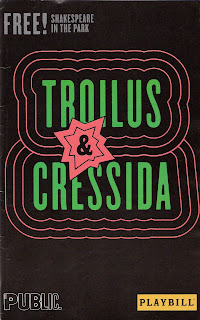 Daniel Sullivan’s testosterone-fueled, buff-bodied production of Troilus and Cressida for Shakespeare in the Park (that venerable institution’s third revival of the play) serves the noble purpose of giving work to a cast of nearly 30 actors, well-known and otherwise.  They work valiantly to make this satirical “problem” play less problematic; Shakespeare’s script, however, during which two stories (drawn from Homer and Chaucer) vie for attention, neither with a truly admirable character to root for, remains mired in its own internal conflicts, like the war that composes its background.

One plotline follows the story of the Trojan War during the seventh of its 10 years; the war, of course, was fought to retrieve Helen (Tala Ashe, who doubles as Hector's spouse, Andromache ), the beauteous wife of the Greek, Menelaus (Forrest Malloy), after she was abducted by the Trojan prince Paris (Maurice Jones). The chief focus among the Greeks is on the rivalry between the powerful lummox Ajax (Alex Breaux) and the thuggish Achilles (Louis Cancelmi), who’s been moping in his tent, refusing to fight. He eventually attributes this to a request from Polyxena, the Trojan princess he loves (along with his “masculine whore” Patroclus [Tom Pecinka]).

Overseeing the Greeks is their general, Agamemnon (John Douglas Thompson), served by his hoary advisor, Nestor, played—despite the references to his advanced age—by James Edward Hyland as a an aging combatant still proud of his vigor. And stirring things up is the crafty, philosophical Ulysses, performed by Corey Stoll in oddly out-of-place spectacles, business suit, and cuffs tucked into combat boots, like a hybrid civilian-soldier.
The other plotline follows the efforts of the sleazy, white-suited, pandering Pandarus (John Glover, clomping about with a cane and an annoyingly distracting limp)—the old uncle of the beautiful Cressida (Ismenia Mendes), daughter of the Trojan priest Calchas (Miguel Perez)—to arrange a liaison between his niece and the young Trojan prince, Troilus (Andrew Burnap). The lovers swear to be faithful but, after a night of love, this comes to naught when Cressida’s father, Calchas (Miguel Perez, who doubles as Priam), who’s joined the Greeks, arranges an exchange for her with a captured Trojan.
While visiting the Greek camp, Troilus, aided by Ulysses, discovers Cressida canoodling with the Greek Diomedes (Zach Appelman). Unlike Romeo and Juliet, to whom Troilus and Cressida are sometimes compared, lust, not love is the power driving these lovers. Ultimately, the plot threads join, the Greeks and Trojans battle, and Troilus’ older brother, Hector (Bill Heck), the great Trojan hope, is treacherously slain by Achilles’ followers at his command.
Sullivan’s staging, which sets the play in the present-day world, accentuates its antiwar message, a directorial approach that became increasingly common during the Vietnam years. Here, the Greek military wear sand-colored, American camo and the Trojans Special Ops-like black. Updating Shakespeare’s military characters to modern times can sometimes be illuminating, but the attempt to underline the playwright’s skepticism toward war and heroism by tying the Trojan War, however vaguely, to the current Middle East quagmire, represents a false equivalency. The point could as easily, and less confusingly, be made in traditional period costumes.
On the one hand, thanks to the excellence of the smoke-filled battle scenes (which can be credited, at least in part, to fight directors Michael Rossmy and Rick Sordelet), the martial action, both mano a mano and by bands of opposing soldiers, is theatrically exciting. On the other, it’s impossible not to wonder—given the weaponry—why the war’s taking so damned long to end. Had Homer’s soldiers fought with firepower like this it would have been over in months. It almost seems that, until the explosive mêlée that ends the play (with guns fired directly at the audience), the only fighting has been in conventional hand to hand style. Where have those bullets been for seven years? (An arranged bout between Ajax and Hector resembles mixed martial arts.)  The very reason these heroes—men like Achilles (Louis Cancelmi), Ajax, and Hector—earned their reputations is because of their personal combat skills, the kind that are meaningless when firearms are introduced.
The three-hour production is acted with energy, clarity, vigor, and understanding. Cancelmi, who replaced David Harbour as Achilles after that actor suffered—I’m not making this up—a torn Achilles tendon during a fight scene, gives his tattooed, bare-torsoed, unshaven, but nevertheless eloquent hero an edge of macho crudity. The approach captures the coarseness, moral as well as physical, of men at war. Breaux, who's making a career of roles that display his ripped physique (he was the swimmer in Red Speedo), does well by the brutish Ajax even though he’d probably have made a better Achilles and Cancelmi a more convincing Ajax.

Heck gives the finest performance, making Hector a believably conflicted warrior, one who professes nobility but is reduced to savagery; Heck makes every second of his limited stage time count. Max Casella as Thersites, the scurvy, cynical, always raging slave, also deserves notice. Thersites, the voice of ugly truth, is one of Shakespeare's most demanding roles, mingling anger with humor, but it's hard to laugh at what he says. Casella plays him vividly like a ratlike, aging, New York street urchin.
David Zinn has created a functional set of upstage panels and girders that can be swung around into new configurations; his costumes are satisfactory but, apart from several nonmilitary wardrobes, limited by the range of modern combat wear. Robert Weitzel displays an excellent lighting palette, and positive additions are made by Mark Menard’s sound design and Dan Moses Schreier’s intense music. Sullivan keeps things moving, even at the loss of subtlety, but can’t resist the occasional gimmickry intrusion, like having Pandarus and Cressida review the Greek army passing by, hidden from us, on a laptop screen.
One of the problems facing Shakespeareans is whether Troilus and Cressida ever was staged in Shakespeare’s lifetime. It has wonderful moments, brilliant language, bawdy humor, and vivid characters; it also bears relevant satirical messages about war and the corrupting power of lust. As Sullivan's competent but not especially memorable revival demonstrates, though, these disparate qualities aren’t enough to overcome a production whose most distinctive scenes belong in a Rambo movie.