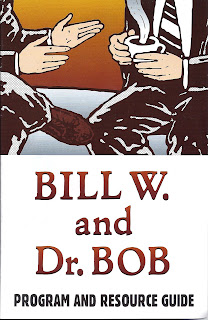 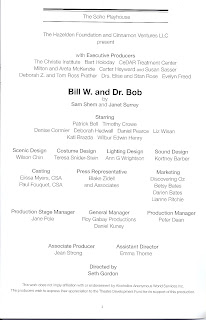 During the 19th century, temperance dramas were among the most widely attended products of the American theatre, their mission being to warn potential and current drinkers about the evils of alcohol. Plays like THE DRUNKARD (1844) and TEN NIGHTS IN A BAR-ROOM (1858) packed them in, and many plays, books, and movies since then have demonstrated, both artistically and didactically, how easy it is for the mighty to crumble once they’ve fallen into the clutches of John Barleycorn. Where would the modern theatre be without a steady supply of plays like THE ICEMAN COMETH and THE COUNTRY GIRL?


BILL W. AND DR. BOB, now playing at the Soho Playhouse, while having definite artistic qualities, is unapologetically didactic, being a biographical piece explaining how two determined alcoholics, Bill Wilson, a New York stockbroker, and Dr. Robert Smith, an Akron, Ohio, physician, met one another and founded the program that became Alcoholics Anonymous. The harrowing nature of each man’s personal hell is vividly enacted in scenes that bring to mind those old time temperance melodramas, but their power is that much stronger because it surely reflects the reality of so many other topers. After all, a large portion of the audience at each performance is made of up of those who’ve experienced just what Bill W. and Dr. Bob went through. When the play begins, the actors playing Bill (Patrick Boll, looking like he stepped out of a 1930s magazine ad) and Dr. Bob (Timothy Crowe, resembling the pitchfork farmer in Grant Woods’s “American Gothic”) are spotlighted on a darkened stage, and when Bill says the first words, “My name’s Bill and I’m an alcoholic,” there is an immediate shouted response of “Hi, Bill.” Ditto Dr. Bob’s admission of the same. This is an audience that won’t be easy to fool. The warm response at the play’s end is proof that what these people saw rang true. 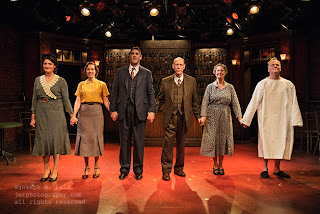 
BILL W. AND DR. BOB was written by a doctor, Sam Shem, and his psychiatrist wife, Janet Surrey, both with extensive experience working with alcoholics and addicts. It is a well-researched tale set largely in 1934, when Bill, in Akron on a business trip, realizes that his recent struggle to remain sober is about to collapse. Believing the only way he can succeed is to speak to another drunk, Bill makes a series of desperate calls that eventually lead him to Dr. Bob, a surgeon whose own booze-sodden life is coming apart. The play recounts the difficulties these visionaries (both originally from Vermont and both readers of William James) faced in forming an alliance and overcoming their own dependencies, and their efforts to find someone on whom to test their convictions. One major idea they share is that alcoholism must be treated as a disease. Suffering as well are their devoted wives, Lois Wilson (Denise Cormier) and Anne Smith (Deborah Hedwall, my favorite), whose love and support endure rocky times but rarely falter. Various other characters in the story are played by only two actors, Daniel Pearce and Liz Wisan. The acting sometimes turns melodramatic, but  it is generally focused and strong enough to maintain interest in this gripping true-life story.


Wilson Chin’s oak-paneled set shows us an upstage wall fully stocked with liquor bottles, with a bar downstage of it. The bar can be moved and turned on its side to convert it to a bed for bedroom and hospital scenes. A few pieces of furniture are brought on and off for scenes set elsewhere (necessitating the use of annoyingly visible stagehands). Ann G. Wrightson’s evocative lighting dramatically emphasizes the presence of the bottles during several scene transitions, which also make good use of Kortney Barber’s period music sound design. Teresa Snider-Stein’s costumes make a major contribution to capturing the authentic feel of the 1930s.


The playwrights began their work on this project twenty-seven years ago, and their play has been produced, they say in the program, “around the world, in hundreds of sold-out productions.” The story it tells is an inspiring one and its presentation is solidly effective; despite the somber subject matter, there are some loud laughs here and there. One of the playwrights’ goals is education, and we do learn a great deal about the history and development of treatment for alcoholism. The role of spiritual values, even for nonbelievers (like Bill), is particularly interesting. But an important reason that the information gets across is because of Seth Gordon’s sensitive staging, which makes the play’s messages theatrically engrossing.

A prime producer of the play is the Hazelden Foundation, which will use the net proceeds to support a college tour of the show (hopefully having an influence on campus binge drinking), and for other important addiction-related purposes.


At two hours (with a ten-minute intermission), the episodically structured play does begin to drag after a while. Perhaps the scenes depicting Lois and Anne’s hardships could be shortened, but the play’s principal audience will likely appreciate these. After all, to defeat the beast the support of loved ones is absolutely essential, and those who attend will surely go with those closest to them.  I’m sure that many will find the play moving and informative, regardless of how tenuous their connection to its central issue. To paraphrase a popular slogan from the 1960s, you don’t have to be a lush to love BILL W. AND DR. BOB.
Posted by Samuel L. Leiter at 4:49 PM