79. Review of SUMMER SHORTS SERIES A 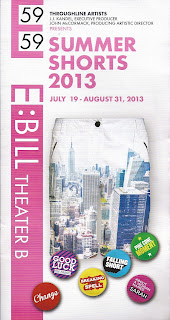 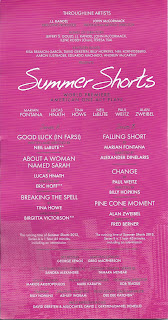 Having been barely impressed last week at the program of three one-acts called SUMMER SHORTS SERIES B, I returned to the fray at 59E59 hoping that SUMMER SHORTS SERIES A would be a step up from B’s middling offerings. As a program, A did prove slightly superior; it's still middling, just a higher grade of middling.


Best of the night is the first piece, “GOOD LUCK (IN FARSI),” written and directed by Neil LaBute, which should have an afterlife as acting class material because it gives two actresses a great chance to show off their comedic skills. The scene is an audition room where two stunners are preparing to try out for the role of a beautiful CIA operative on a new TV series. As played by Elizabeth Masucci, Paige is a brunette knockout with her hair demurely coiffed in a bun, but with a sensational body topped by an impressive rack whose advantages and disadvantages she considers. She has an experiential edge over the other actress, Kate (Gia Crovatin), in that she once appeared in a flop series that filmed six episodes, only several of which actually aired. Kate, who reminds the woman (Molly Logan Chase) managing the audition that it’s “Kate with a T,” is a statuesque blonde, with an equally smokin’ body (displayed in a skintight, blue mini-dress that shouts, "look at me!") but with less happening in the thoracic department. Not to worry, since the escalating rivalry between the actresses leads to a moment when Kate is alone and, helped by a LaBute sight gag, puts mum to the mammary competition.


The actresses are desperately eager to get the job, but while both are shallow airheads (neither can figure out how much half of one half is), they are keenly aware of the need to find an edge over the competition; this inspires a series of amusingly bitchy maneuvers by each to befriend the other while simultaneously digging their grave. One involves the need to speak some lines in Farsi, which Kate claims to have studied with the help of Rosetta Stone; she generously offers to help Paige read the Farsi dialogue ("the key to Farsi is spit"), her intention, of course, being to sabotage Paige’s audition. She therefore writes out nonsense words that the gullible Paige comically struggles to practice before she enters the audition room and meets her doom.


There are some genuine laughs here, and both actresses combine sensational looks with waggish skills that make this fast-paced, upbeat work both fun to look at as well as hear. I especially liked a sequence when the women discuss how ordinary-looking parents can produce beautiful offspring (both women love talking about how gorgeous they are and how it can be a drawback). Kate says at one point, talking about her parents, that "there's something about the two of them together and here I am--BAM!"  LaBute’s satiric take on the place of beauty in our culture and entertainment retains his well-known sharpness. I’m aware that some feminist critics complain about his misogyny, but I've always found him an equal opportunity satirist.


The balmy comic air of "GOOD LUCK (IN FARSI)" grows a tad heavier in Lucas Hnath’s "ABOUT A WOMAN NAMED SARAH," a snarky shot at Sarah Palin’s expense, directed by Eric Hoff, in which she is shown being considered as John McCain’s 2008 running mate. It's divided into four scenes set at McCain’s Arizona ranch, one between McCain (Mark Elliot Wilson) and Sarah (Marisa Viola); the next between McCain and his wife, Cindy (Stephanie Cannon); the next between Cindy  and Sarah; and the last between Sarah and her husband, Todd. During her interviews, Sarah learns that she is the only option McCain has as everyone else has turned down the offer, she being eighth on the list; no offer has been made to Mitt Romney because McCain thinks him "a shitty person" and
"too douchey.” Cindy strongly objects to Sarah being selected, telling McCain he'll look stupid next to her, but he goes ahead and offers her the job. The commonsensical Todd, thinking she has no idea of what she’ll be getting into, tries to dissuade her, but she is too determined to make something special out of her life, and resists his arguments, including his insistence that she’ll make a fool of herself: she reassures him that she’ll have flashcards.


Much of the dialogue is written in short and disconnected sentence fragments delivered in a dryly staccato manner constantly interrupted the crack of a clapper, which, because it has no apparent meaning (like the buzzing in David Ives's ALL IN THE TIMING), gradually becomes very annoying. It almost seems that this is a performance choice dictated by a desire to somehow make the deliberately banal dialogue take on an air of satiric significance, but the play offers little more than something Palin haters will adore as one more chance to slap her around; it certainly offers few ironically enlightening insights into her personality. None of the actors does anything to overtly impersonate the real people they’re playing; McCain is performed by a distinguished-looking actor with a full head of silver hair, the striking Cindy by an actress whose similarity to the original is simply that she’s blonde, and Todd by a young man with a mustache. Since Marisa Viola's Sarah doesn’t copy her distinctive speech patterns, the piece misses the yeast that made Tina Fey’s characterizations rise to the heights of hilarity on SNL. Anyone who saw Fey (or even Julianne Moore’s more realistic impersonation in GAME CHANGE) will realize that nothing can ever replace those unforgettable replications, or, even more, the thing itself; that, on its own, is its most ridiculously funny iteration.


Following the intermission comes the heavy air of “BREAKING THE SPELL.” Since this painfully unfunny piece of fairytale folderol, filled with linguistic and physical nonsequitors, and based on the sleeping beauty story, is by the redoubtable Tina Howe, I must fight the impulse to dismiss it out of hand. Ms. Howe is so talented and the play so bad, I take responsibility for missing whatever values it presumably has, risible or otherwise, but I do wonder whether, had it come from a less respected author, it would have been inflicted on an audience at 59E59.


Michael Countryman plays the King, whose daughter Christabel (Crystal Finn) is under a curse that has kept her sleeping for 100 years. He’s tried everything to wake her, including having her kissed by thousands of princes, princesses, and assorted oddballs. She lies there, partly hidden, on a stage whose shabby white draperies are supposed to represent cobwebs, while he and his gibberish-spouting Poor Wretched Fool (Evan Shinners) ponder their dilemma as the deadline for waking her comes ever closer. The hapless monarch gets the idea to try music, and soon we have a Scottish-accented, jazz-playing sax player (Jesse Scheinen); a German pianist who offers a Bach concert (Mr. Shinners); and an accordion-playing  California dude from Marin County. At one point we get a cacophony of sound as hard to listen to as the dialogue of this would-be farce. Finally the princess awakens, struggles with her balance and use of language, and rediscovers happiness.


I envy those who actually found something to laugh at in this childish effort; it would have made the time pass faster.  “BREAKING THE SPELL” should be put to sleep for 100 years.
George Xenos designed each of the simple settings, the serviceable lighting is by Greg MacPherson, the low-budget but appropriate costumes by Sandra Alexandre, and the sound design by Marios Aristopoulous. Score: A- for "GOOD LUCK (IN FARSI)," C+ for "A WOMAN NAMED SARAH," and F for "BREAKING THE SPELL."
Posted by Samuel L. Leiter at 9:46 AM