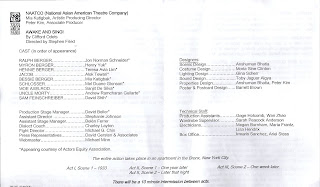 Do you remember how surprised the judges were the night that Susan Boyle began to sing as a contestant on BRITAIN’S GOT TALENT? Here was this extremely unprepossessing woman who, the moment her voice began emitting the sounds of “I Dreamed a Dream” from LES MISERABLES, instantly converted skeptics into believers. I experienced a modest version of that feeling last night when the actors in a downtown revival of Clifford Odets’s socially conscious 1935 masterpiece AWAKE AND SING began to speak. I admit having gone with a cynical sense that I was going to see something bizarre, an Asian-American theatre company (the National Asian American Theatre Company), doing a play about a Jewish family in the Depression-era Bronx, living in a cramped fifth-floor walk-up, and furiously confronting the issues of capitalism and Marxism, as well as various domestic and romantic problems. It wasn’t so much the subjects of conversation or the way families interact that raised my doubts, but rather how American actors from such different ethnic backgrounds could be believable in this world. For one thing, apart from their looks, how would they capture the sounds and inflections associated with that period? Odets’s dialogue is meant to sing with the immigrant-influenced melodies of the Bronx’s colorful streets, which can still sometimes be heard in New York-based gangster flicks of that era. But no sooner did the Berger family, seated around the dining room table, begin to bicker and fuss, than the voices of 1930s working-class New York Jews came pouring forth from actors with faces and names suggesting China, South Asia, and places indeterminate. And soon, even their appearances, despite a plethora of racial origins, were transformed into those of the Berger family of 1933 (when the play is set), whose antecedents probably came from Central or Eastern Europe.

The actors in this company do not share a single ethnicity, and indeed some actors probably possess multiple backgrounds (if the name Jon Norman Schneider is any indication). The point, however, is that, while you never forget for an instant that you are seeing actors who are clearly not what Odets had in mind, their full-hearted grasp of his characters and intentions soon makes you marvel at how universal theatre can be when well performed, regardless of its ethnic origins. Will we one day, do you think, see a non-Asian cast tackle, let’s say, a play by David Henry Hwang? Or, what would be equally politically incorrect in 2013, a non-black cast in a play by August Wilson?


As I noted in my Encyclopedia of the New York Stage: 1930-1940,  AWAKE AND SING, whose title comes from a passage in Isaiah 26:19, “Awake and sing, ye that dwell in dust,” is a propagandistically inclined work in its implied criticism of the capitalist system and its depiction of the problems of Jewish assimilation to an alien culture, but its success has long been attributed to the rich humanity of its characters. It is set among the squabbling members of the Berger family, a poor three-generation tenement household beset by the typical economic problems associated with the times. Hennie Berger (Teresa Avia Lim) loves disillusioned, one-legged racketeer and WW I vet Moe Axelrod (Sanjit De Silva), although she’s married to the pathetic Sam Feinschreiber (David Shih); the marriage was arranged for the sake of the family’s reputation by Hennie’s demanding mother, Bessie (Mia Katigbak), because of Hennie’s pregnancy by an unnamed lover. The kindly, cultured grandfather, Jacob (Alok Tewari), a Marxist barber, is opposed to the couple’s hypocritical nuptials. Hennie eventually runs off to live with Moe. Another thread follows the problems of the rebellious young son, Ralph (Mr. Schneider), whose romance with a poor orphan girl is frowned on by Bessie. He, too, finds sympathy from the old man, who always reminds him that “life isn’t found on dollar bills.” Toward the end, Jacob kills himself so Ralph can inherit his insurance money and awake and sing.


This is a difficult play to cast even with actors whose ethnicity matches that of the characters, but the NAATCO’s troupers do a strong job of confronting the problems. Rather than transpose the play into a world less specifically 1930s Bronx-Jewish, director Stephen Fried has had his company strive to snare that world’s behavioral and speech patterns. While some are more successful than others, they nonetheless offer a no-frills reading of the play that communicates in terms that are never less than clear and compelling. Unlike the 2006 Broadway revival, with its technically complex scenic conceit, this low-rent version's set is perfectly acceptable: the audience of around 50 sits on either side of the rectilinear space, with a bedroom behind the wall at one end, and the kitchen and other rooms offstage behind an archway at the other. The action takes place around the dining room table and on some living room furniture. Furthering the general feeling of authenticity are Moria Sine Clinton's period costumes.

Sanjit De Silva makes a handsome and believable Moe, although he tends to push too hard for such a tiny space. His limp, too, could be more consistent. Mia Katigbak is a convincing Bessie, a struggling housewife wanting to do what she thinks is best for her family yet forced into actions that sometimes make her a monster. Jon Norman Schneider’s Ralph, while not as charismatic as actors who have played the role before (John Garfield originated it), is earnest and sincere, while Teresa Avia Lim’s Hennie is attractive in an everyday way and her responses to the world in which she is trapped are always credible. Alok Tewari’s grandfather, who uses a slight Yiddish accent, seems a trifle young for the part, even with his gray beard, while Andrew Ramcharan Guilarte overdoes some of Uncle Morty’s mannerisms. Henry Yuk offers a sympathetic Myron, Bessie’s pliable husband, but David Shih’s Yiddish-accented schlemiel of a Sam Feinschreiber comes off too much like a refugee from FIDDLER ON THE ROOF.


The nontraditional casting of this AWAKE AND SING demonstrates that the play remains strong and worthy of revival, regardless of its actors’ backgrounds, and also that the NAATCO has the talent and imagination to step out of the box and undertake revivals that expand their artistic vistas. Dumplings and kreplach can make beautiful theatre together.
Posted by Samuel L. Leiter at 12:53 PM