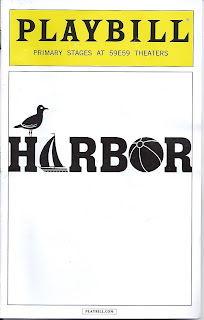 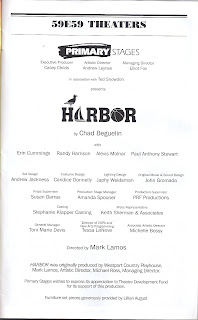 As entertaining in a familiar way as is Chad Beguelin’s new dramedy, HARBOR, at 59E59, it only occasionally rings true, and seems uncomfortably close to being a sit-com setup.  Its plot concerns a gay couple living seemingly perfect lives (including a hyphenated last name) in an upscale Long Island town when they are disrupted by unexpected interlopers. (It’s another example of THE MAN WHO CAME TO DINNER syndrome, seen earlier this season in ME AND JEZEBEL.) Kevin (Randy Harrison), who has been trying for ten years to write a novel but struggles even to write a promotional brochure, lives with his husband, Ted (Paul Anthony Stewart), in a “birthday cake” of a house in beautiful Sag Harbor on the North Shore. Ted is a successful architect, although his business has been off recently, and it is his money (whose color is replicated on the walls of their tastefully appointed living room, designed by Andrew Jackness) that keeps Kevin free to imagine he’ll one day succeed at finishing his book. Ted controls the purse strings and also the aspirations of the docile Kevin, who discovers in the course of the play a yearning he never fully realized was there. 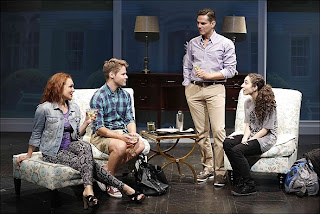 
This discovery is precipitated by the surprise appearance of Kevin’s promiscuous, white-trash sister, Donna (Erin Cummings), a dyed redhead in skintight, rocker-type duds (thanks to costume designer Candice Donnelly), who drives up one summer day in an old van accompanied by her precocious 15-year-old daughter, Lottie (Alexis Molnar), a kid whose current reading is Edith Wharton’s HOUSE OF MIRTH. Lottie lives in the van with her mother; as she says, her broad knowledge of literature and life is the result not of home schooling but of “van schooling.” Donna’s feeble attempts to talk like a hip teen, such as using the word “biatch,” are constantly ridiculed by her embarrassed daughter. These “semi-homeless” wanderers show up because Donna is pregnant and, as eventually revealed, wants Kevin and Ted to adopt the baby, who she feels totally incapable of raising. She also hopes to get a gig as a $30,000 a year singer on a cruise ship, a dream as unlikely to occur as her brother’s finishing his novel.


The kicker is that Ted is totally, unequivocally opposed to having kids, whom he views as Petri-dish breeding grounds for biological disaster, while Kevin finds that he has an inner longing to be a daddy (actually, he says, a mommy), and the manipulative Donna uses all her cunning to fan whatever sparks the dilemma has created. At the same time, the tension between Donna and Lottie, who desperately wants a chance at a “normal” life, grows more intense, especially after Ted discovers an unforeseen fondness for this teenage whiz kid (Donna says, “She’s like Asian smart”); he even tracks down the phone number of the father she’s never met in Champagne-Urbana, Illinois, spurring a phone call by Lottie that provides the two-hour play’s most touching moment.


The problem of gay couples adopting a child is often in the news, but, as depicted here, Kevin and Ted’s response to the issue is not much different from how a straight couple with opposite views might react to the same situation. What differs is the opportunity it gives the playwright for some brutally cutting sarcasm (mainly from Ted) at the expense of privileged straight parents and their obsessive preoccupation with the specialness of their babies; that is something he believes he and Kevin will, thankfully, never have to deal with as they spend their time living the good life of travel and good booze.


Chad Beguelin’s dialogue is shot through with conventional gay-inflected lines, some it self-deprecating, hardly any of it surprising. Because Donna is so outspoken, she thinks little of making tasteless wisecracks about gay sex.  It is Lottie, however, who refers to the town where Kevin and Ted live as “Fag Harbor.” Yikes. People often spout lines that seem to come from the writer’s need to slide in a zinger at regular intervals; many come off as anything-for-a-laugh attempts rather than organic comments grounded in character and situation. Ted, telling Kevin he’ll never succeed at being a writer, says of Kevin’s work-in-progress: “A cookbook by Hitler would have a better chance.” Or, in a line you might expect to hear on the Borscht Belt, teenager Lottie remarks: “I’ve seen so many assholes I could be a proctologist.”  Donna, who can be verbally deft, can also display unconvincing ignorance, as when she remarks that she used to think a misogynist was someone who gave massages. Da da boom. And I wonder how many people get some of the dated references, such as the one to Charles Nelson Reilly. Weed (which Donna is somehow able to afford despite being broke) and alcohol help spur much of the talk.


The situations often seem contrived merely to motivate a confrontation, and arguments sometimes spring up like Jack-in-the-boxes when there’s a need to step on the playwriting gas. The light comedy atmosphere of the first act morphs into more serious territory in act two, especially after Ted makes clear just how immature and dependent on him he thinks Kevin is, and there is an interesting conflation of issues at the end that is resolved by the play’s sole surprising twist, which may or not convince you.


HARBOR is effectively staged by the dependable Mark Lamos, and most of the performances are lively and well-honed, although I thought Randy Harrison (of TV’s “Queer as Folks”) on the bland side. The technical components of scenery, lighting (Japhy Weideman), costumes, and sound (John Gromada) do what they need to, and the overall production is of high quality. HARBOR will entertain you, but, even if you've never been to Sag Harbor, you may nonetheless feel you’ve been here before.
Posted by Samuel L. Leiter at 8:07 AM