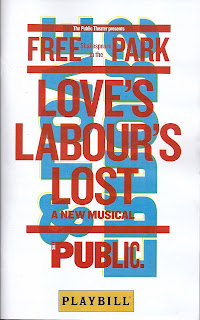 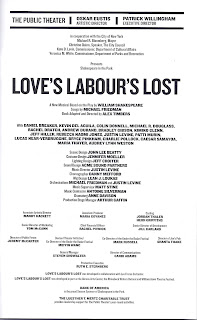 A gorgeous, balmy summer night at Shakespeare in the Park. Great seats at the Delacorte to see one of Shakespeare’s less frequently produced romantic comedies. The audience abuzz with anticipation as it sits under the stars examining John Lee Beatty’s sumptuous setting of a lakeside resort, with a large “lodge” to the left and a “cantina” to the right (where the orchestra is ensconced), a lake upstage amidst the trees, and a circular patio downstage with lounge chairs, a hot tub, and tiny wading pool. The occasional interruption of helicopter blades circling overhead. It’s one of those blessed moments in New York life when you thank the heavens there was someone named Joe Papp, who gave the city this gift that has kept on giving for over half a century. The stage lights come up and the play begins. . . Wait a second. Something’s missing. Of course, you know what it is. It’s Shakespeare! Instead you’ve been given Shakespeare for Dummies. You even wonder why the playbill cover isn’t printed in yellow and black!


Of course, if you search closely enough, you’ll discover Shakespeare himself in some of the interstices tying the show’s 21 songs together, but this 100-minute, intermissionless reduction of the Bard’s comedy prefers to tell the story more through its music and satirical lyrics than its dialogue, which wouldn’t be so bad except when those lyrics descend to the level of “I had a fling with the king.”


For reasons that remain vague, the play is set at a lodge that, when we first see it, has a welcoming banner slung across it saying “Welcome back Class of 2008! Windsor Apartments and Resort.” What a class reunion has to do with LLL escapes me, but that is little compared to the hodge-podge of comic ideas that run helter-skelter through the usually splendid Alex Timbers’s adaptation, which he also directed. Some bits, like butter patties thrown on the ceiling, stick momentarily, but most fall quickly with a splat. Yes, the audience seems to have been eating it up, and yes, there was a standing ovation at the end, so I had to pull in my antennae and cover my slobbering fangs so no one would see the alien in their midst.
The basic story, you may recall, concerns the youthful King of Navarre (Daniel Breaker), who convinces his three companions, Berowne (Colin Donnell), Longaville (Bryce Pinkham), and Dumaine (Lucas Near-Verbrugghe) to give up women for three years and to spend the time studying, contemplating, and fasting. But when four hot-to-trot chicks—the Princess (Patti Murin), Rosaline (Maria Thayer), Maria (Kimiko Glenn), and Katherine (Audrey Lynn Weston)—arrive, pheromones do battle with philosophy, and the conclusion is foregone. Along the way, there are clowns, fools, and pedants to help enliven the atmosphere, and, aside from a shift in tone near the end when news arrives of the death of the princess’s father, the mood remains high-spirited and clever. Shakespeare’s original is known for its tricky language, but that problem has been avoided here by simply ejecting the more arcane speeches and substituting updated language (“bromance” makes a visit) and contemporary references (Papa John’s, for one). I don’t need to go back to Shakespeare’s script to verify that he never said, “blow me,” or “I don’t know what the fuck that means.”


So we have Constable Dull (Kevin Del Aguila), in shorts and helmet, on a Segway; Holofernes (Rachel Dratch) the pedant being played by a tiny woman with no linguistic concessions to her gender; Costard (Charlie Pollock) turned into a surfer dude; a production number in which Longaville and a chorus of cupids (and others) parody A CHORUS LINE, with his clothes transformed into a silver sequined vest and shorts, with backwards baseball cap to match; a full-scale high school marching band; entrances and exits on a golf cart; Shakespeare’s Muscovites changed to a troupe of East German performance artists, and on and on. Oh, I must note that, as in a growing number of recent shows, someone is pulled out of the audience to participate in the action; this always manages to be popular but its overuse betrays it as a cheap trick. One can envision Mr. Timbers during rehearsals, whenever a light bulb popped on in his cranium, saying, “Hey, wouldn’t it be fun if we tried . . . ,” with no one forthright enough to offer, “Uh, no.” 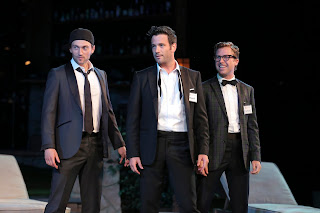 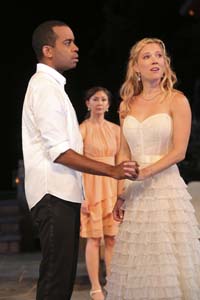 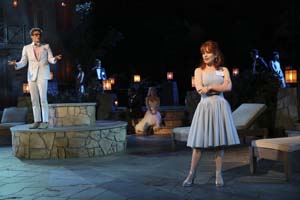 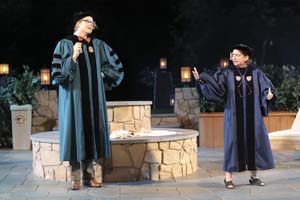 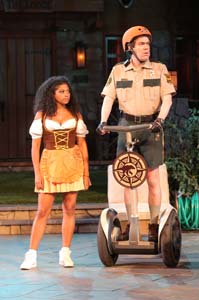 Certainly, some of those butter patties can be amusing, and some of the songs do click. The onstage talent, as always with park productions, is abundant, and capable of making even shows as frenetically sophomoric (a word offered by a critic friend) as this one bearable. Worth singling out are Colin Donnell as the reluctant Berowne, whose good looks and acting and singing chops make him a perfect match for the redheaded Rosaline, played with spunky charm by the delightful Maria Thayer. Daniel Breaker as the king is fine, as is the multitalented Patti Murin, playing the princess. Rebecca Naomi Jones makes a pertly appealing and full-voiced Jaquennetta, but Caesar Samayoa as her would-be lover, the Spaniard Armado, nearly deflates the proceedings with his campy shouting and cavorting. Rachel Dratch and Jeff Hiller, whose parts as Holofernes and Nathaniel are greatly reduced from the original play, are humorous chiefly because of the disparity in their sizes and their vocal and facial mugging; nothing they do with their lines is especially rib-tickling.


The songs are in a variety of contemporary styles, many being narrative-driven and melody-deprived, intended mainly to move the story along. A few are of the stand-alone variety, such as Moth’s (Justin Levine) “I Love Cats,” which, like some of the show’s shtick, has very little relation to the story, but gets some amusement out of lyrics like “You’re going to be making a beeline for anything feline.” Well . . .  There is a good satiric song called “Rich People,” which shreds the wealthy classes, and includes a self-referential crack about how those with money pay for better seats at plays that should be free (Shakespeare in the Park is mostly free, but those with deep pockets can pay for quality seats). Jaquennetta has a fine number called “Love’s a Gun,” delivered in semi-torch style, and there’s a boy band takeoff by the king and his buddies that works well for “I’m the One.” It comes out of nowhere, but “The Tuba Song,” which brings on the marching band, rouses everyone just before the news arrives of the death of the Princess’s father.


Jennifer Moeller’s many costumes, ranging from the realistic to the bizarre, work as well as anything else in this mélange of comic madness, even when there seems no rhyme or reason for some of them, as when Dumaine and two supporters appear dressed in Elizabethan garb. Jeff Croiter’s lighting provides the kind of romantic magic we’ve come to expect under the Central Park stars; a lovely effect is the lantern-lit gondola that floats by on the lake at the show’s conclusion.


As I walked away from the theatre toward Central Park West, a woman alongside me, obviously on a cloud and seeking someone to share it with her, asked me what I thought about the show. I said I was disappointed. Oh, she wondered, was it because of the raunchy language? No, I said, it was because of the overly broad, forced humor. That quieted her and she didn’t bother to respond. While I can’t encourage you to see the show, I can vouch that many others felt as she did. For me, though, this was a lost opportunity at a labor of love.
Posted by Samuel L. Leiter at 8:49 PM