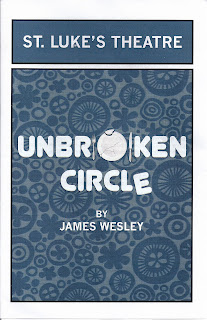 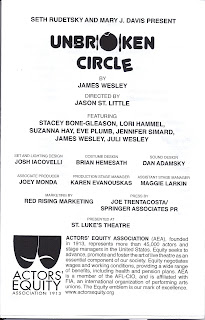 Compared with last year, very few new shows have been opening this summer, apart from those given brief runs at the local theatre festivals. One of these new shows, UNBROKEN CIRCLE, by James Wesley, actually opened in June, but I caught up with it only last night. It’s playing at St. Luke’s Theatre, which, as the photo below reveals, is home at any one time to several works, each of which runs only a few times a week, and it sometimes takes a bit of time before one of them has enough performances to show up on the radar. A quick perusal of the available reviews reveals that it has received mostly positive responses from the half-dozen or so critics who have written about it, including someone from the New York Times. It was praised for its well-executed plot, its shocking revelations, its potent blend of comedy and drama, its emotional power, its thought-provoking content, its colorful characters, and its strong acting. References were made to how it was reminiscent of Tennessee Williams’s plays, or, more specifically, to Tracy Letts’s AUGUST: OSAGE COUNTY. So I went with some curiosity about why a play whose only negative criticisms were relatively minor seemed to be generating so little excitement. In fact, there were only around 30 people in the house when I saw it.  The playwright-star even felt it necessary during the curtain calls to ask the audience to help spread the word. 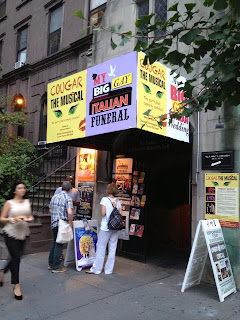 
Leaving Williams aside, one can certainly see why the Pulitzer Prize and multiple Tony Award-winning AUGUST: OSAGE COUNTY was referenced, as that play (soon to appear as a major motion picture) tells the story of a family crisis that brings the family members back to the house in which most of them grew up and to the sharp-tongued matriarch who rules the roost. Her husband’s disappearance  has temporarily brought the family back together. His death is soon discovered and, following his funeral, the family engages in various confrontations, one of them violent, and the shedding of secrets. There are scenes of excessive drinking, inappropriate sexual behavior by an adult toward a minor, the reading of a will, sibling rivalry, and so on.


Apart from the husband’s disappearance, this could be a crude description of UNBROKEN CIRCLE, which takes place in Galveston, Texas, in June 1970, and shows what happens when a family converges on the home of Ruby (Suzanna Hay), the tart, white-haired matriarch, for the funeral of her despised husband, Travis, after his sudden death. Already living there, rent-free, are her middle-aged son, Bobby (James Wesley, the playwright), his wife, Cheryl (Lori Hammel), and their daughters, the conventionally rebellious (but generally well-behaved) 18-year-old Cathy (Stacey Bone-Gleason), and their chipper 12-year-old Patti (Juli Wesley, understudied by Danielle Strauss at the performance I saw). Bobby is glad to have a new job as a bus driver, but he has not had much success keeping his previous jobs. He also is reluctant to let Cheryl work. Arriving from Austin is Bobby’s better-off sister, Edna (Jennifer Simard, replacing Anika Larsen beginning on August 7), who is up for a position in the new Lyndon B. Johnson presidential library, and who hasn’t been back to the family abode in 25 years. Then there is June (Eve Plumb, who played Jan on TV’s “The Brady Bunch”), Ruby’s sister visiting from Oklahama. June is a bible-thumping, right-wing, born-againer taking classes at Oral Roberts University and with a holier-than-thou attitude toward everyone else, despite her own un-Christian frailties, including a drinking habit and a extramarital affair. 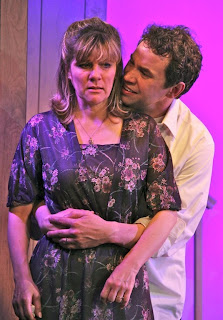 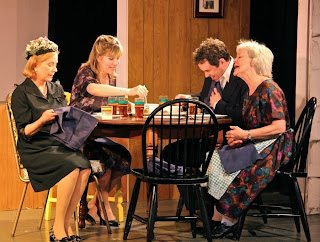 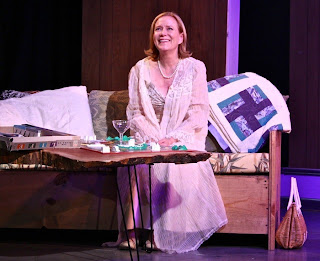 Like so many plays about the aftermath of a death, the contents of the deceased’s will become a major plot fulcrum. By making June a bothersome pest whose chief purpose in rejoining her family is to hear the will read because she expects the house to be left to her, Mr. Wesley creates a melodramatic set up that is bound to make June unhappy. His presentation of her as a zealously pious proselytizer is another indication that we’re going to learn she’s not all she makes herself out to be. But the hoariest skeletons in the closet turn out to be about the late, unlamented Travis, and his history of abusive behavior, especially where children are involved, and how his awful behavior has presumably affected his son, Bobby. A lot of hysteria is expressed about his fondness for Patti’s panties, but, despite all the emotional hullabaloo this causes, any danger he represented to Bobby's daughters seems to have lain more in the realm of potentiality than actuality.


UNBROKEN CIRCLE begins as a textbook exercise in traditional kitchen-sink drama, if you will, that gradually crosses the border into melodramatic contrivance, with a series of late-in-the-proceedings admissions and emotional eruptions that, while acceptably performed, fail to ring true. Bobby’s behavior, especially, seems increasingly forced, as when he accuses his wife of wanting to go back to school as a step toward her leaving him, or when he raises his hand toward Cathy. And having him overhear important information as he stands outside the screen door is soap opera hokum par excellence.


Not helping much is Josh Iacovelli’s unappealing, awkwardly designed set, forced to make concessions to the limitations of St. Luke's cramped and low-ceilinged stage. It shows a living room couch at stage right (a strange piece of furniture that looks like it was homemade from leftover scraps of wood) and a dining area at left, near a screen door leading outside. Upstage is a blank wall with steps going upstairs. At extreme down right is a bedroom area. When characters leave it they are forced to reappear by coming down the upstage stairs. The kitchen sink, upstage of the dining area, is separated from it by a section of wall, but seems to be part of the living room, and it only becomes clear very gradually that the kitchen is supposed to be walled in. When characters in the kitchen go to the dining area they exit at the left and come right back on into the dining area below. There is one particularly annoying sequence when the characters keep going back and forth like this. The open area to the right of the kitchen, where the living room is, would allow them to do this in full view, but, of course, we are supposed to grasp that there’s a wall there preventing this.


Jason St. Little’s direction is likewise problematic, especially in the way he handles exits, entrances, and scene transitions whose timing is often sloppy. The final moment of the play is botched when the tag line is mumbled and the lights suddenly fade, leaving the audience to wonder whether or not the show has ended before it begins its applause.


The acting, with its approximations of what are presumably country-style Texas accents giving the performance a Southern Gothic feeling, is buoyant enough to keep the play afloat, but none of the actors give breakout performances. Eve Plumb is a colorful June, although she stumbled once or twice on her lines. Suzanna Hay has the makings of a sharp-tongued Ruby, but I’d prefer her to tone down some of her more “dramatic moments,” which sometimes seem actorish. Mr. Wesley is generally likable and honest as Bobby, but his shouting scenes tend to be excessive. Everyone else is professionally competent and serves the play well.


The play itself, however, while demonstrating that Mr. Wesley is a promising playwright, seems too familiar and contrived to break any new ground, especially when the ground it’s going over is so old.  A circle of abuse going round and round within a family is certainly viable stuff for dramatization. UNBROKEN CIRCLE presents the problem but fails to do much with it.
Posted by Samuel L. Leiter at 6:07 PM