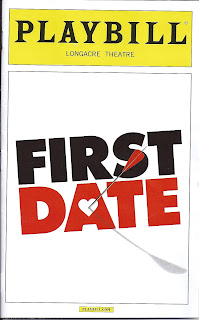 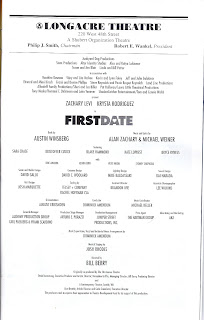 I haven’t had a first date since Eve asked me if I’d like to share an apple and a glass of cider in the local orchard, so the only way I was going to know if the new Broadway musical, FIRST DATE, at the Longacre, was anything like the real thing was if I went with someone actually in touch with the dating scene today. Consequently, my date was my beautiful 21-year-old granddaughter, Briar Autumn, who not only laughed loud and often, but also later declared that the show was certifiably on target when it came to reflecting the current dating game; she did wonder, though, whether an older generation would appreciate all the references; speaking for myself and not my fellow members in decrepitude, I answered in the affirmative. The rest of the audience was having such a terrific time that I began to overlook some of the show’s more clichéd and commonplace elements and let myself enjoy it for what it was. 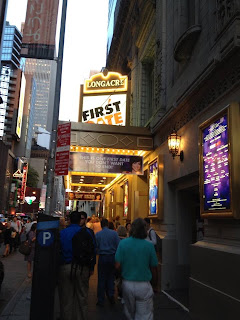 
What was it? A musical sitcom (book by Austin Winsberg, a “Gossip Girls” writer), brightly staged by Bill Berry, about a shy, bespectacled Jewish guy named Aaron (Zachary Levi, of TV’s “Chuck”), bordering on nerdiness (funny but forced) and still recovering from being jilted at the altar by the seriously gorgeous (but horribly ball-busting) Allison (Kate Loprest, seriously gorgeous, and hopefully not ball-busting), who is fixed up on a blind date (his first ever) with his complete opposite, Casey (Krysta Rodriguez, of TV’s “Smash”). She's a cocky, artsy, miniskirted, downtown fox with a Chinese symbol tattooed on her wrist, a mouth butter wouldn’t melt in, and a thing for bad boys. She calls him a BDV (Blind Date Virgin) and he, suffering a serious lack of mouth control, responds by dubbing her a BDS (Blind Date Slut), among other unconvincing verbal gaffes he's prone to utter. Although the show begins with the ensemble singing “The One,” a satirical stab at online dating, Aaron and Casey’s get-together is the matchmaking brainchild of Casey’s happily married sister Lauren (Sarah Chase) from middle-class heaven in Westport, CT. Casey, however, despite her outward show of toughness and sarcasm, is really afraid of being hurt, so she affects a snarky attitude that belies her true nature; we eventually learn she’s a devotee of Eckhart Tolle. As the date nears its conclusion, following a chain of comical on-again off-again romantic developments, Aaron reveals a maddeningly contrived personal story about his mom (“The Things I Never Said”) that brings out Casey’s “sensitivity,” and pretty soon we’re headed for—surprise—a second date! 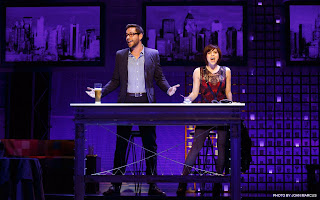 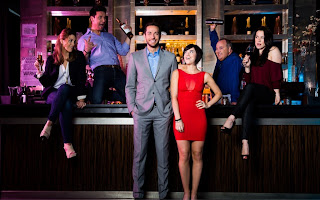 
Except for the final number outside a subway station, the entire date takes place in 95 intermissionless minutes set in a cool New York restaurant presided over by a comically wise, overweight gay waiter (Blake Hammond, very good). (You may recall that this is almost precisely the set up in FALLING SHORT, the first one-act in SUMMER SHORTS SERIES B on which I reported recently.) As the cynical Casey, an aspiring photographer, and the geekily clumsy Aaron (in corporate finance, investment counseling, etc.), stumblingly get to know each other, the waiter joins an ensemble of four others (most of whom play multiple roles) who periodically interrupt the proceedings to comment on them in often entertaining song and dance. For example, during an early conversation Aaron and Casey are discovering that they know a number of the same Jewish people ; suddenly, Casey drops the bombshell that she’s not Jewish and BANG!—everything stops, the lights change, and the ensemble dons Hasidic gear to launch into “The Girl for You,” a broadly farcical but groaningly familiar routine about what a horror it would be if Casey and Aaron married. Aaron’s dead grandma even joins to sing lyrics that shout, “Oy oy oy! This isn’t the girl for you. Oy oy oy! A goy a goy a goy.” And the confused son that Aaron and Casey might one day have makes an appearance, doing a hip-hop number wearing a thick gold chain with Jewish and Christian bling. It’s not Cole Porter but, let’s face it, many people (me, too, though not in this instance) sometimes find banality hilarious.
Among the ensemble are two actors who appear as the inner voices of Casey and Aaron, interrupting them constantly to comment on their behavior during the date, which is filled with obvious missteps; most of the latter are artificial and improbable, but they serve well enough to spark some amusing reactions. One inner voice is that of Casey’s sister, Lauren, the other belongs to Aaron’s best friend, Gabe (Bryce Ryness). Another character threaded through the action is Casey’s flamingly gay BFF, Reggie (Kristoffer Cusick), whose cell phone calls to “bail out” Casey if the date is failing break into the action three times (two too many), and whose formulaic behavior and smarmy wisecracks become increasingly annoying. The trope of a single girl whose best buddy is a gay man is starting to wear thin. A recent example is another new musical, NOBODY LOES YOU. Briar assured me, by the way, that most of the first daters she knows often have a bail out caller lined up to help out in emergencies.


However much they may have liked the show, I doubt few visitors will have walked out singing Alan Zachary and Michael Weiner’s songs, but during the show they work effectively to keep the laughter rolling. Each of the ensemble members gets to shine, and Blake Hammond’s waiter is even given a risible show stopper in the Jerry Herman vein, “I’d Order Love.”

FIRST DATE is visually attractive, with a sparely designed set by David Gallo, expert lighting by Mike Baldassari that helps highlight the humor, and attractive costumes by David C. Woolard that perfectly characterize their wearers. There are also "media" designs, presumably the occasional projections, such as those of an animated Google page.
Despite the commonplaces and overly familiar characters and situations, the show somehow manages to be diverting, for which a large part of the credit must go to its stars. Mr. Levi, far more attractive than the script would have you believe, is a tall, slim, charming, and comically adept actor-singer who, while not gifted with a big Broadway voice, performs with delectable timing and physical grace. Ms. Rodriguez works in perfect counterpoint to him, bringing sardonic bite to their repartee; she has a big sound and charismatic presence and is perfectly believable as the wound-up chick who, at first, would rather be anywhere else than on what she’s certain will be another blind date disaster. (Briar, by the way, thought Sara Chase had the best voice in the show.)


This small-scale musical, which might have been better suited to an Off Broadway venue, won’t set the world on fire with its conventional plot and only sporadically catchy score, but it contains enough charm and humor, not to mention onstage talent, to make a date with it. A slap from the New York Times shouldn't stop you from meeting this piece of sass.
Posted by Samuel L. Leiter at 5:53 PM