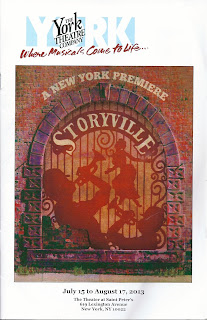 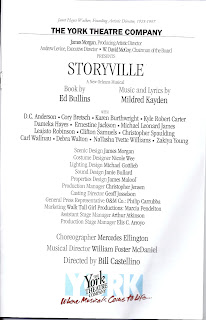 Storyville was a fabled New Orleans red-light district, named for politician  Sidney Story, located near the French Quarter, and conspicuously active from the 1890s until 1917. It was a place where the races mingled freely and where many, mistakenly, believe jazz was born. STORYVILLE, the 1977 musical being unevenly given its first New York staging by the estimable York Theatre Company, is an earnest attempt to recapture this legendary district’s passion, vitality, musical genius, and subculture of prostitution, gambling, and criminal activity. It was a place where, as in Edo-period Japan, you could actually buy books (called “Blue Books”) to explain what was available in the local brothels; the show includes a song called “The Blue Book,” but, oddly, makes little attempt to explain its context. In 1917, the year in which the show is set, Storyville was closed to US military personnel for reasons of “social hygiene,” and this was essentially the district’s end. Although the show suggests that Storyville was razed in 1917, this did not happen until the Great Depression, but, essentially, 1917 is when Storyville ceased to exist. We are led to believe that with its closing its special music, having lost its home, moved north where it caught on, taking the world by storm. 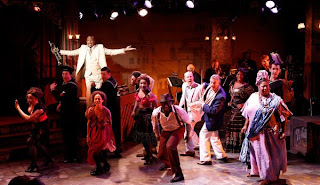 
The show’s lumbering book is by Ed Bullins and the sometimes jubilant, sometimes disposable music and lyrics are by Mildred Kayden. The musical numbers, generally well choreographed by Mercedes Ellington (Duke’s granddaughter), are the chief reason for visiting STORYVILLE, although not all the performers are on the same level; still, there's an abundance of talent on display, and enough spirited songs and dances, many of them jazz and Dixieland pastiches, to keep your feet tapping and your spirits lifted. Sadly, those spirits come crashing down when the book takes over, not only because of its humdrum complications but because the characters are so clichéd and the nonmusical acting so leaden and dully paced. Director Bill Castellino errs seriously in failing to maintain the same level of heightened enthusiasm in the book scenes that comes across during the singing and dancing.


A boxer-trumpet player from Chicago named Butch “Cobra” Brown (Kyle Robert Carter) arrives in Storyville to shake up the musical landscape dominated by trumpeter Hot Licks Sam (Michael Leonard James), and immediately has his trumpet stolen. Needing a job, he takes one  as a bouncer at a club run by the corrupt mayor, a white man named Mickey Mulligan (D.C. Anderson), and is soon falling in love with the joint’s hot singer, a dark-skinned beauty called Tigre Savoy (Zakiya Young, a standout). But sizzling sexpot Fify Foxy (a terrific Debra Walton), also has her eyes on him. There's also a subplot concerning a dashing French boulevardier, Baron Fontainebleau (Carl Wallnau), involved in the local opium trade but also the proprietor of a Parisian nightclub called Charlie’s Bar, where he wants to install Tigre as the main attraction (think Josephine Baker). Serving as a narrator through all this is Countess Willy Danger (Ernestine Jackson), dressed in a top hat and man’s evening duds, with her short hair slicked down, and performing with a sinister charm that made me think of what a lipsticked Ben Vereen might have looked like playing the MC in CABARET. (During his preshow speech, artistic director Jim Morgan playfully drew attention to the resemblance between the character’s name and the handle of Carlos Danger used by Anthony Weiner to one of the women he sexted.) There are two more or less big climaxes; in one, Butch is forced against his will to take part in a prize fight (staged in slow motion with freeze frames) during which a white sailor is stabbed by someone else, a crime Mulligan threatens to blame Butch for if he doesn’t follow Mulligan’s orders (a plot setup, by the way, that gets lost in the shuffle); in the other, Hot Licks and Butch compete against each other in a trumpet solo contest. The trumpet playing, however, is mimed and Stanton Davis, one of the show’s musicians, can be seen in the shadows upstage doing the actual horn blowing, thereby destroying the credibility of the moment. It doesn’t help when an actor removes the instrument from his mouth while the music is still playing.


James Morgan’s well-conceived set opens the small stage space up to accommodate a seven-member band seated on upstage platforms within an ambience that evokes an old-time saloon, with a small stage at stage right and a brick pillar and staircase leading off at stage left. The walls are plastered with faded photos and magazine articles displaying pulchritudinous prostitutes of the day (could these have been copied from actual blue books?); a sepia-toned skyline of old New Orleans is seen over the stage proper. Michael Gottlieb’s lighting goes a long way to creating the period atmosphere, and Nicole Wee’s costumes look just right for the world on view.


Ms. Kayden’s music ranges from full-throated ballads, none of which are especially noteworthy, and foot-stomping, hand-clapping, jazzed-up numbers, which usually manage to get the joint jumping. Some songs grow out of the story and move it along; others are merely there for their entertainment value and have no relation to the book. One of the best numbers belongs to NaTasha Yvette Williams, as Mama Magique, a super-plus-sized Creole conjure woman, who blasts us away with “The Best Is Yet to Be,” and makes us wish the show had given her more to sing. Dancer Leajato Robinson does a fine soft shoe number, “Good Feet Punchie,” but it uses so many tap steps that the absence of steel plates on his shoes makes it less impressive than it might otherwise be. The show opens with a mournful funeral dirge, “The Funeral,” as the company marches down the center aisle carrying what looks like a baby’s coffin (unexplained), and ends with a joyous company routine, “Call the Children Home,” which keeps the audience clapping rhythmically through the curtain calls.


Most audiences will find that STORYVILLE provides enough musical aspirins to ease its dramaturgical pains. Pain and pleasure--a perfect recipe for a show set in the red-light district. What's your threshold?