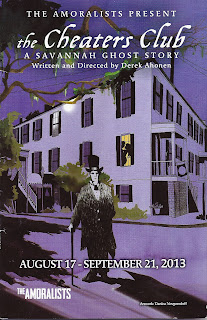 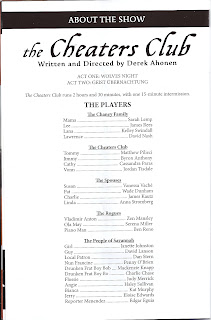 Back in 2006 my family and I took a cruise ship vacation to Mexico. On the way it stopped at Key West where we joined one of those haunted house tours. These take you to sites associated with notorious deaths while the tour guide asks if you see any “orbs” floating around in your photos; these supposedly are nearby wandering souls. For months after that we thought we saw orbs in many pictures we took; more likely, they were created by lens dust. Derek Ahonen’s new play, THE CHEATERS CLUB, produced by the Amoralists at the Abrons Arts Center (at the venerable Henry Street Settlement), uses such a tour to bookend a Southern Gothic story of ghosts and spirit possession in the city of Savannah, Georgia. Like many old southern cities, Savannah does a flourishing trade trying to scare out-of-towners to death. 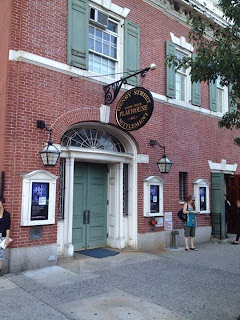 Henry Street Settlement, Henry Dejur Theatre, Grand Street.
The program notes discuss a particular night that allegedly occurs in Savannah every 333 years. The night is called Geist Übernachtung and “the last documented occurrence . . . was in the year 1680,” which would make 2013 the year the next one would appear. I can’t vouch for the authenticity of this story, since the Internet fails to list a single mention of Geist Übernachtung. It does state, though, that Savannah is “America’s most haunted city,” and the names of numerous ghost tours available there are listed. So it’s likely that Geist Übernachtung, which probably means something like “overnight with ghosts,” is the playwright’s concoction, designed to support his freewheeling and absurd (but not absurdist) plot. According to his notes, the legend of Geist Übernachtung  holds that on this night “the barriers between the natural and supernatural worlds are temporarily dissolved and the disembodied spirits of the wandering dead may easily cross back into the realm of the living.” This allows for situations that involve spirits taking possession of anyone, dead or alive, if a medium performs the proper rituals. 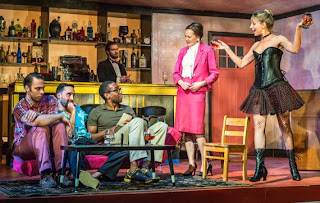 
Much of the auditorium seating is unused, probably so the empty seats (mostly in the side sections) are covered with cheesy cobwebs like those you see decorating houses on Halloween. The conventional proscenium stage is provided with a red curtain, hiding the scenery until the play proper begins. In a sort of prologue played in the auditorium and before the curtain, a Mephistophelian tour guide, Vladimir Anton (Zen Mansley), introduces us and two corny tourists (Janette Johnston and David Lanson) to the local ghostly lore, but even before the curtain rises we get a taste of how the play will try to blend farce and spookiness when the flamboyantly theatrical Vladimir refers to his landmark Off-Broadway production of a  one-man "kabuki UNCLE VANYA," signaled by karate chops. This kabuki UNCLE VANYA, unfortunately, becomes a running gag almost whenever Vladimir is on stage. (There’s a similarly misguided kabuki-karate conflation in AVI HOFFMAN’S STILL JEWISH AFTER ALL THESE YEARS.)


When, at last, the curtain rises, we see Alfred Schatz's rather elaborate, if clumsy and not particularly attractive setting, of a hotel, with a small lobby area down right, the hotel’s saloon occupying most of stage left, and three bedrooms on a second level joined by an outside corridor. The rooms (as well as the lobby) have front walls covered in scrim so that lighting makes them either transparent or opaque. (If you’ve ever seen pictures or a production of DESIRE UNDER THE ELMS, you’ll have an idea of what the bedrooms over the saloon look like.) Scenes played in and near the stage left bedroom are partly blocked by poor sight lines, and I was seated dead center. These facilities will be used by a band of four talkative tourists from New York, three of them siblings: a brashly profane guy, Tommy (Matthew Pilieci), his gay brother, Jimmy (Byron Anthony), and their foxy sister, Cathy (Cassandra Paras). The quartet is rounded out by their somewhat shy black friend, Vonn (Jordan Tisdale), a newcomer to the siblings' Cheaters Club, so-called since each is married and they’ve come to Savannah on an annual pilgrimage (a different city every year) to engage in extramarital dalliances. Soon enough, they encounter the Chaney family, headed by Mama (Sarah Lemp), the proprietor of the Chaney Inn, a good-looking, speed-talking, garrulous middle-aged Southern belle with a Georgia accent as thick as Spanish moss. Then there are her seemingly catatonic son and assistant, Lee (James Rees), whose Lurch-like behavior inexplicably vanishes as the play progresses; her other son, the straight-faced gay bartender Lawrence (David Nash); and her daughter, the sexy barmaid cum cabaret singer Lana (Kelley Swindell). Nor must we forget the hotel’s domestic, a voodoo woman named Ola May (Serena Miller), who figures significantly later on. Lots of townspeople walk by or frequent the bar. The number of characters (leads and supporting) who scream their lines, use vulgar language, or behave obnoxiously makes one wonder if they haven’t been taking lessons from the cast of SCARCITY, which I saw the day before.


Terrible things happen to the Cheaters Club members in the first act. In act two of this two-and-a-half-hour effort (and I do mean effort, for both those on stage and those in the audience), the club members’ spouses come down from New York to find out what happened to their loved ones. These additional instruments in the orchestra of blaring caricatures are Jimmy’s wife, Susan (Vanessa Vaché); Cathy’s husband, Pat (Wade Dunham); Jimmy’s husband, Charlie (James Kautz); and Vonn’s white wife, Linda (Anna Stromberg). By the end of the play we will have had lots of lightning and thunder effects, lamps flashing on and off, smoke and green lights, strobes, furniture bobbing up and down, an open tomb from which multiple corpses are removed, spirit possession, resurrections, and bundles of exposition to help clarify the muddy complications of Mr. Ahonen’s bloated plot. (The elaborate lighting is by Brad Peterson and the eerie sound effects and original music by Phil Carluzzo. Niiamar Felder is responsible for the many costumes.)


A great deal of work has gone into THE CHEATERS CLUB, which Mr. Ahonen also directed, but its exaggerated style and complete lack of nuance grow increasingly hard to take, and, for all the hoary thrill-house effects, the only fear one feels is that this exercise will never end. Despite the play’s title, the Amoralists have not cheated when it comes to casting, and no one appears to double in any roles. The most memorable moment comes during the curtain call when the 26-member cast lines up across the stage on both levels. It was memorable as well because it meant the show was over.
Posted by Samuel L. Leiter at 8:49 PM