77. Review of AVI HOFFMAN'S STILL JEWISH AFTER ALL THESE YEARS: A MESHUGENE LIFE IN THE THEATRE

77. AVI HOFFMAN’S STILL JEWISH AFTER ALL THESE YEARS: A MESHUGENE LIFE IN THE THEATRE 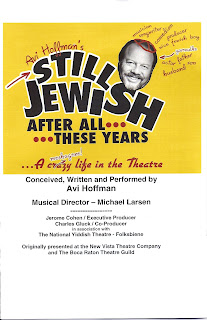 Last season, as in seasons past, plays and musicals with Jewish themes seemed to be opening every week, often piggybacking one another, as if to belie those who claim the middle-class New York Jewish audience is shrinking. If the abundance of such shows is to be believed, that audience has never vanished, even though the effects of the influx of ultraorthodox Jews into neighborhoods traditionally more secular isn’t noticeable at most presentations, since many in that demographic are not typically known for attending events at which the men and women sit together.  Still, the past week alone has provided three Jewish-themed shows: first, there was SOUL DOCTOR, about Shlomo Carlebach, the rock and roll rabbi; then came FIRST DATE, in which a shiksa’s revelation to a nice Jewish boy that she’s not Jewish sparks a production number by a chorus of Hasidim; and, finally, there was  the show whose logorrheic title headlines these comments.


Avi Hoffman, a balding, cherubic, paunchy actor-singer of 55 has made most of his career out of playing Jewish characters in plays and on TV (he now has a recurring role as a Jewish lawyer on MAGIC CITY), and has done two earlier solo shows, neither of which I saw, about the intersection between Judaism and his profession. The first two, in the 90s, were AVI HOFFMAN’S TOO JEWISH? and AVI HOFFMAN’S TOO JEWISH TWO, both of which were widely and frequently performed, including being shown on PBS. His latest venture in this category, AVI HOFFMAN’S STILL JEWISH AFTER ALL THESE YEARS, which comes 15 years after its predecessor, is being given above a Turkish restaurant in the intimate, boite-like (you sit at little tables on chairs or sofas), second-floor venue at Stage 2/Triad Theatre. Here, the Bronx-born Mr. Hoffman (who lived in Israel from 1969 to 1977), assisted by the talented pianist Michael Larsen, runs through the highlights of his stage life in 95 intermissionless minutes, singing lots of songs, doing impressions of a few famous Jewish comics, telling corny jokes, and talking about his holocaust survivor parents, who had successful non-show business careers after emigrating to America. Dressed in a suit and tie (patterned with large stars of David), he begins by shaking hands with the audience as he sings Alan Sherman’s pastiche of Ireland’s “Dear Old Donegal,” the one that goes, “Shake hands with your Uncle Mike, my boy,” but with all the Irish names changed to Jewish ones:


To celebrate the music of his youth, Mr. Hoffman offers an extended homage to fellow Jews Bob Dylan, Paul Simon, and Billy Joel (with no mention of Carole King, Neil Diamond, etc.), singing his heart out on songs like “Blowing in the Wind,” “Still Crazy after All These Years,” and “A New York State of Mind,” in each of which he opts for belting and histrionics over subtlety and simplicity: can karaoke be far behind? He offers a momentary, spot-on impression of Jackie Mason, but doing 10 or 12 minutes of a Menasha Skulnik imitation in 2013 suggests that Mr. Hoffman’s brand of nostalgia is a bit long in the tooth and expects his audience to be likewise (which, judging by those in attendance when I went, is a fair enough assumption).


Aside from the intrusion of his more personal experiences (especially his father’s death), the material is primarily about how Mr. Hoffman’s career developed from his preschool years on, with dozens of slides showing him in his many performances, along with images of his family and the like. There is some fairly rich material about his Yiddish theatre experiences and his important encounter with producer Joe Papp (né Papirofsky), and the show is filled with Yiddish bits and pieces, all of them instantly translated by Mr. Hoffman (even when not necessary), since Yiddish is actually Mr. Hoffman’s first language (his mother is a professor of Yiddish).


Mr. Hoffman works very hard at being ingratiating, since the show is really not much more than a “and then I acted in” brag book of theatrical achievements, and he will have to win you over if the show is not to appear overly solipsistic. That he succeeds only in part is largely because this is an artery-clogging corned beef sandwich of a show, definitely needing some of the fat trimmed off. We learn not only about his career highs (each advance being introduced by “and then I got the call”), but also the lows, when he was in a flop or jobs were not coming in, and when he found himself going from being the “go-to guy” for Jewish characters to the “too Jewish” guy who considered changing his name so that he could find work in non-Jewish parts. (Note: He’ll be starring locally in the first Yiddish production of WAITING FOR GODOT, opening in late October.) Near the end, when you think the show has reached its end, he launches into a 10-minute overview of his more recent activity, during which he sometimes managed to get cast in gentile roles, with projections identifying his shows as he offers songs and acted scenes intended to display his acting chops. Thus we witness bits and pieces from regional stagings of CHICAGO, HAIRSPRAY, SUPERIOR DONUTS, THE QUARREL, FRANKIE AND JOHNNY IN THE CLAIR DE LUNE, JACQUES BREL . . . , CLOSER THAN EVER, THE ODD COUPLE, HELLO MUDDAH, HELLO FADDUH, and so on. The result, however, is like an extended ego trip cum audition.


Despite Mr. Hoffman’s references to his occasional hardships, the mood is mostly upbeat and pleasant. Nevertheless, for all the Yiddish jokes, the show biz references to famous Jewish entertainers, and the scenes and songs from shows like FIDDLER ON THE ROOF, the question of what being Jewish means to Mr. Hoffman is never addressed: it’s simply a given that, being Jewish, there are certain shared cultural experiences that a Jewish audience will appreciate and going any deeper into their meaning might only intrude on the fun. It might even be like ordering a glass of milk with your pastrami in a kosher restaurant—totally out of place. Still, it would have helped to avoid the impression of self-promotional superficiality that hangs dangerously over the show.


Last year, OLD JEWS TELLING JOKES turned out to be a hit among non-Jews as well as Jews despite its seemingly parochial material, so perhaps Mr. Hoffman’s show will likewise appeal across the ethnic divide. It does seem to hold more interest for older folks, like me, who get the references scattered throughout, like the connection between New York Jews and Miami; most people in the audience at the show I saw seemed of my generation, but I did wonder how much of the material was appreciated by a young Asian woman in the house.


Mr. Hoffman’s name in the title of this and his earlier one-man shows seems intended to make you suspect that he’s a big name you never heard of. Humility, however, in a show that actually projects images of the star’s reviews, or that, even in jest, allows its star to keep reminding the audience of how cute or handsome he once was, is not on this restaurant’s menu. But, if you're hungry, don't worry because, oy vey, what a shanda already, Mr. Hoffman sure serves up plenty of ham.