78. LET IT BE: A CELEBRATION OF THE MUSIC OF THE BEATLES 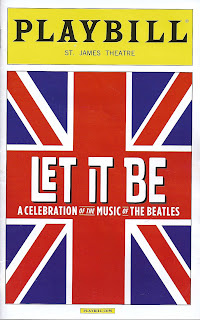 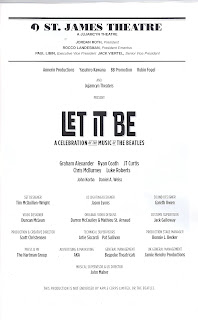 If you ever wondered whatever happened to those screaming American teenagers who can be seen fainting and hyperventilating in old clips of the Beatles at their 1965 Shea Stadium concert wonder no more. They’re in the audience at LET IT BE, the latest Beatles tribute concert on Broadway (it debuted last year in London), following BEATLEMANIA (1977) and RAIN (2011), shaking their booties, a word that didn’t exist back in the day (at least not these kinds of booties), and acting for all the world as if they were in the presence of the actual John, Paul, George, and Ringo. Actually, I’m exaggerating just a bit, since the kids of 1965 would now be in their early to mid-60s and the more exhibitionist members of the beatlemaniac pack at the St. James are maybe 10 or 15 years younger, and were probably infants when the Beatles arrived on these shores. Nonetheless, there were plenty of people in their 60s and older standing and waving and shouting and jiggling and singing along during the two acts of LET IT BE, and I myself, staid keeper of these records, had to stand a few times just so I could see what was happening on stage.


My introduction to the Beatles came while I was in graduate school at the University of Hawaii in 1963, when I wandered into a record store in Honolulu’s Ala Moana shopping center. There, piled on tables at the front of the store, were recordings of this latest British boy band, with likenesses of their mop headed faces, attached to cardboard posters, bouncing around on springs. In a flash, their music was everywhere, and it became impossible to ignore them, even though I took a little longer than most to become a follower. My son Justin, on the other hand, born in 1967, grew up to become a Beatlemaniac, collecting every bootleg concert and studio recording he could get his hands on and reading every book and article on the Fab Four, to where he knew every published detail about their lives and music (much as he also does about Queen). So he was my guest at today’s performance, and my expert advisor on the authenticity of what he saw and heard.


Both of us agreed that the only performer who looked and sounded most like the Beatle he was playing was Graham Alexander, a terrific 23-year-old who won a Drama Desk Award for his work in RAIN. Justin noted the physical disparity among the members of the quartet, saying the original band members were all about the same size. And we shared the opinion that the actor playing the quiet one, George Harrison, was the least charismatic, although he did a rousing cover of “While My Guitar Gently Weeps.” (It’s really hard to comprehend how many brilliantly memorable songs these guys created.) The others, Ryan Coath as John Lennon and Chris McBurney as Ringo, were fine, although McBurney bears absolutely no resemblance to the famous drummer. Justin, who has seen many other tribute bands do the Beatles, had no serious qualms about the singing, which he felt was close enough to the great Liverpudlians to carry the music. I learned afterward that the cast rotates with other performers, so the cast I saw may not be the one you see if you go. I also should note that none of the actors is credited with a named role, nor are the names John, Paul, George, and Ringo even mentioned in the show; instead, the Playbill lists their roles as “Musician,” probably because of some legal technicality. As has been reported in recent months, the producers of the RAIN have been suing LET IT BE for some sort of copyright infringement, so perhaps there’s some connection.


Apart from the opportunity to hear 40 great Beatles’ tunes, the show itself is not especially exciting, despite a hyped-up Broadway audience that would have stayed well past the final curtain to hear their favorite songs. They came to see a Beatles concert, not KING LEAR, and they floated out as if they’d just been on a real-life magical mystery tour.


The curtain is decorated with huge old-fashioned TV sets and a radio dial, with video images being played on the screens showing old news clips, commercials (including cigarette spots later in the show), Beatles questions, and the like. When it rises we’re in The Cavern, Liverpool, and the young Beatles begin rocking through one up-tempo, foot-stomping, over-amped, lyric-swallowing number after another; finally, we get to that gorgeous ballad “Yesterday,” which sounds even better coming as it does after so many hard-rocking songs. Apart from ersatz voiceovers copying old broadcast interview comments and other remarks (including a poor imitation of Ed Sullivan), there’s very little narrative or dialogue to explain the context of the leaps forward in time that take us on a trip through the group’s musical history; the changes in music, matched by changes in costuming, facial hair and wigs (much too phony), are only roughly chronological, and Justin pointed out numbers that had come earlier than the period in which the show placed them. The expected milestones are dutifully recreated, including the band’s appearance on Ed Sullivan, their enormous concert at Shea Stadium, their HARD DAY’S NIGHT movie, their “Sergeant Pepper” album (with its outlandish silk costumes), and finishing with “Abbey Road.” All is played against a simple environment of brick side and back walls, with loads of projections, videos, and lighting effects that grow increasingly more complex as the show proceeds, including psychedelic images that cover the entire inside of the theatre.


The audience either already possesses whatever Beatles history it needs to know, or, more likely, couldn’t care less as long as they can drown in the sounds and experience the evolving styles for which this astonishing band was responsible. This becomes particularly evident in act two, when the rock and roll of act one morphs into the more adventurous and revolutionary music introduced, according to Justin, on the “Revolver” album, and then influenced by the hippie, antiwar, and drug taking activities of the late 60s. The audience’s enthusiasm increasingly appeared to be manipulated by Gareth Owens’s sound design of raucous fan reactions played over the loudspeakers and blending with the sound of the live audience’s own noisy responses. I had fun watching the not-so-young spectators jumping up and down and dancing in the aisles and side balconies as if they were not at a Broadway theatre but at MSG or any other giant concert venue. When the show proper ended, the house lights remained dim as the audience clamored for encores, and, of course, after a suitable hiatus, the boys came back and gave us “Give Peace a Chance,” “Let It Be,” and “Hey, Jude.” And still the fans demanded more.


This is a show mainly for Beatles fans, tourists, and nostalgia geeks. It’s conventional, has nothing new to offer, and is merely an excuse for revisiting one of the greatest bands of all time in the person of wax statues that have come to life, but necessarily lack the heart and soul of those they represent. I was very happy that my Beatlemaniac son had a chance to enjoy it, despite some minor cavils; had he not been such an avid fan, I might just have let it be.
Posted by Samuel L. Leiter at 8:21 PM