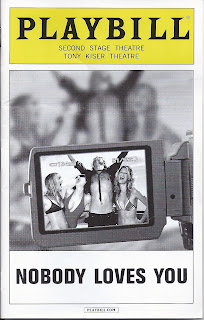 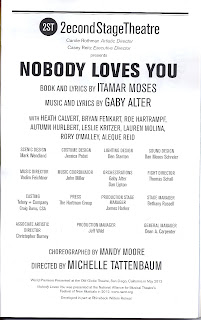 Plays spoofing or critiquing trite TV game and reality shows aren’t especially new. In 1966 I was in a play at La Mama by Bruce Kessler called THE CONTESTANTS, an off-color parody of TV’S long running QUEEN FOR A DAY; I played the slick, insipid MC. More recently, GOOD TELEVISION, seen at the Atlantic, was a fairly serious look into the cynical behind-the-scenes maneuverings of a reality show about addiction. The latest entry into the field is a 90-minute, intermissionless, satirical musical called NOBODY LOVES YOU, with book and lyrics by Itamar Moses and music by Gaby Alter, at the 2econd Stage Theatre. It comes to New York after a successful premiere last summer at San Diego’s Old Globe Theatre. Like THE CONTESTANTS, its intent is to mock its subject, in this case a reality show called “Nobody Loves You” that’s like a BIG BROTHER and BACHELOR mash-up, attempting to create romantic attachments among contestants rooming together in the same house (hot tub included). Replete with its own slick, insipid MC, Byron (an outstanding Heath Calvert), it does so with a fair degree of wit, intelligence, and theatrical pizzazz, but ultimately is as insubstantial as the material that inspires it. 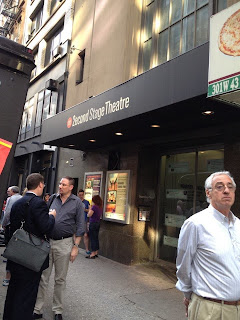 Jeff (a fine Brian Fenkart), who’s writing his doctoral dissertation, lives with his girlfriend Tanya (the always excellent Leslie Kritzer, in one of three roles). Tanya is addicted to “Nobody Loves You,” but Jeff, whose specialty is ontology—which, explains Wikipedia, is about the nature of being, becoming, existence, or reality—dismisses such shows as pure fakery. His attitude so irks Tanya that she leaves him, intending herself to become a contestant on the show. Jeff, hoping to win her back, also tries to get on the show. However, Tanya doesn’t make it and he does because Nina (Ms. Kritzer again), the producer, thinks his negative attitude about the show’s phony reality will help boost its drooping ratings, which it does. Jeff not only chooses to analyze (as the subject of his dissertation) how the TV show plays with perceptions of reality, he also finds love in the person of Jenny (Aleque Reid, very good), the assistant producer, a would-be filmmaker who holds similar views on the show’s fraudulence. As Jeff and Jenny work out their budding relationship, five other broadly drawn characters vie not to be voted off the show and told: “It’s time to pack your things and leave this house. Because? Nobody loves you.” They are Christian (Roe Hartrampf), whose name defines his preoccupation; Megan (Lauren Molina), a sexed-up blonde with a frizzy perm; Dominic (Rory O’Malley), a clueless dude who’s eternally confused; and Samantha (Autumn Hurlburt), a dizzy redhead with a fondness for liquor who learns that the key to success is to love yourself. A sixth contestant who is voted off before we learn much about her is Zenobia (once again, Ms. Kritzer), a Latin sexpot. Other characters are Chaz (Mr. O’Malley), Jeff’s stoner-type roommate; and Evan (also Mr. O’Malley), Jenny’s gay friend, an inveterate blogger and Twitterer, who has one of the show’s few standout numbers, composed mostly of tweets and hashtags. Everyone is talented and appealing, but their roles are mostly paper-thin caricatures. 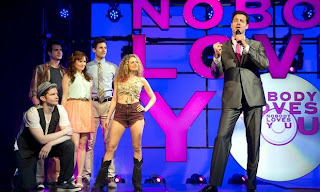 
There are a few good laughs, but I didn’t find the show as laugh-out loud funny as others seem to have; a semi-running gag that gets two or three tries is to have someone think that Jeff’s interest in ontology means he’s an eye doctor (ontology-optometry, get it? Oy). The first to make this connection is Jeff’s girlfriend Tanya, which, given his scholarly inclinations, makes his interest in her beyond belief. The music, for the most part, is like so much we now hear in musical theatre, essentially rhythmic support for clever lyrics and rarely anything you’re likely to hum, even after hearing it a dozen times. It’s serviceable, does its job, and is quickly forgotten. Still, it does serve to sell Itomar Moses’s highly inventive lyrics in such numbers as “So Much to Hate,” in which the play’s two cynics share their disdain for things we all take for granted.


Mark Wendlund has provided a sleek, minimalist set of chrome pillars, platforms, and balconies that allows for scenic pieces to slide in and out and magically appear from or disappear into the floor, something that more and more well-budgeted designers are doing. Ben Stanton does wonderful work with the colorful, often flashy lighting, and Jessica Pabst’s smart costumes help define each character distinctly. Michelle Tattenbaum’s direction and choreography move everything along briskly, with effective movement for the several dance-like routines.


I can’t say nobody loves you to this sometimes engaging, sometimes bland, but always polished musical. All I can do is speak for myself.
Posted by Samuel L. Leiter at 1:05 PM