"Rockin' at the Rattlestick" 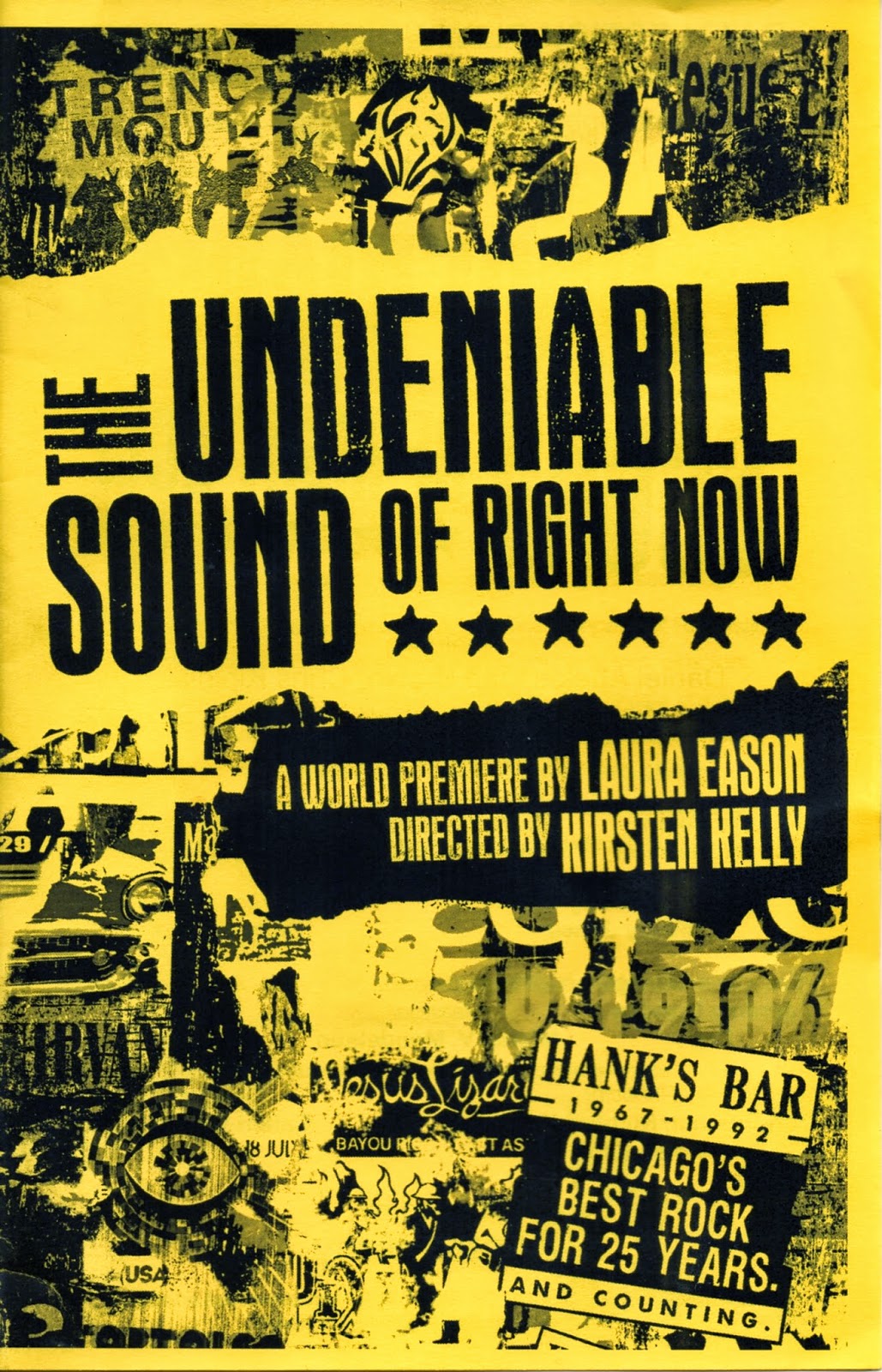 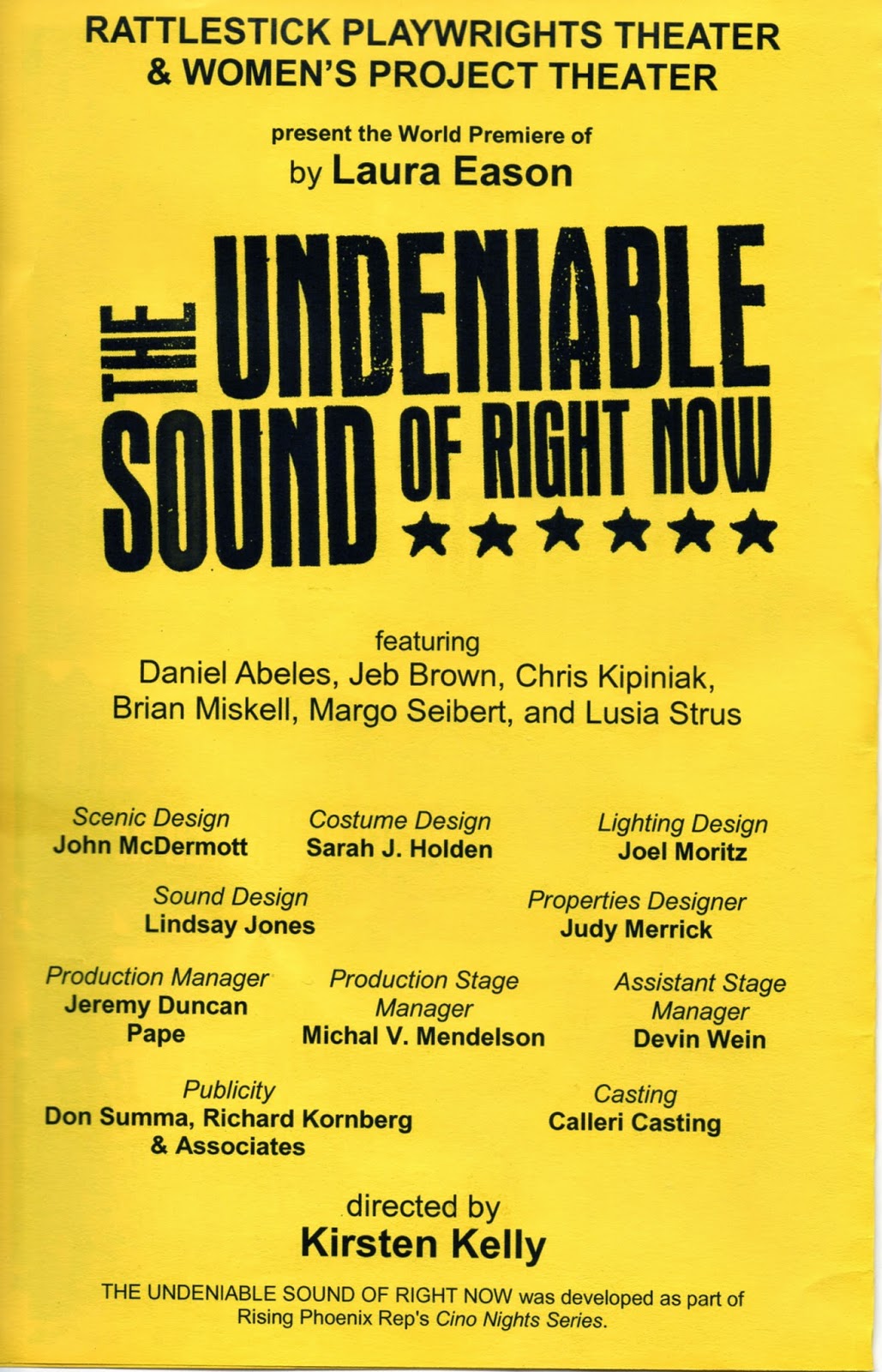 There’s a scene in the 1951 film Westward, the Women in which Robert Taylor and Henry Nakamura drunkenly parody a conventional 19th-century melodrama, their dialogue going something like this:

As THE UNDENIABLE SOUND OF RIGHT NOW, Laura Eason’s (SEX WITH STRANGERS) moderately engaging new dramedy at the Rattlestick (in collaboration with the Women's Project Theater), demonstrates, this old trope is alive and kicking, albeit in the radically disguised form of a domestic drama set in Hank's Bar, a conspicuously shabby, CBGB-type rock music club in 1992 Chicago. The crabby, middle-aged proprietor, Hank (Jeb Brown, Don Kirshner in Broadway’s BEAUTIFUL), a former musician, has run the place for 25 years; as a newspaper article celebrating the event avers, he’s a local legend because of the many cutting edge “Indy rock” musicians and groups he’s fostered; Nirvana, Stevie Nicks, the Clash, and Kiss are mentioned prominently (the latter with an apocryphal anecdote about their famous makeup), and the Clash’s Joe Strummer is even said to be coming to do a secret set.


Hank and the aging slum lord who owns the building have had a handshake deal keeping the rent reasonable, but the owner has entrusted the property to his ambitious son, Joey (Chris Kipiniak), who couldn’t care less about the joint’s history and will close it down if he doesn’t immediately get a 20% rent hike; he even suggests to Hank’s Joan Jett-ish 22-year-old daughter, Lena (Margo Seibert, Adrian in Broadway’s ROCKY), that she could pay it off “in trade.”
With the threat of losing the crumbling establishment in the balance (a ceiling verges on collapse), and the aggressively stubborn Hank’s unwillingness to take Joey’s demands seriously or to accept any change in the way he runs the place, it’s up to Lena, Toby (Brian Miskell), the club’s nerdy factotum who digs Lena, and Nash (Daniel Abeles), Lena’s DJ boyfriend, to carry out a rescue plan. The idea, hatched by Nash, involves taking over the deserted warehouse next door (also owned by Joey’s dad) and charging admission to an all-night rave presided over by a dozen DJs.
DJs are anathema to the old-school, change-resisting Hank; Lena says he thinks them “soul-less.” (“Hank: He’s just playing records. How can that be a skill?”) When he meets the initially polite and respectful (albeit ambitious) Nash he treats him rudely with unbridled contempt. The play’s ending is sufficiently ambiguous for some to wonder whether Hank’s initial judgment about Nash is valid or unjustified. As for his judgment about the DJ’s craft, it might be of interest to check out this link to the April 2 edition of the NewYork Times.
Rounding out the cast is Hank’s ex-wife, Bette (Lusia Strus), a raspy-voiced, va-va-voom blonde. Hank married Bette after his drug-addled first wife, Lena’s mom, departed, and, though he and Bette live apart, she’s often at the club and has a warm relationship with both Hank and Lena, her stepdaughter. Despite her bimbo-like big hair and skintight outfits, she’s intelligent and sincere. Ms. Strus, a standout, makes this supporting role live and breathe.
Hank’s problem is his inability to accept that he’s aging and losing touch with changes in contemporary musical tastes. He rejects anything smacking of nostalgia because it makes him feel old. He’s also an extremely controlling (and jealous) father; Lena's the biggest love of his life, especially when it comes to his fear of her using drugs, but the resulting conflict between his wishes and hers occasionally tips into sitcom territory, especially when she proves a chip off the old block. Troubled as it is, though, the Hank-Lena relationship contrasts sharply with the more strained, if only glancingly expressed, one between Joey and his (unseen) father.

Despite its “you must pay the rent” plotline, the play struggles to generate real tension, and seems more intent on character exploration than melodramatic suspense. A lengthy, intimate scene between Hank and Bette gives her a chance to defend Nash, and provides Hank an opportunity to rhapsodize about what music means to him, but it also bogs the play down.

Kirsten Kelly’s nicely judged direction is heightened by John McDermott’s atmospherically detailed barroom setting, Joel Moritz’s versatile lighting, Sarah J. Holden’s 1992 hipster clothing, and Lindsay Jones’s expert sound design. Mr. Brown, whose Hank resembles a skinny Kris Kristofferson, makes a believable musician/club owner, although his more emotional scenes shade into mannerisms (hands on face, hands through hair, etc.). He provides two credible—but seemingly tacked-on—musical numbers, one of them the Stones’s “Pleased to Meet You,” accompanying himself on an electric guitar. Ms. Seibert, an outstanding musical talent, sings not a note, but comports herself well in the role of a daughter challenging her father’s expectations. Messrs. Abeles, Miskell, and Kipiniak all provide substantial ballast to make it worth your while to check out this conventional 95-minute play set within an unconventional world.