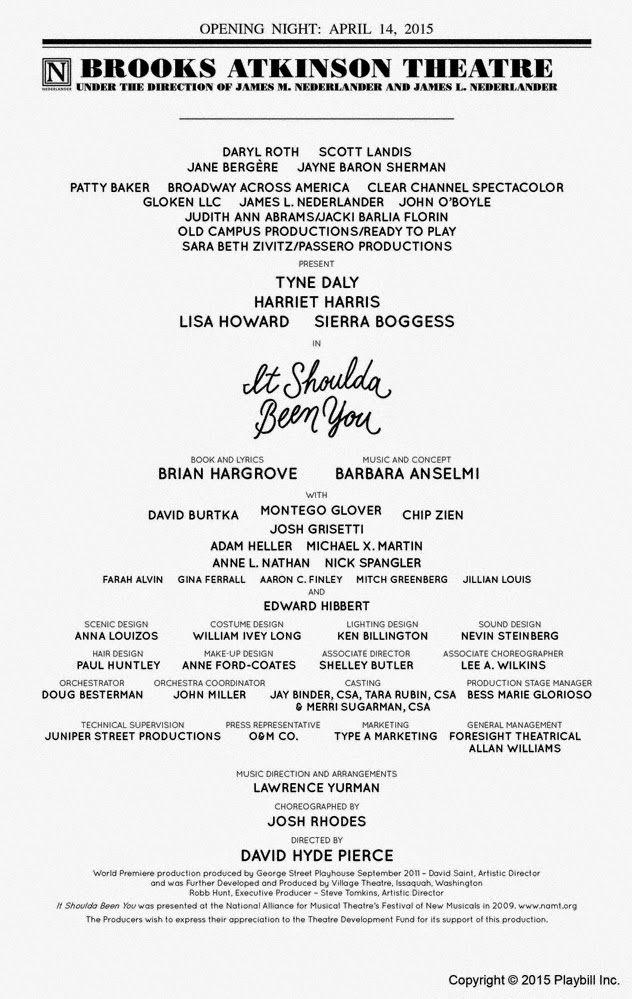 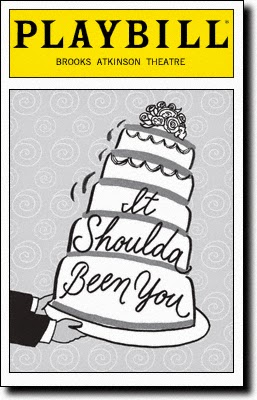 There are enough shows and movies about weddings to form a subgenre of their own, so the new old-fashioned Broadway musical IT SHOULDA BEEN YOU (defiantly entertaining, regardless of its flaws and what you may have read elsewhere) fits a very well-established niche. It also belongs to the sub-niche of shows about interfaith marriages, like ABIE’S IRISH ROSE, whose story of a Jewish boy marrying an Irish Catholic girl was provocative enough to spark a Broadway run of over five years, from 1922 to 1927. The recent legalization of gay marriage is already inspiring shows celebrating same-sex nuptials. IT SHOULDA BEEN YOU, for which David Hyde Pierce is making his Broadway directing debut (his husband, Brian Hargrove, wrote the book and most of the lyrics), is ostensibly about the marriage of a Jewish girl to a gentile boy. This Jewish-Catholic affair, however, eventually expands into a Jewish-goyish-gayish extravaganza. Fortunately, the question of who’s paying—the bride’s family, the groom’s, or the whatever you call it’s—never arises.

The show sets us down in a fancy hotel where preparations are under way for the marriage of Jewish Rebecca Steinberg (Sierra Boggess), daughter of Judy (Tyne Daly) and Murray (Chip Zien), to Catholic Brian Howard (David Burtka), son of the wealthy Georgette (Harriet Harris) and George Howard (Michael X. Martin). The wedding guests are all staying at the hotel, so Anna Louizos’s attractive unit setting, with multiple doorways and a second story, is flexible enough to serve for multiple interiors, including—not very convincingly—a beauty parlor and a ladies’ room. The lovely costumes, designed by William Ivey Long, are easy on the eye, and Ken Billington’s lighting makes everything look as attractive as it should.
IT SHOULDA BEEN YOU provides a classic plot setup allowing conventional borscht-flavored jokes and misunderstandings about Jewish customs and Yiddish expressions (like the way Brian destroys “kinehora”) to do battle with jabs at country clubber preconceptions. Opportunities abound to exploit the strain between the two matriarchs, the take-no-prisoners Judy and the booze-thirsty, sex-hungry Georgette. Added to the brew is an assortment of stereotypical but marvelously performed characters: Rebecca’s unmarried, pretty, but overweight older sister, Jenny (Lisa Howard), the brunt of Judy’s hurtful cracks about both her size and competence; Marty Kaufman (Josh Grisetti),  Rebecca’s ex, who arrives to break up the wedding; Murray, the accommodating little mensch of a dad who does all he can to avoid run-ins with his domineering wife; George, the uptight father who struggles awkwardly to bond with his son; Albert (Edward Hibbert), the archly sardonic wedding planner who proudly fixes every glitch, of which there are many; Annie (Montego Glover), Rebecca’s beautiful black maid of honor; Greg (Nick Spangler), Brian’s good-looking best man; the Steinbergs’ relatives, the clownish Uncle Morty (Adam Heller) and the randy Aunt Sheila (Anne L. Nathan); and, for good measure, the hotel help, Mimsy and Walt, played with delicious versatility by the same actors who undertake Morty and Sheila.
No relatives from the gentile side appear, but with fifteen characters already accounted for, all of them having plenty to do, it’s a good thing writers Brian Hargrove and Barbara Anselmi (music and lyrics) know when genug iz genug.
The plot is filled with complications, many of them creaky but still laugh-worthy: we wonder, among other things, what’s actually going on between the maid of honor and the best man; what's Marty really after; how will Jenny resolve her emotional crises as she watches her younger sister beating her to the altar; what can be done about Aunt Sheila’s horniness; will the parents find some common ground? As we near the finish line, a grapeshot’s worth of new complications explodes, some stretching credibility to the breaking point, but, hey, if you’ve loaded up on everything till then just think of the final moments as the Viennese table and shove those extra goodies down your gullet.
Without its serviceable, quite listenable, and occasionally even rousing score, IT SHOULDA BEEN YOU could be the kind of farce that summer and dinner theatres thrived on over half a century ago. In fact, seeing it the day after I’d seen LIVING ON LOVE gave me the feeling Broadway was shifting into a retro cliché world resembling popular theatre of the fifties (despite the contemporary takes on same-sex relations). Most of the 19 songs are well-integrated storytellers, moving the plot along, explaining reactions, and allowing characters to vent. Standouts include the title song, in which Rebecca’s family expresses who it is they’d have preferred as Rebecca’s spouse, and “Jenny’s Blues,” with which Ms. Howard brings down the house. This isn’t a dance show per se but when dancing's needed, Josh Rhodes is there to provide suitable choreography, like the deft soft shoe Brian and George perform when singing “Back in the Day.”
Mr. Hyde Pierce’s staging brings out all the perfectly timed reactions and business the piece requires, and the casting couldn’t be bettered, starting with Lisa Howard as the plus-sized sister with the face and voice of an angel; surprisingly, but not undeservedly, she gets the star curtain call after Tyne Daly. Ms. Daly is a ringer for many overpowering Jewish mamas I’ve known, including my own. She nails Judy’s mannerisms and shoot-from-the-lip wisecracks, and her singing, as in the fine “What They Never Tell You,” is first rate. Sierra Bogess, with her prettiness, presence, and pipes, is the whole package as the bride. Harriet Harris brings her razor-edged voice and comical peculiarities to Georgette, while Michael X. Martin is an impeccable complement as her uptight husband. Mr. Hibbert has a patent on roles like Albert, and Mr. Grisetti is in his loose-limbed element as the desperate Marty. All the others are equally adept, making this one of Broadway’s best ensembles.
IT SHOULDA BEEN YOU doesn’t seek to be THE KING AND I or GUYS AND DOLLS. It’s a modest-sized (no chorus line), 100-minute, intermissionless show with few pretensions other than to wring a laugh from you here, a tear from you there, and to make you feel good without ever challenging your intellectual capacities. Despite its corniness and comical familiarity, its singers can sing and many of its zingers zing; I had more unabashed fun than I did at several more highly touted (and extravagant) recent shows. If you miss it, it’ll be too late to say shoulda, coulda, woulda.