“Is There a Doctor in the House?” 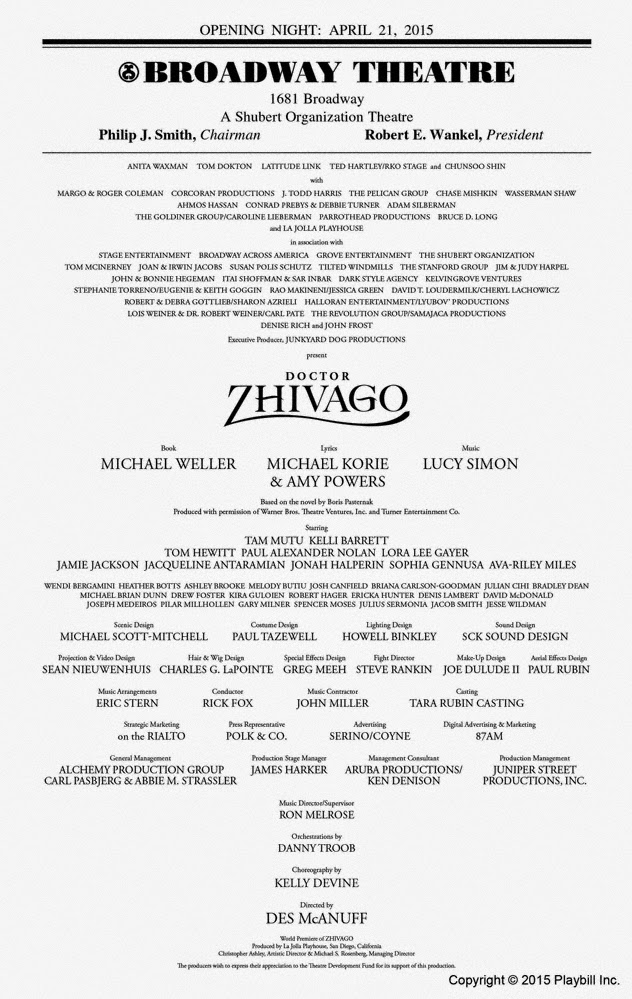 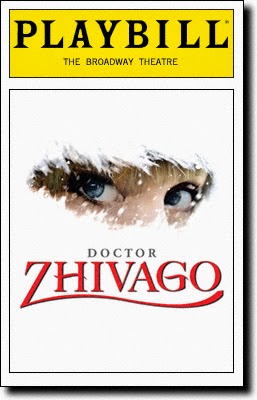 When Boris Pasternak’s epic romantic novel, DOCTOR ZHIVAGO, was published in Milan in 1957 (it was considered too anti-Soviet to be published in its homeland) it caused a worldwide sensation and became an instant best seller. Pasternak, already renowned as a great poet, won the Nobel Prize for Literature in 1958, but was pressured by the Soviet government to refuse it. In 1965 director David Lean turned the novel into a three-hour, 20-minute movie (intermission included) with an all-star, mostly British, cast, including Julie Christie as Lara Antipov, Omar Sharif as Yuri Zhivago, Rod Steiger as Komarovsky, Geraldine Chaplin as Tonya Gromeko, Ralph Richardson as her father, Siobhan McKenna as her mother, Tom Courtenay as Pasha/Strelnikov, and Alec Guinness as Yuri’s half-brother, Yevgraf. (Note: the spellings of some names in the movie differ from those in the Broadway show reviewed here.)
One of the chief criticisms of the film was the passivity of Zhivago and Lara, the romantic leads, which matched my own opinion after a recent viewing. This pervasive passivity of the soulful, saintly hero and heroine has been transferred to the new Broadway musical version of the novel. Regardless of the book’s reputation, its once-controversial political subject, the opportunity for spectacle, and the movie’s lushly romantic “Lara’s Theme” (by Maurice Jarre), one still must wonder what inspired this adaptation, with its book by Michael Weller, lyrics by Michael Korie and Amy Powers, and music by Lucy Simon (sister of Carly). Reportedly, the project has been evolving for almost twenty years!
This isn’t to say there isn’t a lot of drama in DOCTOR ZHIVAGO, but the drama is attenuated over three decades, with soap opera coincidences, numerous plot developments, and—unless you care very much about whether or not Zhivago and Lara’s love affair will succeed—no continuing central conflict other than the struggle to survive Russia’s political and human maelstrom before, during, and after World War I and the Russian Revolution. The Revolution itself provides opportunities for plenty of action, and some historically interesting speechifying, but it all gets swallowed up in the rush of events, the relentless piling on of one big power ballad after the other, and the ravenous needs of the physical production. Subtitles are necessary to help the audience keep up with the march of time.
Musicals based on thick historical novels (this one is over 700 pages) are a tricky business, and very few shows are able—like Boublil and Schönberg’s LES MISÉRABLES—to find the correct proportion of plot, character, history, music, and spectacle to hit the bulls-eye. And, unlike LES MIZ, to which its mixture of revolution, personal relationships, and big balladry has been compared, DOCTOR ZHIVAGO is insistently serious, the only number having a touch of humor being “It’s a Godsend,” which is as far from Boublil and Schönberg’s comic delight, “Master of the House,” as Moscow is from Siberia.
The show abandons the movie’s framing device of flashing back to the lovers’ story by having Yuri’s half-brother, a KGB officer, investigate whether a girl he’s been looking for is the daughter of the now deceased Lara and Yuri; still, it hews fairly closely to the plotline the movie devised for cutting through the novel’s multiple stories and characters. The reliance on the movie’s onetime popularity is further suggested by inserting “Lara’s Theme” into the score (with the “Somewhere My Love” lyrics that were later added by Paul Francis Webster) and by the show's advertising image of a woman’s beautiful eyes framed in white fur and snow; the latter seems strongly influenced by a streetcar scene in which Lean’s camera focuses on Julie Christie’s eyes (albeit framed in black, not white). “Lara’s Theme”—sung as a folk song, first in Russian, and then in English, by a group of nurses—really doesn’t fit the tone created by Ms. Simon’s score, and its placement seems awkward, but its haunting melody is not matched by the other, more operatic, numbers on display.

The basic story—some of whose sequences are raced through in telegraph-style to get them out of the way—begins (and ends) with a graveside scene of Lara and their child at Yurii’s funeral in 1930, then flashes back to the funeral of young Yurii’s (Jonah Halperin) mother in 1903, when he’s taken in to be cared for by her friends, Alexander (Jamie Jackson) and Anna Gromeko (Jacqueline Antaramian), who raise him alongside their daughter, young Tonia (Ava-Riley Miles). By 1914, these small children have (rather implausibly) grown into a handsome doctor (Tam Mutu), with a growing reputation as a poet, and a beautiful young woman (Lora Lee Gayer), who are destined to marry and have kids. We’re also introduced to the exquisite Lara Guishar (Kelli Barrett), daughter of the dress shop owner, Mrs. Guishar (Pilar Milhollen), who becomes the prey of her mother’s friend, the powerful lawyer Komarovsky (Tom Hewitt). Lara, however, loves and marries the idealistic revolutionary, Pasha Antipov (Paul Alexander Nolan). Before long the lawyer seduces Lara, she wounds him but he refuses to press charges, World War I breaks out, the Revolution erupts, Pasha becomes a vengeful Bolshevik, Lara (now a nurse’s aide) and Yurii meet while she’s searching for Pasha on the front, an affair between Lara and Yurii follows when they each move to the distant Urals, Yurii writes poetry inspired by Lara, Pasha is thought dead but turns out to be a cruel commander named Strelnikov, Komarovsky reappears in Lara and Yurii’s lives to help them, and, among other happenings, the Communist Reds successfully fight the Tsarist Whites.
Just before the final curtain, Lara and the dead Yurii (momentarily alive in Lara’s imagination) sing of their eternal love living “in ray of light, in a distant chime [whatever that is], on the edge of time.” This is not only melodramatic optimism, but unfaithful to the book, since Lara, although she attends Yurii’s funeral, winds up arrested in Stalin’s Great Purge and dying in the Gulag, and the orphaned daughter, Tanya, becomes a laundress.

This sweeping tale of passion and politics, strenuously directed by Des McAnuff, is laid out over two acts on designer Michael Scott-Mitchell’s raked, marble-floored stage. In act one impressive columns move on and off to encase both indoors and out, so even battle scenes seem to be fought from the confines of imperial Russian hallways. In act two, several bomb-scarred archways, one behind the other, again serve clumsily for interiors and exteriors. The “ice palace” of the abandoned Kruger mansion is a chintzy misfire. An image of chairs piled from floor to ceiling bookends the acts, although why escapes me. Also puzzling are Sean Niewenhuiss’s huge projections of photographs, especially one of Lara looking back over her naked shoulder. Finally, a long, metallic platform, that seems to be floating, revolving, and moving back and forth, serving mainly as a train, ultimately becomes distracting.

Of course, this being a show depicting wartime combat, the stage is often filled with smoke, shafts of powerful lighting (Howell Binkley’s work), explosions, and gunfire. There’s so much Sturm and Drang that both the story of the lovers and the nuances of the politics (critical of the inhuman excesses of the revolutionaries) get pretty much blown up in the process. The film makes the historical issues much clearer.

This isn’t to deny that there’s actually much beauty in the production, nor that, despite its susceptibility to criticism, it isn't enjoyable on some levels. It's certainly not boring, the staging often is visually striking, Paul Tazewell’s many period costumes are sumptuously lovely, and a number of the songs (like “Now” and “It Comes as No Surprise”) deserve to be heard again, although the show needs more musical variety.

The singing is sometimes glorious, but, apart from Mr. Mutu, the acting isn’t very impressive. Ms. Barrett’s Lara, in particular, is dull and noninflected, especially with the memory of Julie Christie (looking totally anachronistic, by the way, for an early 20th-century Russian prole) hanging over her. Tom Hewitt’s Komarovsky is competent, but not special, the way Rod Steiger’s was in the film, and Paul Alexander Nolan is more shouting attitude than breathing person. One problem stems from having the aristocrats speak in British accents and the proletarians in American ones. The latter sound gratingly flat when speaking the stagy dialogue, and diminish the performances of the actors. In the film, even American Rod Steiger did his manful best to sound British for the sake of consistency.
There’s a lot of bloodshed and other forms of suffering in DOCTOR ZHIVAGO, but, despite his proficiency at staunching wounds, Dr. Zhivago can’t do much to heal this show. It’s in that spirit that I ask, is there a play doctor in the house?