“The West Wing It Ain’t but It's a Lot Funnier” 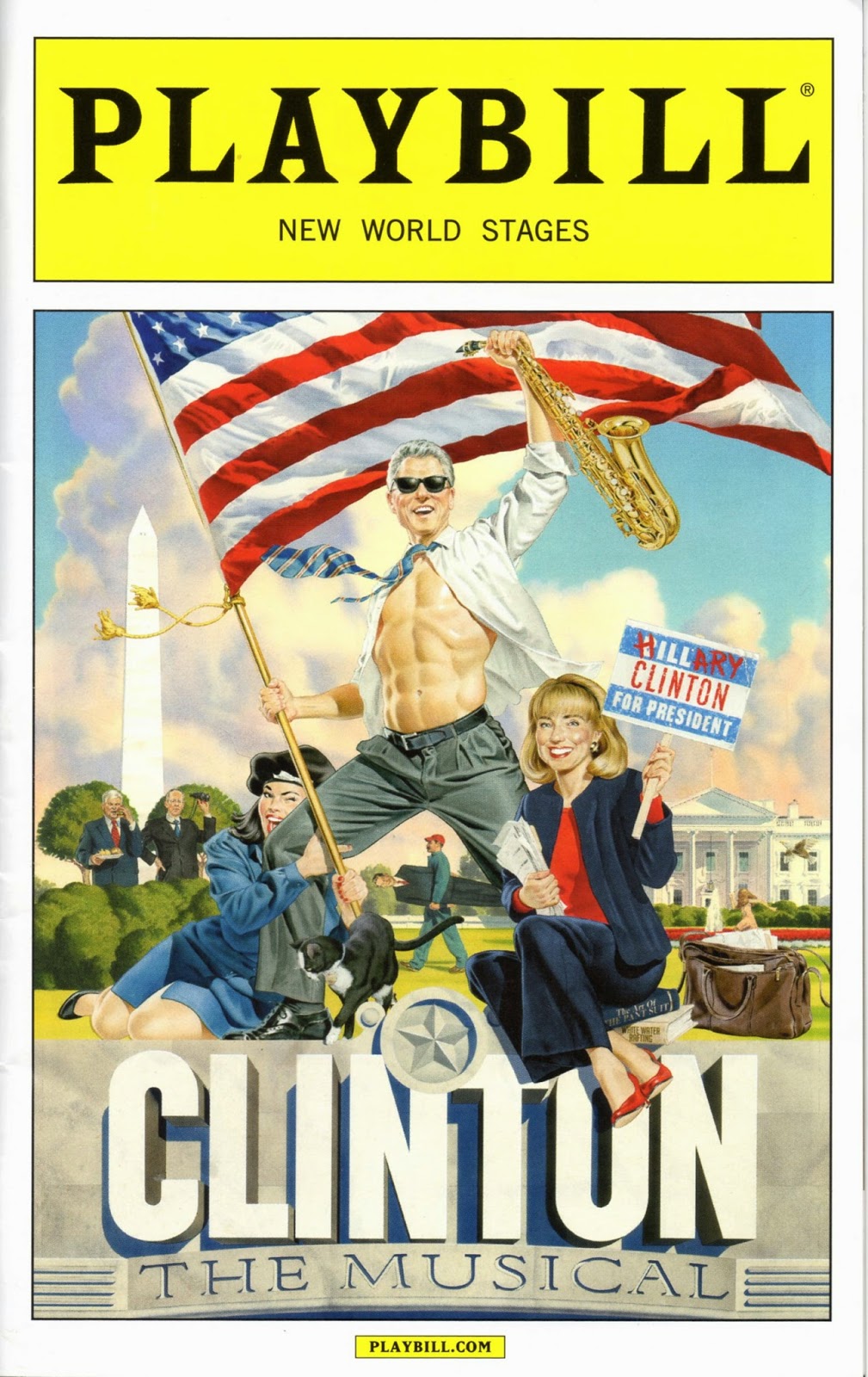 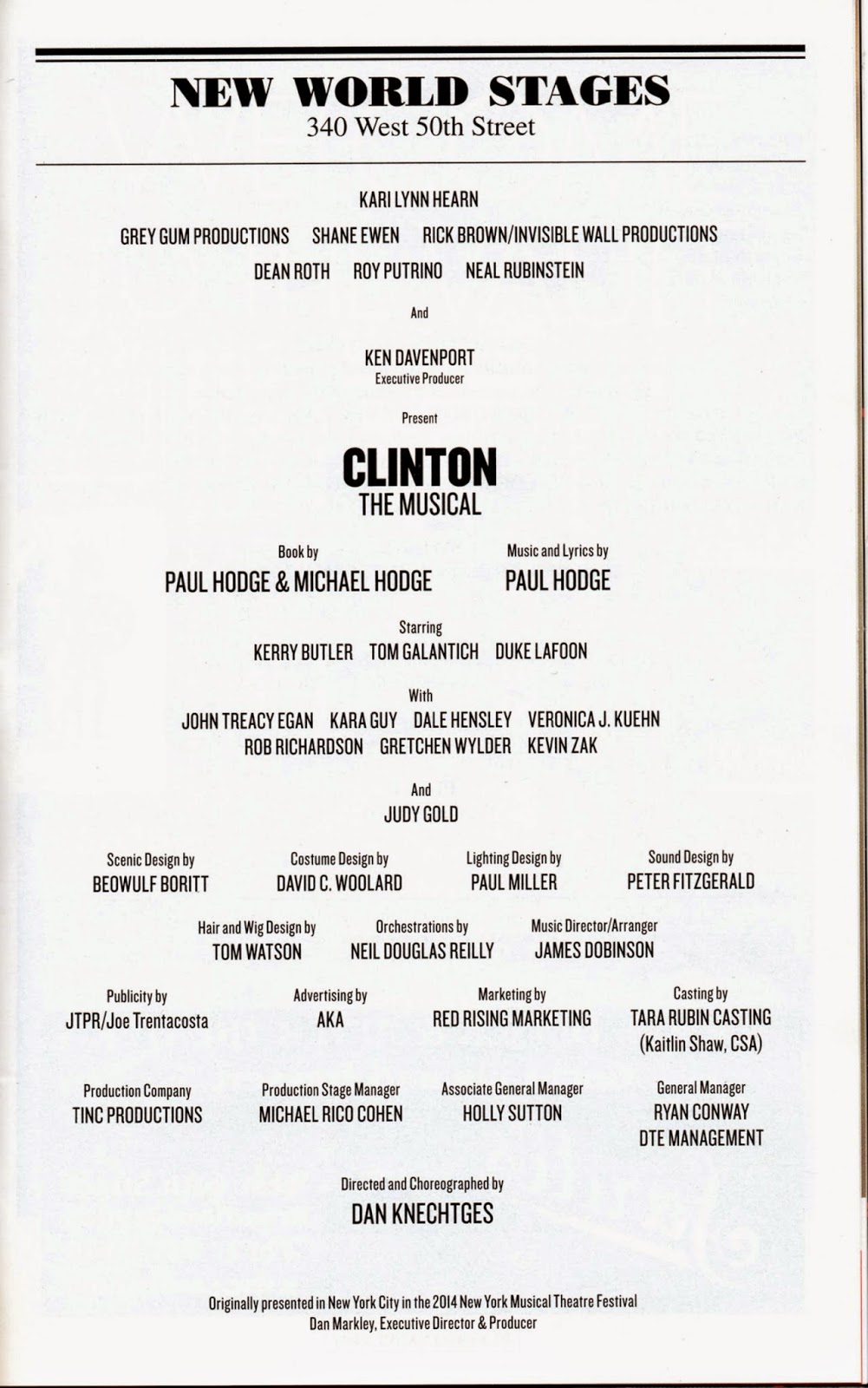 The spirited, very funny CLINTON: THE MUSICAL returns us to the naughty (and, in the modern way) gay 90s when the raunchy Democrat in the White House had not yet ceded power to the ranchy Republican who took us into Iraq following the nightmare of 9/11. Perhaps one day, when the darkness fades, it’ll be possible to conceive of a musical spoof of the Bush years, when, at least until 2006, we were able to escape from its horrors into the fantasy of a noble Democratic presidency via TV’s “The West Wing.”  Now, 15 years after the Clinton era ended, we’re able (thanks to time, the great healer) to look back and laugh through the prism of parody at those fin de siècle traumas; this is especially so since the main players in that 90s White House are still very much with us, with one of them announcing just this week that she’s running for the office her hubby clung to despite all that could be done to remove him.
There’s a lot here on which to exercise your zygomatic muscles when you compress into 92 raucous and often off-color intermissionless minutes a presidency marked (marred?) by Hillary Clinton’s failed health care plan, the Paula Jones accusations of sexual mischief, the so-called Whitewater scandal, the actual Monica Lewinsky scandal, the charges (still churning) of witchcraft aimed at the First Lady, Bill’s budget balancing efforts (with Hillary’s help), Newt Gingrich’s government shutdown, Clinton’s impeachment, Ken Starr’s prosecutorial antics, the 1996 campaign, the constant media frenzy, and the rest of the wild Washington shenanigans in the environs of 1600 Pennsylvania Avenue.
Smartly staged and choreographed by Dan Knechtges, and written by two Australians, Paul Hodge and Michael Hodge, CLINTON sets us smack down in designer Beowulf Boritt’s just-cartoonish enough Oval Office (nicely lit by Paul Miller), the side walls decorated with portraits of presidents and their presidential squeezes. A portrait of Eleanor Roosevelt can turn translucent so we can see Eleanor (Judy Gold) herself behind it offering advice (“A woman is like a teabag” that gets stronger when steeped in hot water) to Hillary, her spiritual mentee. Those above can open to reveal various characters who pop their heads through them, including Hillary, who shows up to welcome us to “her first presidency.” The central portion of the set revolves to show other locales, like the sub-sub basement where Gingrich and Starr machinate against the president.

The hilariously vibrant Kerry Butler plays Hillary, her blond hair set off by the First Lady’s familiar blue pants suit, while two actors play 42’s battling selves, the silver-haired Tom Galantich as the idealistic, earnest pol, WJ, and the dark-haired Duke Lafoon as the louche, weed-toking, sax-wailing, Arkansas-accented Billy. The imaginative premise shows the two sides of Clinton’s personality struggling for supremacy and Hillary’s favor.
Supporting them is a sensational ensemble of singer-dancer-actors playing multiple roles, highlighted by the towering, droll Judy Gold as Eleanor and, most memorably, Monica’s loudmouth friend and betrayer, Linda Tripp; the overstuffed, light-on-his-feet John Treacy Egan as the junk food-wolfing, dimwittedly nasty Speaker of the House and arch-Clinton adversary, Newt Gingrich, his head topped like whipped cream by a glaring white wig, who gleefully sings “Nay” to every Clinton idea; Kevin Zak as special prosecutor Kenneth Starr, a ghoulish creep with an upswept pompadour resembling a soft ice cream swirl, who strips off his clothing (while singing “A Starr Is Born”) to expose a toned body dressed in scanty S/M gear; and Veronica J. Kuehn as the sex-addled, beret-topped White House intern, Monica, who warbles the genteel “I Can’t Fucking Believe I’m Fucking the President” while cavorting around his desk, and tossing off lyrics like, “I feel like we just click when I’m sucking on his . . . thing.”
As this suggests, CLINTON: THE MUSICAL sometimes gets down and dirty, but the dirt is clean enough to remain within the boundaries of acceptable bad taste (how else do you do a show about a commander in chief who shot off his bazooka in an oval orifice?).
Also, you may remember a pack of Republican stiffs named Lott, Helms, Boehner, Hutchison, Dole, DeLay, Gramm, and Hyde; they’re here, too, but in the form of cardboard cutouts, all in black and white except one with a face notable for its Man-Tan veneer. Also standing by in cardboard stiffness is VP Al Gore. Socks, the Clinton cat, appears as a sock puppet, but little Chelsea passes by inconspicuously in the dialogue. Costume designer David C. Woolard does a bang-up job costuming everyone—cutouts excepted—in satirically amusing but not too overdone 90s' getups.
Catchy tunes, sprightly dancing, on-the-spot caricatures, and ribald humor combine to make this a welcome contribution to a mainly somber season. I’ve smiled a lot but haven’t seen too many shows this year that made me actually laugh (I can be a real sourpuss) so the fact that CLINTON: THE MUSICAL—revised after first being seen at the Edinburgh Festival Fringe and then being shown last year at the New York Musical Theatre—had me chuckling regularly is a sign that not only is this show funnier than most, but—when looked back upon through the fog of war—the Clinton epoch was funner than other presidencies. I can’t help but wonder if the imminent office holder's tenure (WHOEVER THAT MAY BE!) will prove equally as uproarious a couple of decades from now.