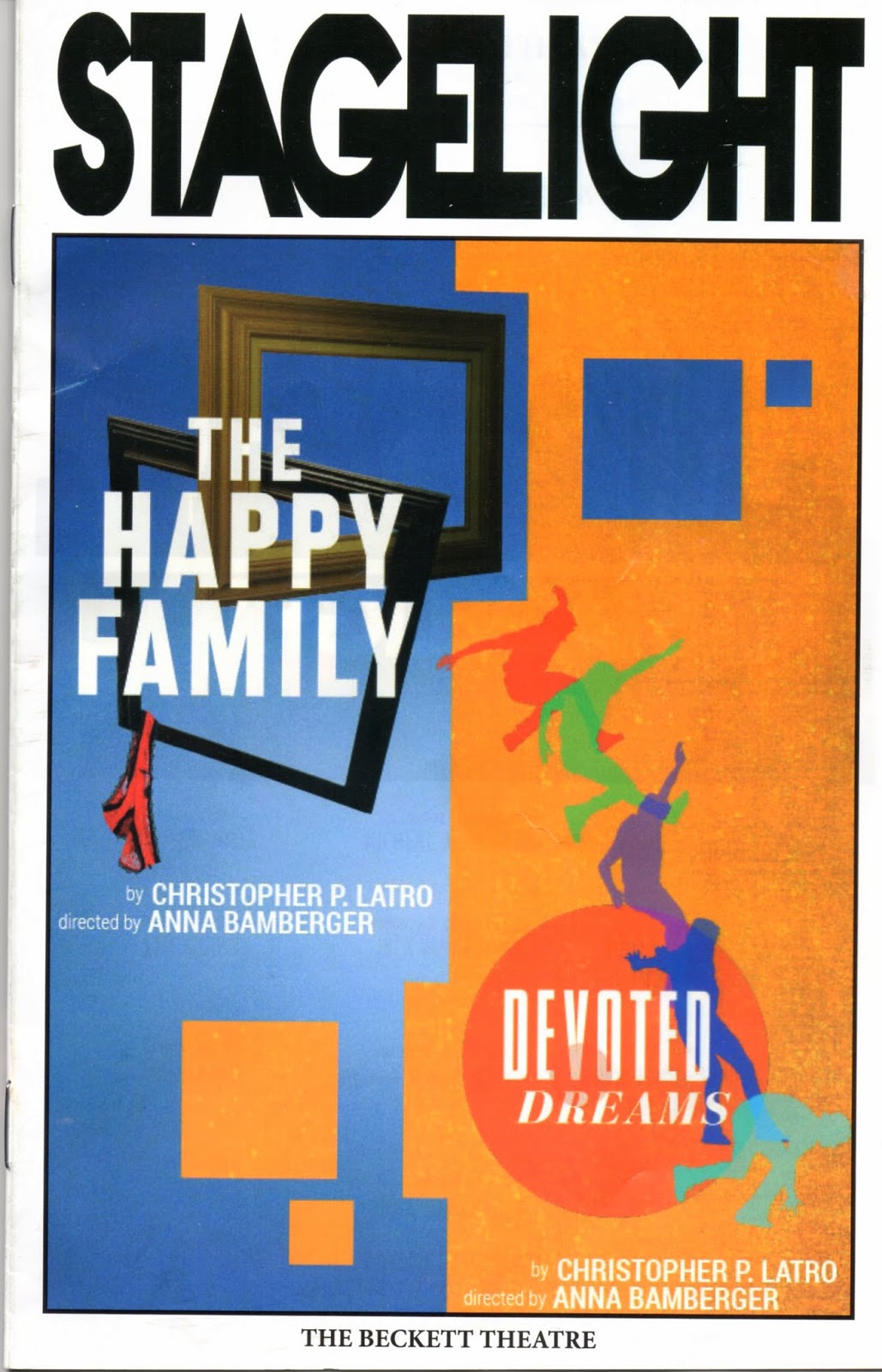 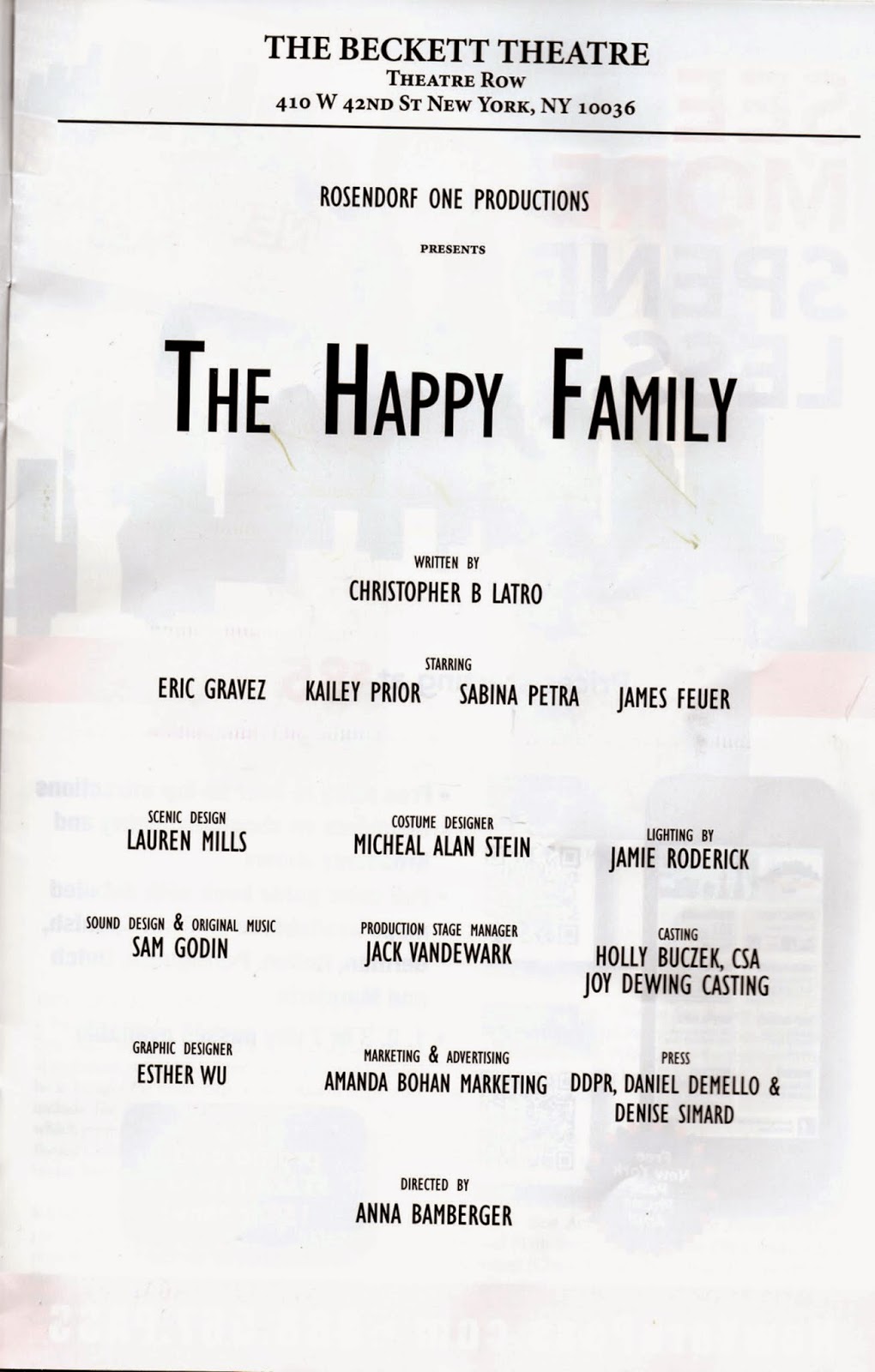 As I began writing this review of Christopher B. Latro's "dark comedy", THE HAPPY FAMILY, I was splashed by a wave of déjà vu, and decided to check my comments on Mr. Latro’s earlier play, ABSOLUTION, which I saw last December. Sure enough, I discovered that I was practically repeating my comments about a controversy then in the news regarding the reviewer’s responsibility when attending third-rate work. I wrote:

Reviewing theatre can be dangerous. You can sometimes find yourself renditioned to a black site disguised as a theatre where you’re subjected to a barrage of psychological torture in the form of a play. It’s even worse when the play you’re watching has no intermission, and you fear for your safety if you try to escape in mid-performance. Just kidding, of course, folks, but these thoughts came to mind at St. Luke’s Theatre on Tuesday as I watched the world premiere of Christopher B. [sic] Latro’s ABSOLUTION while contemplating the confluence of two news items: 1) the Senate’s report on the CIA’s torture program and 2) the controversy over Jane Kaufman’s Wall Street Journal article, “Confessions of a Broadway Bolter,” about her practice of leaving dull shows at intermission, even though she’s privileged to receive comps because of her position as a cultural reporter.

Once more, thanks to Mr. Latro and his directorial accomplice, Anna Bamberger, I found myself hanging on for dear life, praying for the misery to end. THE HAPPY FAMILY is, like ABSOLUTION, an unhappy testament to the art of amateurism. So many spectators' eyes were rolling that it was like being at an Eddie Cantor convention. As we departed, the gentleman next to me said, unsolicited, that he'd seen better second grade productions.

About the only professional feature of THE HAPPY FAMILY is its website, which provides the following synopsis (I've added a couple of character names, as well as those of the actors):

THE HAPPY FAMILY centers around three couples whose lives are provocatively intertwined with scandalous results. Cornelia (Kailey Prior) and William (Eric Gravez) weather a seemingly frustrated, tired marriage. Her mother (Margaret: Sabina Petra) and step-father’s (Theodore: James Feuer) relationship eerily mirror her own—especially with regard to feelings about the family business, an underground quasi-Ponzi scheme involving high art [chiefly, Picasso's 1917 painting, "The Happy Family"]. When Dennis (Mr. Feuer) and Elizabeth (Ms. Petra), a sexually progressive, happy couple, are introduced, layers of dysfunction, deceit and disease seep in, with permanently damaging results. THE HAPPY FAMILY is a multi-layered play that observes the tendency in families to repeatedly run in toxic circles and explores nonconforming alternatives to break these cycles.

Believe me, if this hopelessly muddled play were half as clear as the summary, I wouldn't have scribbled reams of indecipherable notes just to keep alert. The dialogue—much of it shouted angrily at their spouses by nasty characters with little apparent motivation—is so lumbering, banal, and clumsy even Streep and De Niro would throw up their hands (and lunch) trying to speak it. I'm tempted to quote, but why beat a dead play?

As in ABSOLUTION, which had a different cast, the actors, however poorly they come off, show an inkling of promise at doing better under other circumstances; or maybe I'm just feeling sorry for them. Given the low budget, the rest of the creative team, all of them involved in the earlier play, do their best; still, the less said the better.

A couple of attendees didn’t give a hoot about the lack of an intermission and scooted out midway, while several others kept reaching for their coats and wondering if they could manage to slip out unseen. Intermission or not, departure opportunities abounded, as neither the director nor costume designer Micheal Alan Stein seem to realize that the costume and wig changes required between each of the multiple scenes need to be instantaneous, just as lighting designer Jamie Roderick is unable (or was unasked) to lower the lights sufficiently to hide the actors scurrying off as scenes ended. Some changes took as long as 45 seconds when I attended, leaving the stage dimly lit as recorded piano music tinkled in the background. Stare at your watch for 45 seconds if you want an idea of the tedium the audience has to endure while waiting for the actors to return to their already tedious chores in this tediously episodic play.
THE HAPPY FAMILY is part two of a trilogy. Coming up at the same venue: DEVOTED DREAMS, directed by Anna Bamberger. Dream on.