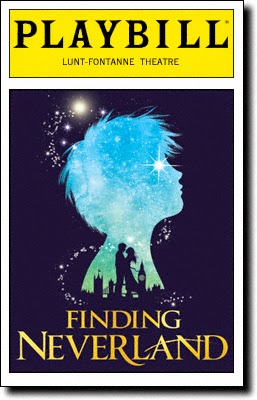 Making a musical out of PETER PAN OR THE BOY WHO WOULD NOT GROW UP, Scottish playwright and novelist James M. Barrie’s famous Edwardian play, is one thing. The story’s filled with colorful characters and oodles of action and adventure, offering countless opportunities for imaginative stage excitement. Making a musical out of the travails of its author to write his 1904 play (later novelized) is another, but that’s what Broadway’s FINDING NEVERLAND seeks, with limited success, to do.

The beautifully designed, occasionally spectacular effort, whose lead producer is Hollywood honcho Harvey Weinstein making his Broadway bow, makes use of enchanting special effects, and—after a lengthy, troubled period of pre-New York gestation—is proving to be a crowd pleaser, despite many (but not universally) negative reviews, and seems to have a healthy future as a family entertainment. Although not a Disney production, it has a Disney touch about it, with its two-dimensional characters, melodramatic elements, and sentimental book pumped into full-blown theatrical life with all the resources a big budget and elaborate staging—the work of director Diane Paulus and choreographer Mia Michaels—can provide.
Based on the boring (I thought) 2004 movie of the same name—starring Johnny Depp as Barrie; Kate Winslet as Sylvia Llewelyn Davies, mother of the “lost boys” who inspired Barrie’s story; Julie Christie as her socially prominent mother, Mrs. du Maurier; and Dustin Hoffman as hard-nosed American producer Charles Frohman—the show features Matthew Morrison (“Glee”) as a bearded Barrie (who wore a mustache, not a beard, and because of dwarfism, was only 4’10”), Laura Michelle Kelly as Davies, Carolee Carmello as du Maurier, and Kelsey Grammer as Frohman. The film was based loosely on Allan Knee’s little-known play, THE MAN WHO WAS PETER PAN.
FINDING NEVERLAND, for all its historical distortions, is the Peter Pan origin story set to the mostly unmemorable music and lyrics of Gary Barlow and Eliot Kennedy. If, despite the recent hit production of PETER AND THE STARCATCHER and the TV revival of the 1954 musical PETER PAN, starring Allison Williams, you still haven’t got your fill of the kid in the green tights, then you probably haven’t grown up and still believe in fairies (I know, I know), or you want your kids to (is that really such a good idea?). Perhaps FINDING NEVERLAND will help you kick the habit.
You can't expect a show about Barrie's play not to spend some time showing what the fuss is about, and this is mainly provided when, at the end, a tab version is performed for the benefit of the dying Sylvia in the confines of her bedroom following the play’s opening night performance. There also are several briefer infusions of Peter Pan material, such as the opening number where a dancing Peter (Melanie Moore) offers some Pannish maneuvers, or when Captain Hook—Frohman’s imagined alter ego—dons the metal claw and pirate gear in fantasy sequences, most memorably in the grandiose conclusion to act one, when pirate ship rigging and billowing sails fill the stage and Barrie poses amidst a group of buccaneers like a revolutionary on the ramparts in LES MISÉRABLES. When the curtain falls on that impressive scene you have to marvel at all the ingenuity (and money) that’s been spent to dramatize so earth-shattering a dilemma as a writer’s struggles to compose a new script. The scene epitomizes how effectively Ms. Paulus's staging manages to distract you from the story’s thinness. Among the clever choreographic delights are several sequences when characters squeeze together in interestingly packed formations, including under a long table, like something from stylized Russian theatre of the 1920s.
The plot shows how the previously successful Barrie suddenly finds himself flailing after the failure of his latest play, THE WEDDING GUEST. With the insistent Frohman breathing down his neck for something new, and unable to come up with an idea that isn’t somehow a rehash of his established work, he has the good fortune to meet the lively Llewelyn Davies children, George* (the oldest), Peter (grieving for his late dad but showing writerly potential), Jack, and Michael (the youngest) in Kensington Park. (A fifth lad was too young to make the cut for the movie and show.) Being himself still very much a child at heart (and stuck in a childless marriage to the stuffy Mary Barrie [Teal Wicks]), he bonds with them as their master playmate, making up adventurous games, while also becoming the close friend of their beautiful, recently widowed mother, Sylvia. Gossip, of course, soon follows, and Barrie must fend off the meddling of Sylvia’s high-toned mother, Mrs. du Maurier. It’s Sylvia whose early death brings the schmaltzy book to a heart-tugging finish, as she moves on to more heavenly comforts while a remarkable cone of fairy dust in which a silky gold garment swirls about asks us to believe in—the afterlife?
Well before that happens, however, Barrie’s relationship with the boys and Sylvia sparks his creation of the Peter Pan story, which explores not just the childhood imaginations of the boys, but also that of the boy still inside the man. But before it can be produced, he must convince the skeptical Frohman of its stage worthiness, while also dealing with Mary’s intimacy with the pompous Lord Cannan (Tyley Ross), his own divorce from Mary, and his attraction to Sylvia. (Some of this is true, some spurious, and all of it historically compressed.)
We also see Frohman’s London acting company rehearsing PETER PAN, replete with flamboyantly self-centered hams, whose overdone histrionics don’t do the show any favors. Finally, the show goes on and, of course, turns out to be a huge success. (It ran at the Duke of York’s Theatre for a profitable 145 performances and was often revived in England and abroad.)
The handsome Mr. Morrison, despite the romantic phoniness of his character, offers a suitably restrained Barrie, and his respectable acting skills are suitably matched by an excellent singing voice. Mr. Grammer’s Frohman is far more the drolly elegant, aphorism-dropping, gentleman than the man he’s based on, but he brings a strong theatrical presence to the role and is deliciously wicked in the guise of Captain Hook; it's too bad he gets one of his biggest laughs on a line referencing his old TV show, “Cheers.” Both Ms. Kelly, a British star, as the sweetly alluring, tragically afflicted Sylvia, and Ms. Carmello, as her imperiously protective mother, act and sing their conventional roles superbly, the kids are slick pros, and the ensemble is high quality.

Some of the songs are pleasant enough in a familiar sort of way (“Neverland” among them), but few are outstanding or especially original, either for their lyrics, their music, or their integration into the story. Their titles alone suggest how standardized are their emotions and ideas: “Believe,” “All That Matters,” “What You Mean to Me,” “We’re All Made of Stars,” and so on, including an uncomfortable “Circus of Your Mind” that serves only to remind us of the similarly titled but far superior Jacques Brel classic.

The biggest drag is James Graham’s mawkish and only fitfully amusing book, which at one point even descends to shamelessly copycat Abbot and Costello’s classic baseball routine, with the participants confusing the word “darling” and the name Darling. Oh, for the days when throwing tomatoes was acceptable.

Scott Pask’s lovely and abundant scenery, Kenneth Posner’s exceptional lighting, Jon Driscoll’s magical projections, Suttirat Anne Larlarb’s exquisite costumes, Paul Kieve’s “illusions,” Daniel Wurtzel’s “air sculptures,” and all the other technical and design elements—including the Tinkerbell effect and a small amount of flying—help satisfy the masses, but none of the stage trickery on display can disguise the fact that FINDING NEVERLAND’s rather undramatic story has been inflated with show biz expertise to seem more exciting than it really is.

As everyone knows, PETER PAN has a scene when Tinkerbell is dying, and the audience is asked to clap to show they believe in fairies. Naturally, that scene is here, but if I ever see it again, I promise to sit on my hands.