"Climbing that Stairway to Broadway Paradise" 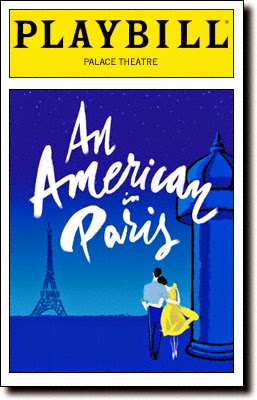 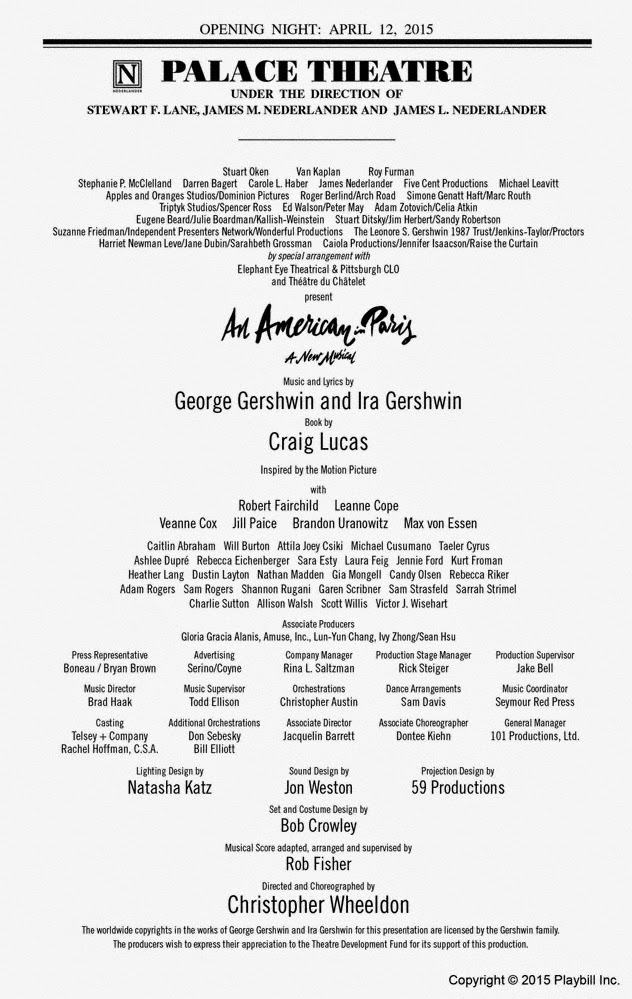 An American in Paris, the dance-heavy, $11.5 million American musical that premiered last year at Paris’s Théâtre du Chatelet, has returned to its native shores, where it opened last night at Broadway’s Palace Theatre. Is the 1951 movie on which this exuberant, but not entirely successful, show is based one of your golden oldies? If so, you’re probably wondering how closely it follows that multi-Academy Award-winning Technicolor film, directed by Vincent Minnelli and starring the inimitable Gene Kelly and Leslie Caron. The answer: fairly closely in some regards; in others, not so much. 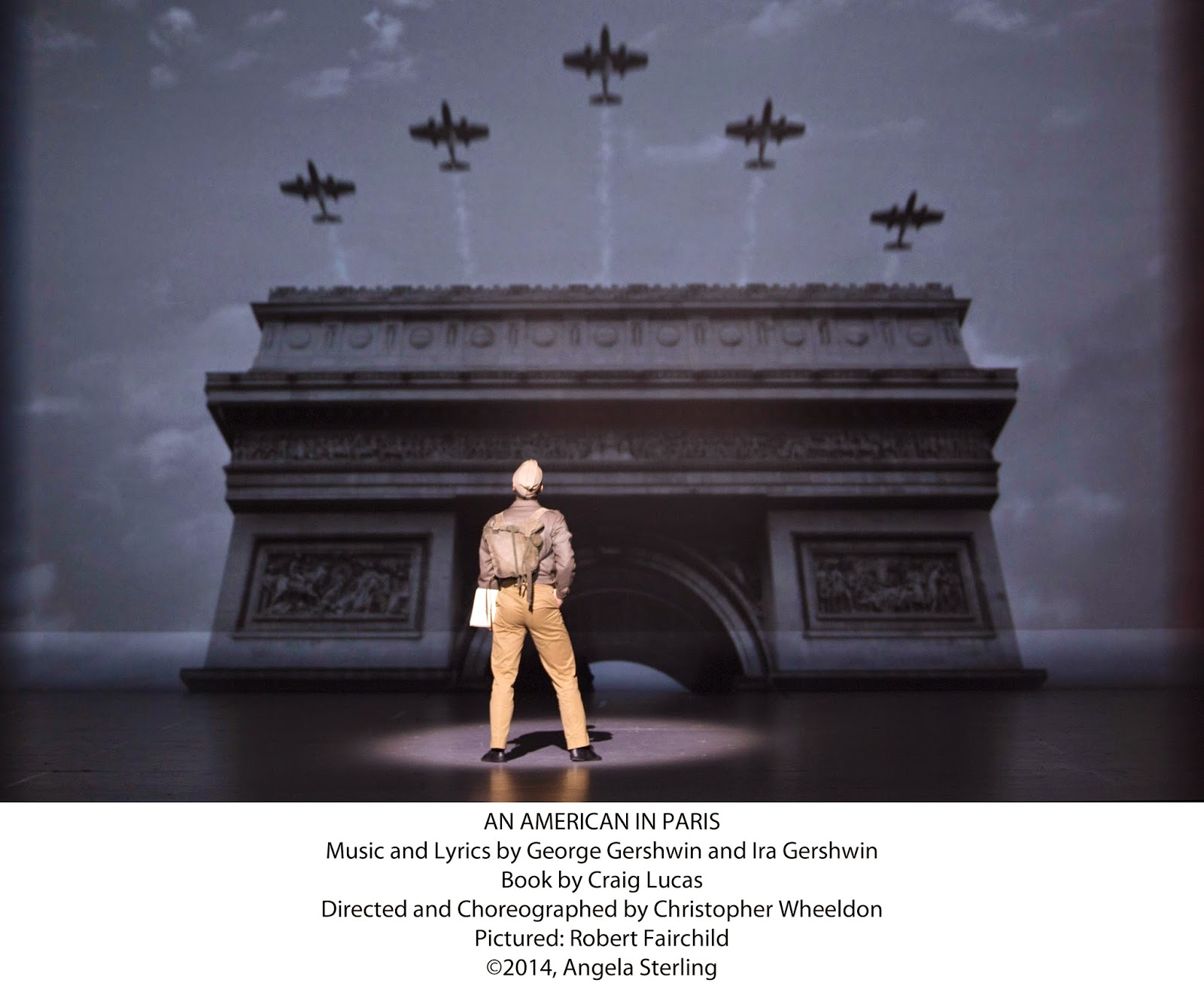 Like the film, Broadway’s An American in Paris is set to material selected from the songbook of George and Ira Gershwin. However, to help the music move the story along in Craig Lucas’s new book, only a few of the movie's songs have made it to the stage: “I Got Rhythm” (without the screen version’s kids, sorry to report), “I’ll Build a Stairway to Paradise” (in a spectacular white tie and tails chorus number), “S’Wonderful,” “Concerto in F,” and the eponymous composition accompanying the movie’s famous dream ballet. Gone are “Embraceable You,” “Nice Work If You Can Get It,” “By Strauss,” “Tra-la-la (This Time It’s Really Love),” and, most regrettably, “Our Love Is Here to Stay” (unforgettably sung and danced by Kelly and Caron alongside the Seine). 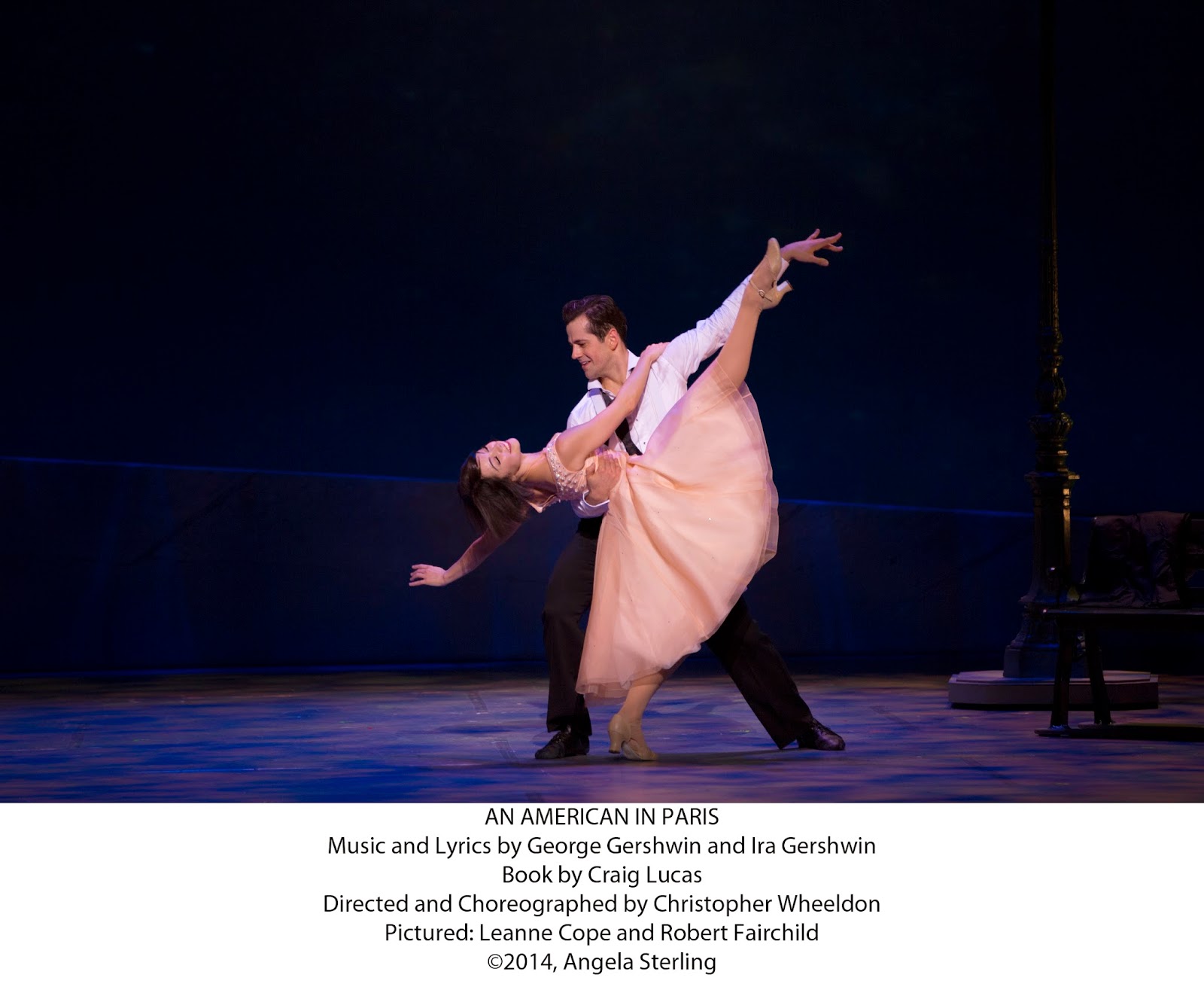 In their place are “Second Prelude,” “I’ve Got Beginner’s Luck,” “The Man I Love,” “Liza” (replacing “Our Love Is Here to Stay” at the riverside), “Shall We Dance,” “Second Rhapsody/Cuban Overture,” “Fidgety Feet,” “Who Cares?” “For You, For Me, Forevermore,” “But Not for Me,” and “They Can’t Take That Away From Me.” Given that most are beloved Gershwin standards (I could have done without "Fidgety Feet"), the trade-off certainly is fair enough. 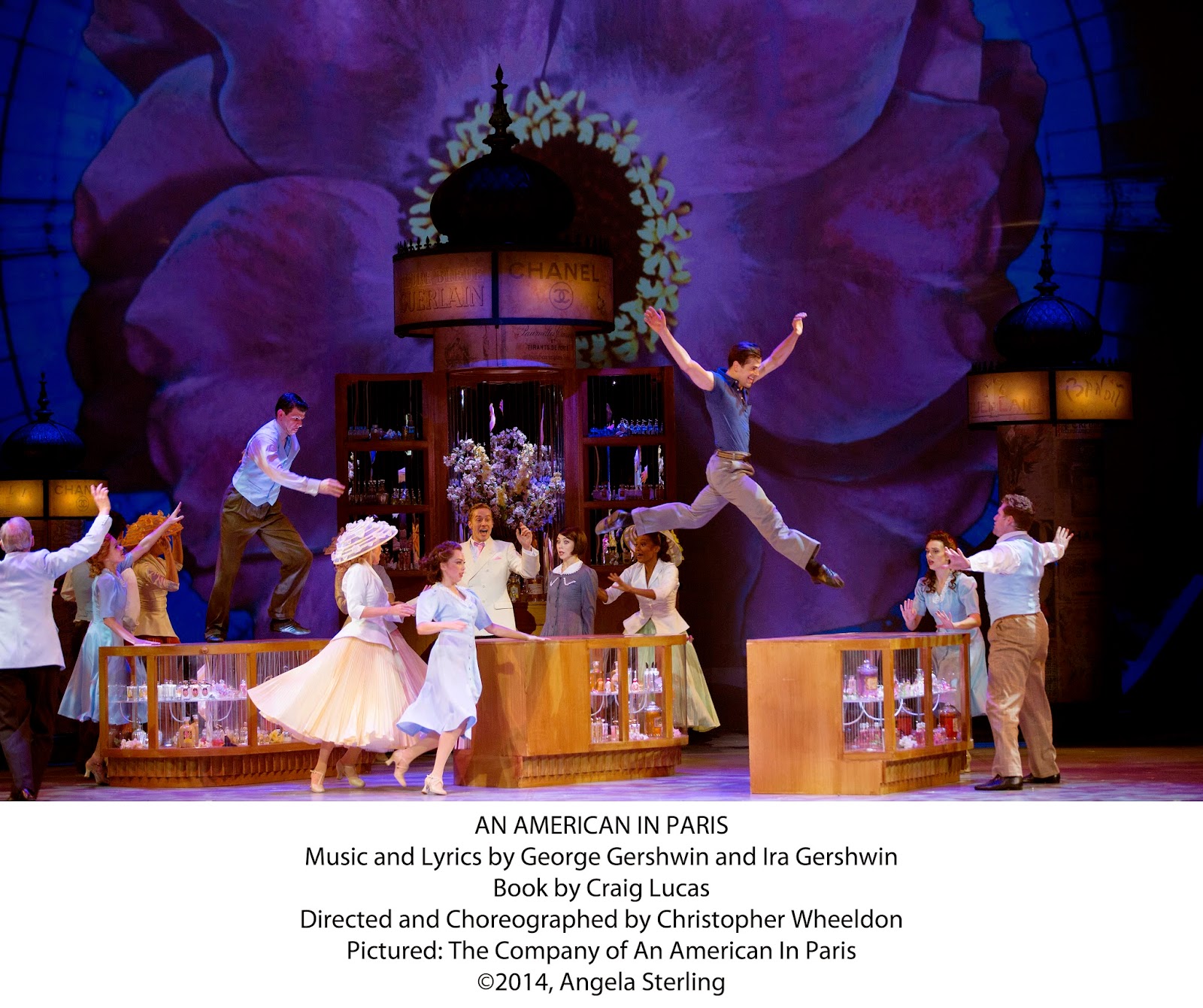 Mr. Lucas’s book follows much the same premise as that of the film (by Alan Jay Lerner) but alters it significantly enough to make it original in its own right, which may or may not be such a good thing. As in the movie, two young men in postwar Paris are in love with the same lovely French girl: Jerry Mulligan (Robert Fairchild, of the New York City ballet, in the Kelly role), an artist and former GI who stayed on in Paris after the war; and Henri Baurel (Max von Essen in the role played by French musical star George Guétary), an entertainer. The show adds Jerry and Henri's mutual friend, the gimpy war vet Adam Hochberg (Brandon Uranowitz in the Oscar Levant role, surnamed Cook in the movie), to the romantic mix, even though he stands apart from it in the film.

The chief women are Lise Dassin (Leanne Cope in the Caron role, surnamed Bouvier in the film), a promising ballerina who works in a perfume shop, and Milo Davenport (Jill Paice in the Nina Foch role), a wealthy American beauty interested in Jerry both as his patron and in romantic ways that help to complicate the plot, which is framed as Adam's narrative. 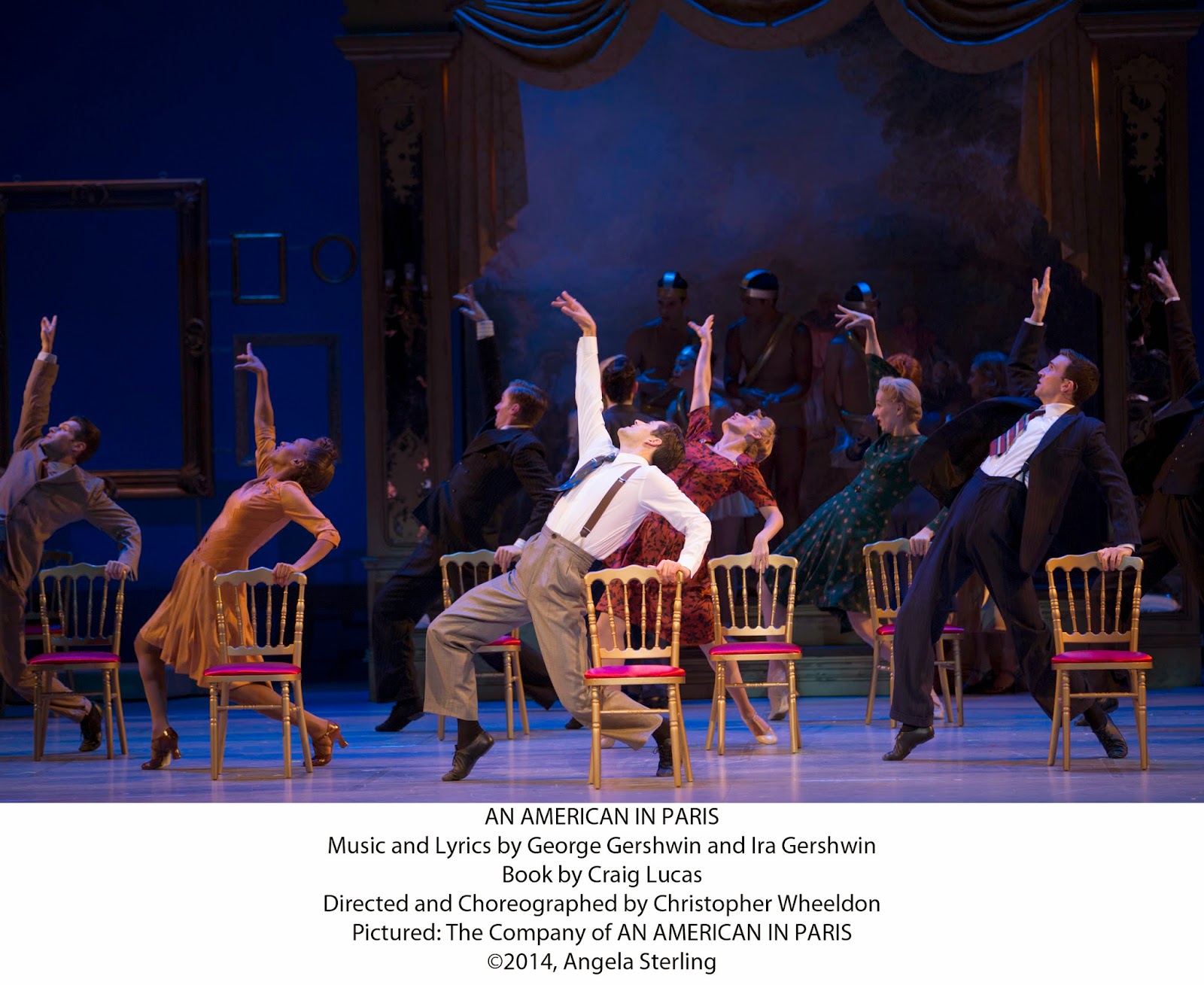 That plot, intended now to introduce things that might have made a 1951 audience uncomfortable, takes different twists, including explaining why George helped Lise during the war (note the change of her last name) and why she feels obligated to marry him despite being in love with Jerry. Unlike the original, Adam’s Jewishness is emphasized, and one of the men’s sexuality is briefly called into question. 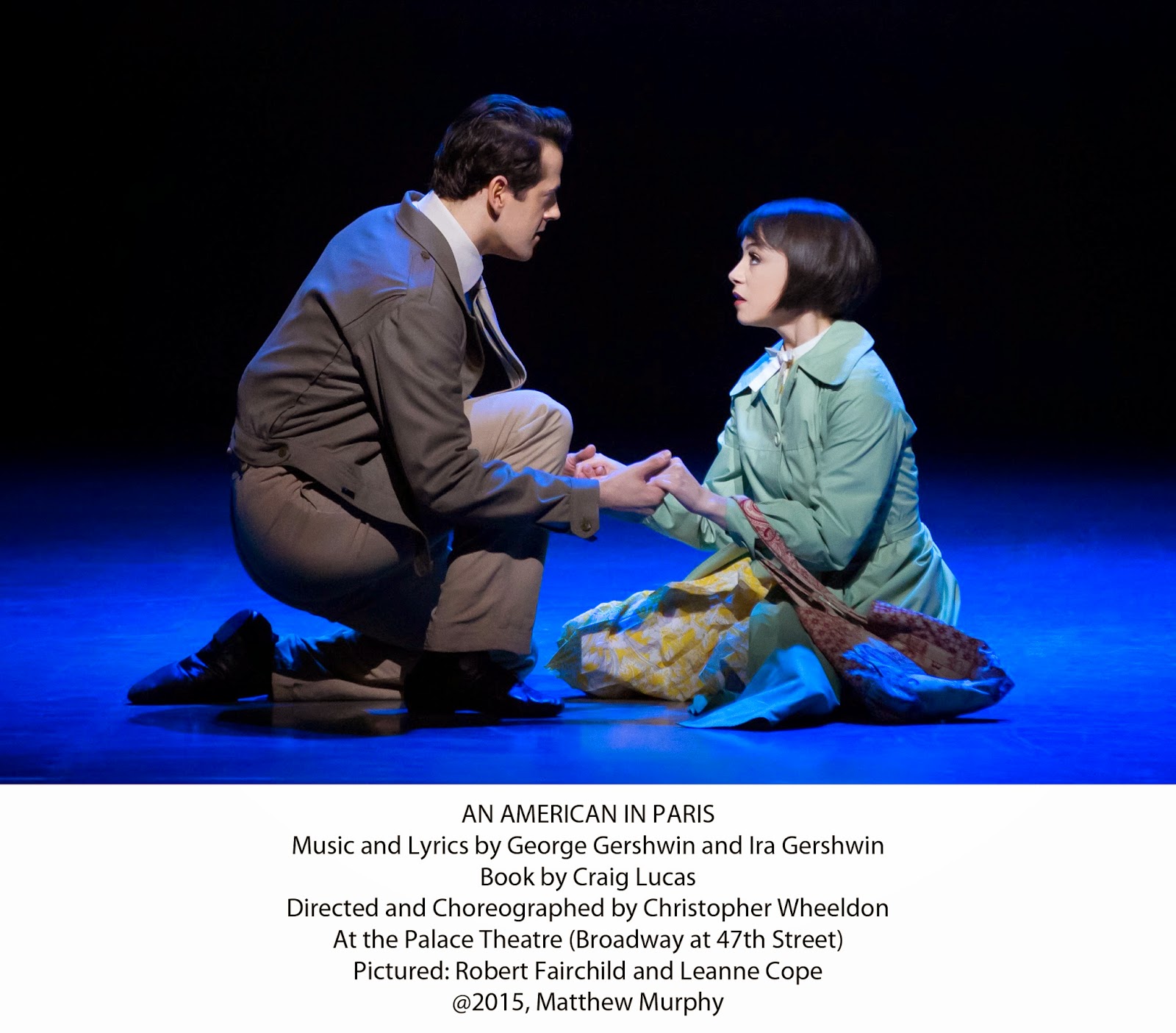 Despite such updated touches, the book, for all its attempts at humor and Parisian gaiety, often seems clichéd, and Mr. Lucas’s reliance for laughs on mangled French and English (“prick” for “trick” and the like) is leaden. Perhaps his principal alteration is the transformation of Lise from a shop girl into a rising ballerina, thus justifying the 16-minute ballet at the show’s conclusion. In the movie, it’s a dream, allowing Jerry and Lise to dance in multiple styles through a phantasmagoria of Parisian settings; one segment begins with Jerry posing like a famous Toulouse Lautrec subject who then comes to life in a gorgeously garish Lautrec cabaret.

The show, however, directed and choreographed by ballet luminary Christopher Wheeldon, transforms the sequence into a romantically lush but visually abstract one with dancers dressed in Mondrian-inspired costumes performing against a background of huge, colorful geometric shapes. The score may be the symphonic suite, “An American in Paris,” but there’s little that’s Parisian about what we see. And, most sadly, especially as their pas de deux is so lovely, Jerry dances with Lise only about one third of the time. Since he’s a painter, not a ballet dancer (apart from all his other dancing), he’s inserted as Lise’s fantasy, which she calls upon for inspiration mid-ballet. 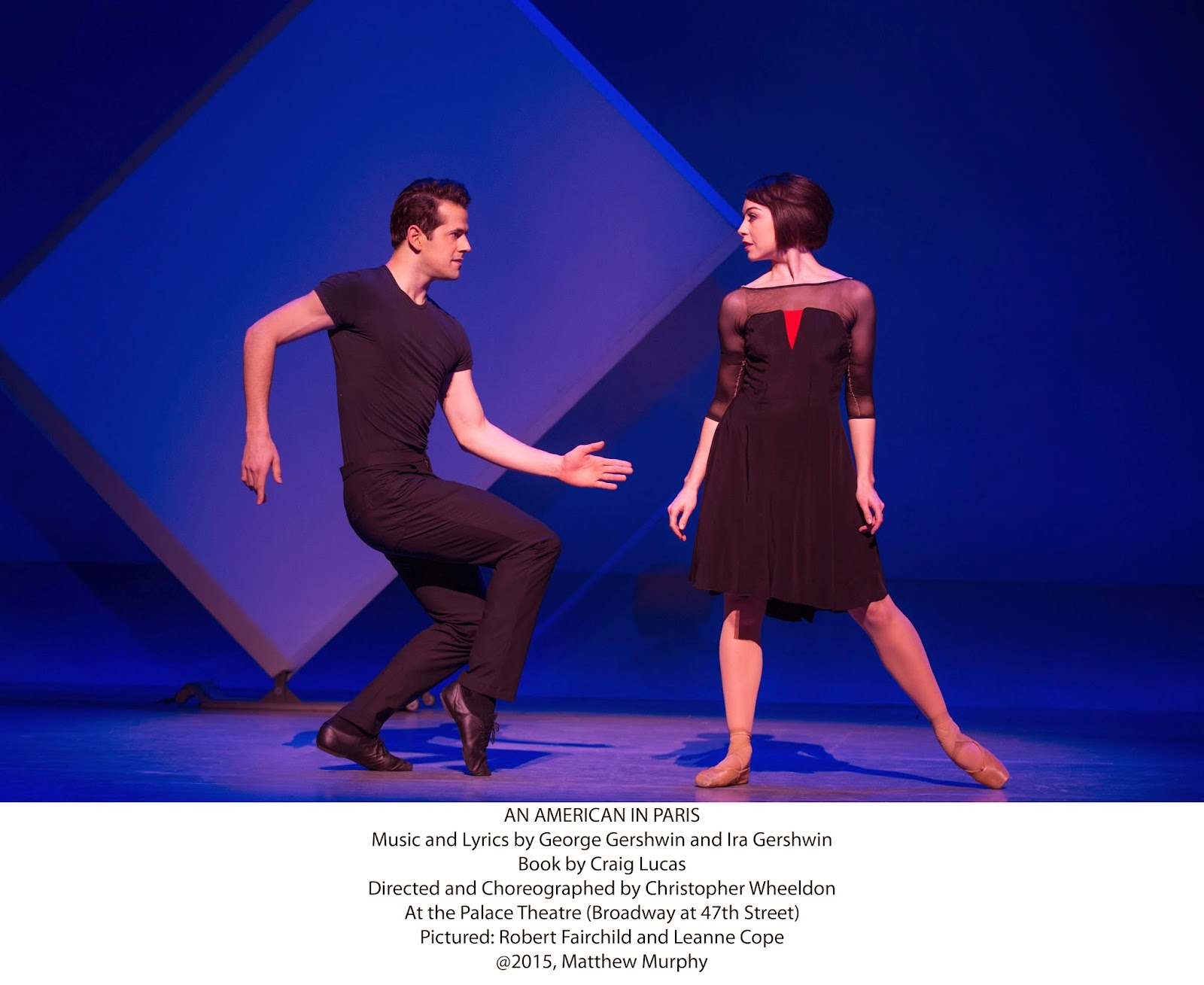 The ballet is certainly better integrated into the story now, with Jerry its designer, Adam its composer and conductor, and Milo its backer; however, the extraordinary variety and beauty of the movie version isn’t matched by director-choreographer Christopher Wheeldon’s otherwise admirable but insufficiently interesting take. Kelly was sui generis, but Mr. Fairchild, who doesn't tap but soars through the air as though his legs had springs in them, offers about as handsome, talented, and appealing a balletic replacement as possible; although a bit lightweight in the acting department, he has a pleasant singing voice, heard in several solos and company numbers. 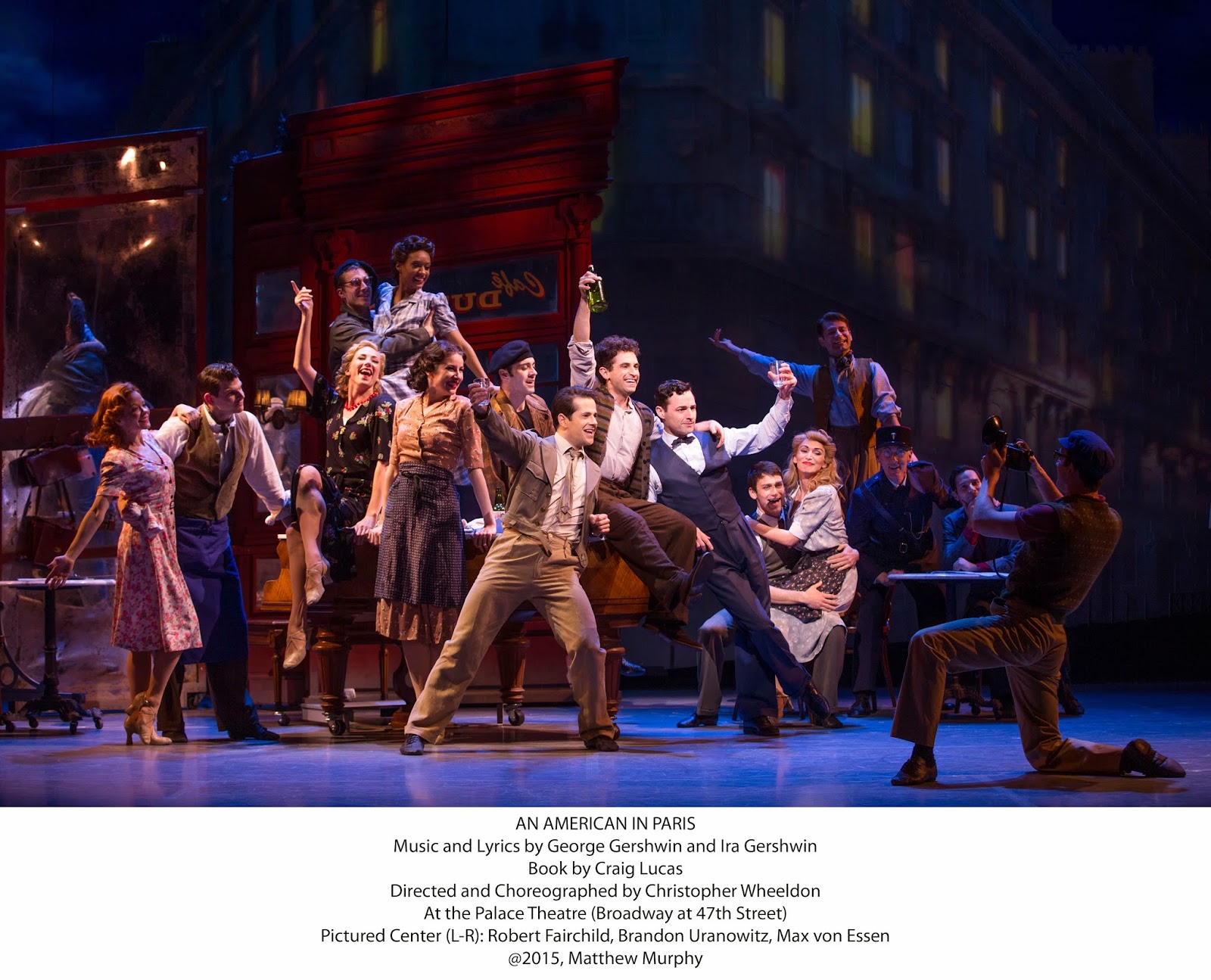 Ms. Cope’s role doesn’t require great acting, but this brilliant British ballerina (from the Royal Ballet), whose short black coif and roundish face brings to mind the Caron of LILI, is perfectly adorable, although her French accent (like all the others in the show) just makes it past the gate. She sings only one solo, “The Man I Love,” which she carries off surprisingly well, and her dancing in each of the show’s three ballets is wonderfully supple and distinctive; that, after all, is what makes her special.

Mr. von Essen’s bowtied Henri is suitably uptight and sexually ambivalent; he stands out in his big “I’ll Build a Stairway to Paradise” number. Mr. Uranowitz forces Adam’s New York Jewishness a tad, but, despite having no solos, he reveals the show’s best male voice on “But Not for Me” (shared with Ms. Paice) and other numbers. He and Mr. von Essen also display some serious tap dancing chops during “Stairway to Paradise.” Ms. Paice, dressed in a sequence of exquisite outfits, effectively projects Milo’s hauteur, and she sings and dances with panache. For droll comic delivery, the show is fortunate to have the delightful Veanne Cox playing Henri’s wealthy mother, the comically stuffy Madame Baurel, a role—like that of Monsieur Baurel (Scott Willis)—not in the movie.

Everything in this iteration takes place in 1945, right after the war, instead of a few years later, which the film seems to suggest, allowing for opening dance sequences that show a dark picture of Parisians in need, and even a moment when the mob catches a female collaborationist. However, the darkness soon fades and the City of Light sheds its glow on the romantic complications enacted in bistros, shops, riverside haunts, dance studios, art galleries, fancy residences, cabarets, and ballet stages.

The movie itself, shot on a Hollywood soundstage, is an imagined vision of Paris landmarks, romance, and culture, and no one can mistake for real locations the deliberately theatrical fakery of its award-winning art and set decoration. On Broadway, Bob Crowley’s similarly theatrical sets, using numerous rolling units moved by actors, allow for the fluidity needed to swiftly move the action from locale to locale, while being enhanced by the awesome projections of 59 Productions. Crowley’s period costumes further augment the show’s visual beauty, as does Natasha Katz’s memorable lighting.

Three years ago, Nice Work if You Can Get It proved that the Gershwins remain a timeless attraction for Broadway audiences, even when coupled with a less than outstanding book. The two and a half-hour show's book is not its strong suit, but its music, décor, dance ensemble, direction and choreography (despite my reservations), and leading performers (especially Ms. Cope and Mr. Fairchild), may help An American in Paris climb that stairway to Broadway paradise.
AN AMERICAN IN PARIS
Palace Theatre
1564 Broadway
Open run