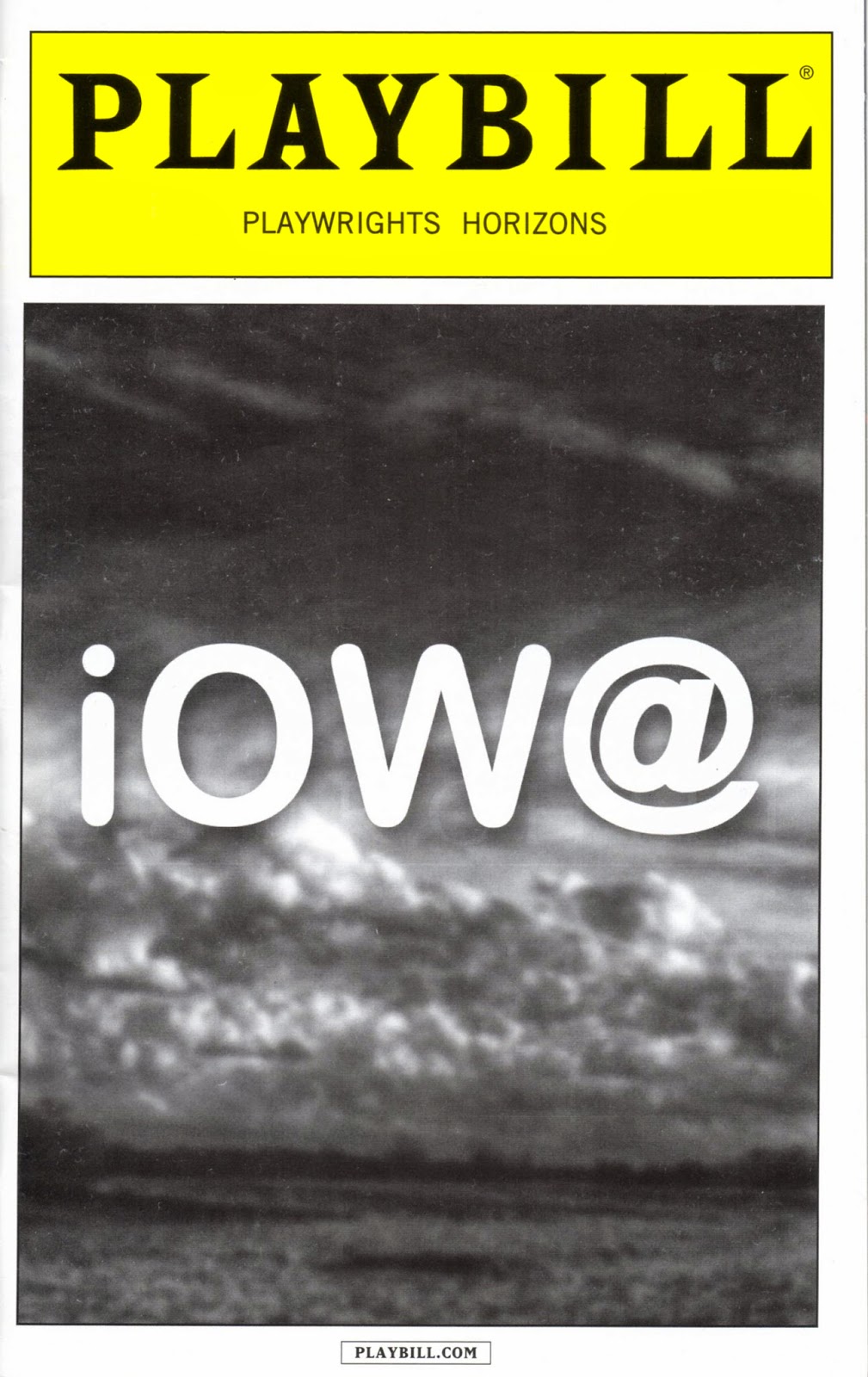 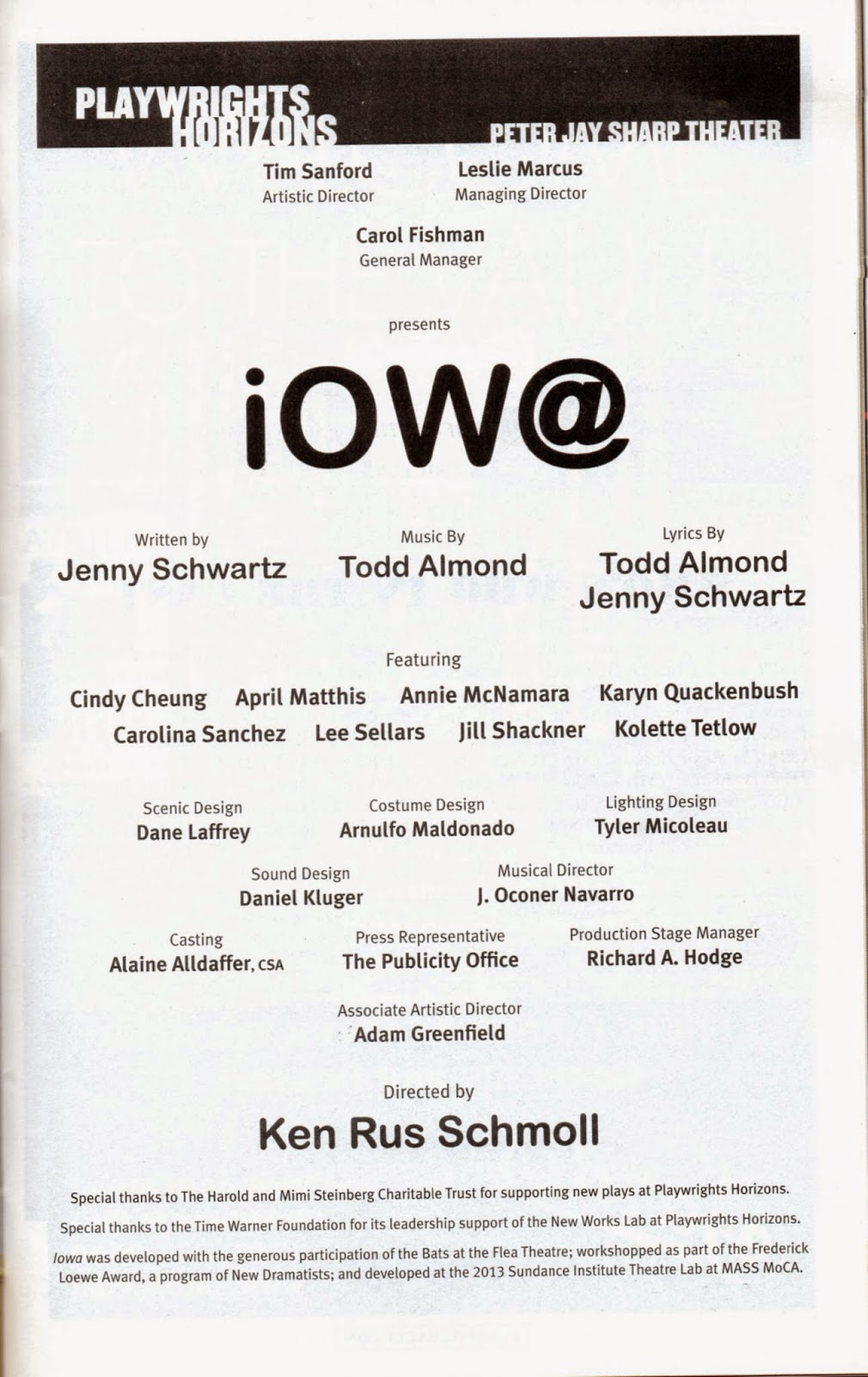 
IOW@, whose too-precious-for-words spelling on the program I’ve seen rendered as IOWA in articles, reviews, tickets, and even on the show's website, is a too-precious-for-words, hour and 45-minute musical play that began as a 20-minute one-act. It took on musical life when playwright Jenny Schwartz got together with composer Todd Almond to workshop it at the Flea Theatre and elsewhere and see how well it worked with songs. What evolved was this surrealistic mishmash of performance styles and vaguely expressed themes about American life today that will appeal only to very special tastes; not mine, however. 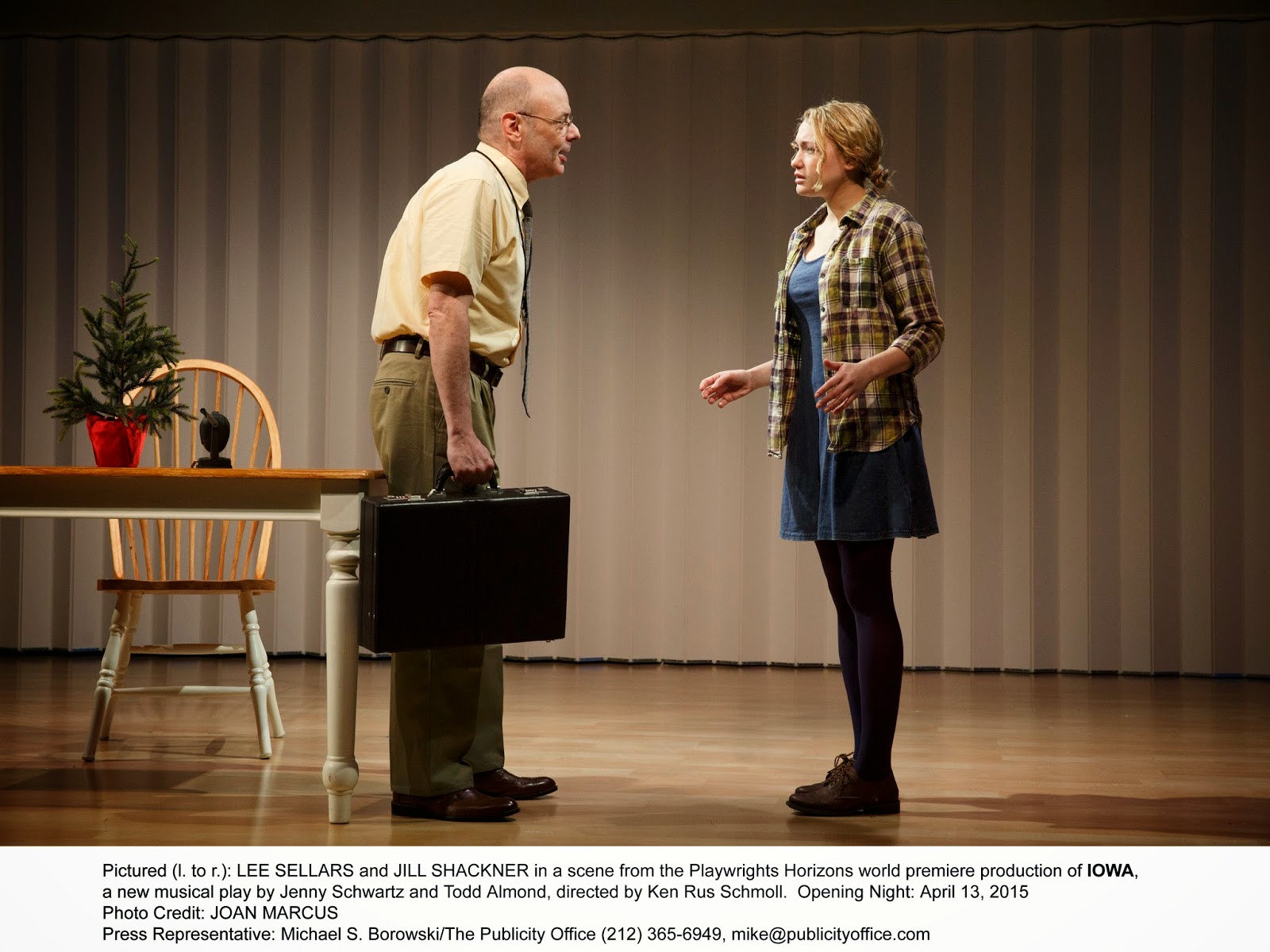 Ms. Schwartz and Mr. Almond’s muddy work (I’d call it a farce if I laughed more than once, and a musical if it had enough music to warrant that description) tells of Becca (Jill Shackner), a 14-year-old with an attractive, cougarish, divorced mother, Sandy (Karyn Quackenbush). Sandy, who can neither get her daughter’s name right (she calls her Bookah, Burqa, whatever) nor her age (she thinks it's 12), is something of a nut job; she’d be more at home in a bowl of almonds (oh, wait, that’s the composer’s name) than on the stage. The plot takes off when she decides to marry Roger, her Facebook catch, whom we hear via a Skype connection on her laptop, but don’t get to meet until the final scene. 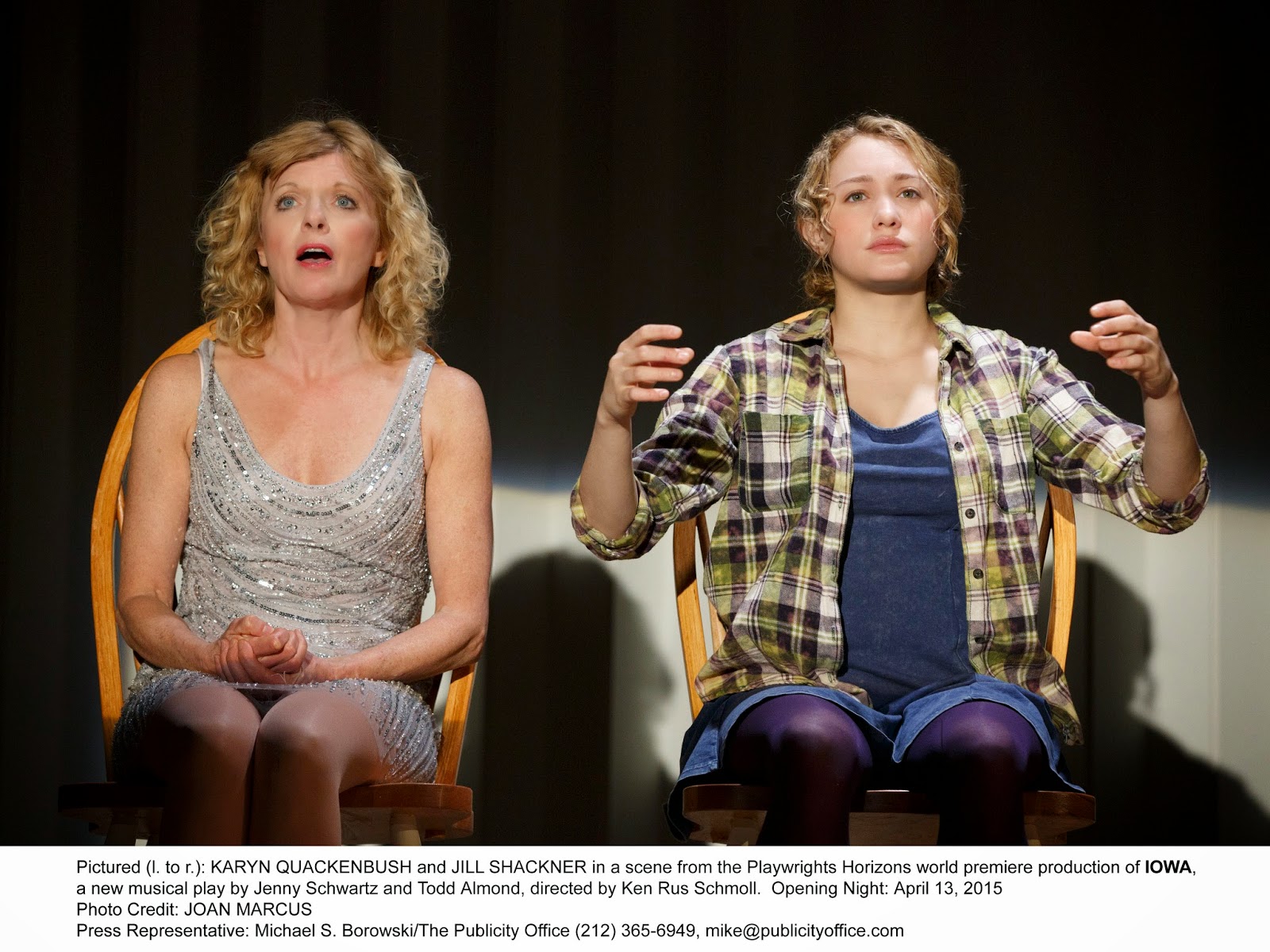 Roger lives in Iowa (without the @), so Sandy and the distressed Becca will be moving to the Hawkeye state, requiring Becca to leave her friends and her high school, represented by her bald, middle-aged, math teacher, Mr. Hill (Lee Sellars), for whom she has a thing. Her BFF is the bulimic Amanda (Carolyn Sanchez), and she also befriends a Valley Girlish cheerleader (Annie McNamara), with whom she gets high. Figuring in the murky mélange as well is fictional icon Nancy Drew (April Mathis), here updated as a “hot” African-American (we also meet a Jewish Nancy [Ms. McNamara], a Latina Nancy [Ms. Sanchez], an Asian Nancy [Cindy Cheung], and a transgender Nancy [also Ms. Cheung]). 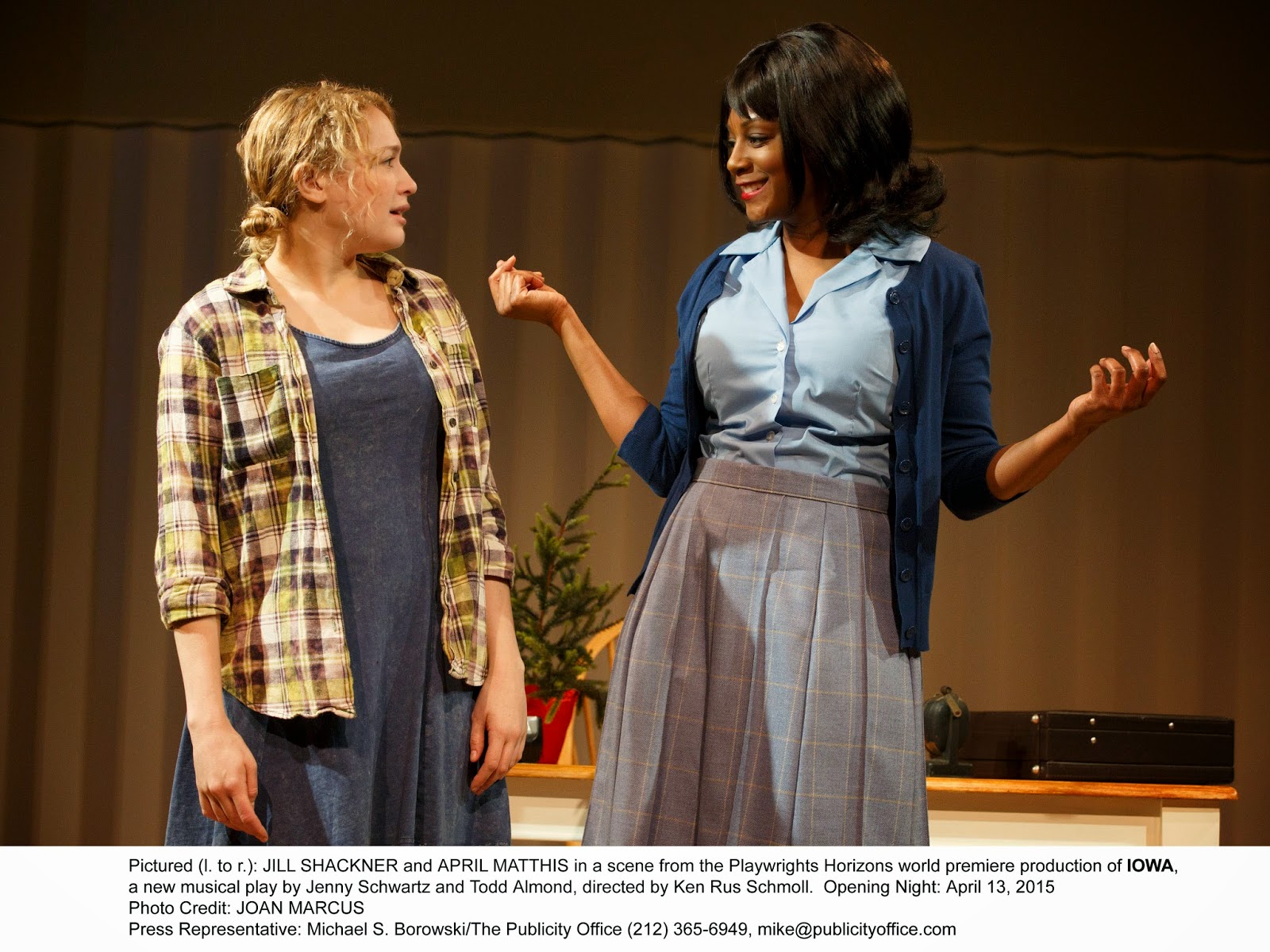 Because Sandy likes ponies, a singing one (Mr. Sellars), dressed in a natty suit, a Danny Kaye mop of red hair, a tail, and hooves on his hands and feet, prances in whenever her equine affinity arises. The pony’s hot to trot so he has sex with the cheerleader, but doesn’t use protection, leading to my single laugh when he says it’s because he couldn’t find one that fit. There’s also Becca’s dad (Mr. Sellars), living in London with his British-Asian fiancée (Ms. Cheung), who shows no interest in taking Becca in after his fiancée mentions she’s pregnant. When Sandy and the finally resigned-to-go Becca reach the blue skies and cornfields of Iowa and meet Roger, he turns out to be the polygamous husband of four sister wives (Mses. Sanchez, Mathis, McNamara, and Cheung), although the word “Mormon” is never breathed. By the way, Sandy at one point wears a burqa, the cheerleader eats hay, and there’s a little girl who wants to go to Mars. 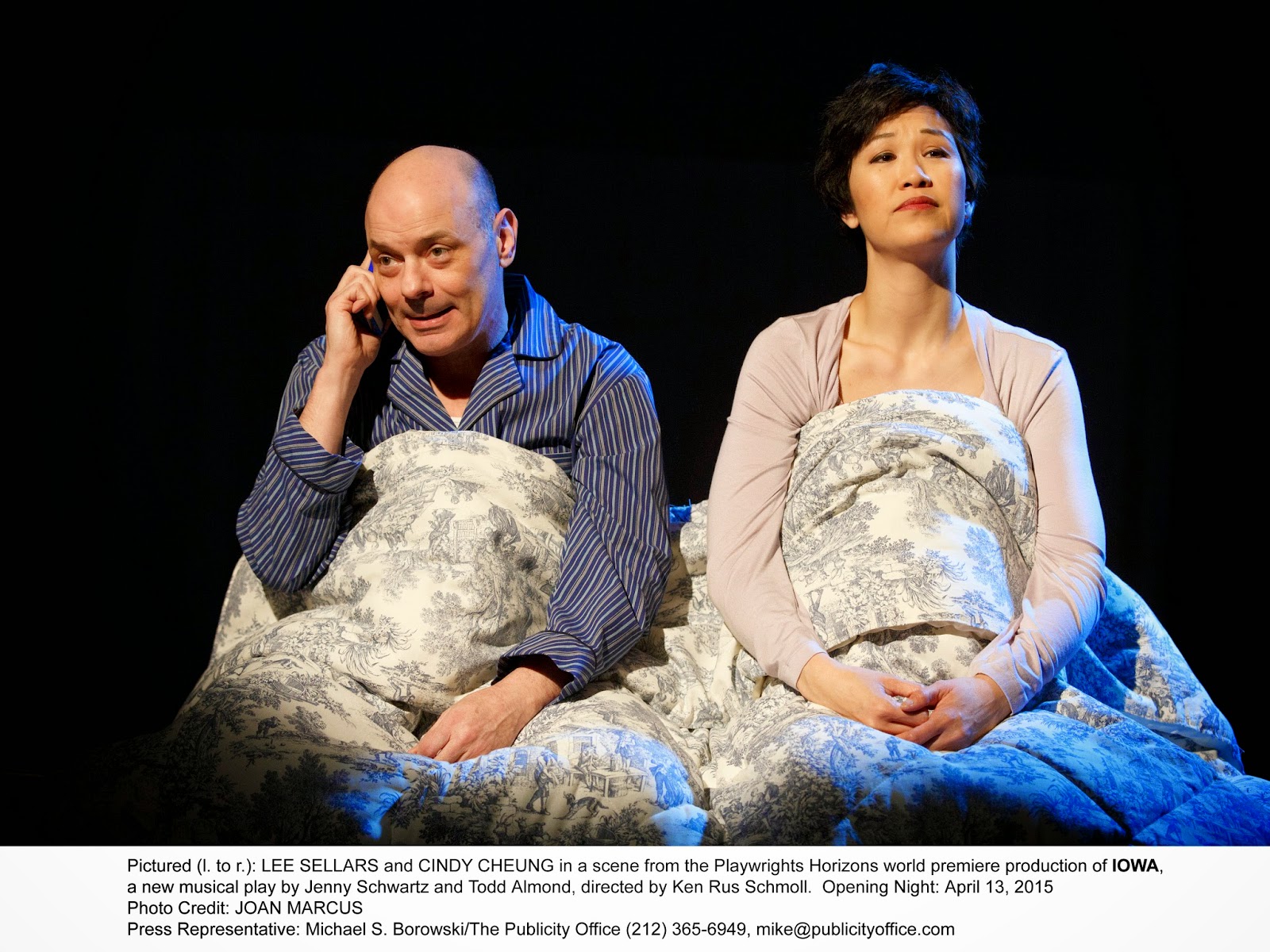 Becca’s journey, structured around scenes of home, school, and Iowa, uses language that often rushes along in a river of stream-of-consciousness free association, using quirky word play that, while impressive in the abstract, removes the characters and situations from any sense of reality. Much of it is clever, but none of it’s tied to anything emotionally affecting. 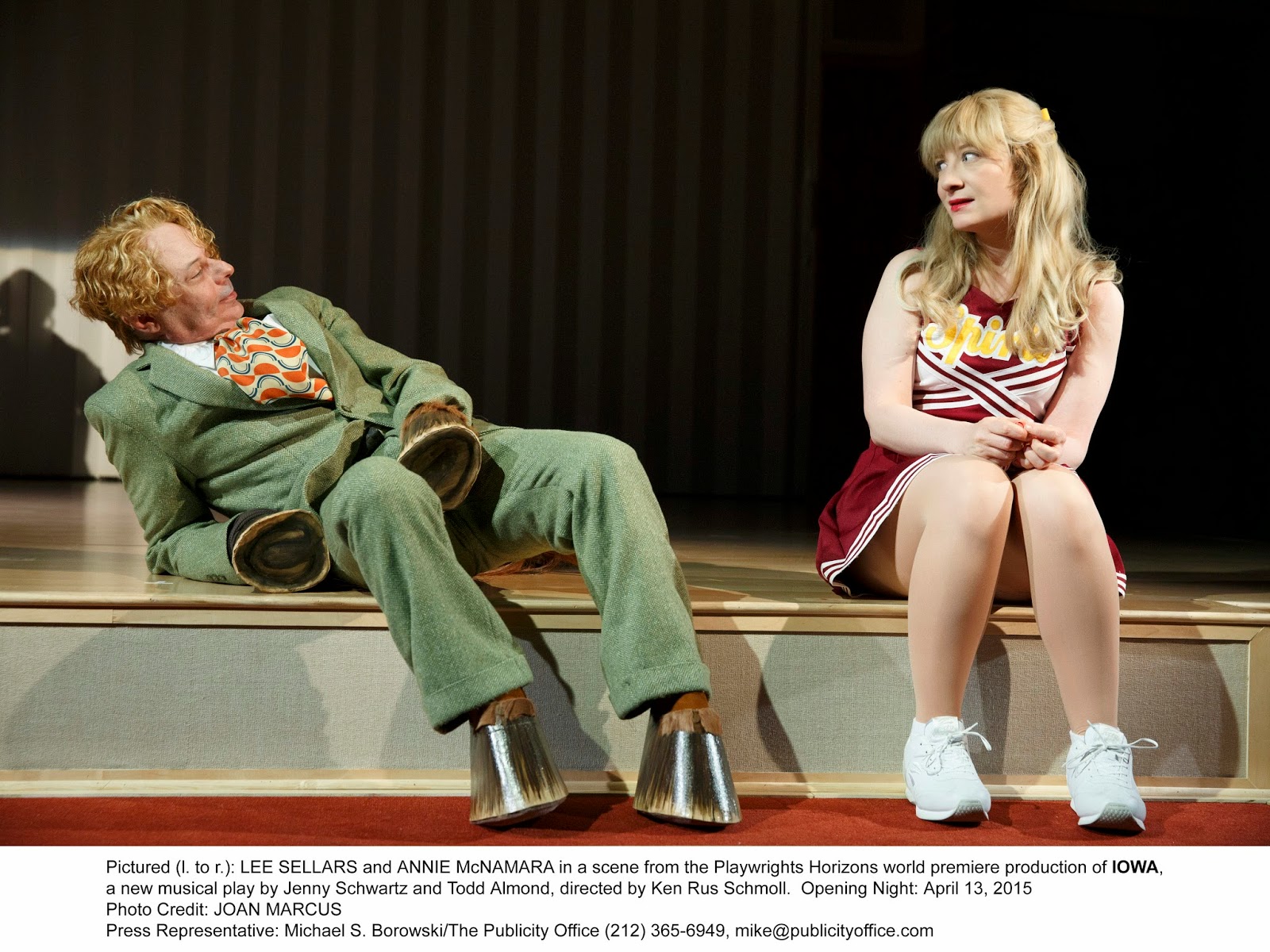 Ken Rus Schmoll’s overheated direction underlines and exaggerates the craziness, and you may, like the couple next to me, choose to depart after the first 20 minutes during much of which Sandy rambles on at Mach-speed in a logorrheic, endless outpouring of antic dialogue shouted like a demented Gilbert Gottfried. Meanwhile, Becca and Amanda stand nearby, facing the audience and speaking more like Gottfried-clones than human beings, with occasional infusions from Roger on the laptop. 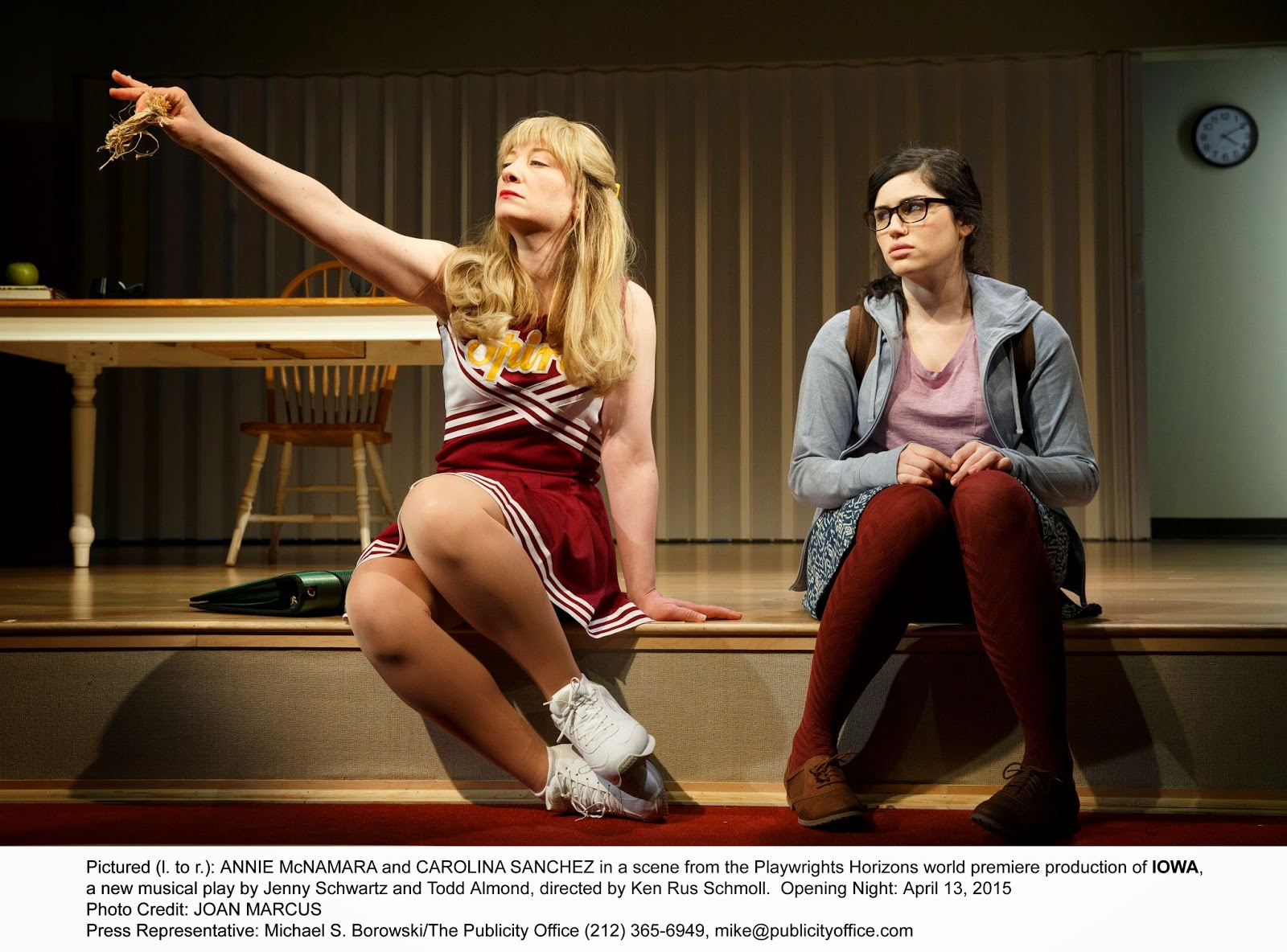 Soon enough, the nonsense quotient builds to the point that you don’t really care anymore about who these people are and why you should be concerned about them, which is a shame, because not only are there are ideas and feelings present that might have been worth considering, but each member of the company (including the adorable young Kolette Tetlow who plays Becca as a child) is highly talented and clearly committed to the material, no matter how bizarre or ridiculous much of it may seem. 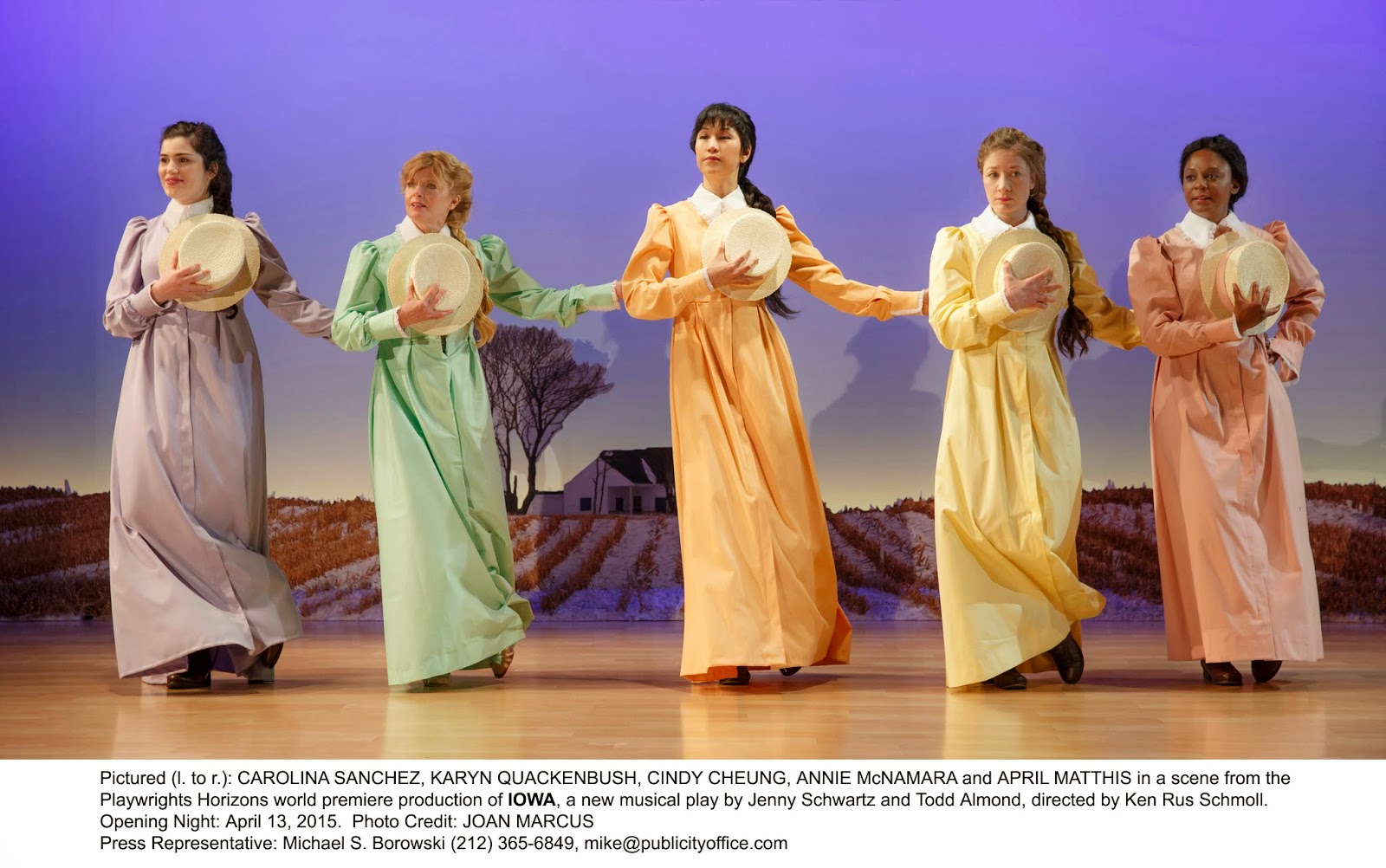 Sitting upstage right on Dane Laffrey’s essentially neutral set of a polished wood floor and a backdrop of vertical blinds (that eventually open to reveal an Iowan landscape), is a bass, viola, and piano trio to accompany the songs, few of which stand out amid the weird shenanigans. Arnulfo Maldonado’s costumes are all worthy, especially the pony’s and the long, pastel-colored dresses of the sister wives. None of this, of course, prevents one from wondering why oh why oh why-@ Playwrights Horizons chose to produce IOW@. 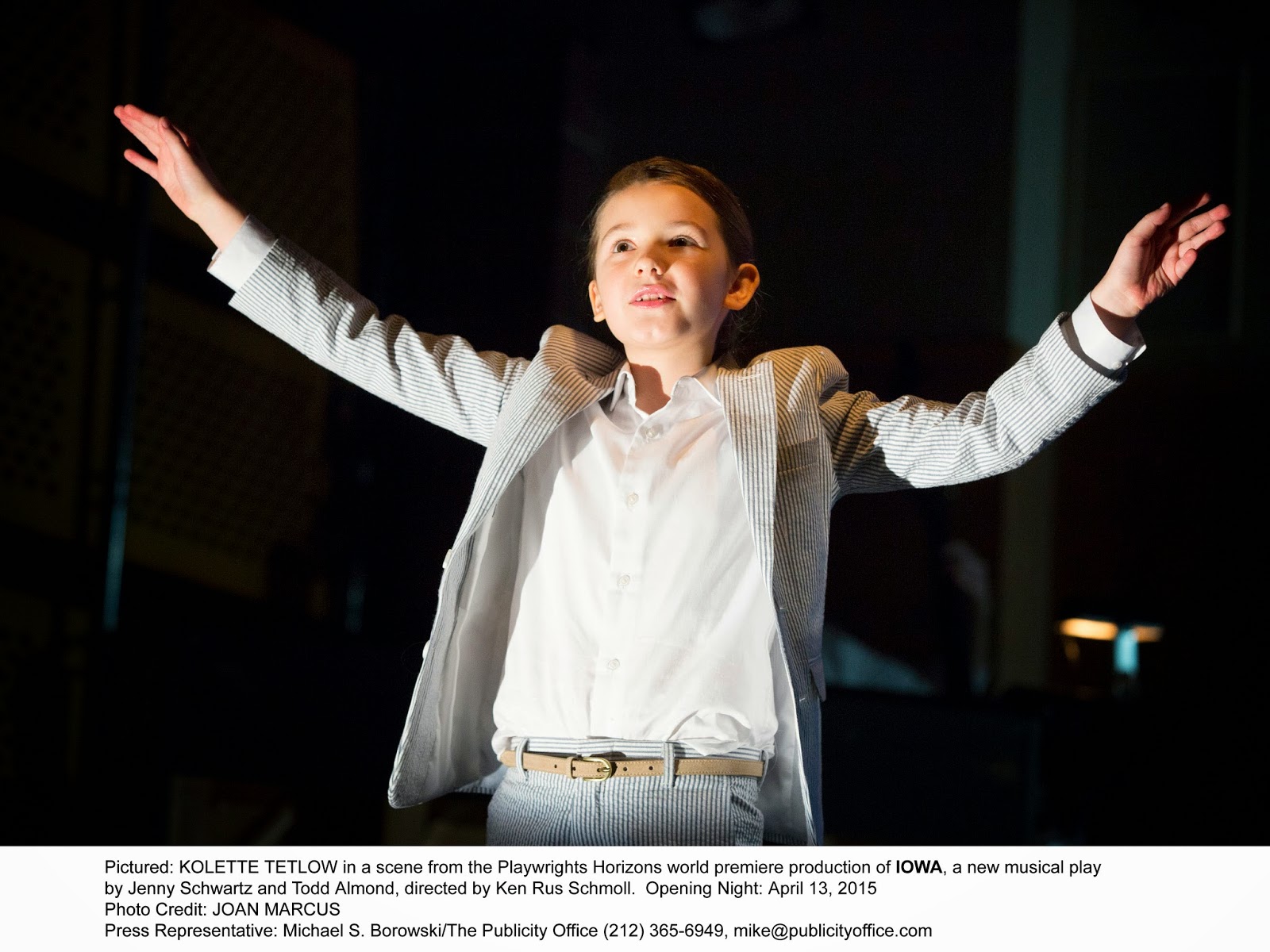