"Helter Skelter on the Delta" 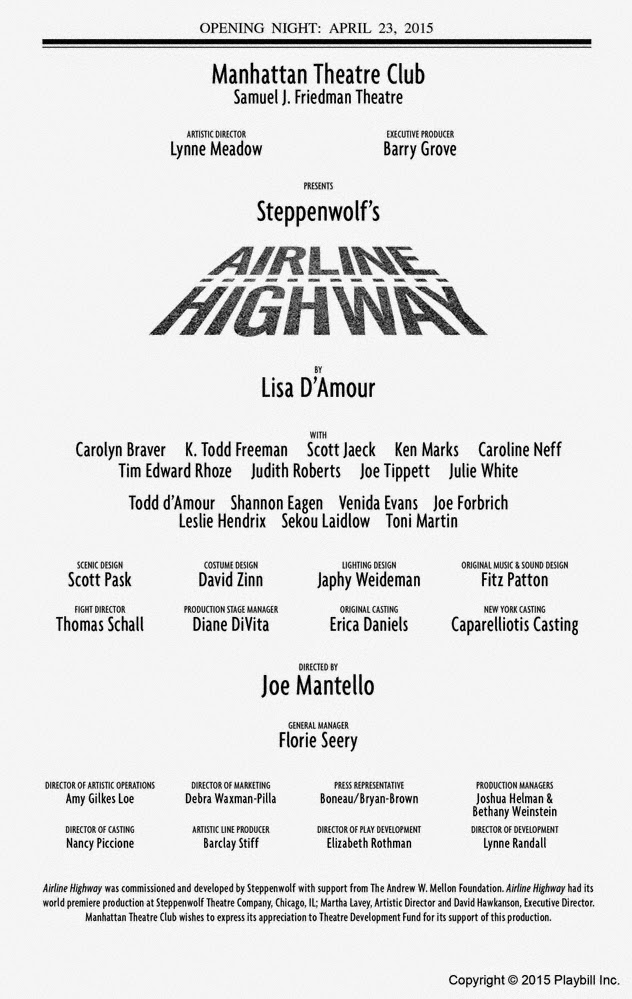 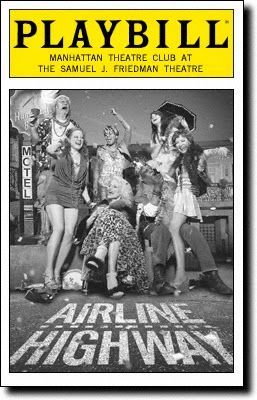 As I watched AIRLINE HIGHWAY at a recent preview, I knew in my bones that this ambitious, well-performed jambalaya of a play by Lisa D'Amour would sharply split critics and audiences. Two friends I ran into during the intermission were deeply unhappy, while their son, an architect, joyously held both thumbs up. Not wishing to commit yet, although I was definitely on the side of the architect's parents, I expressed ambivalence, saying I needed to see the second act before making up my mind. Sorry to say, act two only deepened my disappointment.

AIRLINE HIGHWAY was originally staged for Chicago’s Steppenwolf Theatre by Joe Mantello, whose excellent production, with certain cast changes, is now being given under the aegis of the Manhattan Theatre Club. It’s set in the parking lot of the Hummingbird Motel, a shabby, down-at-heels resort, once bright pink, now faded beige, located on the eponymous road leading out of New Orleans toward Baton Rouge. Ms. D’Amour, who lived for many years in New Orleans, uses this crumbling motel as the locus for what is essentially a paean to the city’s lively down and outers, the strippers, hookers, burlesque performers, junkies, bartenders, karaoke wranglers, and sexually unconventional denizens who make their living, such as it is, in the French Quarter hangouts catering to the city’s large tourist trade. 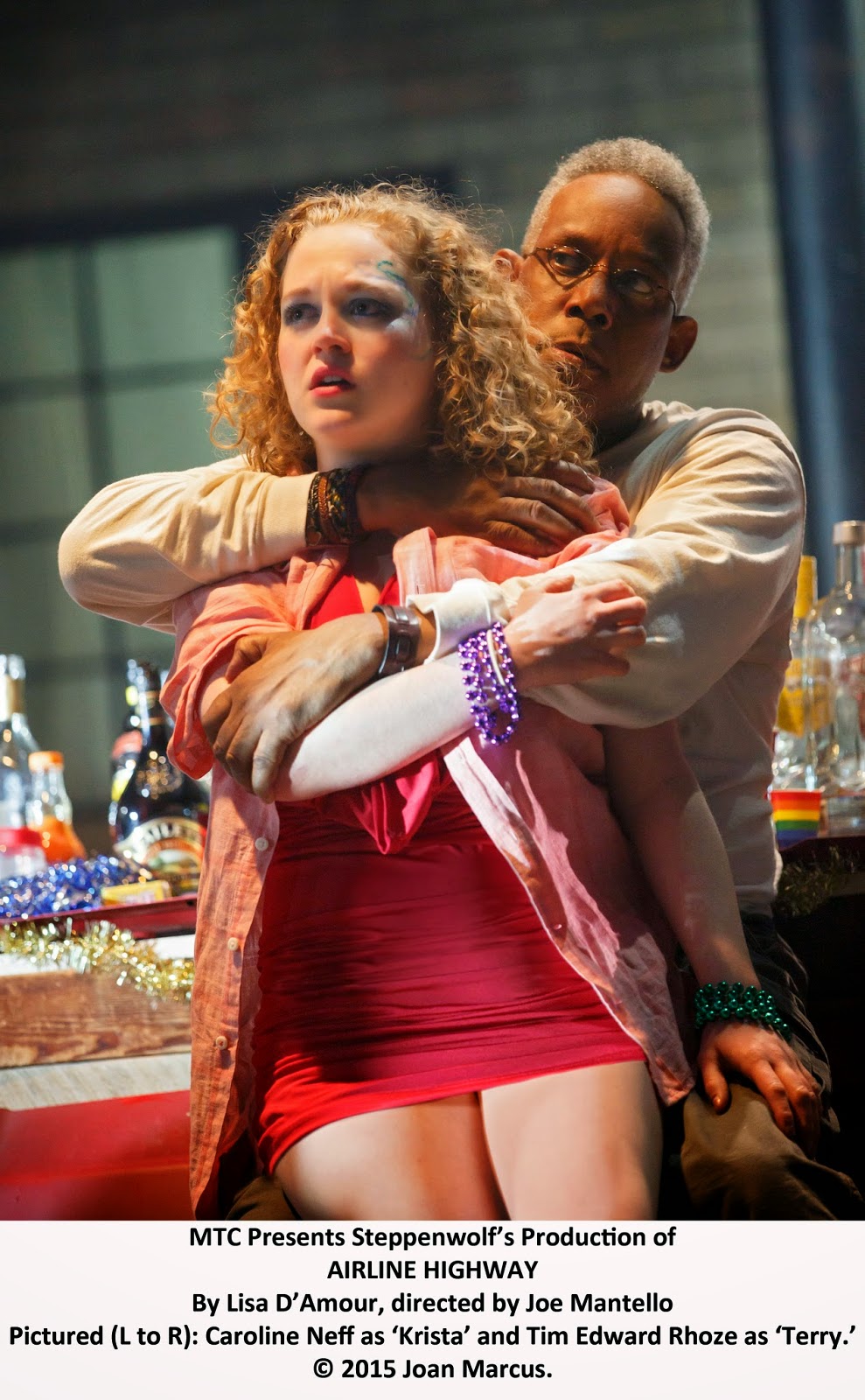 AIRLINE HIGHWAY is essentially an atmospheric, character-driven drama in the vein of numerous hotel or barroom plays, like THE HOT L BALTIMORE and THE TIME OF YOUR LIFE, with only the flimsiest of plots or dramatic tension. Set during the city’s annual Jazz Fest, it introduces us to nine mostly troubled souls, with the world around them populated by an ensemble of minor players who busy up the place and give it that uniquely sleazy Big Easy ambience. 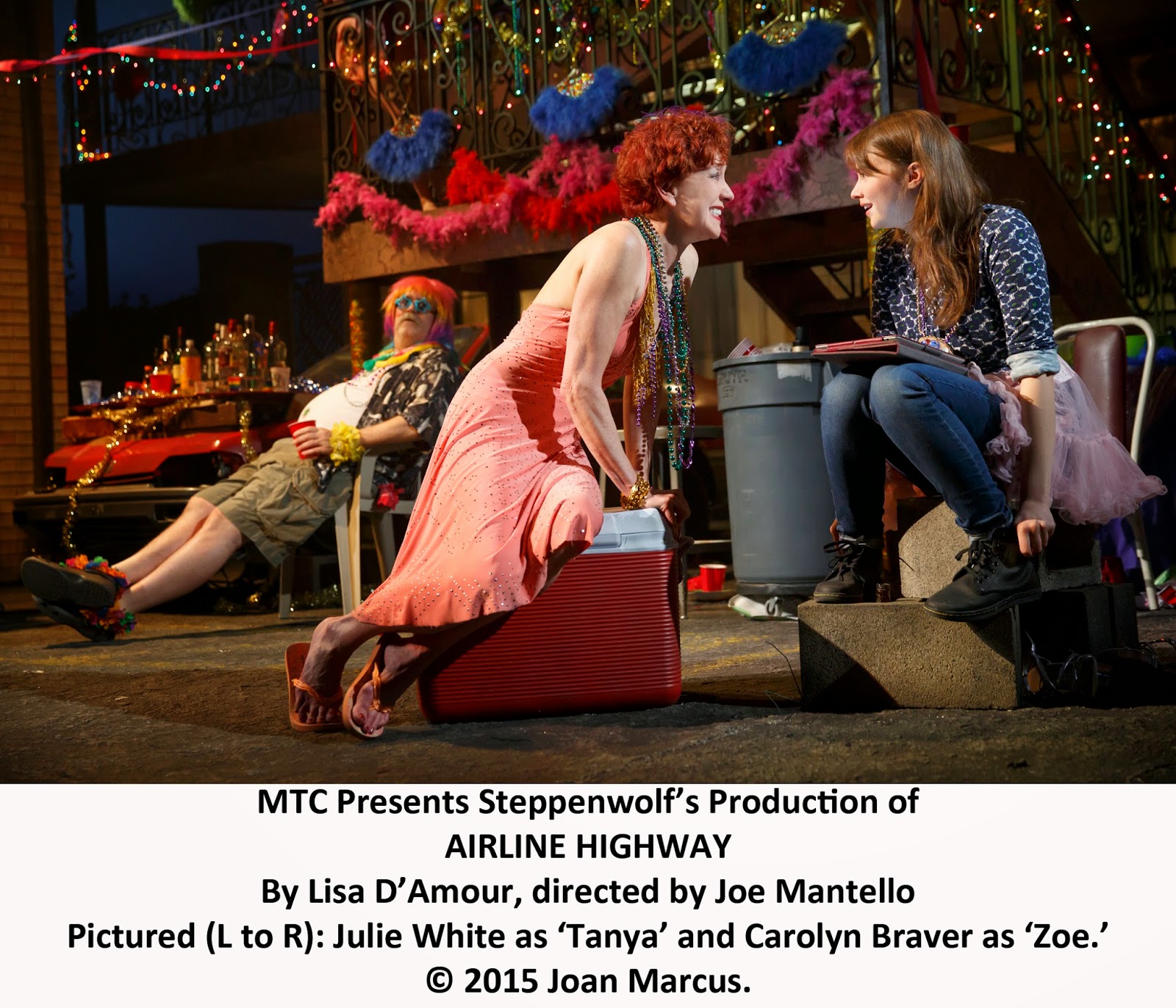 Living or working at, sponging off, or visiting the Hummingbird are the middle-aged Wayne (Scott Jaeck), the longtime manager, who fears it may soon be sold to encroaching developers; Francis (Ken Marks), a grizzled poet with a beatnik vibe, who gets around on a bike he built himself; Tanya (Julie White), an aging prostitute with a painkiller jones; Terry (Tim Edward Rhoze), a black handyman, not too competent, always trying to get Wayne to pay him for fixing something around the joint; Krista (Caroline Neff), an emotionally volatile 30ish stripper, practically homeless after being evicted for being too far behind in her rent; Sissy Na Na (K. Todd Freeman), a sharp-tongued, black transvestite bartender and karaoke wrangler who brooks no fools; Miss Ruby (Judith Roberts), a dying, former burlesque queen in her mid-80s, who ran her own Bourbon Street club and whom everyone idolizes for her wisdom and support; Bait Boy (Joe Tippett), a hunky guy in his 30s, formerly a karaoke wrangler, bouncer, and the like, who fled the place and changed his ways to fit an upscale lifestyle with a well-heeled Atlanta woman, a step for which few—especially Krista, who still carries a torch for him—are readily forgiving; and Zoe (Carolyn Braver), Bait Boy’s presumed 16-year-old stepdaughter, who comes with him to the motel so she can interview the residents for a sociology project about subcultures. 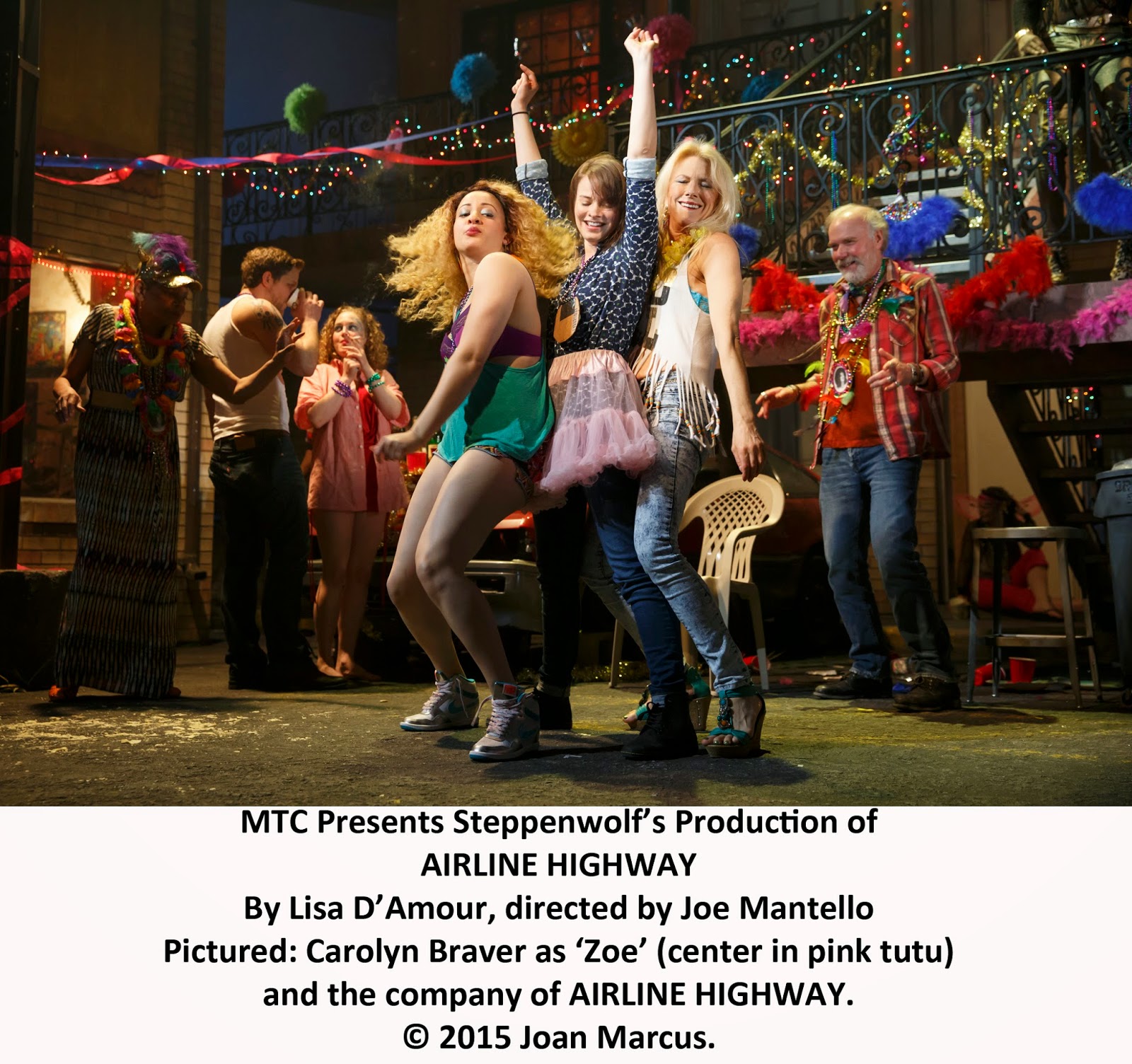 Ms. D’Amour’s characters—each (not just the whore) with a proverbial heart of gold—may not be educated, but they’re all, in their way (including Zoe), preternaturally wise, articulate, and kind. They speak a poetic prose that marks them more as creatures of the stage than life. There are no villains, so to speak, and the chief dramatic clash concerns the presence of Bait Boy (real name Greg, nicknamed because of his reputed fondness for jail bait), considered to have betrayed the community by leaving it for a better life. There seems to be a message here that his grabbing the brass ring of middle-class comfort when he had the chance was an act of selfishness that somehow cast a shadow over everyone he thereby left behind. Bait Boy, himself uncomfortable with his choice, eventually pays a price, after he and Zoe return home, but the entire situation seems contrived to give the play a modicum of conflict. The same could be said of making 16-year-old Zoe a transcriber of the indigenous natives’ lives in order to induce narrative exposition explaining who they are. Listening to some of Zoe's hifalutin responses makes you think of Margaret Mead trapped in a teenybopper’s body. 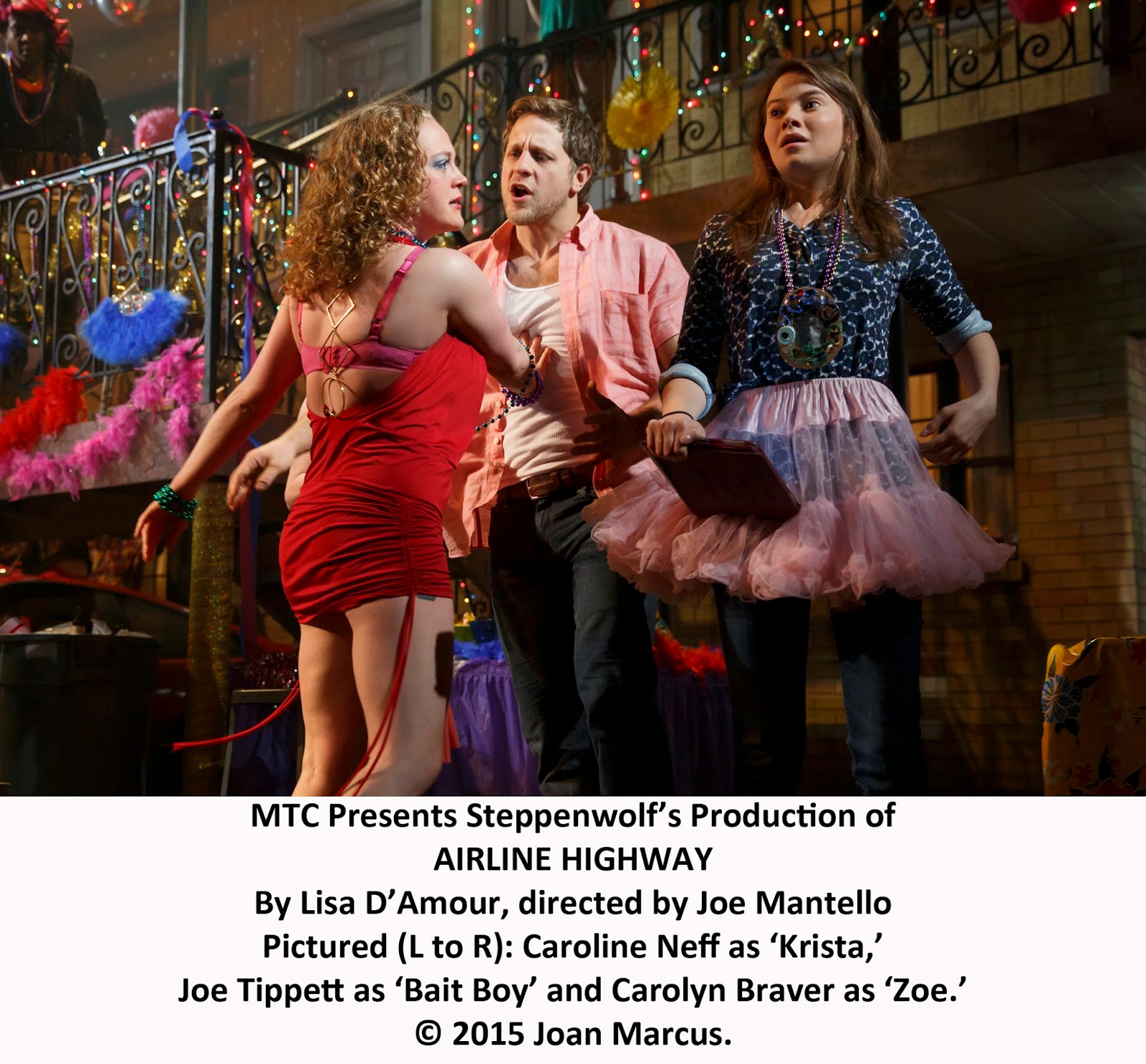 The chief reason for bringing all these folks together is to celebrate Miss Ruby’s funeral, which she wants held while she's still alive so she can hear “the nice things that people had so say about” her. Before we meet her, the flashily dressed and made-up congregants spend much of act two in the parking lot, now festooned with Mardi Gras-like decorations, celebrating, with upbeat dancing and music. Finally, after much buildup, Ruby's carried down the staircase from her second-story room on a gurney, garishly made up and wearing a flaming red wig over her strikingly white hair. Although she's only fitfully compos mentis, she gets a magic realism moment in which to discourse briefly on her philosophy of life, centering on the ecstasy of being liberated by sex, and then says some endearingly patronizing words to her worshipers about how they’ve fouled up their lives, which, like Catholics seeking absolution, they’re only too happy to imbibe. 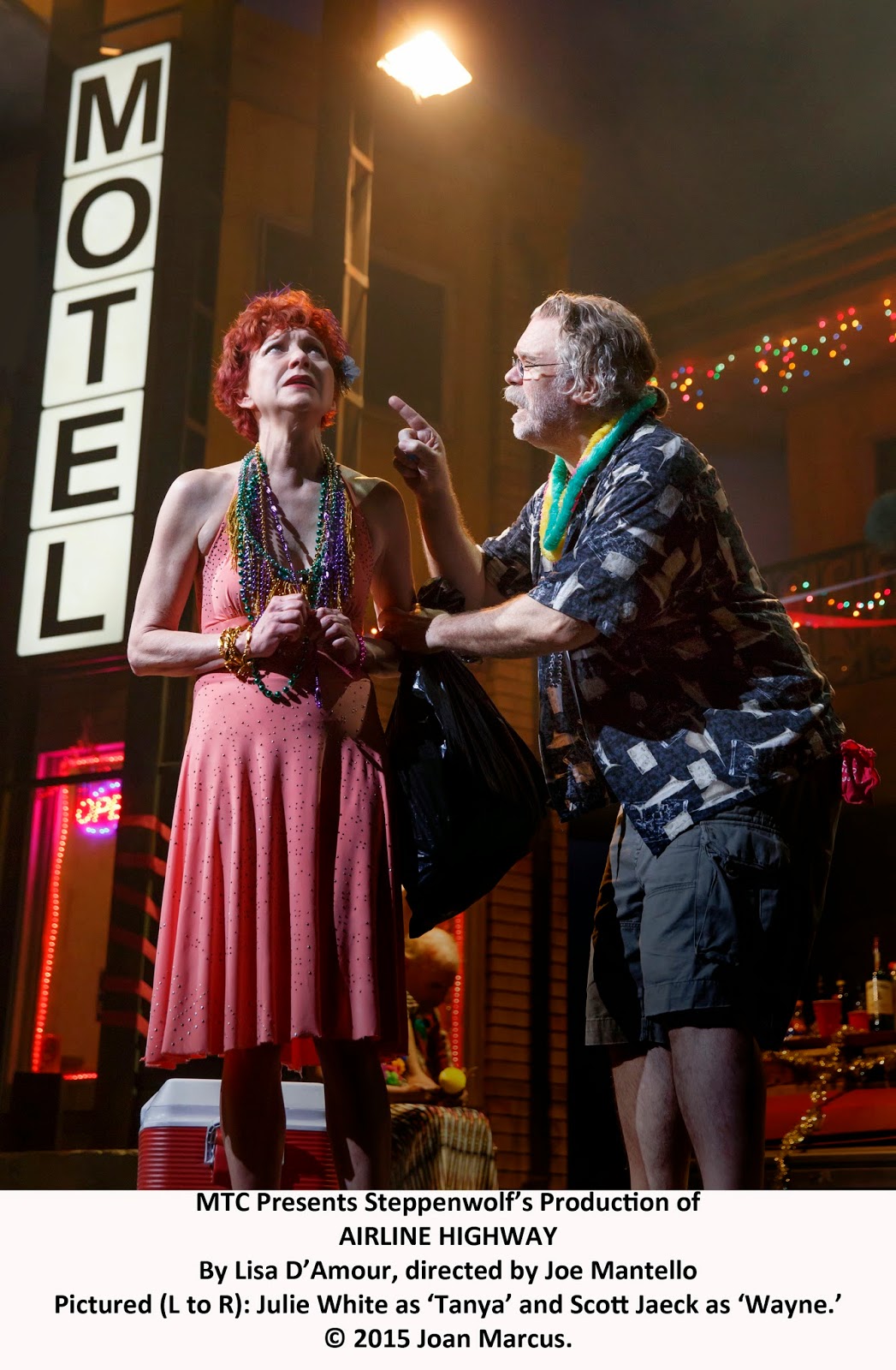 The pretentiousness of the speech reminded me of the old joke about the person who goes through all sorts of hardships to ask a wise old guru the meaning of life. In one of the many variations, the old guru answers: “The meaning of life is . . . a fountain.” The questioner then describes all he’s gone through to ask his question, finishing with, “And all you have to say is, life is a fountain?” To which the monk responds: “Life is not a fountain?” 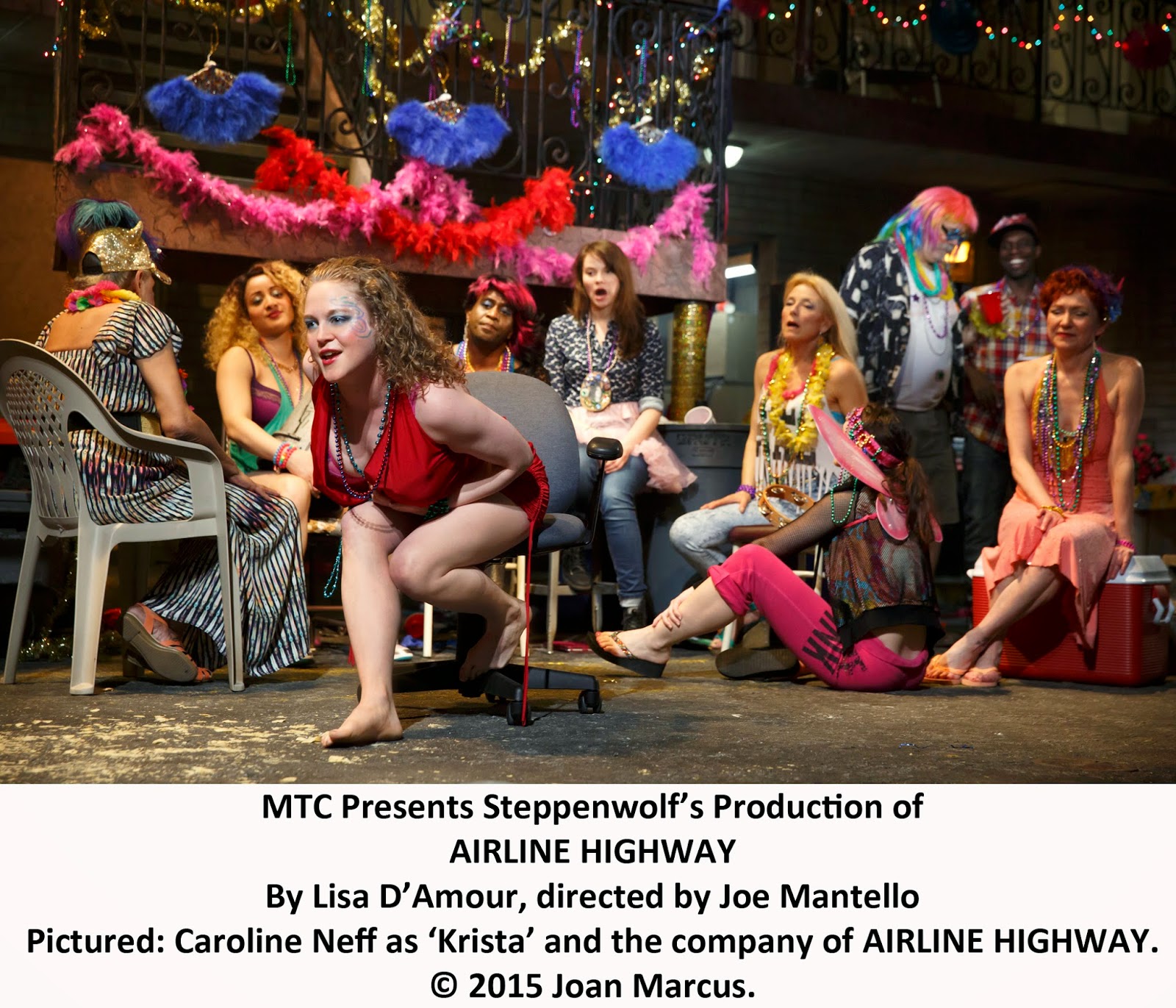 We must take on faith the premise that Miss Ruby somehow gave “this gorgeous group of fuck ups” a reason to live, helping them when they were in need and treating them with compassion when they suffered. This is a family of believers, in fact, who sustain their belief through rituals, such as the dancing and singing they perform in honor of Miss Ruby, the living/dead deity they worship. They will continue to suffer and feel pain, but they’ll always have the memory of Miss Ruby to adulate, and one another to ease the anguish. 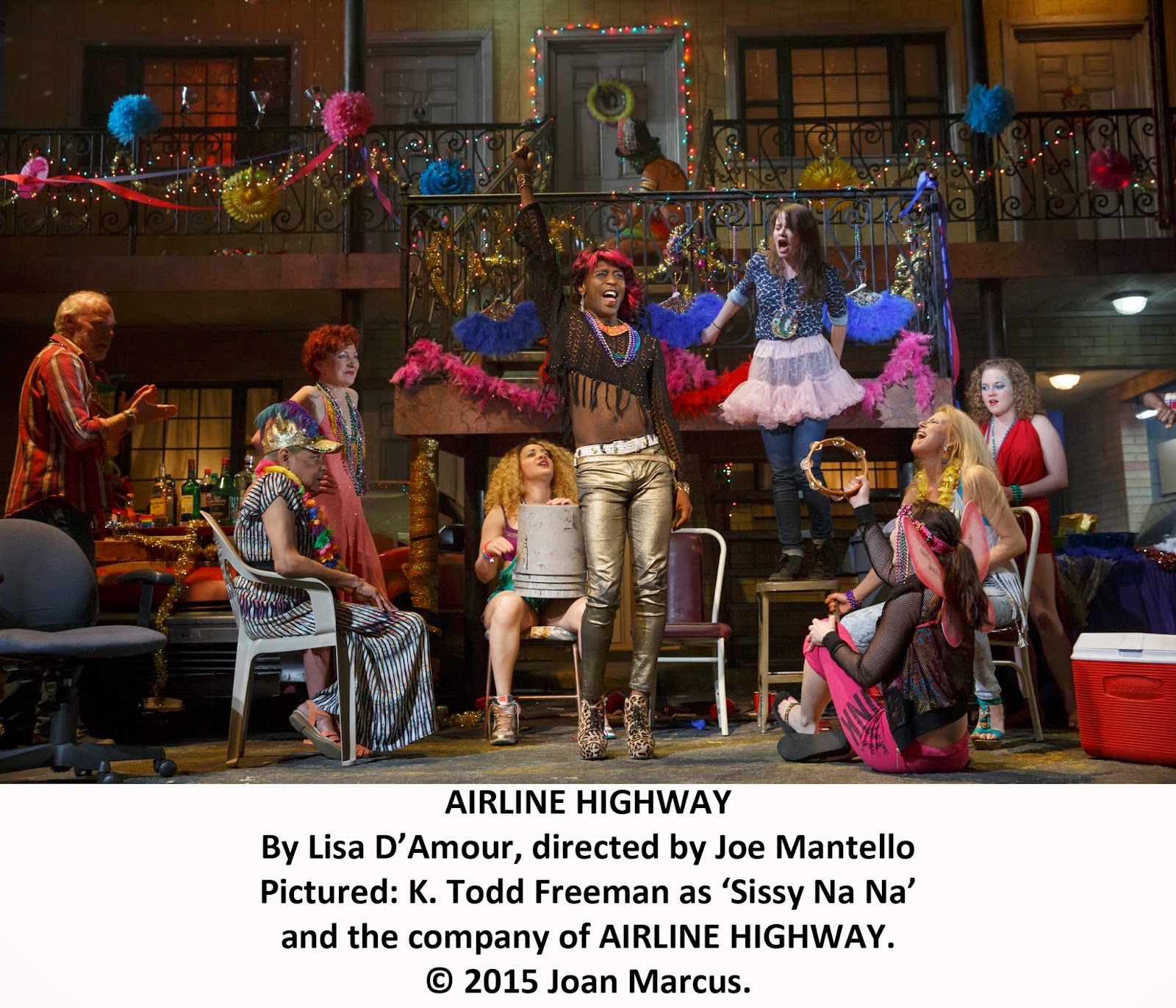 The physical production can’t be faulted, with its realistic parking lot (designed by Scott Pask), dilapidated sign, junk car up on blocks, and two-story motel, all of it atmospherically lit by Japhy Weideman. David Zinn’s costumes, especially the wild ones worn during the party sequence, conjure up the New Orleans feeling of chintzy glitz, and Fitz Patton’s music and sound design are in the same spirit, although you won't hear Dixieland in the mix. All the performances shine equally in this ensemble effort, with White and Freeman making the most vivid contributions. 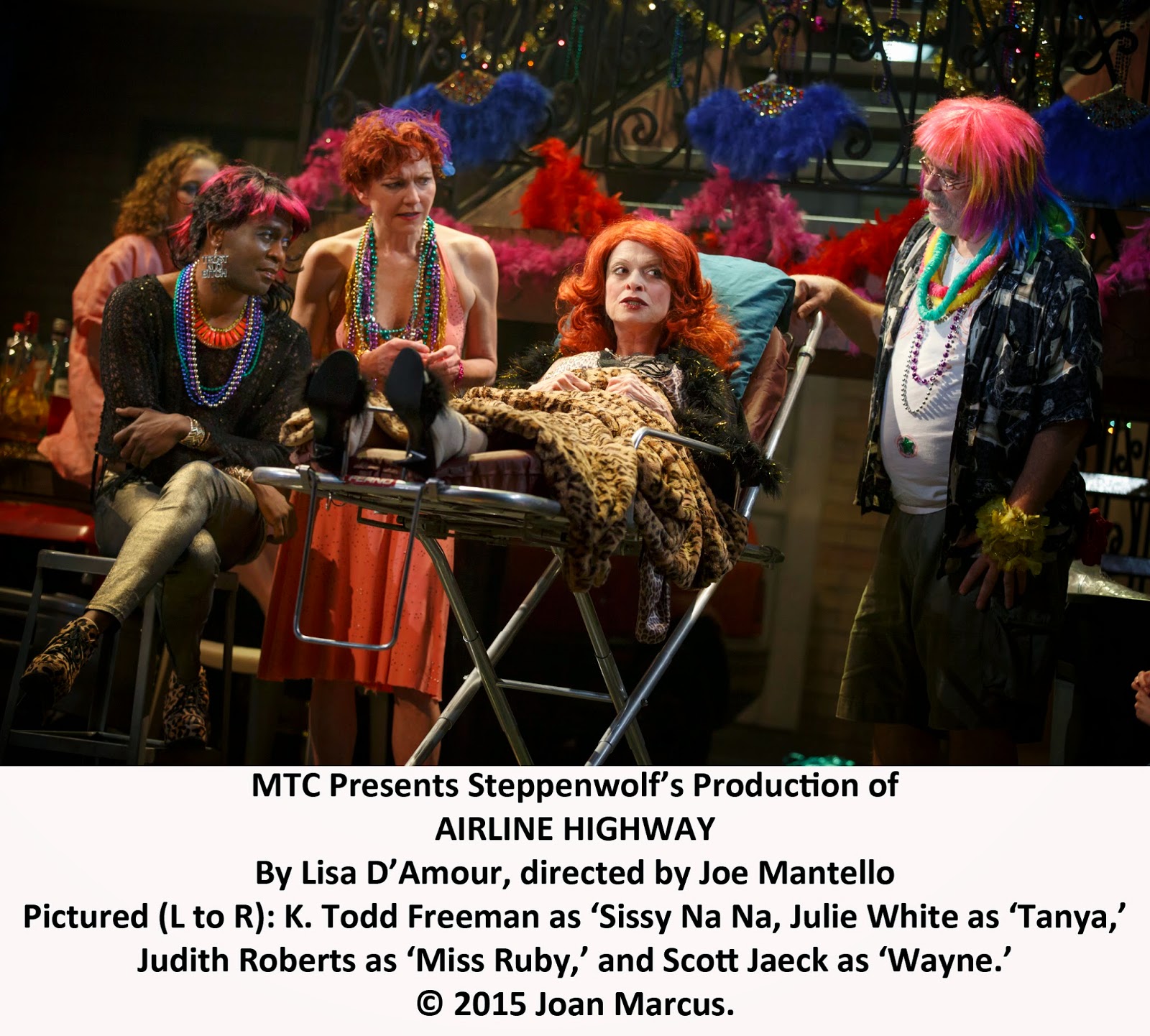 Ms. D'Amour, the only female playwright with a new play on Broadway this season, tosses too many characters into her jambalaya, and fails to season the stew with enough sustaining dramatic interest. The intersecting character lines are heightened by an excess of overlapping dialogue, sapping the play’s focus. At one point, Francis says, “the center will not motherfucking hold,” which is a pretty good description of the play. When the muscular Bait Boy doffs his shirt to prowl about in a wife beater, it’s hard not to think immediately of another play with a virile, undershirted man set in this steamy delta city, and to understand how much AIRLINE HIGHWAY suffers by comparison. 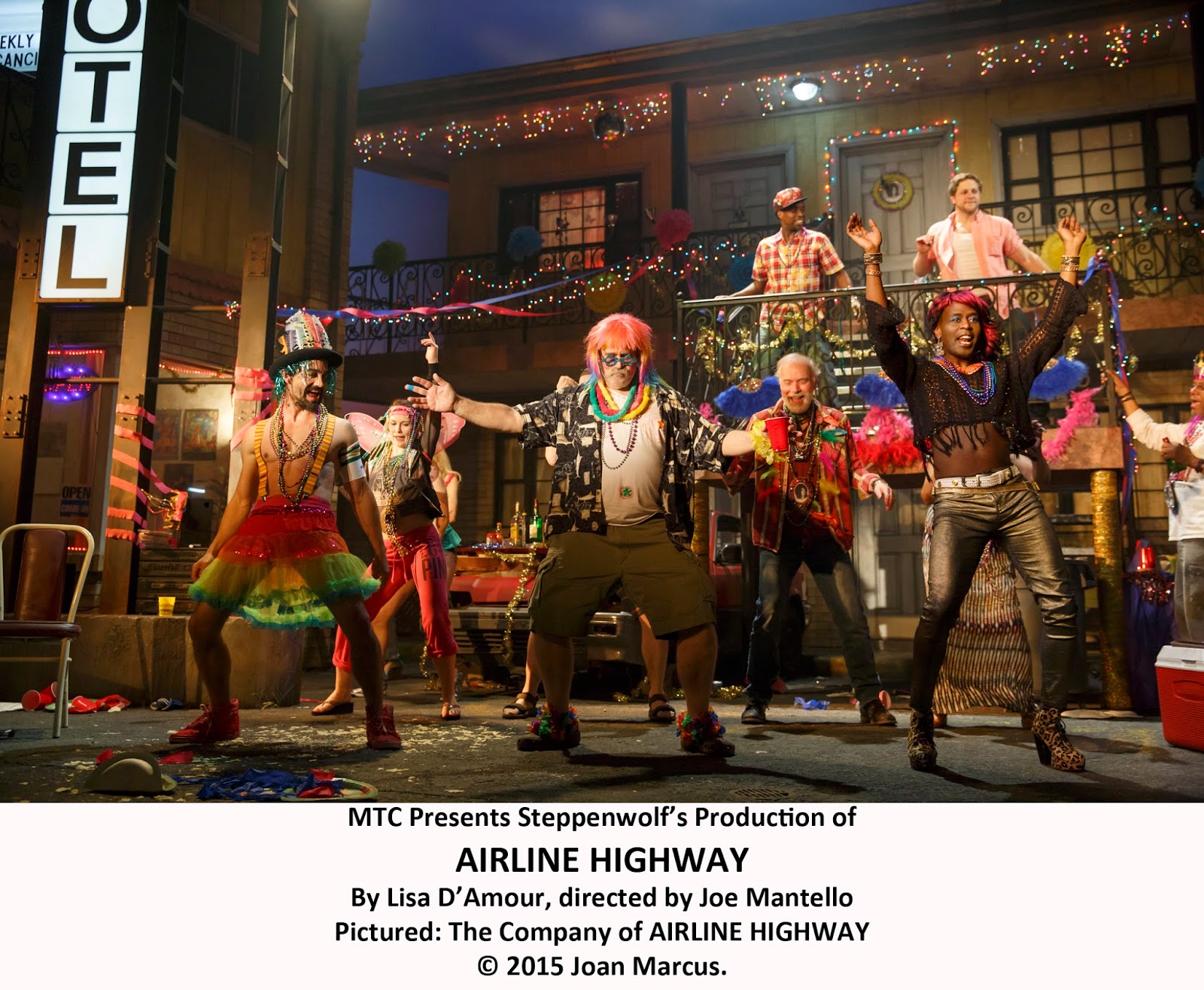