"The Fabric of a Life" 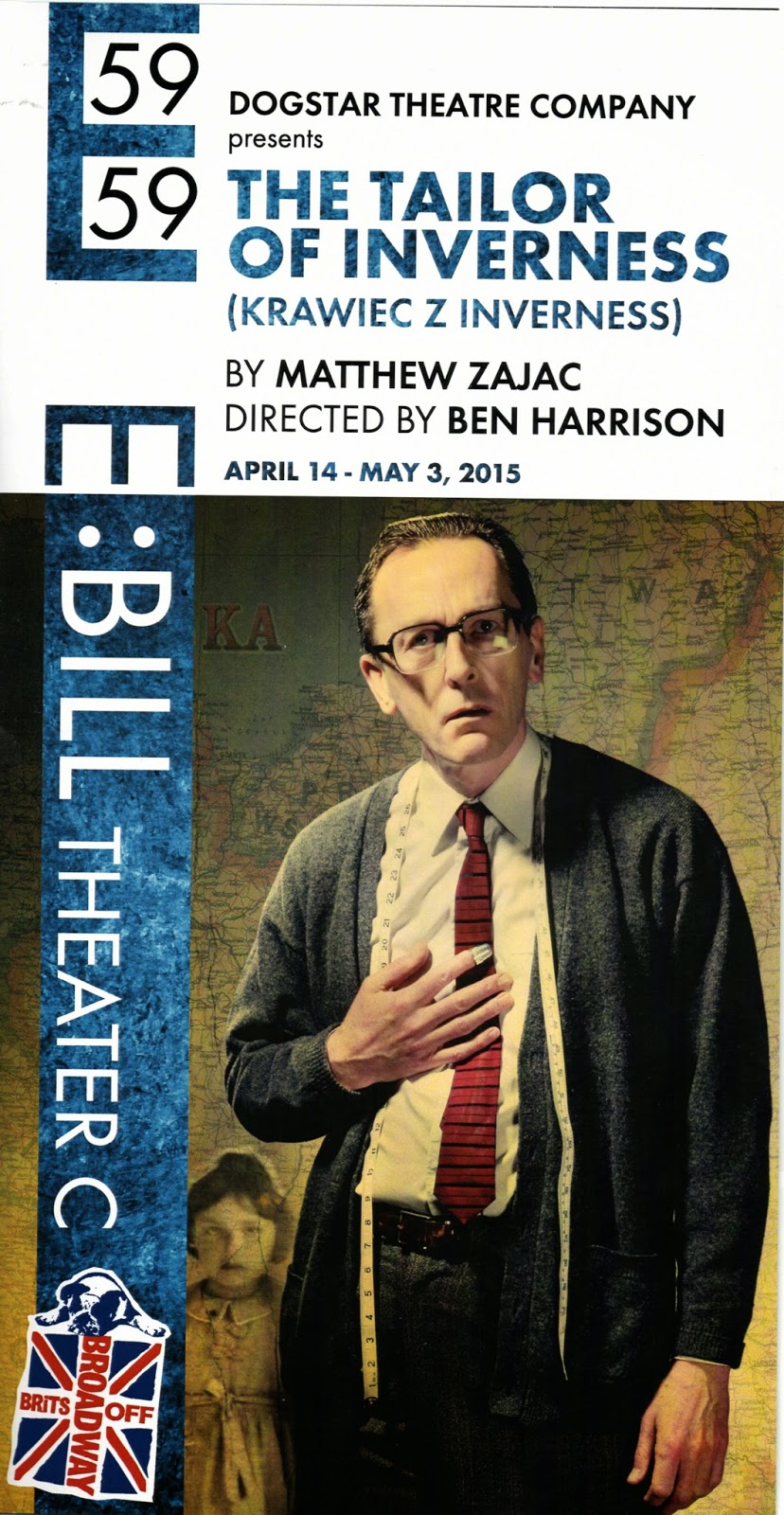 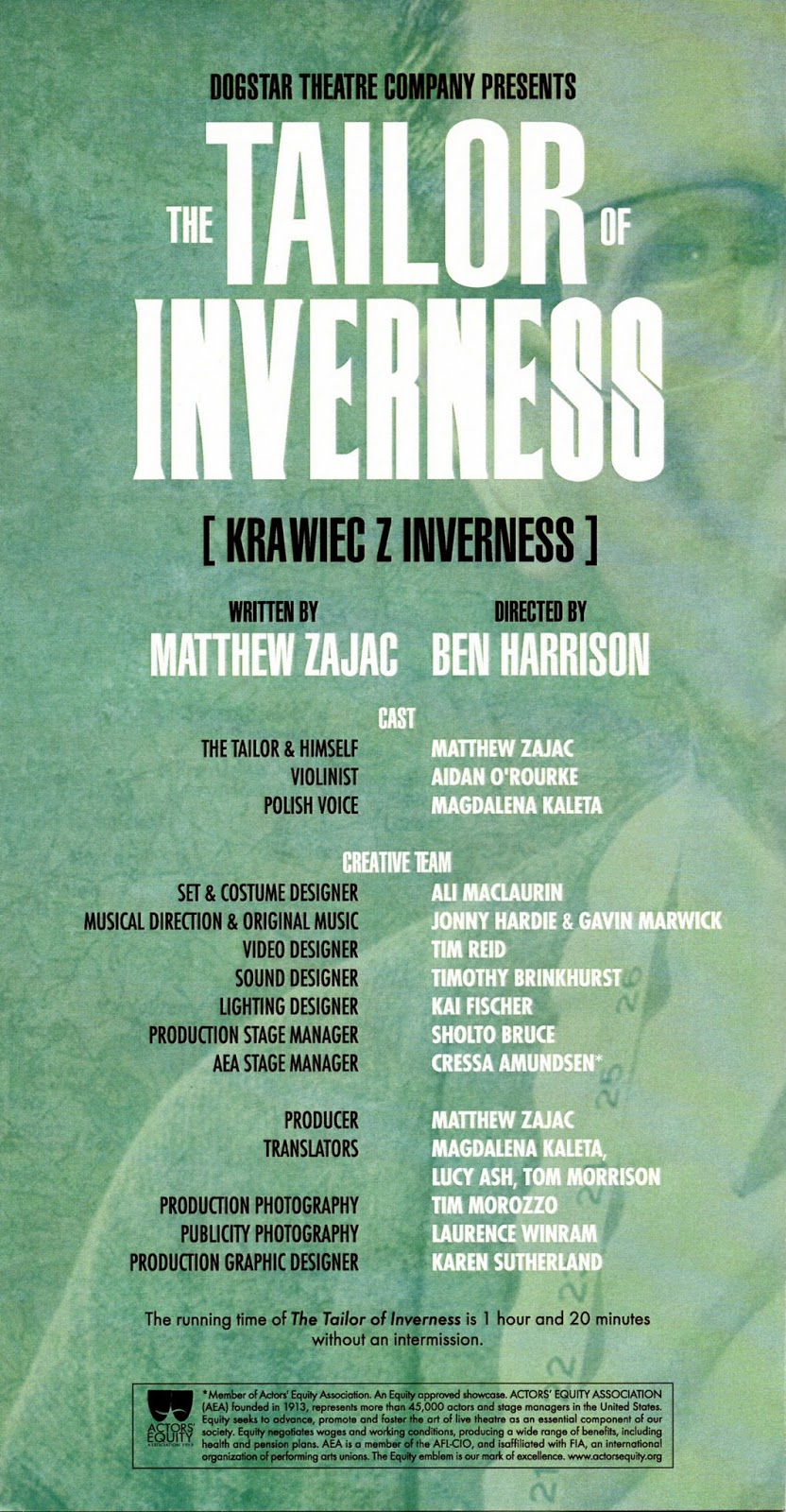 The Brits Off Broadway Festival at 59E59 Theaters begins with the potently effective THE TAILOR OF INVERNESS, Matthew Zajac’s solo play. It combines the autobiographical stream of consciousness ruminations of Mr. Zajac’s father, Mateusz, the tailor of the title, with the son’s straightforward narrative documentary exposition of his search for his family roots. Like so many persons displaced by the upheavals of war, whether it be one of the World Wars or any of those now roiling Africa, the Middle East, and elsewhere, Mr. Zajac’s father endured unbelievable hardship when forced to leave his homeland and loved ones, ending up somewhere totally unexpected, and leaving the mysteries of his experiences behind for his offspring to unravel.
The elder Zajac’s experiences, while personal, hold universal interest and he's fortunate to have in his son a writer and trained actor of sufficient talent to bring that story to vivid life. Matthew Zajac has been performing this material since 2008, under the able direction of Ben Harrison of Edinburgh’s Grid Iron Theatre, and has toured with it through Europe, including Poland and Ukraine; it also went to Australia. It won production and performance awards at the Edinburgh Fringe Festival in 2010. The play’s American premiere came in 2012, at the University of Massachusetts in Amherst. In 2013, Mr. Zajac published the story in book form.
Matthew Zajac, a trim middle-aged man dressed simply in white shirt, tie, and slacks, plays both his father (with eyeglasses) and himself (without); a violinist (Aidan O’Rourke) on a rolling stool in an upstage corner accompanies the entire performance (original music by Jonny Hardie and Gavin Marwick), some of which includes Polish songs that Zajac sings. The setting (by Ali Maclaurin, also credited as the costume designer) is a tailor’s table set with scissors, needles, and thread, and a blueish rear wall into which garments seem to have been compressed; a girl’s dress from the 1940s hangs on the wall as well. There’s also a tailor’s female dummy and a rolling, metal clothing rack with World War II military jackets hanging on it, as well as two white children’s shirts. The backdrop also serves as a screen for the projections of subtitles for Polish-language sequences and lyrics, as well as for maps, stills, and videos (video designs by Tim Reid).
Mateusz (Polish for Matthew) Zajac was born and raised in a melting-pot part of Poland called Galicia that the redrawn map of Europe later placed in the Ukraine. Speaking in a Polish-Scottish accent, he recounts his experiences (including romantic ones) after war broke out in 1939 and he joined the army; he was sent hither and yon through such far-flung places as Ukraine, Russia, Persia (as Iran was known), Iraq, Egypt, North Africa, and Italy. During the war he found himself forced to join one nation’s army after the other, including the Nazi army, and also endured forced labor on a Russian collective farm. He was a dehumanized cog, now here, now there, never told what was happening but expected to fulfill whatever obligations were put upon him, like the sequence of military jackets from different countries—including Germany—he dons one after the other at one point. (He brings to mind the title character in The Good Soldier Švejk, also spelled Schweik or Schwejk, Jaroslav Hašek’s famous antiwar novel.) Finally, he wound up in Glasgow, Scotland, after which, following numerous peregrinations in Scotland, he settled in Inverness and had a successful career as a tailor and raised a family.

Mr. Zajac tells his father’s story circuitously, inserting himself into it every now and then, introducing songs, and illustrating the route his father’s travels and travails took him through by the use of animated maps (too unfocused and crowded with data to follow very closely). Matthew, eventually anxious to fill in the gaps in his father’s story, decides to find out for himself as much as he can of what really happened, and he goes on his own journey into the past, obtaining official military records of his father’s activities, and even traveling to the Ukraine to meet surviving family members. What he learns reveals that what his father told him wasn’t entirely true, but that what actually did happen—including the tailor’s fathering of Matthew’s hitherto unknown half-sister—was actually more dramatic, if possible. The struggle to discover his father’s identity (and, by extension, his own) in a confusing landscape of mixed national, linguistic, cultural, and religious factors, is the same one so many diasporic wanderers continue to experience.

Mr. Zajac offers a quicksilver, physically adept performance of many colors and emotions; his rhythms constantly changing, along with his volume, he is continuously engaging. The staging has him go through many arduous activities, including doing pushups when commanded to do so by a nasty Wehrmacht officer. He handles clothing in a way that brings it to life, at one point making a garment in his hands seem to breathe. Much of his effectiveness can be attributed to the imaginative way director Harrison makes even the limited props at his disposal theatrical, like the clothing rack that Mr. Zajac wheels rapidly about in one scene, or the military jackets in which he dances. The tailor’s dummy also comes alive in lovely ways, as Mr. Zajac dances with it or drapes it with a pink scarf to represent several young women in turn.

This year is the 70th anniversary of the ending of World War II and, by extension, the Holocaust. THE TAILOR OF INVERNESS is, in its own way, a Holocaust story (like two recent plays recalling that horrific history, THE HAPPY END and JANKA). Jews made up 90% of the tailoring trade in Galicia and would have been responsible for training Mateusz; there’s even a moment when the tailor, a Roman Catholic, puts on one signifying armband after the other as he questions which best identifies him: Ukranian? Russian? Pole? He then picks up a cloth yellow Star of David, pondering it for a moment, almost as if to suggest that, in a way, he too is a Jew, before putting it down again.

THE TAILOR OF INVERNESS is packed with important historical information about the Galician experience of World War II. Sometimes this goes adrift amid the multiple threads woven together in the fabric of the tailor’s story, but soon enough you’re reengaged in the tailor’s remarkable tale. Perhaps your own family history has a story similarly worth telling.