The single greatest benefit to be derived from Clare Coss’s DR. DU BOIS AND MISS OVINGTON, now at the Castillo Theatre in a production by Woodie King’s New Federal Theatre with direction by Gabrielle L. Kurlander, is its introduction to a woman of major significance in America’s struggle for racial equality. To those knowledgeable about the country’s racial history and the suffragette movement, the name Mary White Ovington will perhaps be familiar (a Brooklyn public school, I.S. 30, is named for her), but, before seeing this play, I knew nothing about this interesting woman, and am grateful for the opportunity afforded to learn about her. 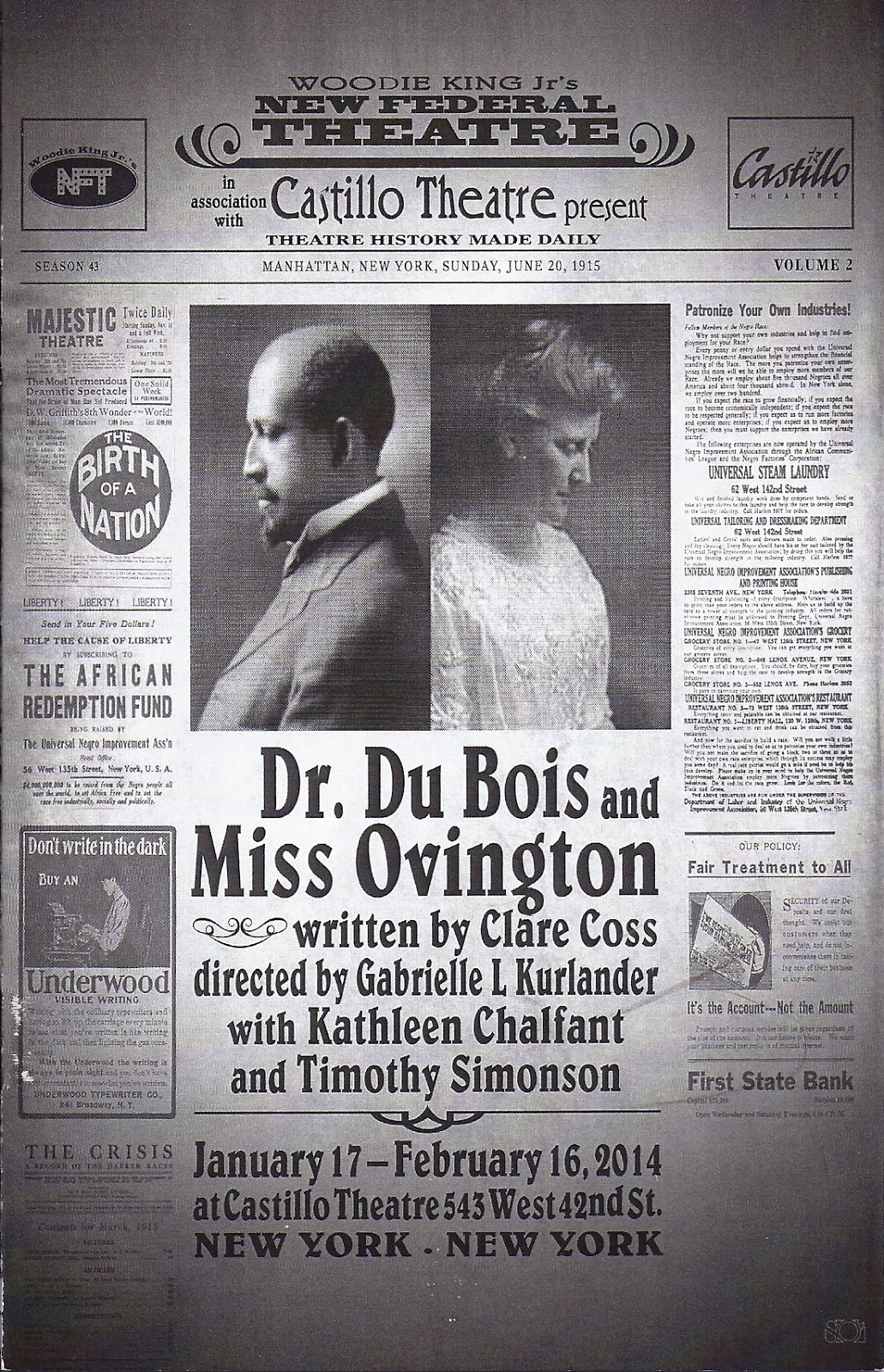 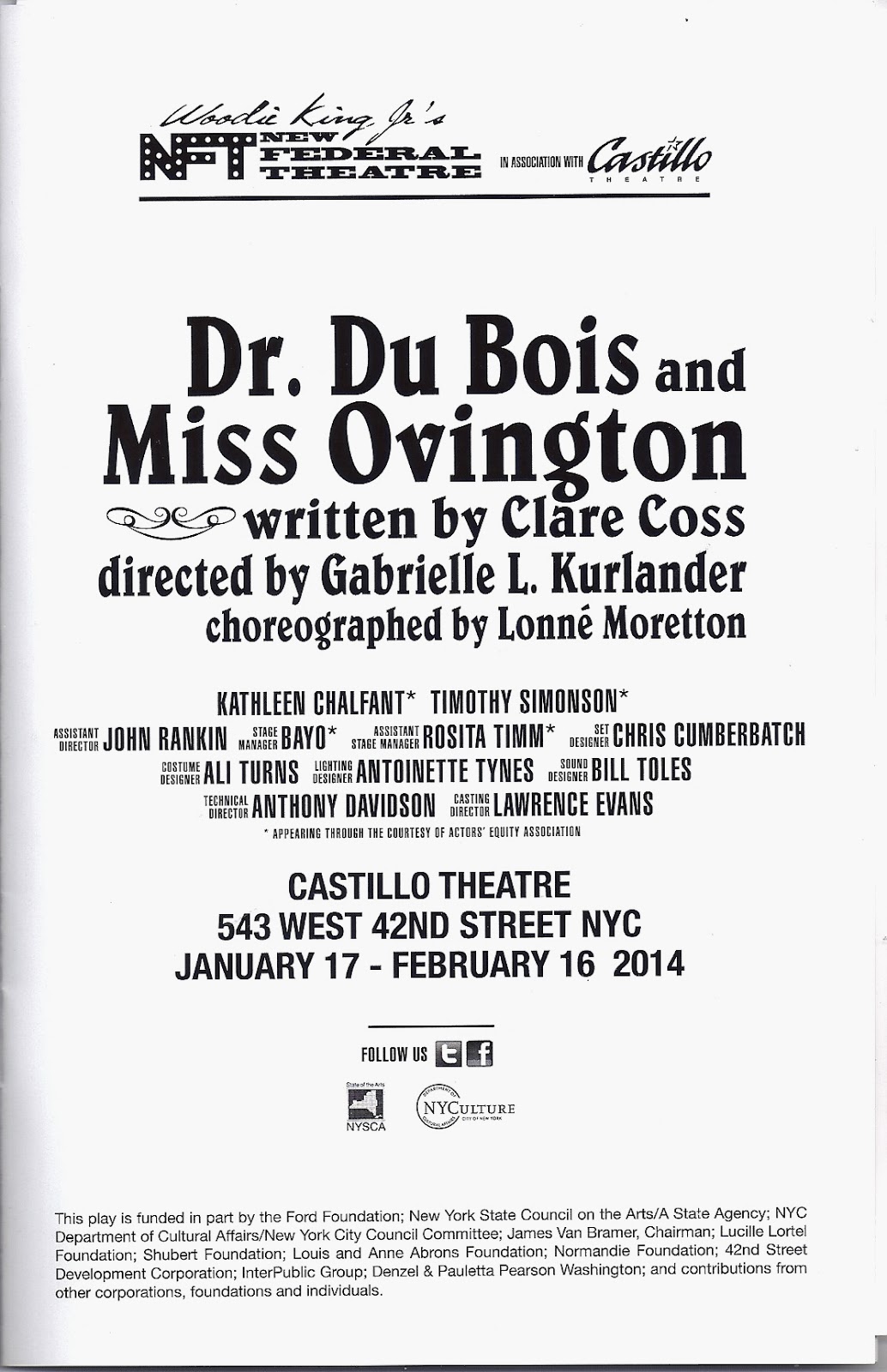 The play itself, set in 1915, is little more than an assortment of dramatically strained scenes between Miss Ovington, who was then 50, and the great black spokesman for racial equality, Dr. W.E.B. Du Bois, who would have been 52. Miss Ovington, a Brooklyn-born white woman who died in 1951 at 86, was one of the founders of the National Association for the Advancement of Colored People (NAACP), in 1909. A Unitarian, she was, as the program note points out, a socialist, feminist, pacifist, and suffragist; she also was a prolific author. Among her various causes was the plight of African-Americans at a time when the country was plagued by racial violence. In fact, President Woodrow Wilson had recently introduced segregation to Washington, D.C. A prominent part of the set is a wall map of the USA with markers noting the numerous lynchings of 1915 under the slogan, “Le Us Bear Witness.”


The awkwardly written play, filled with historical exposition that sounds like rhetoric plucked from history books, posits a meeting on a Sunday morning between Dr. Du Bois and Miss Ovington in the otherwise deserted offices of "The Crisis," which Du Bois edits. He's intent on resigning from the NAACP unless he can get full autonomy. She's determined to change his mind because of the importance of blacks and whites working together (the NAACP leadership was primarily white). The nearly plotless play ranges across their mutual and differing thoughts on the controversies of the day, including women’s issues, marriage, the movie BIRTH OF A NATION, America’s potential entry into World War I (they’re both pacifists), the notion of blacks joining the armed forces, miscegenation, and the lack of white financial support in resolving race relations. The play sputters momentarily to life when it hints at the possibility of a love affair between Du Bois and Ovington (he was married, she was single), but shies away from it when the pair think better of it (“I would not like to be known as a great man’s footnote,” she says), and finds a way for them to work together by the end.


Timothy Simonson as the temperamental Dr. Du Bois and Kathleen Chalfant as the spirited but rationalistic Miss Ovington struggle to bring conviction to their cardboard characters, each of whom is little more than a mouthpiece for historical facts and ideas. We learn barely anything of them as people, only their political positions being of interest in this didactic work in which Du Bois, the first black to get a Ph.D. from Harvard, comes off sounding like a pompous pedant. Mr. Simonson very slightly resembles Du Bois, but is much lighter skinned (he could pass for white) and much taller. His acting, however, suggests more the enthusiastic amateur than the polished professional, and his frequent stumbling over his words does little to change that impression. Ms. Chalfant, on the other hand, is a distinguished artist who works her bustle off trying to bring a semblance of human warmth to her textbook role. She draws on a full arsenal of actor’s tools but ultimately is defeated by the shallowness of her material.


Ms. Kurlander’s staging is stiff and awkward, failing to humanize what is essentially a piece of historical research expressed in clunky dialogue. She’s not helped much by Chris Cumberbatch’s cheesy set, showing two offices, one at the left, one at the right, separated by a piece of wall that is meant to symbolically demarcate one room from the other but looks instead as though the wall has been partially demolished. The actors are distractingly forced to go from the stage right room to the stage left one by passing through an up center door, walking unseen behind an upstage wall, and then reappearing at another door up left. A large window at stage right faces a flat with amateurishly painted office buildings across the street. The inadequate lighting, by Antoinette Tynes, does little to dispel the feeling that the actors need merely stick their hands out to open the windows on the other side of Fifth Avenue. Ali Turns’s  costumes, with Dr. Du Bois in a seersucker suit, and Miss Ovington in full skirt and white blouse, do an adequate job of representing the period.


DR. DU BOIS AND MISS OVINGTON, which runs an intermissionless 90 minutes or so, is a well-meaning work. However, apart from the professionalism brought to it by Miss Chalfant, it's dramatically insipid, failing to rise to anywhere near the level of its subject matter.
Posted by Samuel L. Leiter at 7:02 PM