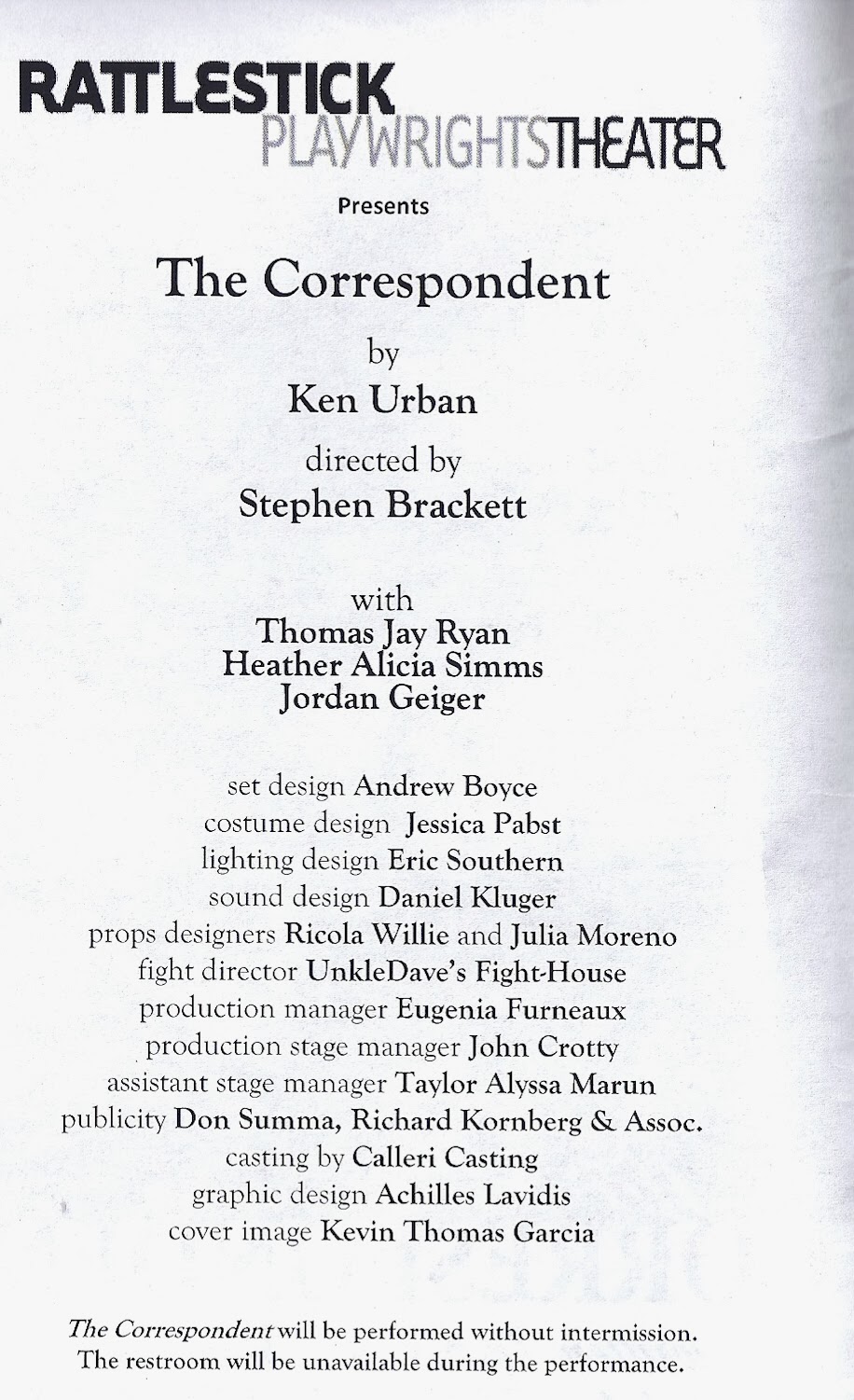 I truly don’t know what was more unbelievable on Monday night, the sight of the mink-coat swathed Joan Rivers slumming several rows in front of me at the funky Rattlestick Theatre on Waverly Place, or the plot of Ken Urban’s new play, THE CORRESPONDENT, a dolefully serious, but completely unconvincing drama about a man who believes his dead wife has come back to him in the form of a young, gay man. If I rated plays by snorts of disbelief, four being the highest, this would be a four-snorter for sure. I could, of course, count head shakes of the “Come on, what do you take me for, a moron?” category, but, in the present case, there would be too many and I’d have to start with at least 10 shakes as the standard to aim for. 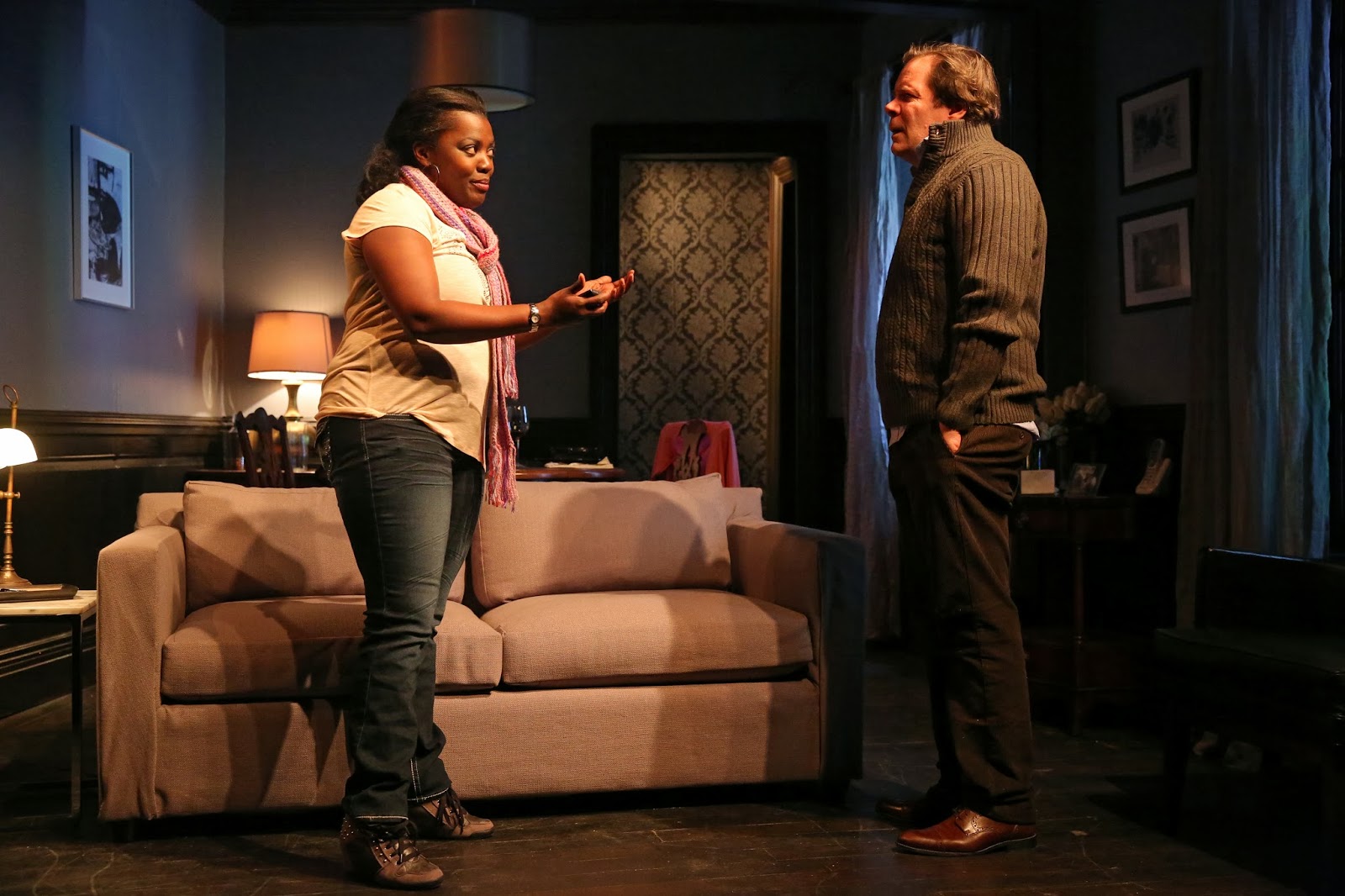 
What makes the 90-minute, intermissionless production mildly endurable, though, is that director Stephen Brackett has cleverly staged it in a mood of low-key, naturalistic suspense, with the characters speaking in the kind of quiet, restrained tones more typical of TV drama than most theatre, so it holds your interest long enough for you to want to see where it’s going. But fairly soon, the incredulities you’re asked to swallow grow larger and larger, until you aren’t able to get them down without a good snort or head shake, and the realistic acting and direction (aided by Eric Southern’s suitably atmospheric lighting and Daniel Kluger’s moody sound design) begin to seem almost parodistic. My theatre companion wondered afterward if the play might have benefited from a more stylized, heightened, or even farcical tone, but I was unable to see how any approach (or any actors) could have saved the play in its present form from its own inanity.
Phil Graves (Thomas Jay Ryan) is a successful Boston attorney living in a smartly appointed apartment (designed by Andrew Boyce) and grieving for his late wife of 25 years, Charlotte. She died when hit by a car after he and she, having quarreled, went out to a movie (“the cinema,” is how he calls it) as his way of patching things up. Phil, an average-looking, Catholic, white guy in early middle-age, has blamed himself ever since for her death and is so anxious to apologize that he finds a Web site specializing in supplying jerks like him with people who are nearing their own deaths and who will bring messages on their clients’ behalf to those in heaven. This arrangement, sought out by a man who’s the senior VP of a major legal firm (and who seems to have all the time in the world to pursue his fantasies), should get our plausibility detection meters ticking like Geiger counters at Fukushima, but we hold on because we’re still not sure of how well the dramatist will balance the potential blend of the natural and the supernatural..


The person who shows up from the Internet service is Mirabel (Heather Alicia Simms), a young, poor, black, overweight woman. I'd like to know why Mr. Urban gave her the name Mirabel, which is that of the romantic male lead in Wycherley's THE WAY OF THE WORLD; I see no traces of a comedy of manners in THE CORRESPONDENT. Is there an irony I'm missing? Anyway, Mirabel promises to pass his note along to Charlotte, saying he’ll know she’s received it when he gets an e-mail from her. (Say, what?) Things are getting a little tricky now in the believability department, and they only get trickier when, despite the white lawyer and black woman’s obvious differences of class, money, and education, they actually fall in love and have sex. Okay, now that that’s settled, and we’ve more or less accepted the weird relationship, things make a turn into even weirder territory when Phil begins getting handwritten letters from Charlotte, and enlists Mirabel to help find out who might be sending them. The letters provide enough information about Phil and Charlotte’s relationship to make the distraught Phil begin to think they might actually be from his late wife, so when the sender, who turns out to be a young man (Jordan Geiger), is actually caught by Mirabel, Phil allows himself to be convinced by the stranger that he is Charlotte, albeit in a shiny new persona.


Are you still with me? Let me repeat: a major attorney is naïve enough to believe that a skinny 20-something guy who bears absolutely no resemblance to his deceased wife, is indeed her, and accepts her back into his life, with absolutely no attempt to seriously investigate his bona fides. Even when the young man slips on a banana peel of personal information, Phil’s lawyerly instincts evaporate and he continues to accept the newcomer as his wife. This, of course, leads to jealous confrontations with the now discarded Mirabel, and, despite all his revulsions and protestations of heterosexuality, to a very frank male on male sex scene (full frontal warning!) between Phil and the presumed Charlotte.

For a non-gay guy to suddenly switch orientations and realize he's so hot for his wife after 25 years of marriage that he might as well do the nasty with a boobless partner, whose hairy nipple he sucks on greedily and who, into the bargain, has a penis, is a tribute to married love that will echo down the ages! The playwright clearly wants to say something about the ambiguity of sexual desire, but all he ends up doing is creating frissons of discomfort in the less ambiguously inclined members of his audience. In an e-mail, my friend suggested that "the playwright might actually have been attempting to show how the husband . . . was actually a closeted gay man who is fiercely holding on to the tiny shred of possibility--or the deception--that he and his wife were actually a happy, well-balanced couple" and needs the illusion of the wife impersonator in order come out. Perhaps, but even if so, he and I agree that "whatever the playwright was trying to do, it didn't work."


If the credibility slope hasn’t been slippery enough, there’s even more in store, both when we learn the cheesy explanation behind Charlotte’s reincarnation, and when the playwright, as if to show how much cleverness he still has waiting in his quiver, shoots one final arrow of theatrical surprise that, like all the others, wildly misses its target before the play comes to an end.


Plays and movies have long toyed with the idea of having loved ones return from the dead in some unexpected form, and audiences are always suckers for the sentimental outcomes of such encounters, especially when well handled. For example, in Walter Hasenclever’s BEYOND, a German play seen in New York in 1925, a dead husband’s spirit inhabits the body of his friend, and the wife finds herself bound to him.  More recently, there was the 2000 movie RETURN TO ME, with Minnie Driver and David Duchovny, in which the heart transplant from a man’s dying wife leads to a love transplant with the woman who received it. Let me know if you can think of others in this vein. In THE CORRESPONDENT, the klutzily handled reincarnation theme is (spoiler alert!) explained rationally, but as the play ends, the playwright tries to have it both ways. Either way, this correspondent ain’t buying it, nor, I strongly suspect, would you.