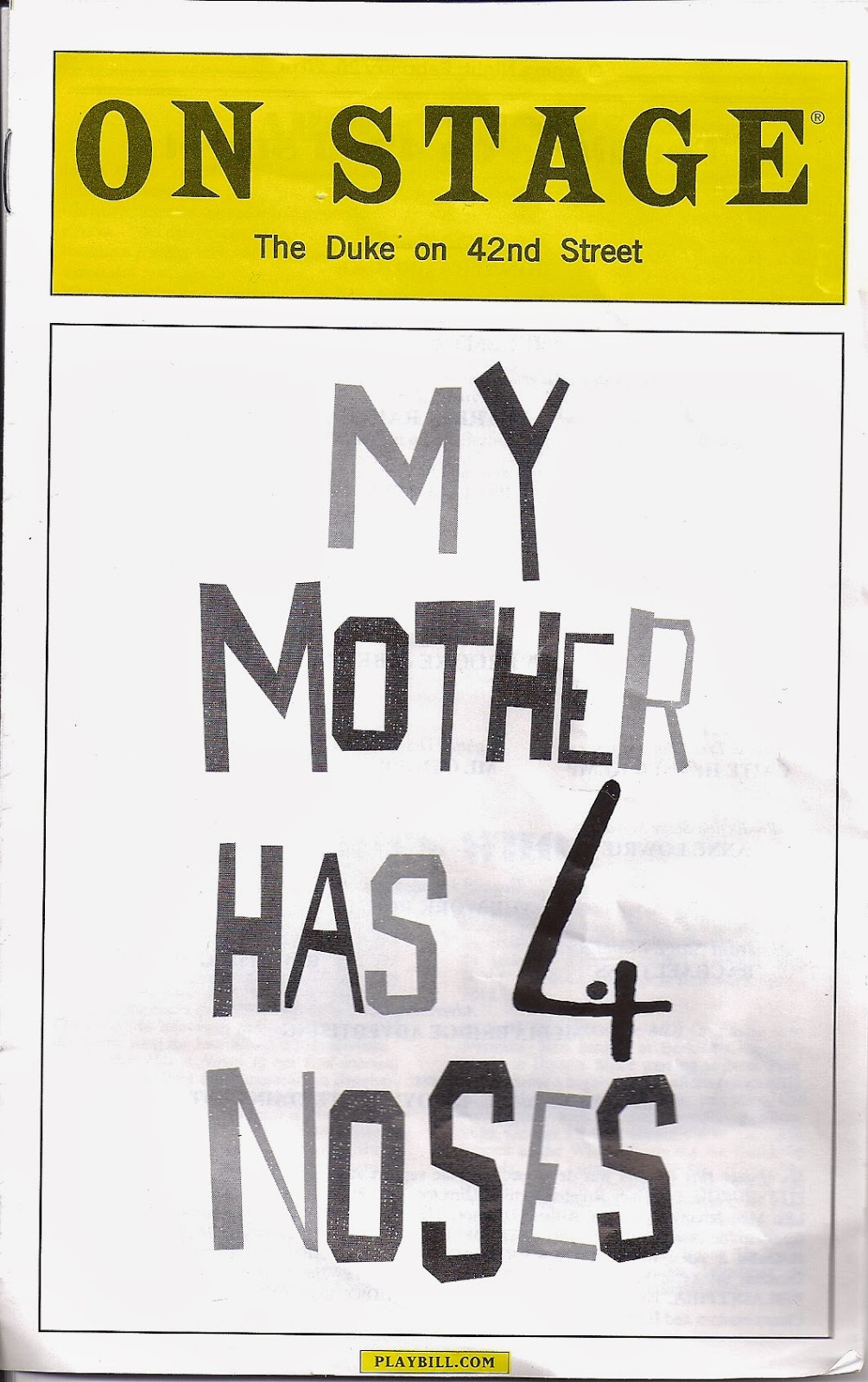 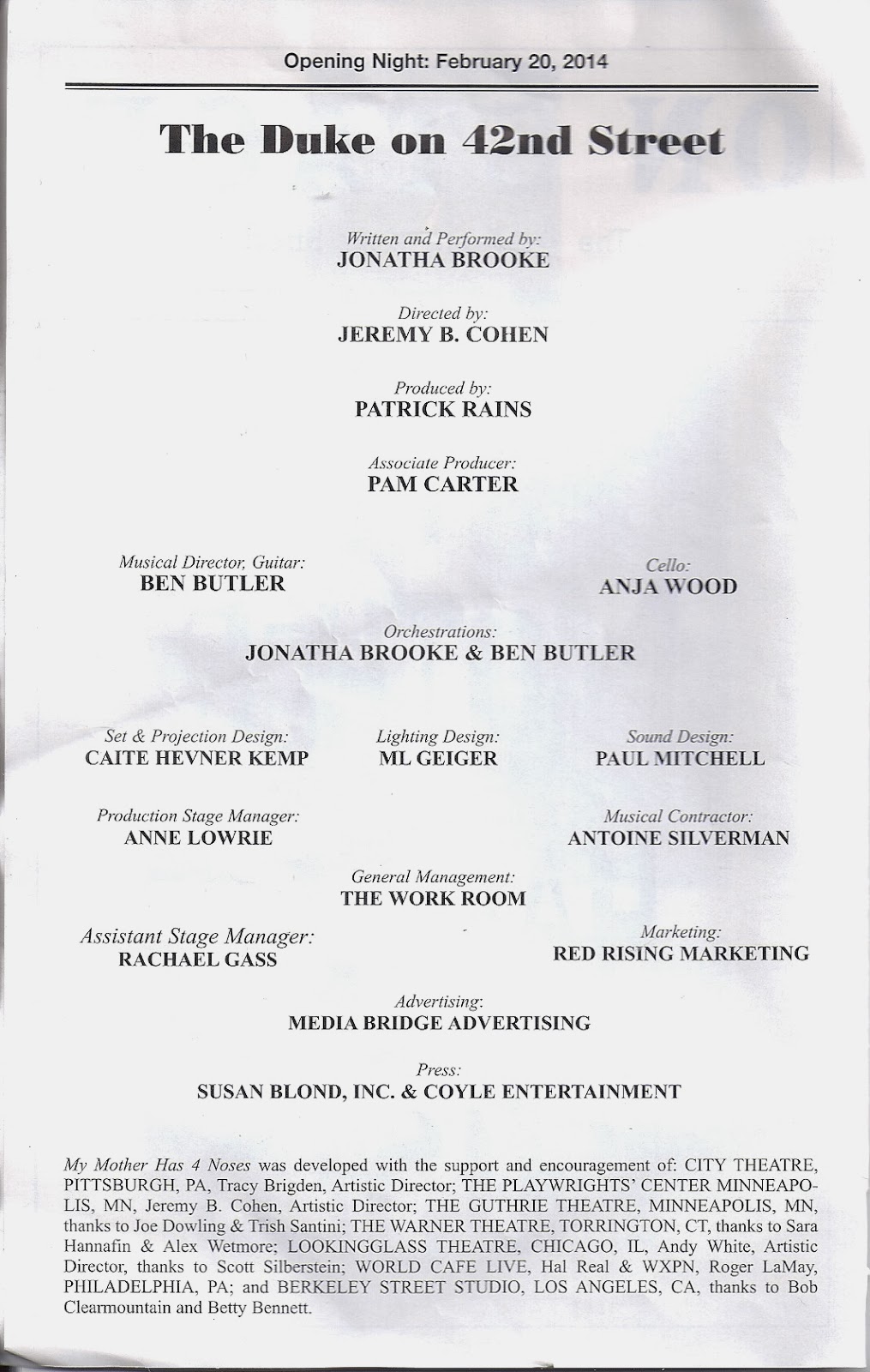 Many of us will face the problem of dealing with an aging loved one in the last stages of their lives when they’re suffering from physical or mental disabilities. As the ailing person drifts further away, the demands on their caregivers magnify, causing tremendous anguish and stress. Lately, there’s been an increasing tendency to dramatize such situations, as in the movie AMOUR, about an elderly husband watching his wife drift away, in last season’s play with music, THE MEMORY SHOW, about a daughter’s dealing with her mother’s Alzheimer’s, and in this season’s TOO MUCH, TOO MUCH, TOO MANY. Such works are typically poignant and sensitive in their treatment of the issues, and may even have a dollop of humor to lighten the load. Jonatha Brooke’s MY MOTHER HAS 4 NOSES, about the writer-performer’s mother’s decline into dementia is in this vein, albeit with a surprisingly positive tone about what she went through before her mother died. 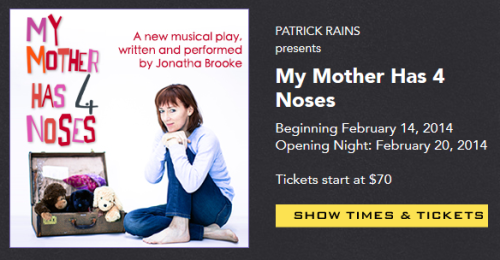 Ms. Brooke is a well-known folk singer-composer who performs her own compositions, and has produced a number of CDs, including one that captures her performance in this one-woman show. She’s an attractive, middle-aged redhead in early middle age, with a super-sleek figure set off by skintight jeans, long boots, wide rhinestone belt, and a formfitting top; watching her graceful gestures one can easily imagine her as a professional dancer. She tells the story of her beloved mother, a poet named Darren Stone, whose facial cancer eventually caused such deterioration of her features that she was forced to make alternate use of four realistic prosthetic noses; these are seen in projections (by Caite Hevner Kemp), both in their natural state, lying next to one another, and on Ms. Stone’s ravaged face (from which they had a tendency to fall off). In the play, Ms. Brooke describes her mother’s condition as that of dementia, but she has also published a blog of her experience caring for her mother in which she attributes Ms. Stone’s disease to Alzheimer’s (http://www.pbs.org/independentlens/blog/alzheimers-stories-waltz-with-my-mother-by-jonatha-brooke). Regardless, Ms. Brooke’s project, being shown at the Duke Theatre, with direction by Jeremy B. Cohen, aims to let us in on the two years she, with the aid of her sister, cared for her mother before she passed away.


As she speaks, introducing her mother’s life, kooky personality (she often performed as a clown), and various illnesses and  institutional experiences o us, a wide range of personal photos (and information titles) are projected on a large screen; the only actual scenic locale is a nook consisting of a bookcase, a table, and chair at stage left. A cellist and keyboardist sit up right; a piano down right allows Ms. Brooke to accompany herself on a number of songs (when she isn’t doing so on her guitar). There are 10 songs, five in each act, making it as much a musical as a play. The songs are not narrative heavy but rather reflections of Ms. Brooke’s emotional states at different points in her tale.  They do reflect the play’s narrative, of course, as in “Are You Getting This Down,” inspired by Ms. Stone’s frequent asking of that question when, aware of the silliness of some of her own experiences or conversations, she wanted to confirm that her daughter was writing it down for posterity.


The principal element that makes the narrative different from those of a similar nature is Ms. Stone’s having been a Christian Scientist. Christian Science believes that God’s love will cure mortal ailments: “you’re supposed to meet every human need with prayer,” we’re told. The disconnect between Ms. Stone’s faith and the reality of her ailments is fodder for her deeply skeptical daughter’s narrative. Apart from this, and several of the musical numbers, which Ms. Brooke sings in a rich, sharp-edged voice, there’s little that’s very original here. We learn about the problems of putting a parent in a nursing home (where “they tie people to their beds”) and of the advice to care for them at home, if at all possible. This, of course, requires superhuman patience and love. Not enough of it the story is amusing enough to raise more than an occasional chuckle, and the emotional payoff did not, for me at least, warrant the distribution to the audience during the intermission of tissues to keep damp eyes dry.


Ms. Brooke is engaging and, despite her ultimately depressing story, she continues to convey a girlish, optimistic attitude, no matter how dire the things she’s describing (and they are dire). But, even her attempts at scatological humor, as when she describes the “poop management” efforts she and her sister (a team she dubs “poop midwives”) were forced to perform on their mother’s behalf, fail to do more than elicit an understanding smile. How funny is it to learn that Ms. Brooke’s mother thought she would save money on her plumbing by flushing as little as possible?  Or to listen to talk about the size of her mom’s BMs?


I rate Ms. Brooke’s performance and her music highly, and admire her devotion to her mother in the last two years of her life. However, as someone who watched a close relative endure the last stages of a terminal disease in his own home, I need more than MY MOTHER HAS 4 NOSES supplies to help me find the humor in such an experience.