224. TIL DIVORCE DO US PART: THE MUSICAL 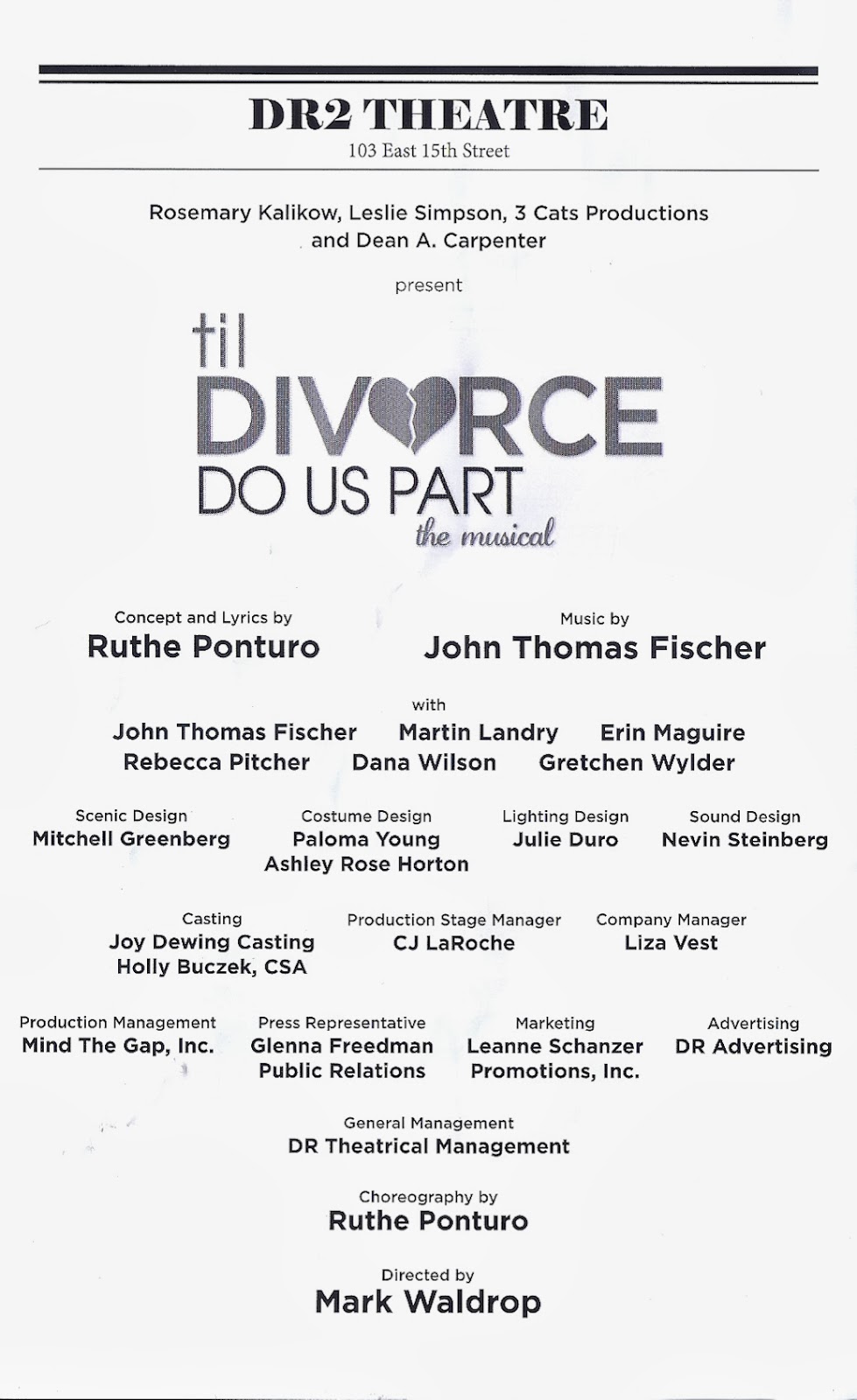 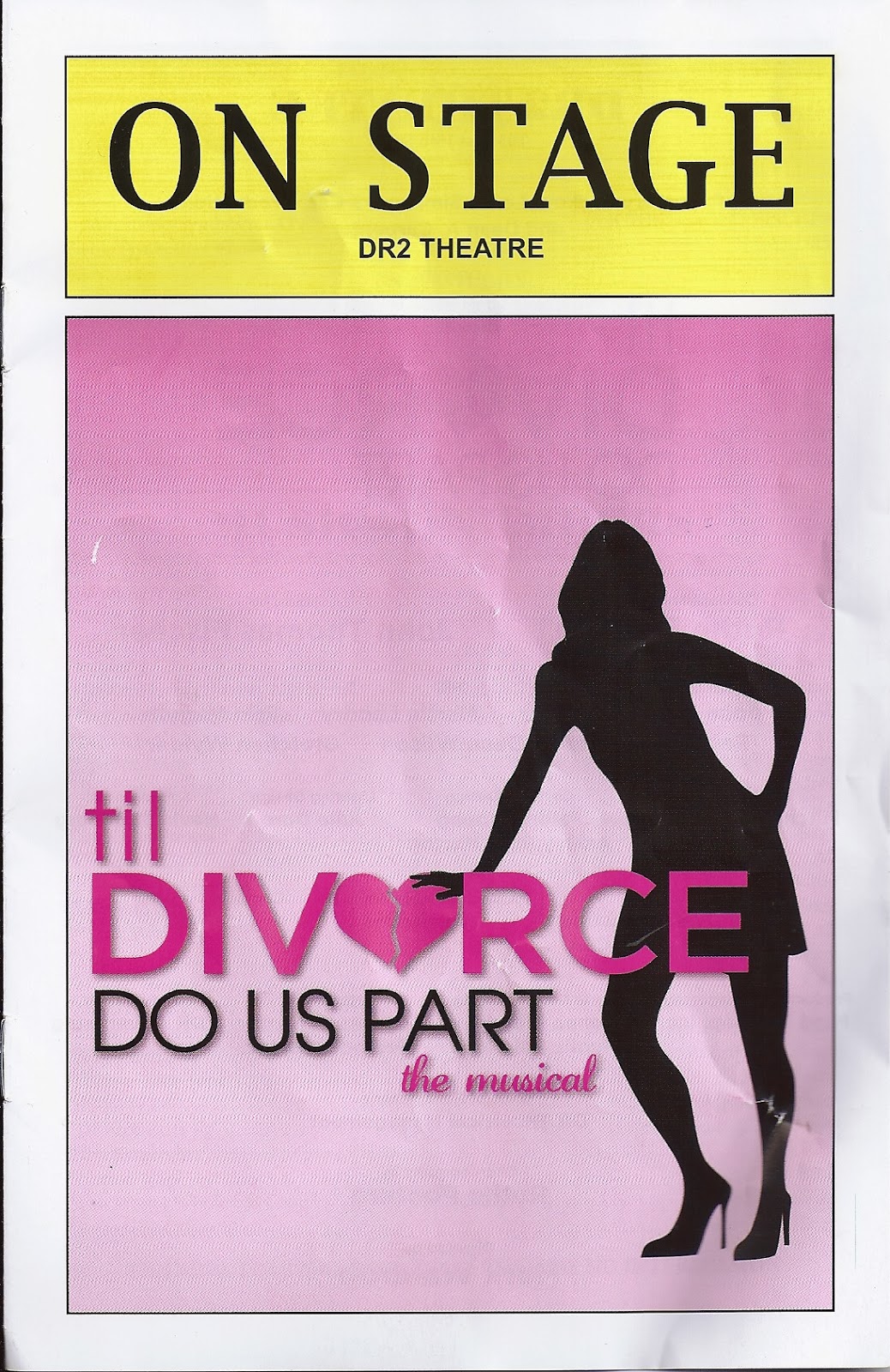 Ruthe Ponturo, who conceived this show, wrote its lyrics, and created its choreography, makes no bones in her program bio about the fact that it was inspired by her own divorce from a man who “decided he no longer wished to be married.” (Her husband was a Broadway producer whose eyes wandered to a younger woman.) “She hopes that this production helps women, divorced or not, to feel confident and positive.” The result, TIL DIVORCE DO US PART: THE MUSICAL, at the DR2 Theatre near Union Square, is more a revue than a musical (no book writer is credited), and presents around two dozen songs riffing on themes of divorce in a variety of pop musical styles.


The cast is composed of three attractive women, the lead being Kate, played by a flametressed beanpole named Erin Maguire; her friends are a brunette named Audrey (Gretchen Wylder) and a blonde named Suzy (Dana Wilson), but we learn nothing about them as characters (and little enough about Kate). They frequently change costumes (designed by Paloma Young and Ashley Rose Horton) fully or partially to sing songs with titles like “Wedding Vows,” “Denial” (done with a Cleopatra motif and an accent on “the Nile”), “Best Friend Rag,” “If Only You Were Gay,” and so on, in styles ranging from 50s rock ‘n roll to Latin to Andrews Sisters boogie woogie to straw hat and cane vaudeville to rap. 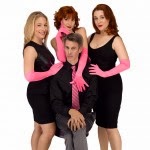 From left: Dana Wilson, Erin Maguire, Gretchen Wylder; center, John Thomas Fisher. Photo: SPA Digital Images, Ltd.
What book there is is largely spoken by a fourth character, a gay man who gives divorce advice under the name “Dottie,” often while wearing a black and white-striped woman’s hat with a large butterfly bow. He’s played by John Thomas Fischer, who's also the show’s composer, and who mainly performs from behind a keyboard upstage right. Once again we have a gay man giving straight women tips on how to conduct their love lives (see SEX TIPS FOR STRAIGHT WOMEN FROM A GAY MAN, below).


There’s no story to speak of, just one divorce-themed song after the other, most of them staged with unexceptionable choreography. Most have a comic or satirical tone and nothing touches on the maudlin. Some of the material is mildly raunchy, but everything is so blandly pleasant no offense can be taken. Mitchell Greenberg’s colorful set, brightly lit by Julie Duro, uses a false proscenium onto which are affixed oversized, heart-shaped candy lozenges with innocuous words and phrases on them like “Really?” and with several Cupids pointing their arrows downward toward the stage. The performers are all game but none is exceptional, and, as my guest remarked, their harmonies are sometimes off the mark. Mr. Fischer’s tunes are suitably tuneful but so derivative that they pass through your system as quickly as you hear them. The best thing I can about his singing is that he should stick to songwriting.


TIL DIVORCE DO US PART is passable entertainment, suitable for dinner theatres and the like. I can’t say whether women who’ve gone through or are undergoing a divorce will feel more confident and positive about themselves because they sat through 90 minutes of mildly tacky songs and dances on the subject, but if it helps at all to lift their spirits more power to the show (and them).
Posted by Samuel L. Leiter at 7:55 PM