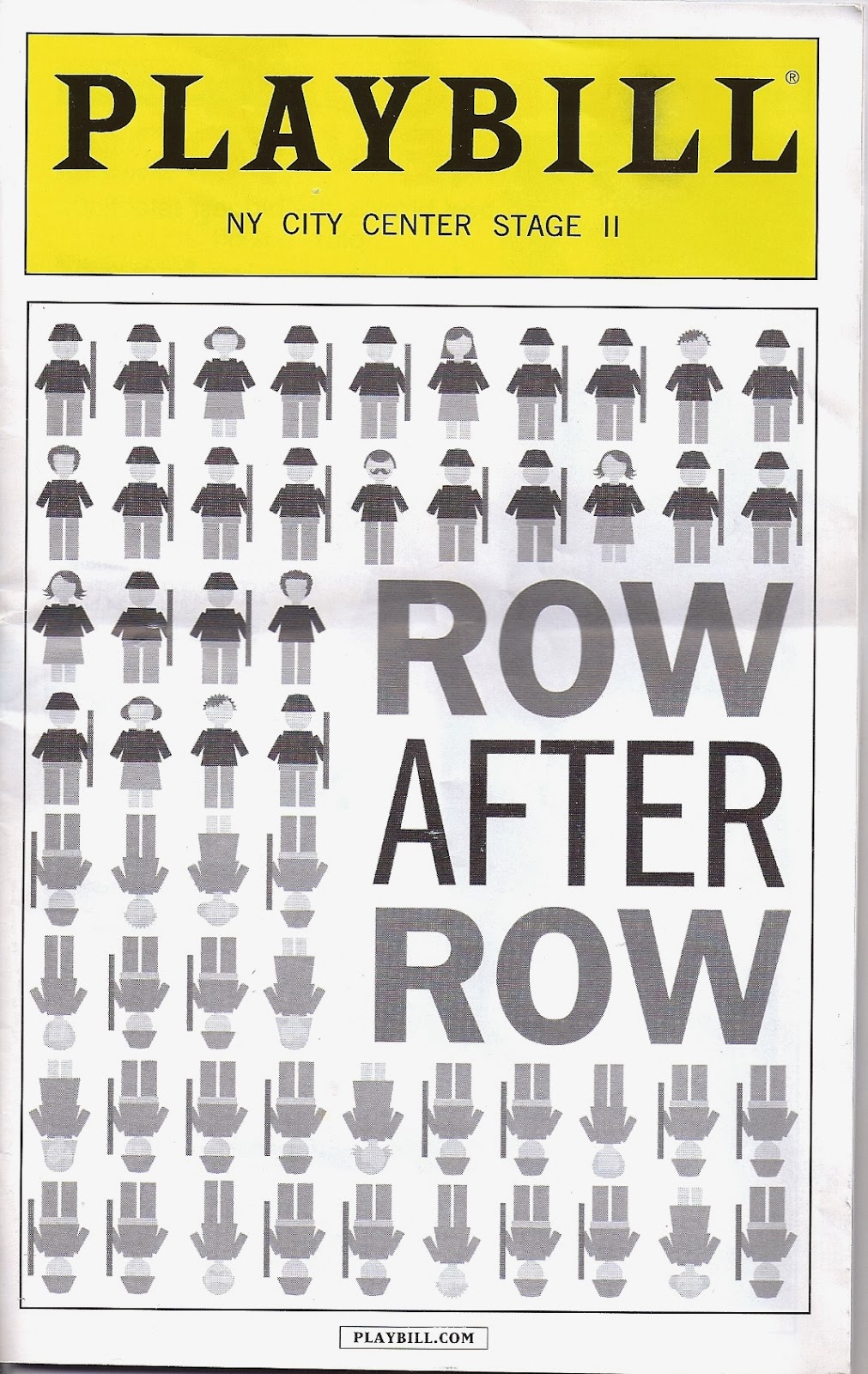 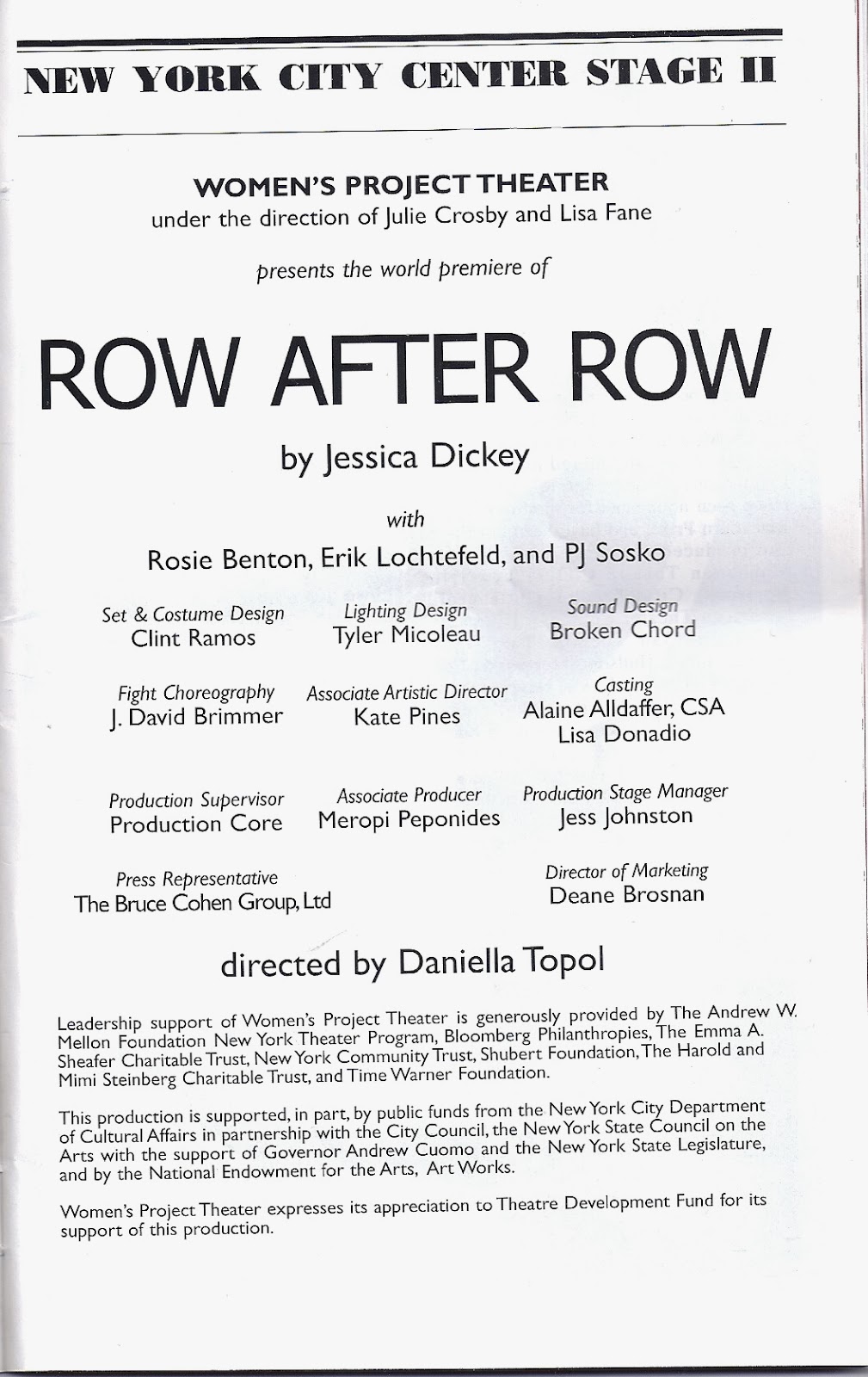 In Jessica Dickey’s new play, ROW AFTER ROW, now playing under the aegis of the Women’s Project Theater at City Center Stage II, much is made about the practice of “farbing.” Cal (PJ Sosko), a zealous Civil War re-enactor in Gettysburg, Pennsylvania, explains that the term, whose etymology is vague (unless it comes from “Far better for me to tell you”), is zinged at those re-enactors who introduce inauthentic elements into their uniforms, weapons, or accoutrements. Cal is vociferously dedicated to authenticity, down to the thread count in the clothes participants wear, yet, late in the play, after a day of re-enacting the battle of Gettysburg, he sits on the floor of a local tavern with the squeaky clean soles and heels of his boots staring the audience in the face. “Farbing!” one is tempted to shout, but then again, the word could be hurled at some of the lumpy play itself. 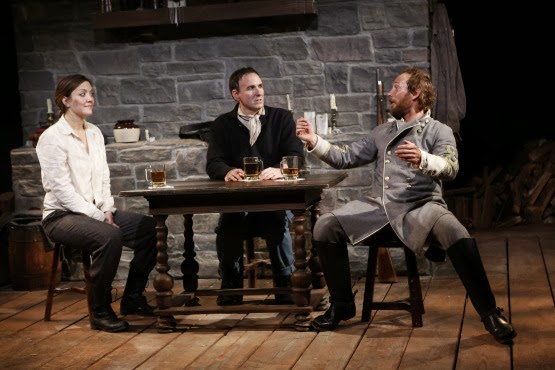 
Ms. Dickey, a resident of Gettysburg, has tackled the interesting problem of creating characters who devote themselves annually to the recreation of historical battles, in this case the horrific combat at the Battle of Gettysburg. She posits a pair of long time buddies, Cal, a macho man who recently endured a painful breakup, and Tom (Erik Lochtefeld), a local rabbi’s son and high school history teacher with a wife a child, who engage in this yearly exercise because of their Civil War obsession. Tom, who suffers from indecision in his daily life (he can’t decide whether to sign a petition to go on strike or not), plays a Union deserter, while the more direct Cal takes pride in his role as a Confederate general. When the men, friends since childhood, encounter a third re-enactor, Leah (Rosie Benton), a former dancer making her first stab at re-enactment, at the tavern where they traditionally have their post-battle celebration, they engage with her in dialogue ranging from contentious to friendly to flirtatious. After all, the presence of a woman in Civil War military uniform suggests a form of farbing, albeit one that does have some historical support. Naturally, this allows the feisty Leah, nobody’s fool, to  introduce feminist issues into the dialogue, and the play sometimes takes on the tone of a polemic.  Some dramatic sparks fly, but most are about as harmless as those from a 4th of July sparkler, and the play too often fizzles instead of sizzles.


Intermittently entertaining and informative, Daniella Topol's lively staging of ROW AFTER ROW establishes a potentially interesting world, but, despite strong efforts by the actors, the characters are overwrought, especially the men, and there is very little dramatic thrust to the plot. The potentially romantic outcome of the men’s interaction with this woman in the world of male empowerment is predictable and not especially engaging. Mr. Sosko offers a decent portrayal of Cal but I never quite believed his combination of machismo and vulnerability. Mr. Lochtefeld occasionally overdoes Tom’s anguish, and, acting-wise, only Ms. Benton’s Leah manages to skirt the farbing problem.


Clint Ramos’s set suggests a quaint tavern in the 19th-century mode with merely a piece of brick wall, wooden flooring, and a table with three chairs. Lining the upstage wall is about half a cord of firewood, and split logs and shavings are scattered around the downstage perimeter in a separate space suggesting the outdoor environment of the battleground. This area is often used for Ms. Dickey’s attempt to elevate the romantic comedy aspects of her play onto a plane of more serious historical issues by having the action suddenly shift a number of times from the contemporary bantering and bickering among the characters into scenes that echo actual historical situations. Often, the everyday colloquial dialogue shifts, along with the lights (effectively designed by Tyler Micoleau), into a more poetic vein, and lyrical monologues are presented. Too little of this playwriting palaver seems organic, and too much of it like dramaturgic farbing.


After a week in a sickbed, I was anxious to get back to the theatre for something to lift my heart and spirit. ROW AFTER ROW didn’t do the job but there’s play after play in the week ahead.


P.S. I came down with some kind of bug last week after seeing TYSON VS. ALI staged by Reid Farrington, from a script by Frank Boudreaux, at 3-Legged Dog at 80 Mercer Street in the Financial District, which I was too weak to review. This hour-long, imaginative piece of theatre is set in a boxing ring (designed by Simon Harding), with the audience on two sides; it uses a tremendous amount of visual technology (the raison d’être of 3LD), and employs four supremely athletic actors playing Muhammad Ali and Mike Tyson (and other fighters) to examine who, of these two former champions, might have been the victor had they ever fought. Structured like a boxing match, with spoken interpolations by the principals between the rounds, it has some very good boxing sequences, and intriguing boxing choreography by Laura K. Nichol; it’s very ambitious and experimental, done with terrific professionalism, but, for all its theatrical inventiveness, is dramatically inert.
Posted by Samuel L. Leiter at 7:28 AM