Oy. The arctic cold, the never-ending snow storms, my aching hip, the succession of mostly mediocre shows I’ve had to sit through lately. At least on Tuesday I was heading for the comforts of an evening of comic make believe in the usually uproarious company of Charles Busch and Julie Halston in Mr. Busch’s new play, THE TRIBUTE ARTIST, produced by Primary Stages at 59E59. Two hours and 15 minutes (including an intermission) after the show began, I had yet another oy to add to my list of woes. 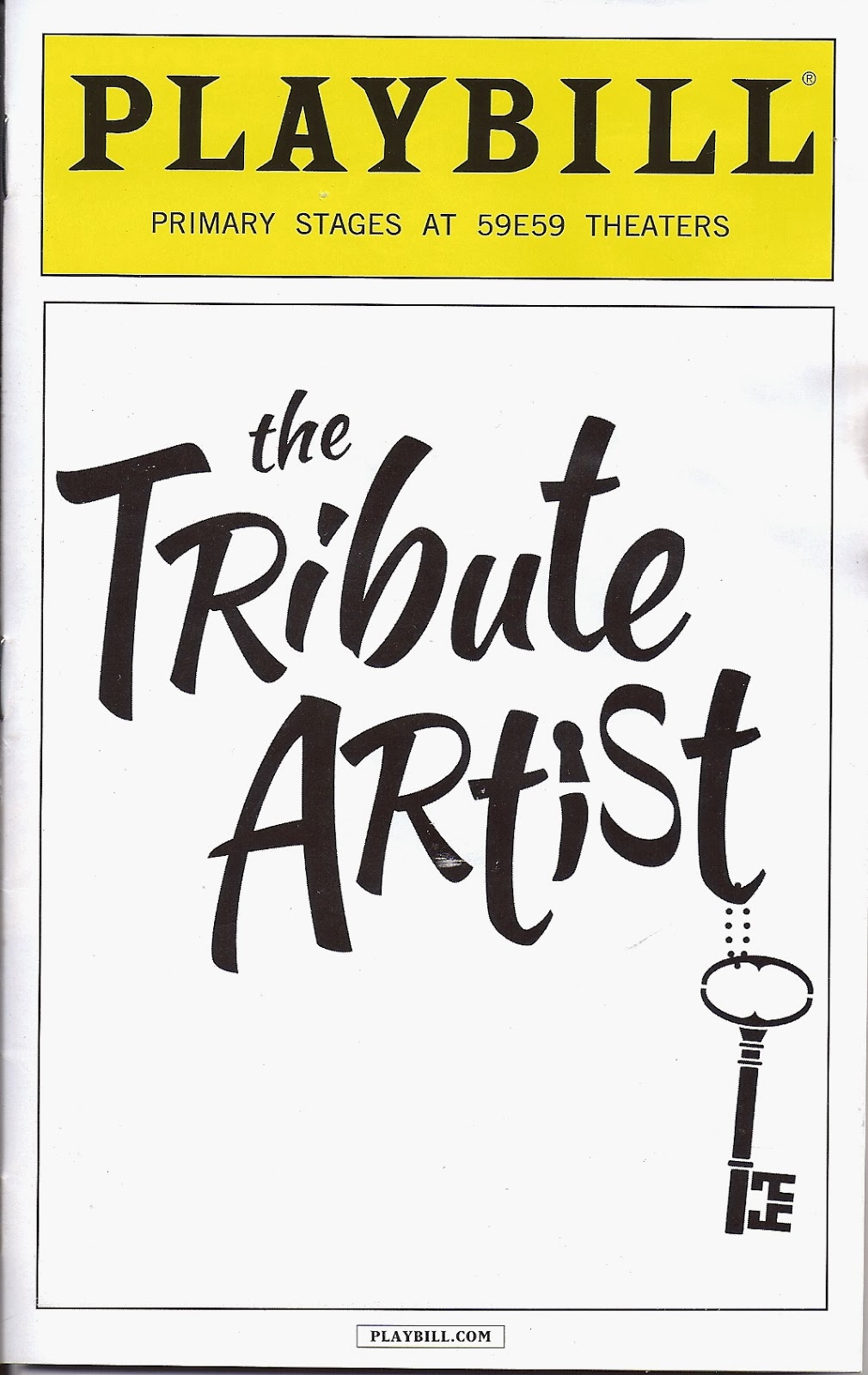 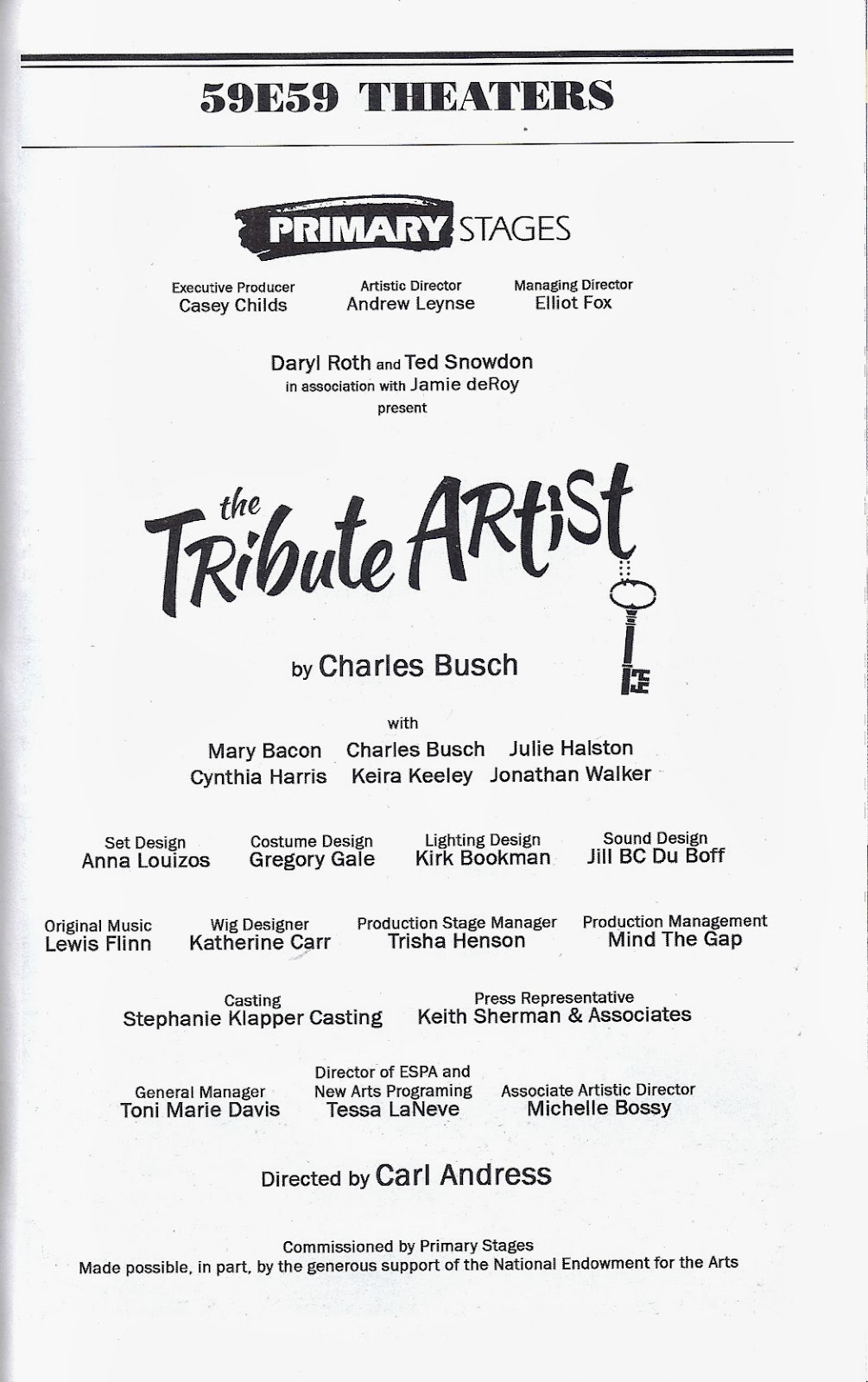 I suppose one could write an essay on the play’s preoccupation with the transmutability of identity but, even if THE TRIBUTE ARTIST, energetically directed by Carl Andress, were a work of intellectual comedic genius, which it’s not, that wouldn’t make it seem any the less something that, both in its script and high-pitched performances, made me feel I was visiting the kind of comedy that used to tour summer stock theatres or end up on dinner theatre bills after it had worn out its welcome on Broadway. The characters are cartoons, the set (by Anna Louizos) is eye-catching, the costumes (by Gregory Dale) are colorful, the acting is broad and brassy, the jokes are sassy zingers with a heavy dose of (often gay) naughtiness, and the plot is contrived enough to give its star and author all the opportunities he wishes to flame around doing impersonations of female show biz icons. Nevertheless, despite the comic stardust that normally trails Mr. Busch (and Ms. Halston), their enthusiastic efforts here are wasted on a tired farce that sets up a silly premise and fails to make it real enough or its stakes high enough to grab our attention lapels and never let us go. 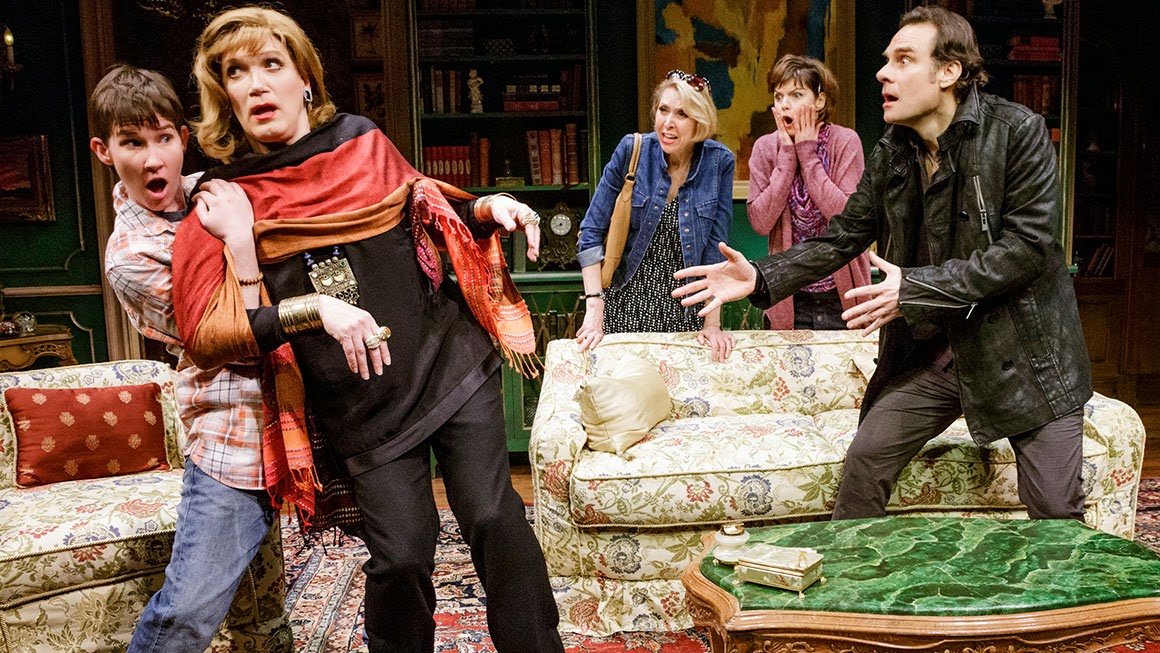 Mr. Busch plays Jimmy, a Las Vegas “tribute artist” (he rejects the term “drag queen), who has been fired from his gig (younger audiences weaned on Rihanna and Beyoncé aren’t interested in his silver screen goddesses), locked out of his apartment by his boyfriend, and forced to move back to New York where he rents a room in the luxurious Greenwich Village townhouse of a glamorously eccentric, aging fashion designer, Adriana. She’s played by Cynthia Harris with a deep voice, extravagant manners, and high-toned accent that bring to mind the fancy movie stars, like Tallulah, Hepburn, Crawford, and Davis, of whom Jimmy has made a career impersonating. After some lengthy exposition that tells us that Adriana expects to die soon, that her house is worth $12 million, that all her personal information is in a notebook, and that she has no doctor, lawyer, or personal banker, she pops off quietly and Jimmy and his best friend, the lesbian real estate broker Rita (Ms. Halston), quickly decide on a scheme to pass the body off as somebody else and for Jimmy to assume her personality, sell the house, and split the proceeds with Rita.


The perfect crime soon reveals its imperfections when Adriana’s whiningly complaining niece Christina (Mary Bacon) and her transgender daughter/son Rachel a.k.a. Oliver (Keira Keeley) show up, having learned of the planned sale, with the financially challenged Christina (who lives off stolen credit cards) rightfully declaring that she is now the legal owner of the house, and has no interest in sharing whatever it sells for. Further, Oliver, using Facebook, friends his late aunt’s much younger boyfriend, Rodney (Jonathan Walker), who hadn’t seen Adriana in 20 years; a conniving sleazeball himself (he traffics in body parts), he shows up to see what he can squeeze from the situation for himself.


With these elements in place, the play proceeds to work out who gets what, as well as who sleeps with whom, and all comes to a suitably neat conclusion, with a comeuppance for the undeserving. It’s not really necessary to quibble about the relative implausibility of the proceedings; Mr. Busch does a neat enough job of setting up his characters and situations to make them believable enough, but the play, once it begins chugging forward, does so in fits and starts, with too much time devoted to trivialities of character, narrative backstories, and comedic dialogue that too frequently falls as flat as Mr. Busch without his falsies. I don’t deny the occasional laughter in the house, some of it fairly strong; it just seemed far less frequent than a play of this sort requires, and also far more polite.


Mr. Busch does his standard female impersonation shtick, with bits and pieces of the famous stars emerging from Jimmy's mouth almost as if he were not so much a person as a Frankenstein’s monster made up of film quotes and accents with no voice of his own. Ms. Halston, in one of the biggest laughs, is reprimanded for annotating his references, so that no one will miss who Jimmy's channeling. There’s definitely an audience for such campiness, but it’s been done better and funnier before, particularly by Mr. Busch, and there’s little here that seems new. Mr. Busch’s acting, like that of all the others, is entertainingly one-dimensional, in keeping with the nature of the plot; however, over two hours of this sort of stuff makes you want to pay tribute not to THE TRIBUTE ARTIST but to all those other current writers who know that, if your material doesn’t demand it, you must bring that curtain down after an hour and a half. Without an intermission.
Posted by Samuel L. Leiter at 8:43 PM