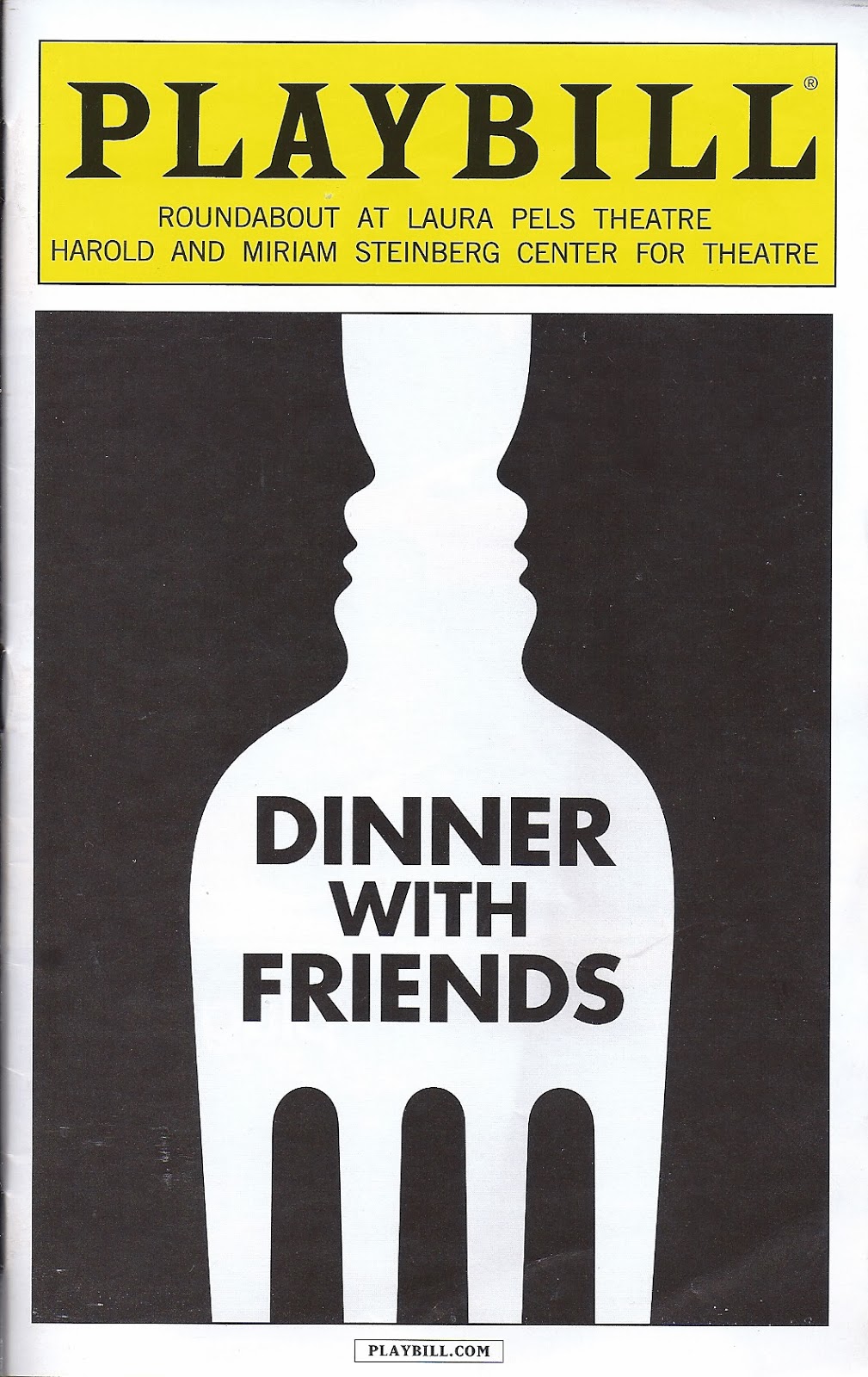 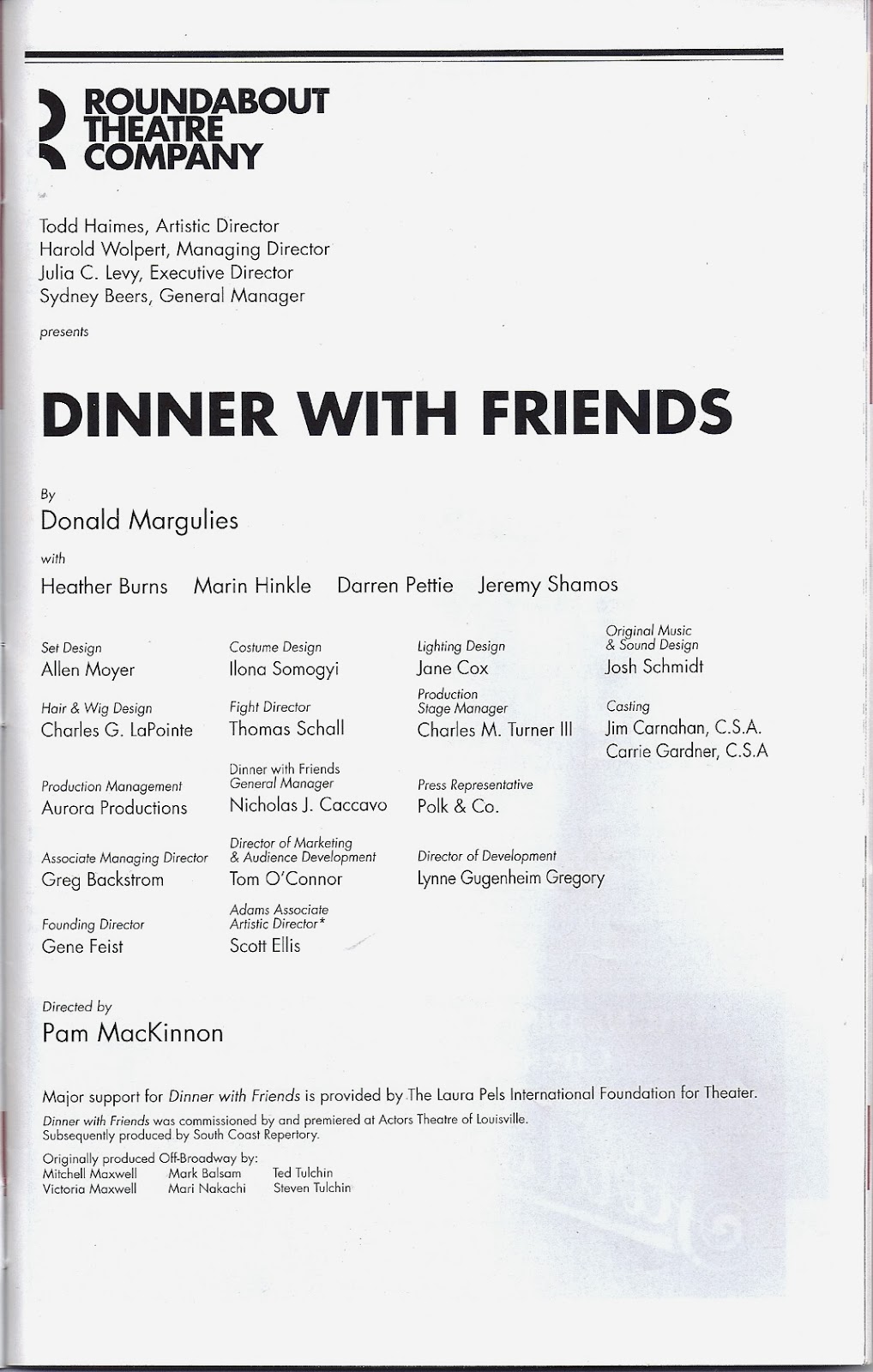 Donald Margulies’s DINNER WITH FRIENDS, winner of the 2000 Pulitizer Prize, is receiving its first New York revival in a fine production staged by Pam McKinnon for the Roundabout Theatre Company at the Laura Pels Theatre. The two-hour, one-intermission, dramedy stars Jeremy Shamos and Marin Hinkle as Gabe and Karen, successful gourmet food writers preoccupied with good dining and wine; their marriage is happy and stable, but nonetheless subject to the subterranean stresses and questions that affect most relationships once the honeymoon is over. Their best friends, Tom and Beth, who marry after Gabe and Karen set them up on a sort of blind date at their Martha’s Vineyard summer home in the early days of their marriage, are played by Darren Pettie and Heather Burns. One snowy evening at Gabe and Karen’s, when Beth is over for dinner without Tom, who’s at the airport waiting for a plane, Beth breaks down and reveals that she and Tom are getting a divorce because he’s having an affair with a “stewardess” (she turns out to be a travel agent). When Tom learns that Beth told the other couple about the breakup without his having had a chance to share his side of the story, he grows enraged, but the argument that ensues only serves to warm the pair up for a bout of steamy sex. 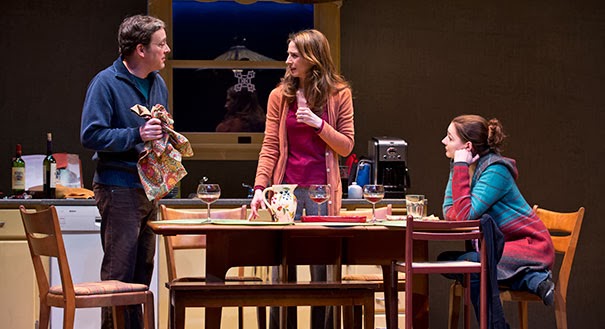 Still, the revelation of Tom and Beth’s marital crash is the trigger that sets off the principal issues regarding love, sex, marriage, and friendship with which the play is concerned. We not only see the paths taken by Tom and Beth as they describe the happiness they find in their new relationships, but we see the effect of their breakup and subsequent discovery of new partners on the hitherto rock solid marriage of Gabe and Karen and on their personal feelings for people they’ve long considered close friends.


Mr. Margulies sensitively charts the evolving changes in Gabe and Karen’s marriage as well as their responses to the way Tom and Beth are working out their problems. To give us an idea of how things were at the beginning, he begins act two by suddenly shifting us from the present to the time when Tom and Beth were introduced at the Martha’s Vineyard house, giving us a glimpse of the young Tom and Beth that allows us to better understand the self-involved people they’d eventually become. Later, there are scenes between Beth and Karen and Tom and Gabe that more fully express the way they’ve evolved, and why both Gabe and Karen find themselves falling out of love with their former best friends, while simultaneously worrying over the fate of their own relationship. Gabe and Karen fight for the principle that people should fight to preserve their marriage, regardless of the bumps and bruises, and can’t accept that divorce can sometimes lead to happier lives for those concerned. The evocative, often stingingly funny dialogue is filled with painfully honest revelations and responses that many will recognize as echoes of their own lives and concerns.


The four-member cast makes a quality ensemble, although I found Ms. Burns to incline too closely toward performing, rather than being, her character. Ms. McKinnon’s direction is well paced and the various scenes are emotionally balanced, effectively capturing both their comedy and drama. Allen Moyers’s attractive set, nicely lit by Jane Cox, is a cloth covered box-like environment into which scenic units, like a kitchen, two different bedrooms, a living room, a patio, and a bar slide easily in from the wings, with windows within which snow keeps falling flying in when needed. Color-wise, these scenes are rather muted but the one in the Martha’s Vineyard kitchen offers a burst of lovely blueness, with an impressionistically painted backdrop representing the sky and the great outdoors.
DINNER WITH FRIENDS remains tasty and nourishing, and well worth the price of the meal.
Posted by Samuel L. Leiter at 7:54 AM