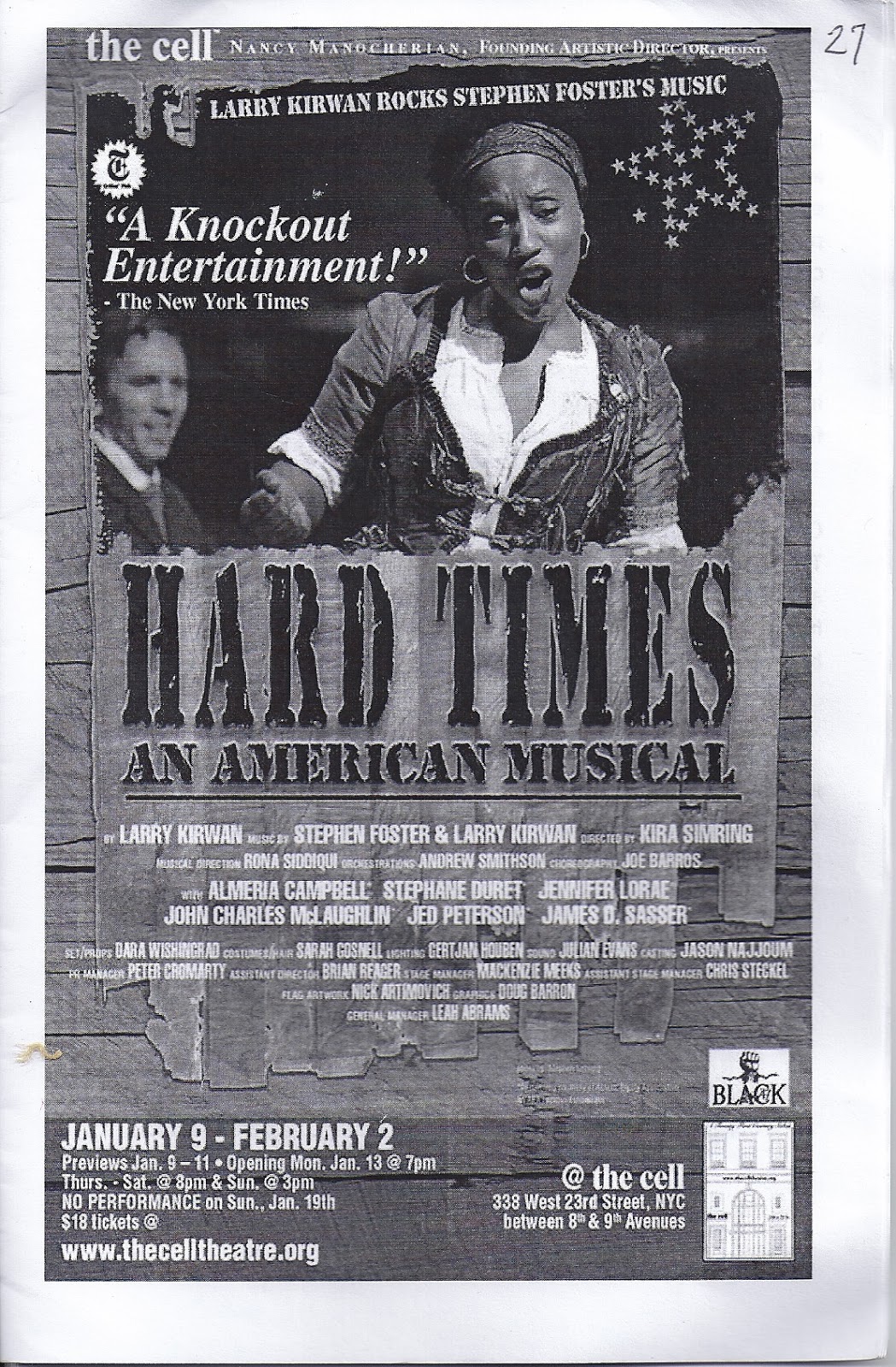 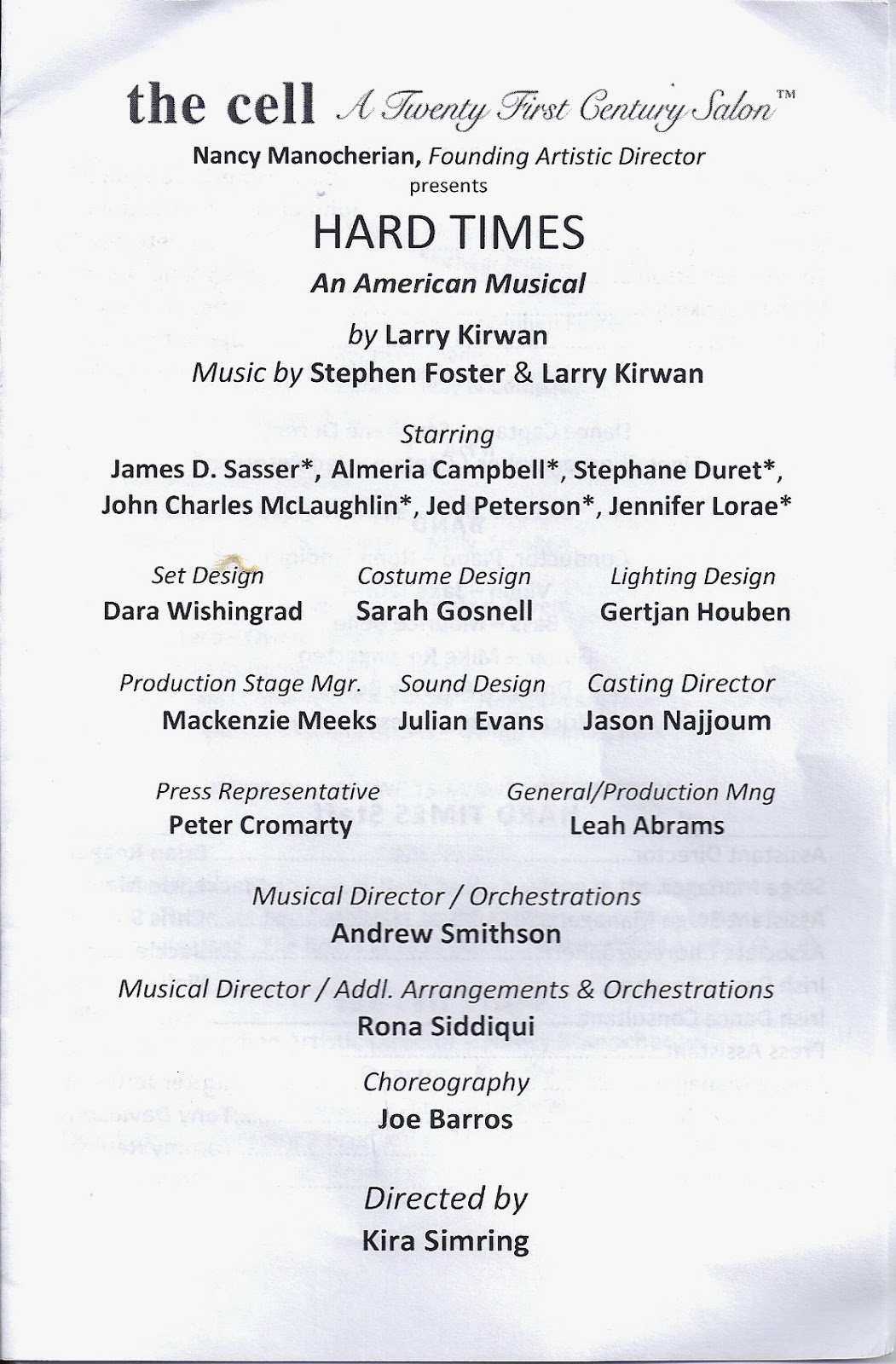 Stephen Foster wrote many songs for mid-19th-century blackface minstrel shows, a precursor of musical comedies, but his achievement as “the father of American music” was influential enough for us to consider him the Porter-Rodgers and Hammerstein-Berlin-Sondheim of his age. Although he would have been a millionaire had he lived in the 20th century, and did earn substantial sums for his times, by the mid-1850s he ran into debt and dried up creatively.  During the Civil War, he struggled to survive, sometimes living in the rough and ready Five Points district of lower Manhattan, colorfully captured in Martin Scorcese’s movie GANGS OF NEW YORK. The distinctively effective musical, HARD TIMES: AN AMERICAN MUSICAL, at the tiny Cell Theatre on W. 23rd Street, originally seen in 2012, centers on his life during this troubled period, focusing specifically on July 1863. That was when, with his wife and child living in his home town of Pittsburgh (he was not a Southerner, as widely believed), Foster tried to find his muse again while frequenting (supposedly) a Five Points tavern run by a black woman, Nelly Blyth (Almeira Campbell), for an interracial clientele. 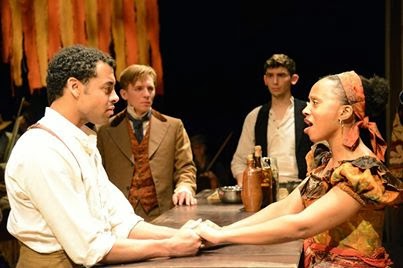 HARD TIMES, craftily written by Larry Kirwan, beautifully staged by Kira Simring, and exceptionally well-choreographed by Joe Barros, doesn’t have a highly developed plot, but it manages to introduce us to the cultural, social, racial, and political world of New York in a fascinating ambience wherein Foster’s personal problems are set against the local reaction to Mr. Lincoln’s war. The recently promulgated Draft Act has fired the town’s burgeoning Irish immigrant population to revolt and there is animosity between the Irish and colored folk in whose name the war is ostensibly being fought, and whose freedom would represent a potential threat to the jobs the Irish now hold. The characters in the play find refuge from the street violence by holing up at Nelly's.


The script imagines that Foster (Jed Peterson) once had a homosexual relationship with blackface Irish entertainer Owen Duignan (John Charles McLaughlin), although the idea of Foster being gay is purely speculative. The other characters include Thomas Jefferson (Stephane Duret), a free black man who helps out at Nelly Blythe’s, and Michael Jenkins (James D. Sasser), a white man who represents the local authority, considers himself a true American, and is in love with Nelly, although unwilling to go so far as to marry her; later, he reveals his own racial bias when he rants against flooding the streets with “more darkies.” Five Points denizens who participated in interracial relationships were called “amalgamationists.” Nelly herself was married to an Irishman (or “Paddy”).


Within this world fraught with so many tensions there also was, according to HARD TIMES, a rivalry between the shuffle dancing of the black people and the step-dancing of the Irish, which the show exemplifies in several memorable numbers, especially when Owen and Thomas engage in a challenge dance routine. There's also some interesting debate over the racial attitudes embodied in Foster’s music, or in the way that entertainers performed them. Blackface itself is criticized for its insensitivity, but I wonder if this isn't revisionist thinking about attitudes that may not have been on anyone’s front burner in 1863.


Foster’s strained relationship with his loving wife Jane (Jennifer Lorae) is performed in flashbacks set in their Pittsburgh home, where he seems on edge and unwilling to respond to her affections. Mr. Kirwan’s script would have us believe that his sexual confusion is the cause of Foster’s marital discomfort; Foster is unwilling to confront his issues and takes his frustrations out by leaving home and turning to drink. Some liberty is taken with his death at the end, which happened not long after the play’s action when, only 37, he had an accident in his hotel room. Although his final song, “Dear Friends and Gentle Hearts,” left behind on a scrap of paper, may not have come to light as it does in the saloon, its discovery offers a lovely opportunity to bring the show to a conclusion.


HARD TIMES, which runs two hours and 15 minutes, isn’t perfect; there are places where Foster’s story could be better illuminated, a few scenes seem overly contrived, and some of the dialogue veers a bit too far into anachronism (lots of talk about "my black ass," for example), but as a piece of theatre it’s almost entirely unified and appealing. The six-member company is a well-integrated ensemble of singers and dancers; not all the voices are on the same level, but the best are good enough to cover the only slightly less polished voices of the others. The renditions of Foster’s melodic, often sentimental, classics—with terrific orchestrations by Andrew Smithson—all bring new insights, emotional and musical, to them, including “Camptown Races,” “Jeanine with the Light Brown Hair,” “Oh, Susanna,” “Beautiful Dreamer,” and “Old Folks at Home.” New, socially relevant lyrics appear to have been added by Mr. Kirwan, who is also credited as the show’s co-composer, although the program doesn’t make it clear which of the 18 songs are his.


There’s a special charm in seeing this show at the Cell Theatre’s unique, 19th-century town house venue; the performance is in the foyer or reception hall, and there's an overhead gallery for additional seats. You sit on freestanding chairs facing the door to the street, covered with a black cloth, with the musical ensemble of piano, violin, bass, guitar, drums, and African drum seated in front of the curtain-covered windows. To the audience’s right is a bar, where preshow drinks may be purchased but which serves as the chief scenic unit, and there's a large replica of a worn and partly shredded Union flag hanging on the wall. Very little furniture is used, and Ms. Simring and Mr. Barros make marvelous use of the limited available space. The period costumes designed by Sarah Gosnell excellently capture the period feeling, although some more facial hair on the men might have been appropriate. Gertjan Houben's lighting and Julian Evans  sound design complete the excellent technical effects.


Everything ends with a spirited company dance, and you walk out into the night air on W. 23rd Street with that all-too-rare feeling of having been present at a work of theatrical integrity, its flaws seeming inconspicuous when measured against the overall accomplishment. HARD TIMES, both as a reintroduction to the music of Stephen Foster and as revelation of the relevance of his life and times to our own, deserves a longer life. It's certainly the best thing I've seen this month.
Posted by Samuel L. Leiter at 5:09 PM