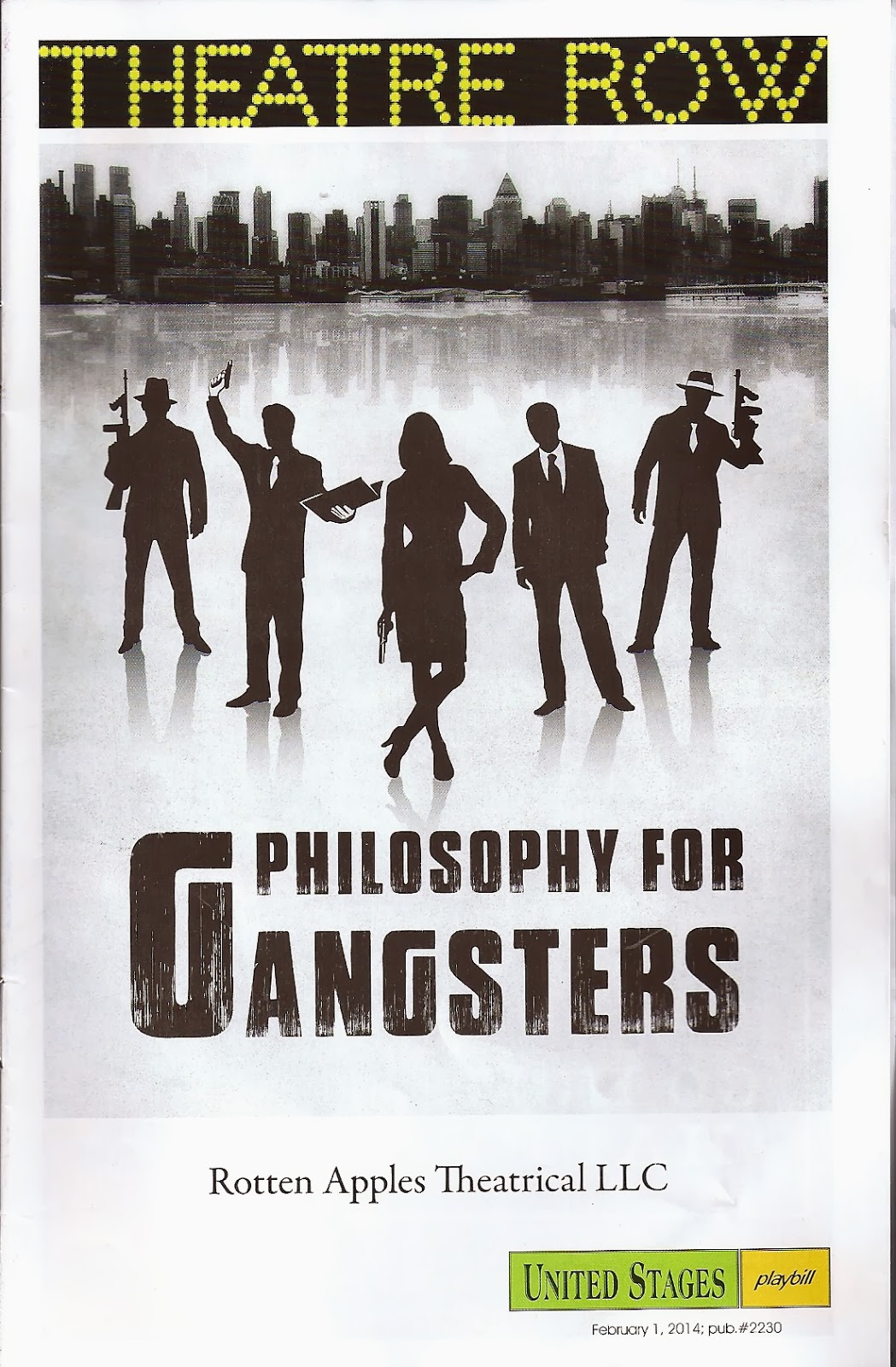 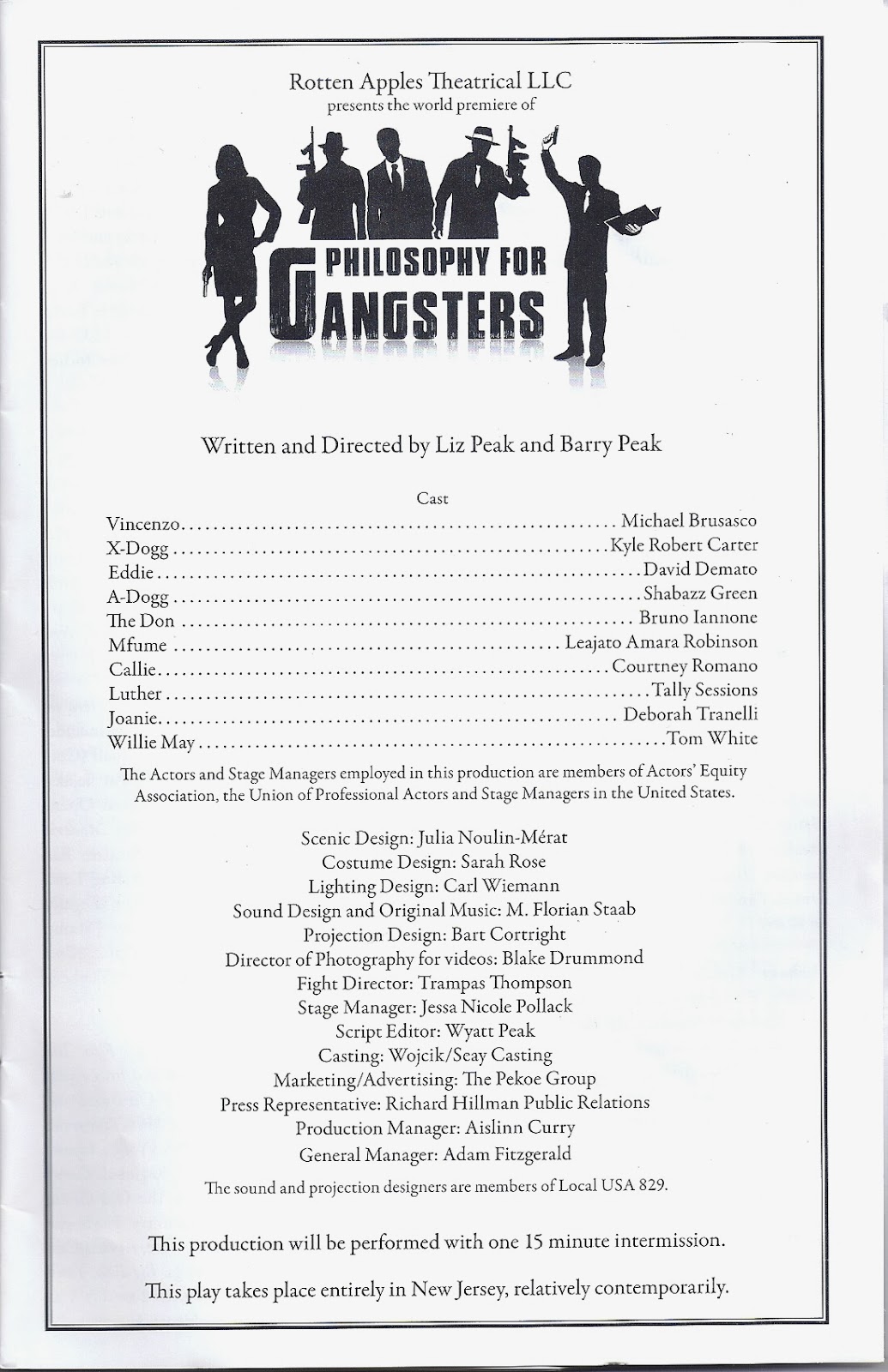 Because of construction on the A train tracks I was forced to take a shuttle bus between Utica Avenue and Jay Street-Metrotech on Saturday afternoon, thereby adding 45 minutes to my usual 40-minute trip to Times Square. I arrived at the Beckett Theatre on Theatre Row at 2:16, around 6 minutes after the play, PHILOSOPHY FOR GANGSTERS, had started, feeling horrible for being late (only the second time among the 500 or so shows I’ve seen since June 2012), although relieved I had no guest waiting for me to arrive. Once I was admitted to the half-filled theatre I took any empty seat I wished, and within minutes began wishing I’d come later. 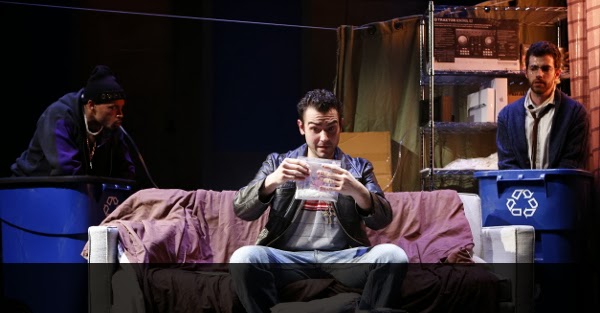 
The oddball effort is by a pair of Australian writers and directors, Liz and Barry Peak, a daughter-father team who are clearly intelligent people with an interestingly skewed sense of humor, and a good idea on which to premise their play; unfortunately, they have little sense of how far out to go on their satirical limb before it breaks. When this somewhat surrealistic, excessively episodic, darkly farcical tribute to THE GODFATHER and “The Sopranos” ended, after an overlong two hours and 15 minutes of agonizingly unfunny violence and philosophizing (yes, philosophizing) amid rival crews of New Jersey Mafiosi and black drug dealers, I felt like one of the victims of the play’s reprehensible hoodlums, riddled not by bullets but by bad jokes, unconvincing acting, and a nonsensical plot.


Here’s a rough idea of what transpires. The word “philosophy” in the title, as I’ve hinted, is actually germane to this tale of pseudo-intellectual Italian-American hoodlums under the influence of Callie (Courtney Romano), the Ivy League-educated, black leather-jacketed, skin-tight jeans, and stiletto-heeled Mafia daughter whose family of goons was recently killed by the cops. The gang decides that the root cause of the world’s problems is the philosophy of determinism, which holds that everything that happens is based on predetermined outcomes, with free will (or choice) playing no role. This prompts these honor-bound thugs to take vengeance on philosophers who advocate this position. Callie and her fellow black leather-jacked henchmen, the trigger-happy Eddie (David Demato) and the urbane, knowledgeable Luther (Tally Sessions), who totes around a huge set of lock clippers, pick at random a meek young New Jersey college professor named Wilford May (Tom White); after Luther snips off Wilford’s pinky, they make him their prisoner, keeping him bound and gagged in a plastic trash bin. Callie and her crew are simultaneously doing the same with a black drug dealer (Kyle Robert Carter), whom they casually torture by pumping his stomach. The play is filled with  such supposedly hilarious random violence, and people get whacked willy-nilly before our eyes, with nary a sign of regret or compassion. Presumably, these actions all demonstrate the mob’s belief in free will. All of this is expressed through stereotypical hip-hot attitudes for the black gangstas and similarly broad gestures and accents by the Mafia gangsters.


The crazier the plot gets, the harder it is to sit through; it includes a drug war between the local crime boss, the Don (Bruno Iannone) and the bling-wearing black gangstas X-Dogg (Mr. Carter) and A-Dogg (Shabazz Green); the conversion of the professor into a radical revolutionary who will help them rob a bank (remember Patty Hearst?) and who's credited with carrying out mass murders he didn’t actually commit; the implication that the media are responsible for turning miscreants into popular heroes (à la Che Guevera); a growing attraction between the protesting professor and the callous Callie; and many other too-silly-to-swallow developments made even more difficult to accept because of the many exaggerated performances and thudding direction.


Central to the play’s development is the idea that the two rival gangs attempt to battle out their differences via a philosophical debate between Willie May and a black philosopher named Mfume (Leajato Amata Robinson), who wears pink eyeglass frames and a pink tie, and who calls his philosophical platform “ethnocentric relativism.”  (We learn as well that philosophy has become so hot that the Latino hoodlums now have their own philosopher and that TV shows with titles like “Nietzsche Knows” are now trending well.)


Julia Noulin-Mérat’s unappealing set provides a brick-covered false proscenium, with wood-paneled sliding doors that serve as a kind of curtain. The main acting area is divided into two spaces, the one at stage right a paneled room used for differing locations, the one at stage left a seedy room where Callie and her gang carry out their nefarious duties. Overhead is a projection screen on which are shown not only scenes of different exterior locales and other still images, but which also serves for videos of surveillance tapes, TV newscasts about the crimes being perpetrated, interviews with various citizens about the events transpiring, and even a dialogue scene between a character on stage and (in prerecorded video) the person he’s talking to.


Much of this play concerns our ability to make choices. Unless you’re a determinist, you’ll make up your own mind about whether to visit PHILOSOPHY FOR GANGSTERS. My advice is to stay home or see something else. The choice is yours. Or not.
Posted by Samuel L. Leiter at 8:53 PM