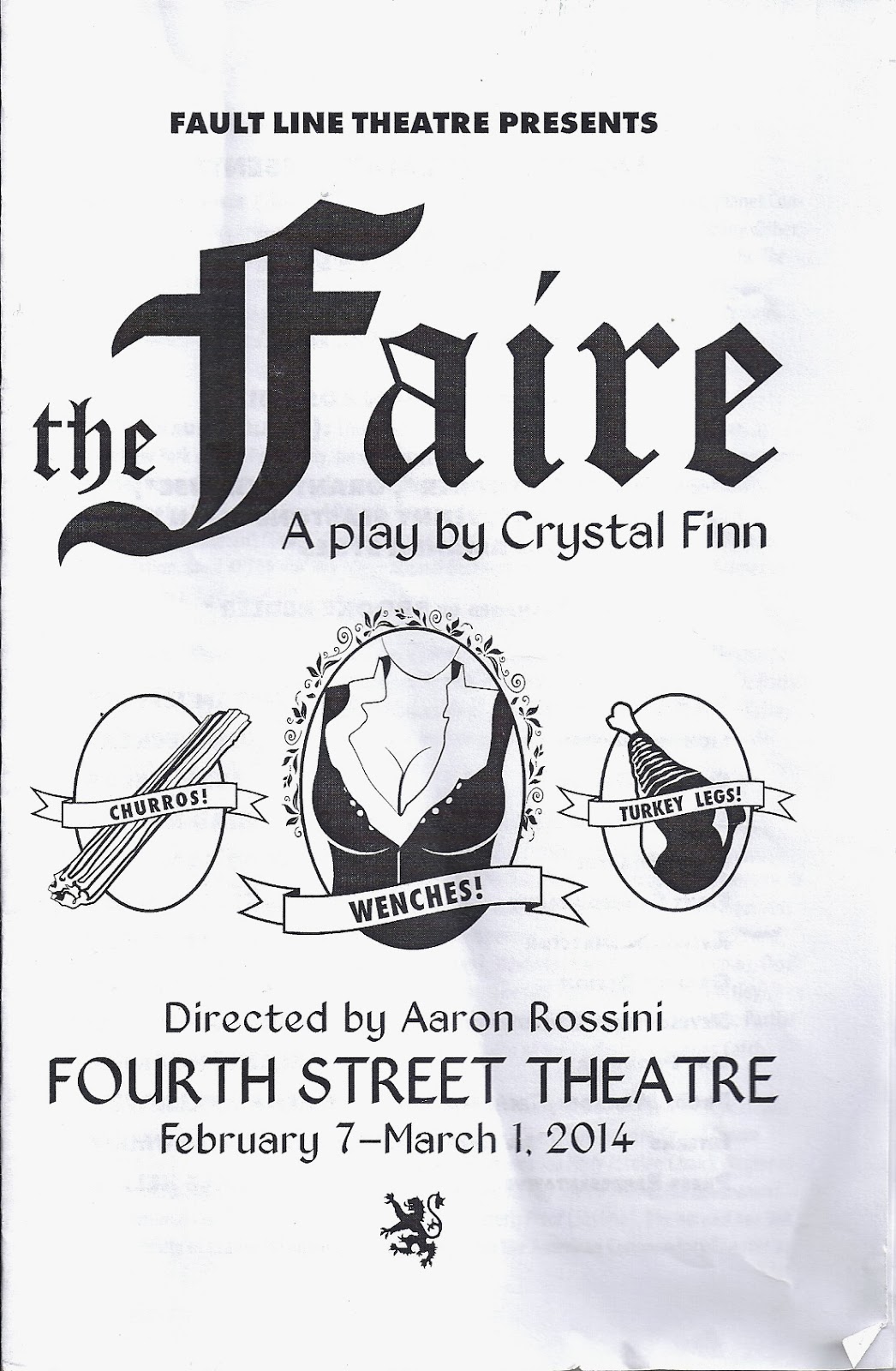 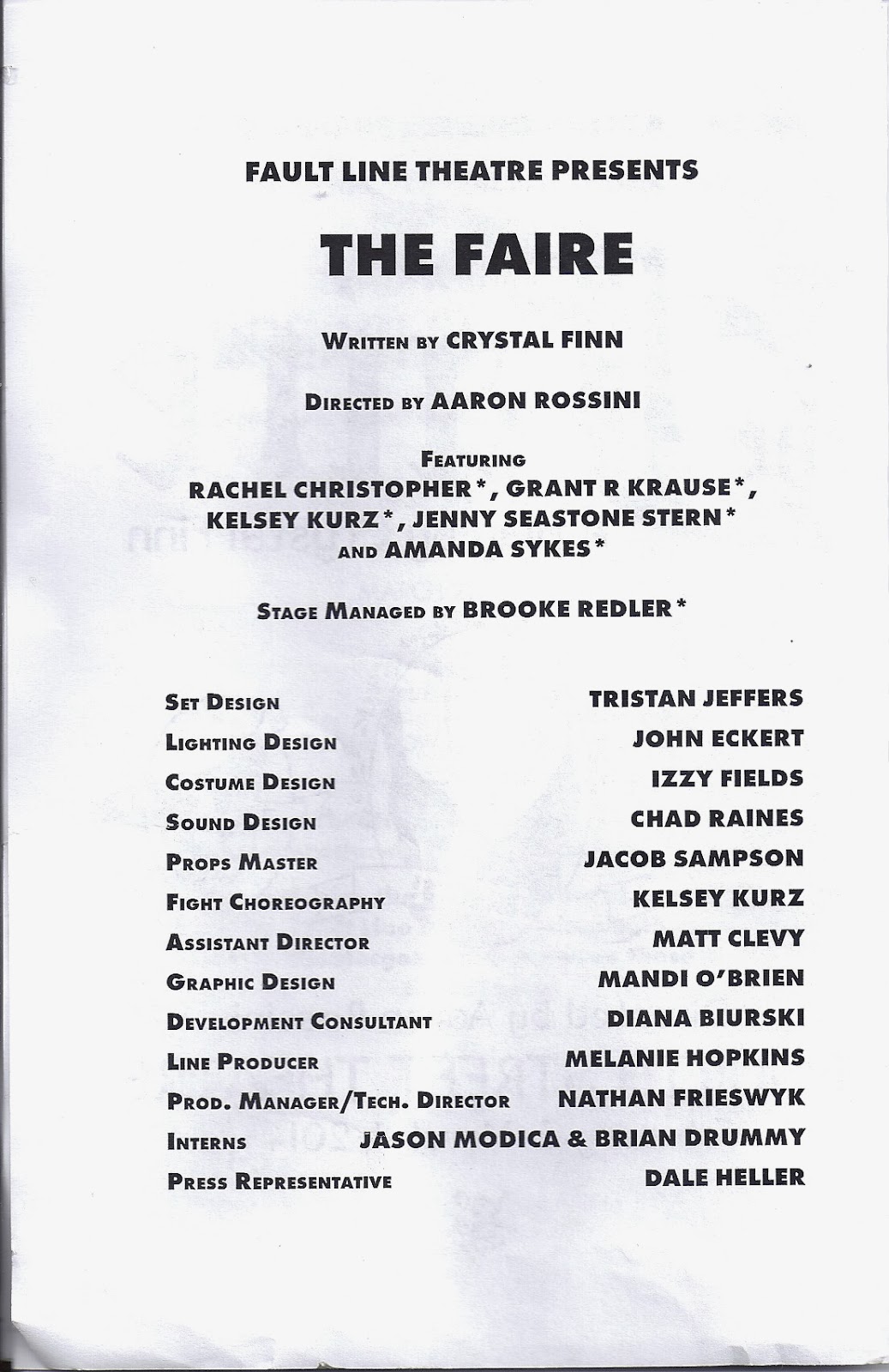 There was considerable drama and suspense in the New York air last night. Unfortunately, it happened on my way to theatre, not once I got there.  (See the postscript.) The play, Crystal Finn’s THE FAIRE, now at the Fourth Street Theatre in a Fault Line Theatre production, is forgettable spoof the world of Renaissance-themed summer festivals and fairs (or faires) that play in numerous locales across the country. A former student of mine, one of the smartest and most talented in my long teaching career, spent a couple of summers doing these shows at Tuxedo, New York, and I’ll never forget visiting him and being surprised by the rather high level of talent on display, with young actors engaging not only in displays of medieval and Renaissance-style activity, like jousting and swordplay, but in abbreviated and nicely rendered versions of Shakespeare’s plays. (I saw AS YOU LIKE IT.) The staging, atmosphere, and costumes were all colorful and authentic-looking, and the sizable number of performers displayed a wide range of performance skills. 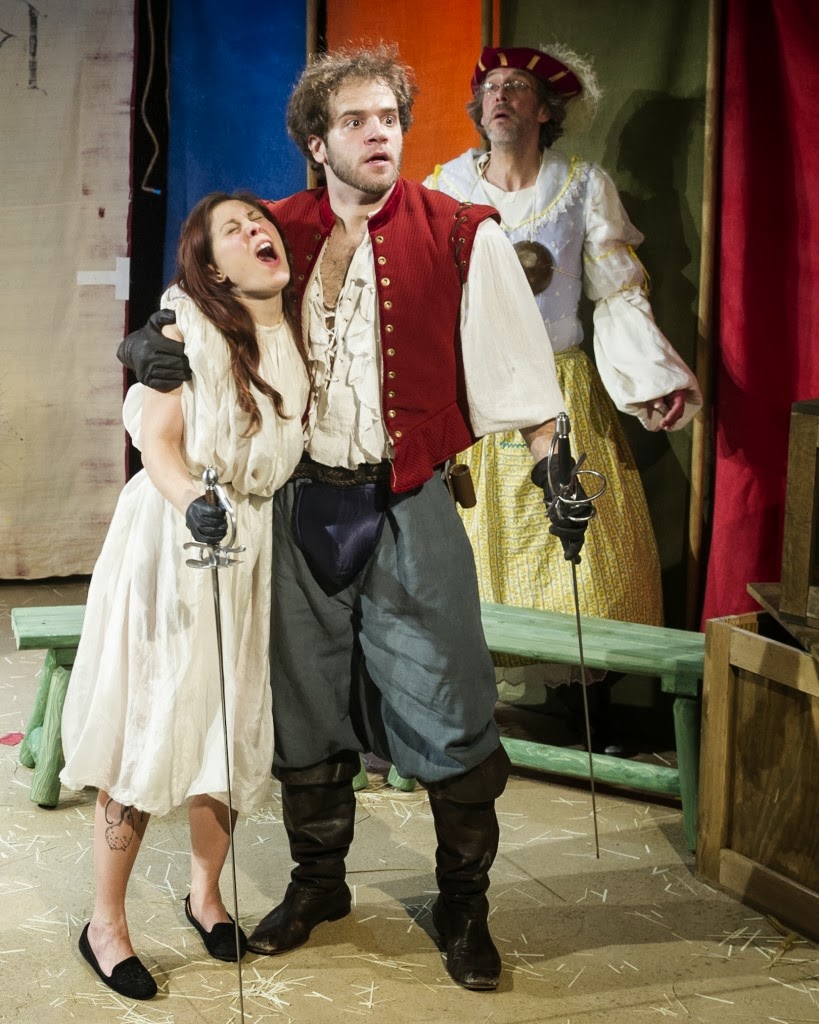 
The earnest efforts of these enthusiastic thespians, as well as their aspirations, are certainly fair(e) game for either serious examination or parody. Ms. Finn’s play, however, which has very little really serious about it, is coarse, clumsy, and comically lame. Once again, sexual outrageousness detracts from any serious issues being explored. Need to perk ‘em up? Why not have your leading man simply walk over to the young woman he’s involved with, lift up her skirts from behind, bend her forward, and thrust away; she’s just there to service the guy, after all. Hey, you’re only young once, right? And, of course, you need the obligatory gay relationship, in this case a lesbian one. Of course, the atmosphere is ripe with trivial vulgarities, and both drink and drugs are as common as the churros one of the characters sells.


Ms. Finn concocts her play by placing a company of five performers in the backstage area of a show tent (designed by Tristan Jeffers) on the grounds of a California faire. Strips of colored cloth with tiny pennants surround the space, and upstage is the rear side of a curtain whose front bears the words Renaissance Pleasure Faire. Wooden crates are scattered here and there, as well as a couple of benches. Everyone wears costumes (designed by Izzy Fields) suggestive of Renaissance styles.


Angela (Rachel Christopher) is the beautiful black leading lady whose rear door is the only entranceway to her that her boyfriend Drake (Kelsey Kurz) seems to be aware of. Drake is a noisily aggressive, oversexed swashbuckling fencer who is preoccupied with his swordplay “matches.” He poses, works out, shouts a lot, and flaunts his oversized codpiece. Angela, who bounces back and forth from normal to clueless, hopes her performances will lead to her becoming a movie star. Angela constantly complains because Jeff (unseen), who manages the show, is asking her to show more cleavage (she prefers “tit” or “titty”); Angela threatens to leave rather than “parcel out pieces of my body.” She’s hit on by the zaftig Wicca witch, Ursula, played by Amanda Sykes doing what seems a dead-on imitation of Aubrey Plaza’s cunningly dry, eye-rolling, malicious affect on TV’s “Parks and Recreation.” Hers is the most memorable performance, although het shtick eventually grows tiresome.

Ursula, the only one with half a brain, wants to have a date with Angela by winning a lottery so they can sit together on the faire’s giant swing, from which all sorts of magical views can be seen. This infuriates the jealous Drake, and confuses Angela, whose sexuality remains ambiguous, even though she once kissed a girl she was attracted to in TITUS ANDROGYNOUS (groan). Then there’s Olivier (Grant R. Krause), an aging, white-haired, bearded actor of the ex-hippy variety dressed in a weird drag outfit with coconut breasts like Luther Billis in SOUTH PACIFIC; he’s an alcohol and weed abuser who keeps remembering some girl he had great sex with on the swing. Finally, there’s Tilly (Jenny Seastone Stern), first seen in angel wings, who incessantly reminds us that she’s a virgin; she's crazy about Jeff but won’t have sex with him. Eventually, she gives in and loudly insists “I am ready to be fucked,” which she shouts for our benefit any number of times, but to no avail.


All the characters inhabit their own private worlds and barely communicate with one another. Often they talk simultaneously, interested only in what they themselves have to say. Not that there would be much to listen to if they tried. There's a trickle of a plot about the faire losing money because of poor attendance and the danger of it becoming a giant auto mall. Not to worry. It will become a giant Laundromat instead.

The play concludes with sound and lighting effects (designed by Chad Raines and John Eckert, respectively) suggesting some catastrophic event taking place (bulldozers tearing the fairgrounds asunder?), and, after the stage turns black, revealing Ursula on high against a sky studded with stars and spouting a pseudo-philosophic monologue.


To be fair,  the actors involved would not seem so out of place in better material than THE FAIRE provides. They work hard under Aaron Rossini’s earnest direction but, for all their exertions, a sow’s ear remains a sow’s ear.


PS. This being a blog, I’m free to step aside, even if only momentarily, to share personal aspects of my theatergoing experiences, so here’s the not so funny thing that happened on the way to the theatre. I was on the 4 train heading into Manhattan from Brooklyn when we were delayed at Bergen Street. Other delays had already caused the train to be running late and it was nearing 7:30. Since I’d have to switch at Brooklyn Bridge for the 6 train to Astor Place, it looked increasingly unlikely I’d make the 8:00 curtain.  I watched a couple of 3 trains pass on the other side of the platform and heard several announcements of a power outage at Grand Central that was causing delays on the 4 and 5 lines. Finally, at 7:30, I jumped aboard a 3, thinking I’d take it in to the city and get off somewhere downtown and grab a cab to the theatre, which is on E. 4th between the Bowery and Second Avenue, next to the New York Theatre Workshop.


As the train lurched forward I noticed that the stalled 4 I’d just been sitting on was moving too, and soon we parted ways. When my 3 hit Chambers Street, I did my best version of leaping out, despite the bursitis in my hip, and clambered up to the street level in an area of town of which I know very little. There were cabs there but all were full. Then, a block away, I spotted people getting out of one, rushed into it, and told the driver where to take me. I thought I heard someone shouting imprecations as I did so. Could that handicapped man crossing the street behind me have thought it was his cab?


It was 7:50, 10 minutes from curtain time, and I had to get from Chambers in Tribeca to E. 4th in the East Village in traffic made worse by the slippery streets. The guy getting out of the cab said the driver really knew his way around, so I watched as he maneuvered through the dark, car-clogged streets, making his way to Sixth Avenue, turning right on Houston, and pulling in to the left turn lane at the Bowery, but because of the cars in front of us, not in time to make the green arrow. Obsessive about being on time, especially as a seat was being held for me, I struggled to get a clear glimpse of our progress, which isn’t easy in the back seat of a taxi, but breathed easier when we turned right on E. 4th and stopped in front of what, on the outside, looks like a residence, not a theatre. Being unfamiliar with the credit card machine in NY cabs, I took a couple of swipes but couldn’t make my card register, so, desperate now, I paid in cash, giving the driver a bigger tip just to save time. At that point, I could have tipped him twice as much and still not cared.

Rushing up the stairs, I discovered that the door to the venue was locked, and that none of the buzzers had a theatre name on it. However, the theatre was just inside the door and someone spotted me, let me in, and gave me my program. Even after I took off my jacket, scarf, and sweater, and sat down, it was 8:07. Since most shows don’t actually start until 8:10, I thanked my stars for this usually frustrating convention (when you're anxious for the show to start).

Thus ended my excellent adventure in getting to THE FAIRE.
Posted by Samuel L. Leiter at 7:50 AM