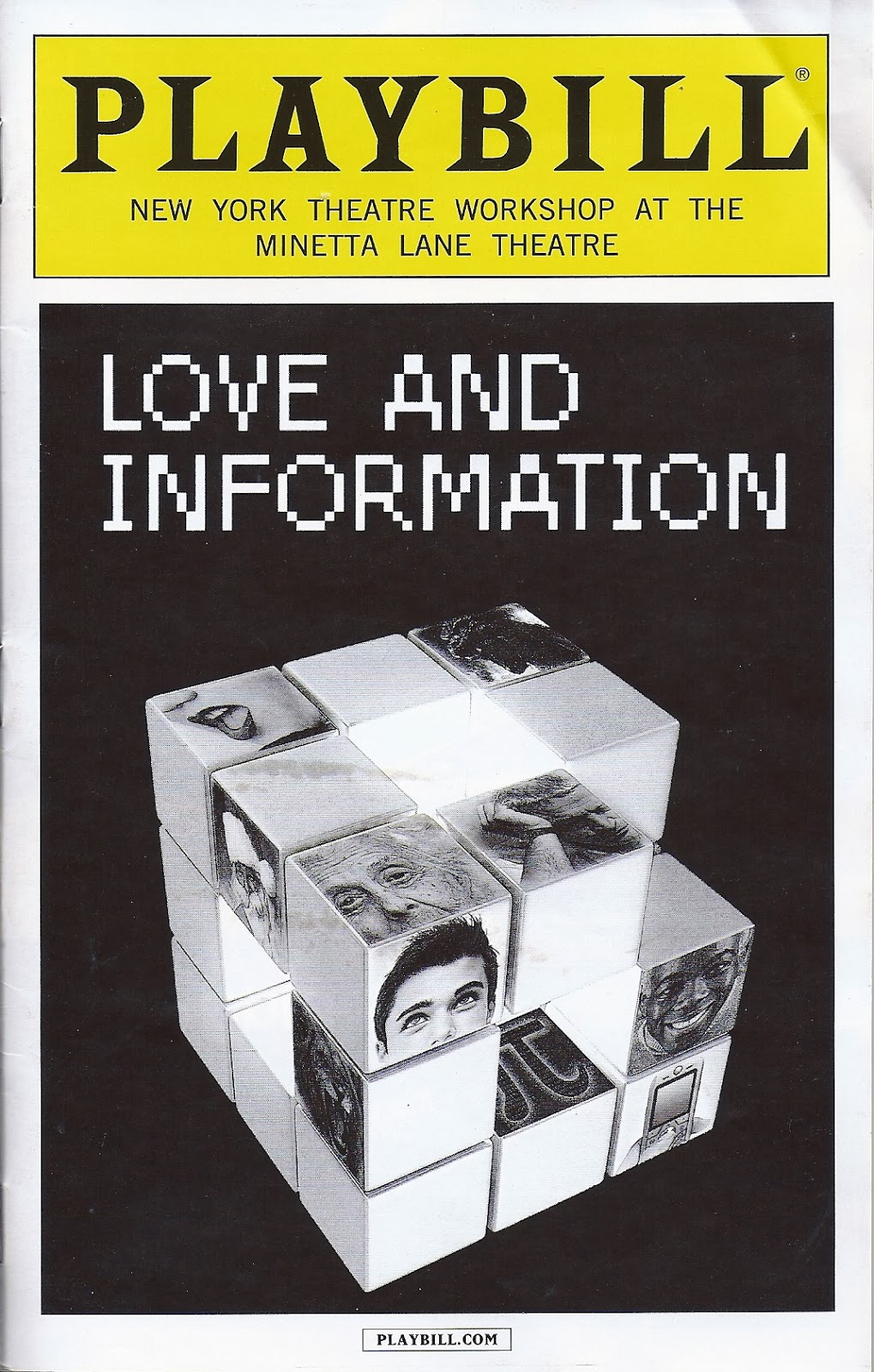 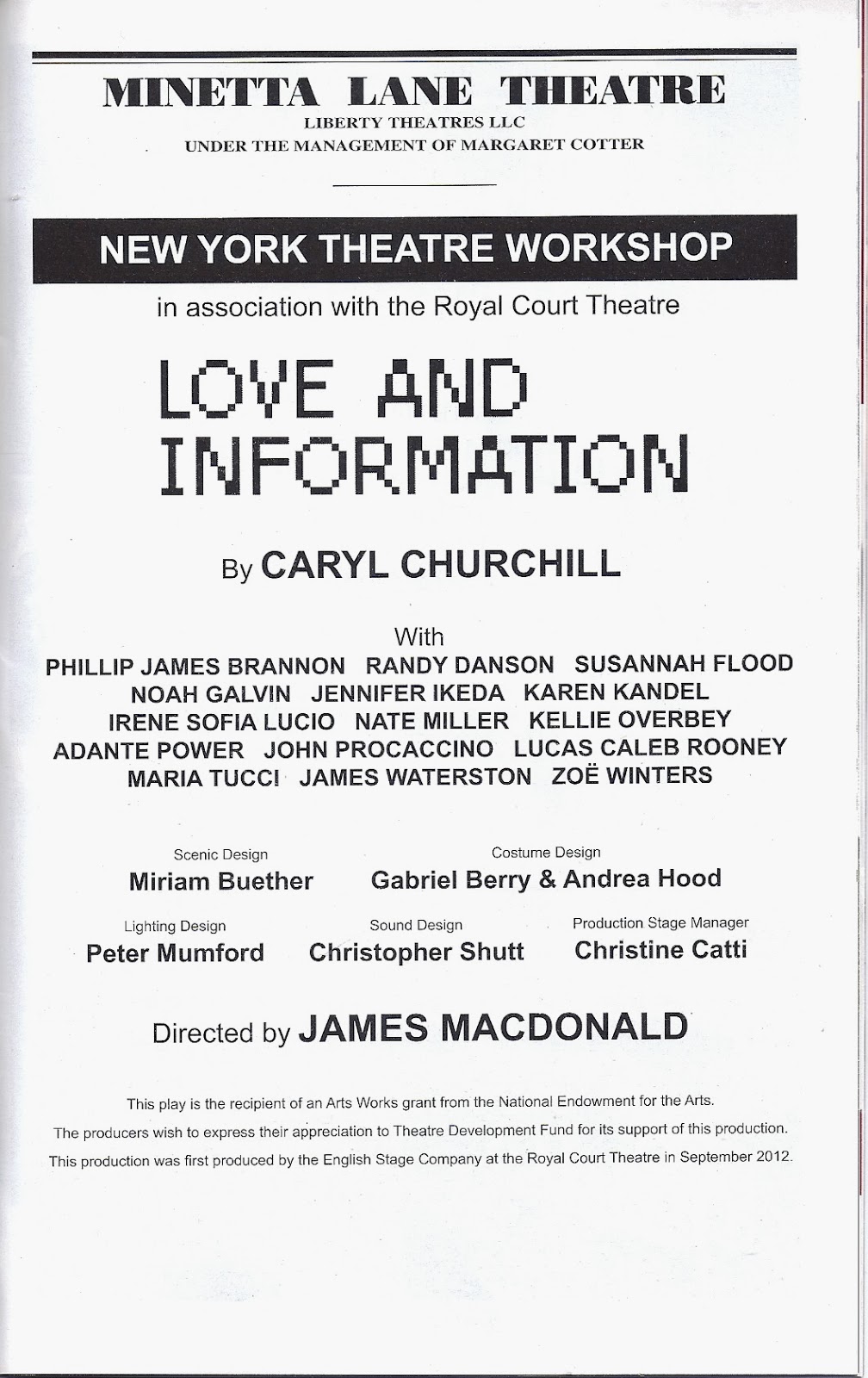 If you’re looking for a show with great sound design, let me recommend LOVE AND INFORMATION, by the major British playwright Caryl Churchill, originally produced to warm responses at London’s Royal Court Theatre and now being shown at the Minetta Lane Theatre under the aegis of the New York Theatre Workshop. Here, too, it has received strong approval from many ("hilarious," "poignant", etc.), with a small number of dissenters joining in as well. A company of fifteen actors, some of them among the most familiar faces in the Off Broadway arena, speeds through a nearly two-hour, intermissionless play that requires 57 scenes and more than 100 characters, in what is for performers, designers, and stage management a tour de force of theatrical expertise. 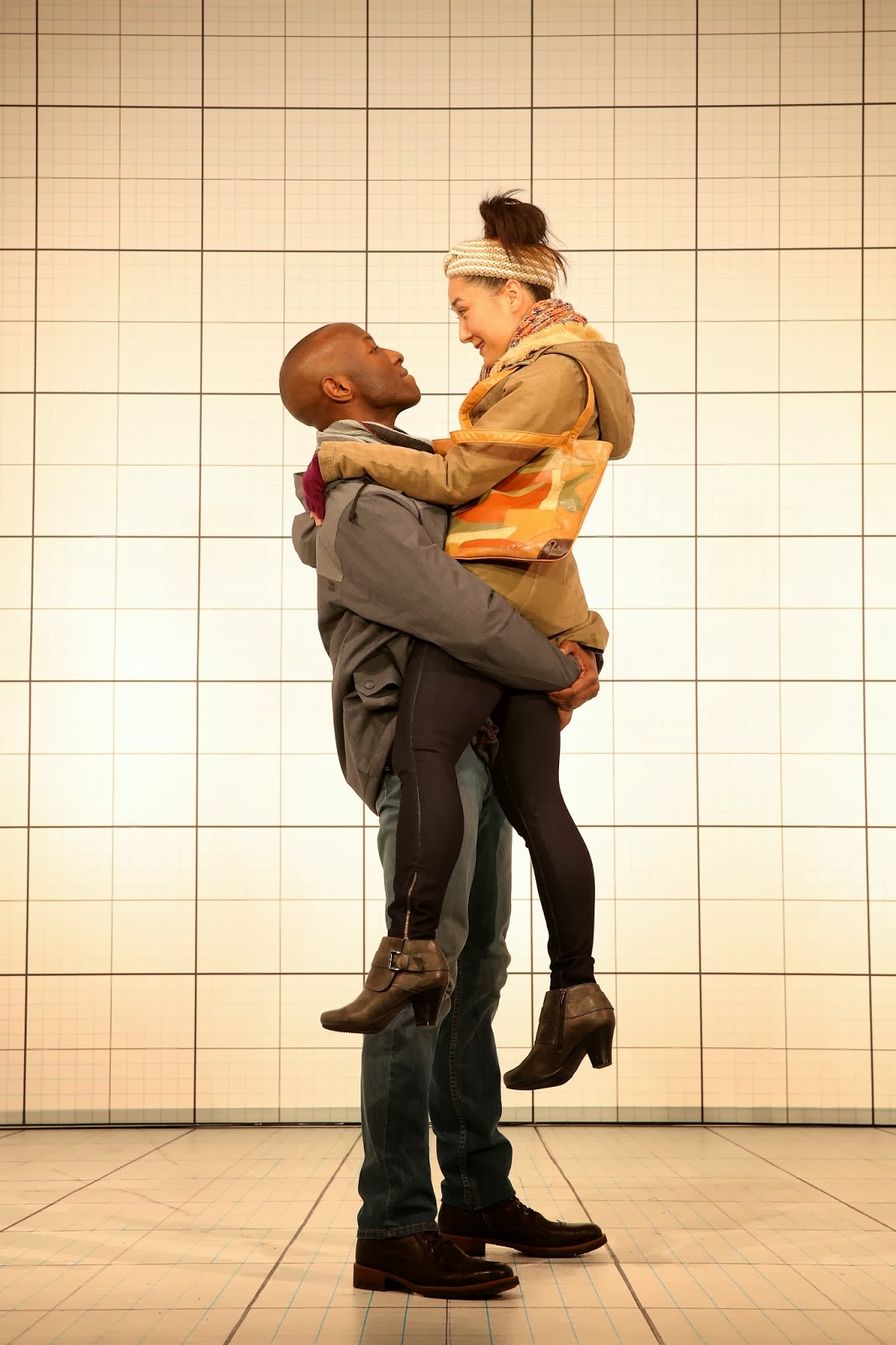 Never mind that the scenes range from several seconds to several minutes each, that none of the characters appears in more than one scene or even has a name, that the abstract set remains the same while varying from scene to scene only by the clever choice of scenic props, that there is no narrative arc as a whole and that deconstructing the play’s meanings requires academic analysis, and that if you realized half way through that there was only more of the same ahead  you’d be thankful for an aisle seat to let you slip away quietly (the rows are too tightly packed to leave without a fuss). At least you’d be happy with the excellently realized technical requirements, the remarkably fast and mysteriously executed scene and costume changes, and the memorably ear-catching mixture of music and sound effects created by Christopher Shutt to cover the numerous shifts.


Ms. Churchill’s play, which has been Americanized for its New York ensemble (including such talents as Karen Kandel, Kellie Overbey, John Procaccino, Maria Tucci, and James Waterston), is divided into more than half a dozen numbered sections, each number being projected on a screen, with multiple thematically linked scenes in each section. The printed script contains titles for the scenes, but these aren’t introduced during the production, nor are they in the program. The playwright’s instructions note that scenes within sections can be played in any order. Early examples of scene titles include “Secret,” “Census,” “Fan,” and “Torture.”

The dialogue is written in brief snippets with nothing to explain who’s speaking; in fact, there’s no indication of who the characters are at all, so the choice of who says the lines, what the situation or setting is, and so on can only be that of the director, in this case, the imaginative James Macdonald, who staged the Royal Court original. His achievement in bringing clarity to the individual scenes, which are essentially straightforward and realistic, no matter how vague their intentions, is exceptional. He also mines the material for comedy when appropriate, as in the scene of a man on an exercise bike talking about his having fallen in love with what sounds like the perfect woman until she turns out to be his computer (just as in the recent movie, HER). The actors all seem to know what their scenes are about, even if they’re on stage only momentarily (as with a pair of Elvis impersonators alluding to the Palestinian-Israeli conflict), and, despite what often seems elusive on the page, everyone’s objectives and attitudes are immediately clear, even if they seem to go absolutely nowhere. I can see the play serving acting classes well because of how it will force actors to find motivations and truth in characters and situations created with only a few strokes of the keyboard.


For a taste of Ms. Churchill’s approach, here’s the complete scene, titled “Sleep,” that ends section 1. We see a man and woman in bed (although there are no stage directions to indicate this).


Just lie there and breathe.


My head’s too full of stuff. Are you asleep?


I think I’ll get up and go on Facebook.


The action all takes place within Miriam Buether’s design of a white box built in slightly forced perspective. The walls and ceiling are covered with graph-paper like lines, and the downstage perimeter of the walls is ringed with tiny lights that come on when the stage proper goes black as scenes are changed. After a few seconds of atmospheric sound, which I assume is meant to somehow convey the essence of the scene to follow, we’re in a fresh environment, made apparent by the presence of some easily identifiable physical object, like a pup tent or beach chairs. In the above quoted scene, the man and woman are in a bed shown standing straight up, as if being viewed from the ceiling. A similar bird’s eye effect shows two boys lying on a slab of grass, one of them upside down, with a baseball bat fixed to the ground near the top. So many scenes transpire like this that one wonders how the shifts are enacted (or where the actors entered from), since the walls of the box, which must be little more than cloth sheets, never seem to be stirring after having just been moved.
﻿ 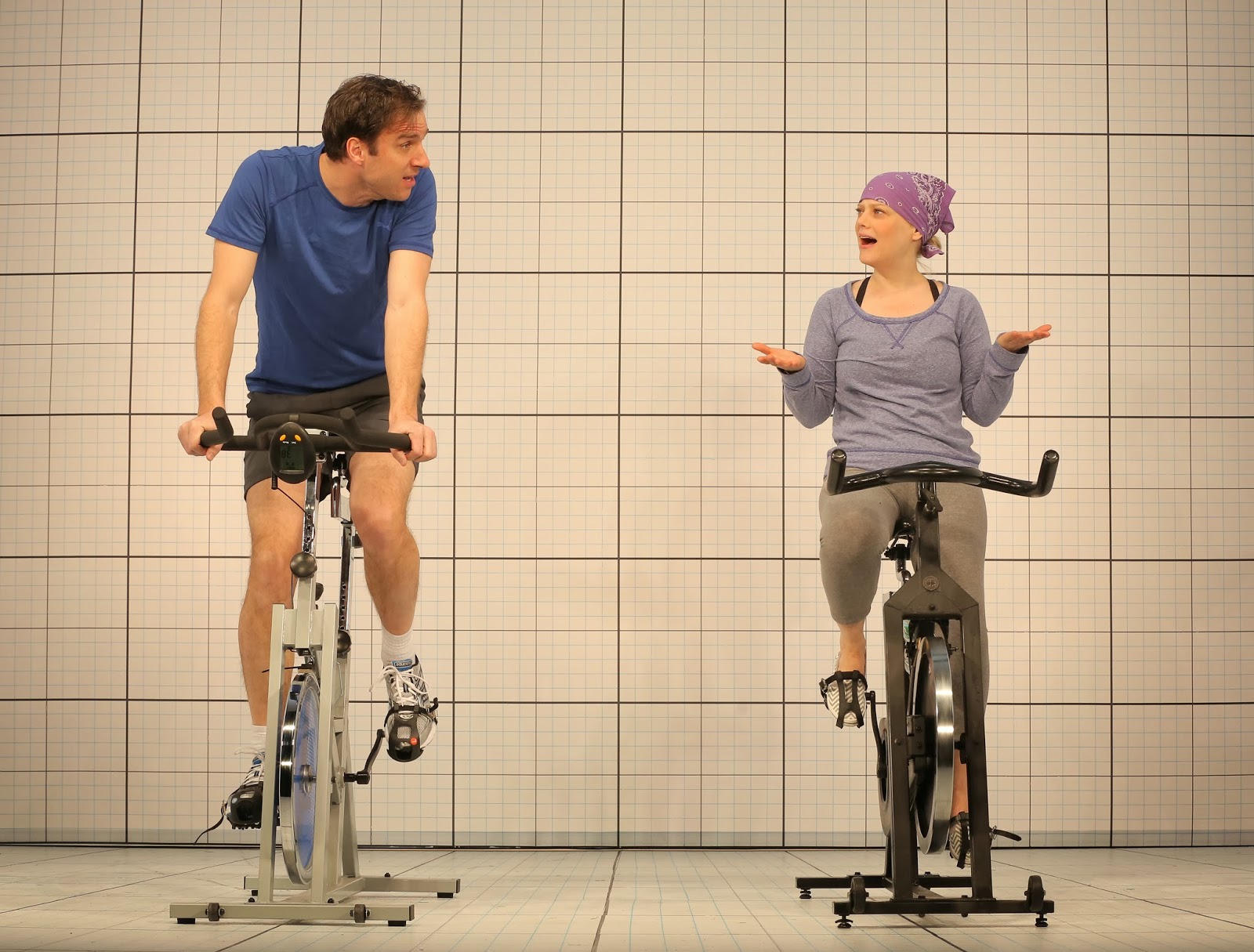 Just as the choice of props instantly conveys locale, so do the countless costumes—excellently designed by Gabriel Berry and Andrea Hood—tell us immediately who the characters are, even when a scene is no longer than six or seven lines long. Peter Mumford’s lighting, which creates especially interesting effects between the scenes, is yet another technically proficient aspect of the production.


The play, begins interestingly enough, as we try to piece the material together, but its endless succession of scenes—with their implications about the sharing of information, our coping with all the information streaming at us, the tenuousness of memory, and the breakdown in human communication—eventually runs out of steam. After one hour, the point seems to have been made. If the idea is to express how we deal with information overload, the play itself cleverly manages to make its point by so stuffing our heads with bits and pieces of information that processing it becomes nearly impossible. Two days after seeing it I had to return to the script to find out what I’d missed. As it moves into its second hour, watching the play increasingly becomes an endurance test, one that I and my theatre companion, at any rate, found nearly unendurable.
Posted by Samuel L. Leiter at 9:00 AM