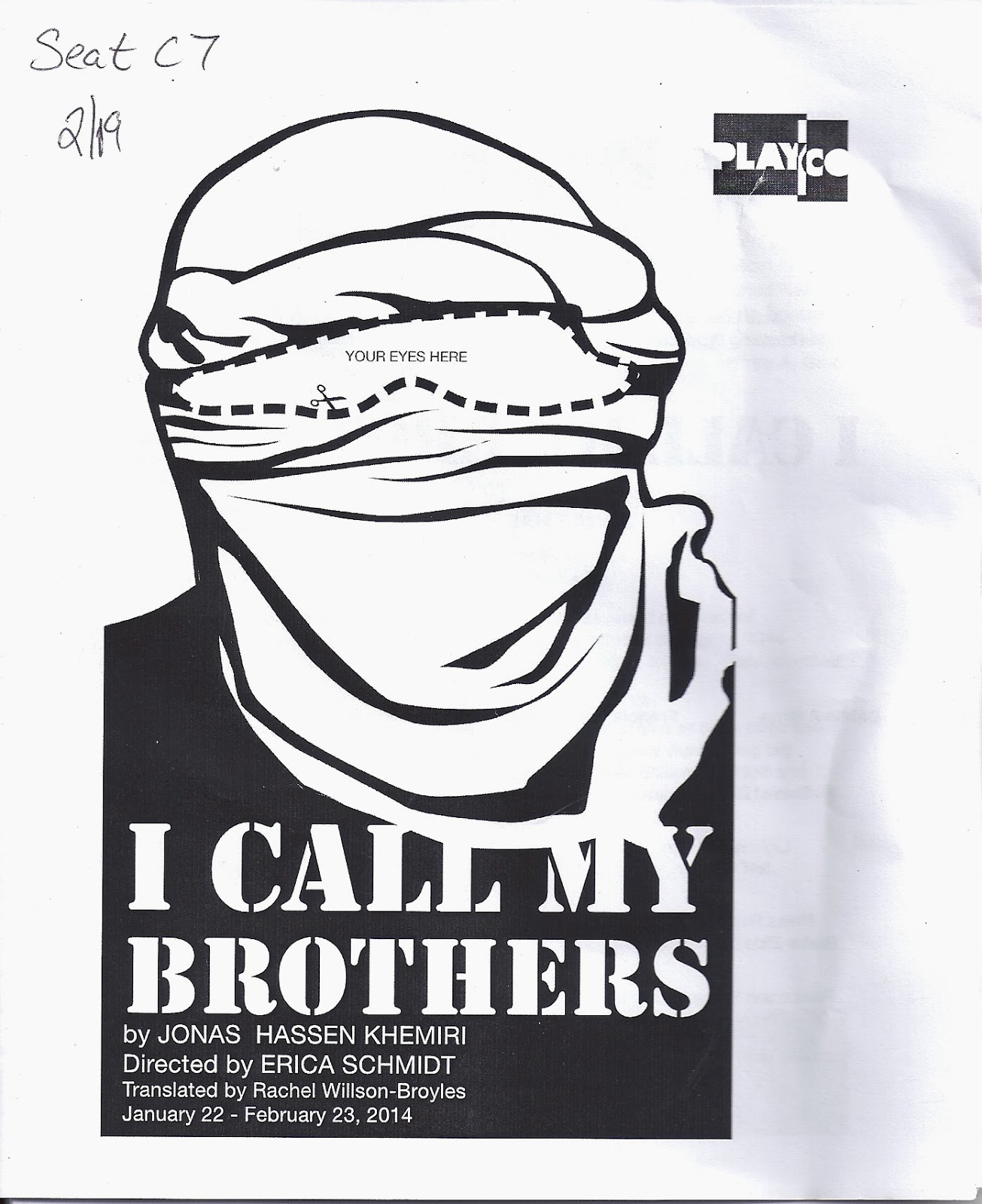 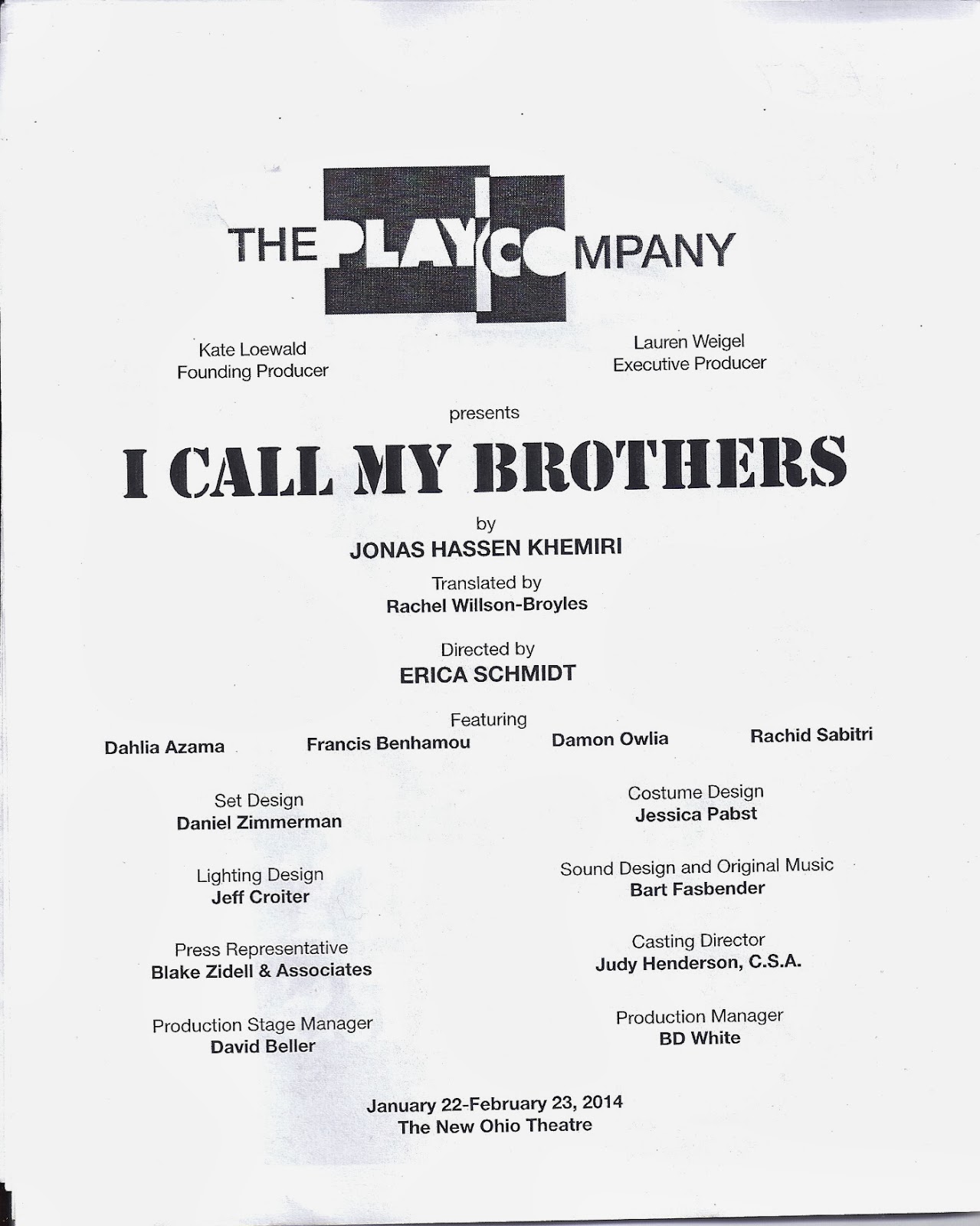 Ever wonder what it’s like to be in the skin of someone who appears to be Arab-American at a time when some terrorist act has been committed locally and the cops are searching for the perpetrators? This premise informs I CALL MY BROTHERS, an overly literary, insufficiently dramatic, but potentially interesting play translated by Rachel Willson-Broyles from a Swedish original by Jonas Hassen Kemiri, son of a Tunisian father and Swedish mother. It was originally written as a prose poem, adapted into a novel, and then revised as a play. I suggest that, despite an earnest production directed by Erica Schmidt (for the Play Company at the New Ohio Theatre) and some positive reviews, it didn’t need the third step. 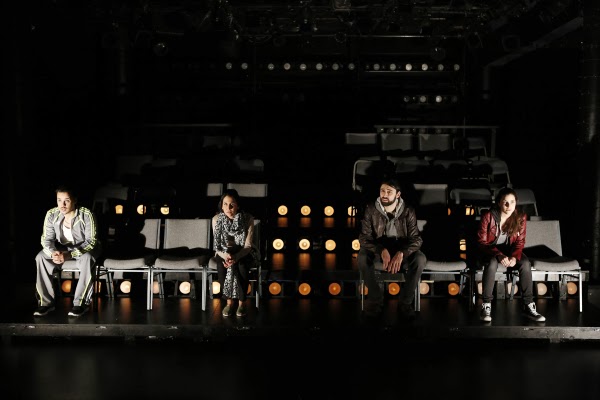 From left: Rachid Sabitri, Francis Benhamou, Damon Owlia, Dahlia Azama. Photo: Carol Rosegg.
Amor (Damon Owlia) is a dark-haired, ponytailed, bearded, hoody-wearing young man, living—in Ms. Willson-Broyle’s English version—in New York City. He’s a chemistry student so fond of his subject he calls his friends by the elements they most closely resemble. Amor has been out dancing at a club until the wee hours and when his best friend, Shavi (Rachid Sabitri), calls to inform him of a car bombing, he’s too buzzed to answer and lets the messages go to his voice mail. The next day he’s asked on the phone by a cousin living abroad to replace a drill head she needs for a cottage she’s building, which—despite his having been cautioned to lay low because he’s said to resemble the bomber—sends him on an errand to a hardware store in Times Square (?!), and makes him self-consciously aware of possibly being surveilled by the authorities.

The play lets us believe that he’s not the bomber, but, because of his paranoiac behavior, it leaves a few hints that he may be guilty of something; he emphasizes that he’s carrying a knife in his pocket but when he describes various nasty things he does with it, his words shift from reality to fantasy. Similarly, we’re not quite sure whether the sunglass-wearing law enforcement officer (Dahlia Azama) watching him and tapping his cell phone is real or in his imagination, but it really doesn’t matter because the playwright is equally interested in other matters. These include Amor’s personal relationships with Shavi, his cousin (Francis Benhamou), a hardware salesman (Mr. Sabitri), a girl named Valeria (Ms. Azama) who doesn’t return his affections, and a Valley girl-accented telemarketer named Carrie (Ms. Benhamou) who tries in call after call to get him to sign up with an animal rights group and eventually recognizes his voice as someone she went with to grade school (groan).  We’ve seen this kind of character before, of course, but Ms. Benhamou deserves credit for nailing it and making it the most appealing aspect of the production. 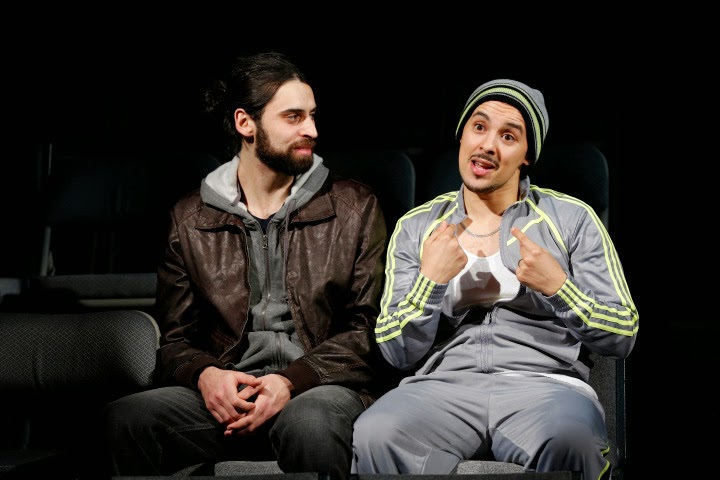 
The characters in this nonlinear play don’t interact through dialogue to move the plot forward; instead, they mingle direct address monologues that cross over from the first to third person as the characters speak not so much to one another but to the audience, as if recounting something that happened in the past even when it’s happening in the present; when speaking to each other they’re also speaking to us. While this may work on the page, on stage it seems precious and distracting, only heightening the already vague evolution of the story, whose levels of reality remain ambiguous. The multiple threads describing Amor’s best friend, his cousin, his unrequited love, his errand, and the animal rights caller all serve like paint thinner to dilute the central action.

Mr. Khemiri’s themes of racial profiling, immigration status, and suicide bombings are all significant, but they get lost in the jumble of side plots. The translation, in moving the action from Stockholm, which had a terrorist bombing in 2012, makes some odd choices when naming specific New York streets and fails to explain why Amor, on a mission to replace a drill head, has to do so in a hardware store in the Times Square area. And in what midtown New York subway station can you easily hold a cell phone conversation?


Daniel Zimmerman’s set is essentially a mirror image of the New Ohio auditorium, that is, black, stepped platforming with the same kinds of seats. Banks of lights are placed behind the seats where the risers would be, and along the top of the set at the rear, and tiny lights rim the false proscenium. Jeff Croiter’s design makes good use of these lights, as well as of the various spots that highlight the actors as they move from one seat to another. The idea of having the stage mirror the audience is perhaps to implicate us in Amor’s problems, but the effect of staring for 80 intermissionless minutes at a bland gray and black environment is not especially appealing.


Aside from Ms. Benhamou’s Valley girl shtick, the performances are not especially distinctive, including the dominant one of Mr. Owlia as Amor. He shows few facets of the character aside from a relentlessly energetic yet benign personality, and I doubt that his well-groomed appearance, despite what the script suggests, is one that would quickly point suspicious eyes toward him in a city of 8 million people. I CALL MY BROTHERS is a step in the right direction, but needs many more to reach its destination.
Posted by Samuel L. Leiter at 8:30 PM