"The Prince of Kabuki" 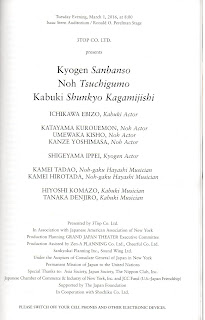 On Monday and Tuesday, February 29 and March 1, New York lovers of Japanese traditional theatre were graced by the presence of Japanese theatre royalty, the kabuki actor Ichikawa Ebizō XII.  In kabuki, as in certain other Japanese traditional arts, names are handed down through the generations to artists belonging to important lineages, and the same artist may hold several different names during his career as his artistry advances. Several kabuki lineages can be traced back to the 17th century, and such is the case with Ebizō, whose line began with Ichikawa Danjūrō I (1660-1704), and whose father was Ichikawa Danjūrō XII (1946-2013). Ebizō is the name almost all members of the line held before taking the name Danjūrō.


This line dominated Edo (Tokyo) kabuki and produced a remarkable succession of superstars, although several Danjūrōs were adopted, breaking the bloodline. After the great Danjūrō IX died in 1903 the line came to an end for half a century. The line continued through the efforts of Danjūrō IX’s son-in-law, a businessman who determined to become an actor after marrying Danjūrō’s daughter; he took the name Ichikawa Sanshō V (1882-1956). Although never appreciated as an actor, his efforts to sustain the family heritage led to his being awarded the name Danjūrō X posthumously the year he died.

While Sanshō himself never became Ebizō, his adopted son, previously known as Ichikawa Komazō IX, did. His adoption in 1940, when he was 31, was marked by his taking the name Ebizō IX, a sign he would one day become Danjūrō himself. As his career boomed in the postwar years, he resisted becoming Danjūrō while his adopted father—who was himself considered a potential successor to the name—was still alive. Even after Sanshō V died and received the name, Ebizō IX, aware of all the obligations that taking the name would entail, held off doing so until 1962. So powerful was the name, which had become almost mythical during its long absence, that the name taking—marked by elaborate ceremonies—was one of the most celebrated moments in modern kabuki history. Tragically, Danjūrō XI died in 1965, when he was only 56. (The entire story is recounted in detail in my book Kabuki at the Crossroads: Years of Crisis, 1952-1965.)

Danjūrō XI’s son, Ebizō XI, became Danjūrō XII in 1985; his accession was marked not only in Japan but in New York during a kabuki program at the Metropolitan Opera House, a first. Ebizō XII is his son, and will surely one day become Danjūrō XIII. As with all sons of kabuki stars he is called an onzōshi, meaning a prince, and it is his obligation to carry on the family name and bring increasing renown to it. Because of whose family he represents, Ebizō XI is the onzōshi of onzōshi, which is probably why his appearance at the Japan Society on February 29 in a discussion I moderated was billed as “The Prince of Kabuki: Ebizō Ichikawa” (a title using the Western order of personal name first).

The major kabuki theatre in Japan, the Kabuki-za, has a section at the top of its highest balcony where you can pay to see a single part of the program, which may have three or four parts to it. It’s the kind of seating we call “nosebleed heaven” because of its height and distance from the stage, but it’s much more viewer friendly than the balcony at Carnegie Hall where my press seats placed me for “An Evening of Japanese Traditional Theatre,” produced by Grand Japan Theatre. On the one hand, I was lucky to be seated in the first row of this vertigo-inducing section, but the red plush bar running along the low barrier before me cut off so much of my view I was forced to watch much of the program while leaning forward. Still, it gave me a good vantage to survey the house which, despite very high ticket prices (some as much as $500), was packed. I later confirmed that the evening was a sellout.
Three pieces were on the program, one each from Japan’s kyōgen, nō, and kabuki genres. Kyōgen and nō share the same theatres and some of the same conventions, and are known in tandem as nōgaku. A minimum of scenic background was provided to serve for all three. Bringing a company of actors to America from Japan is a very expensive proposition; I counted 44 performers’ names in the program. So allowances have to be made for a traveling program giving only a single performance, even at so large a venue as Carnegie Hall.
The pieces performed were a kyōgen version of SANBASŌ, an ancient, wordless, ceremonial dance; TSUCHIGUMO (The Earth Spider), a two-part nō play about a monstrous spider who attacks a medieval warrior; and SHUNKYŌ KAGAMIJISHI (The Mirror Lion), a kabuki dance play about a beautiful court maiden transformed into a raging lion.  SANBASŌ was energetically performed by Shigeyama Ippei, supported by a five-man musical team sitting upstage and playing a flute and three different kinds of drums. This isn’t what you might call a representative example of kyōgen, a form known for its comical sketches, but it serves here to provide a spirited introduction to the evening, with a definite air of auspiciousness. In fact, there are SANBASŌ variations in all forms of Japanese traditional theatre, especially kabuki, so its presence covers all bases.
Likewise, TSUCHIGUMO isn’t the best representative of nō. (There’s also a terrific kabuki version, by the way.) The medieval warrior Minamoto Raikō (Umewaka Kishō) has fallen ill. A priest (Katayama Kurōemon) appears to aid him but soon reveals he’s the spider spirit come to do the patient harm. After a brief interlude, Raikō attacks the spider in his lair (represented by a small framework adorned with webbing); fighting with his spider-slashing sword, Kumokiri, he defeats him in a vigorous battle during which the spider keeps tossing spider webs over his assailant until the floor is littered with them.
Some cost-cutting was apparent when only Raikō fought the spider. In full-scale productions Raikō has other warriors join the attack. Also, traditional nō uses a chorus of at least eight singers seated in two rows at stage left, facing the acting area, not the audience. In this production, only four chorus members are present, and they sat upstage right, one pair behind the other, facing the actors on an angle.
TSUCHIGUMO is far more action-oriented than most nō plays and was surely selected because it doesn’t require much appreciation of its musical or poetic aesthetics. Aside from the helpful synopses in the program, which few spectators bother to read when they take their seats, no translations were provided, not even in the form of surtitles. Most Japanese, who seemed to make up the majority of the audience, don’t understand the difficult, archaic nō language, so, even for them, a play with lots of action is obviously going to be better received than something more literary, no matter how respected for its artistic values.

After an intermission, Ebizō—the evening’s main attraction—appeared in SHUNKYŌ KAGAMIJISHI, a piece created for Ichikawa Danjūrō IX in 1893. It became part of his collection of greatest hits, the Shin Kabuki Jūhachiban (New Kabuki Eighteen), a group of plays in which Ebizō takes a special interest. This popular dance play, performed with a sizable complement of nagauta musicians and singers seated on a red, two-tiered platform behind him (a traditional setting would suggest the interior of a palace, with painted, sliding walls), offered the star a chance to show his versatility. In part one, he appeared as a gentle, docile court lady who, against her will, is induced to practice a dance for the New Year’s celebrations. Her dancing includes lots of difficult movements requiring dance fans, but she eventually starts to dance with a carved, wooden lion’s head mask held in her right hand. As she dances, a pair of butterflies, manipulated by a stage assistant, capture the masks’ attention, and it snaps at the butterflies. Soon its intensity has taken over the poor girl’s body and pulls her offstage reluctantly as she fights its power.

An interlude ensues in which two children appear and do a complex dance. The kids were played by the 10-year-old Ichikawa Fukunosuke and the 14-year-old Ichikawa Fukutarō, neither of them the child of a kabuki actor. They were so entrancing and their skills so polished they stole everyone’s hearts, especially the tiny Fukunosuke, who looked younger than 10, at least from nosebleed heaven.
Then Ebizō reappeared as the stomping, romping, masculine lion, in a gorgeous costume with wide sleeves, his face made up in red and white kumadori-style makeup, and with a huge, trailing white wig on his head. The contrast between the lion and the maiden couldn’t have been sharper, nor a better way of demonstrating the actor’s range. Ebizō’s dancing also celebrated his sheer athleticism, as it required him to swing the long wig around in what is called the kamiarai or hair-washing convention, which he did over and over until you thought his head might go flying off.
The stage for each piece on the program was covered with the polished, raised flooring used in kabuki, called shosa butai, which allows the actors to move smoothly over its surface in their tabi socks and to make resonant sounds when they stomp on it. A few tall, folding screens with bamboo stalks painted on them served as the chief decorative background, and, for the nō play, a passageway was cleared for exits and entrances at stage right, where the bridgeway (hashigakari) would be in a Japanese theatre. The bridgeway wasn’t essential to either of the nōgaku performances, but what was clearly missing was some indication of the pillars that support the roof over a traditional nōgaku stage. When, for example, the Japan Society offers nōgaku it uses short, square stumps to indicate the pillars.
More difficult for purists to accept was the lack of an audience runway (hanamichi) for SHUNKYŌ KAGAMIJISHI. Such runways, which require a platform on the same level as the stage to run down an aisle or off to one side of the auditorium, are notoriously difficult to construct in non-kabuki theatres, forcing the actors to exit to stage right, just as they would on a nō bridgeway. SHUNKYŌ KAGAMIJISHI has memorable business on the runway as the court lady is dragged off through the auditorium by the wooden lion mask on her hand. I first saw this in the fall of 1963 at the Shinbashi Enbujō and have never forgotten it, although I've seen many later productions. When the lion later appears after taking over the lady’s body, his runway entrance is equally remarkable. The absence of a hanamichi is something touring kabuki always has to deal with and it’s just one of those things that have to be taken in stride. Shikata ga nai (You can’t do anything about it), as the Japanese say.

AN EVENING OF JAPANESE TRADITIONAL THEATRE was an evening well spent, even from my perch in outer space.
Posted by Samuel L. Leiter at 12:01 PM