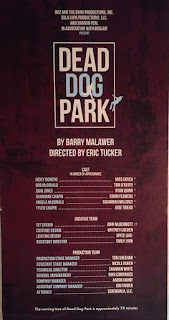 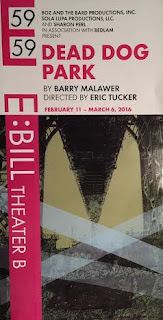 Although not without a few sluggish spots, Barry Malawer’s DEAD DOG PARK is mainly a tight, well-executed, 80-minute drama of the “ripped from the headlines” variety. The play’s subject of police brutality toward black victims couldn’t be timelier even though its issues of guilt and responsibility are deliberately left ambiguous.
John Jones (Ryan Quinn) is an activist African-American attorney, hired by Tyler’s angry, single mother, Sharonne (Eboni Flowers), to represent her in court; she stands to gain millions if Jones succeeds, but insists she’s not in it for the money. Sharonne, convinced the cop pushed Tyler, simply wants justice, but learns her own mothering may be called into question. And she’s fully aware that her son is a troublemaker, further muddying the waters. The case also wraps a stranglehold around McDonald’s marriage to Angela (Susannah Millonzi), who has her own doubts about his innocence.

We become immersed in the murkiness of the tragic events and each character’s response, before, during, and after the trial.  Reasons to sympathize with or suspect both sides are given. Even McDonald himself doesn’t know if he’s guilty or not. The audience is forced to make up its own mind. Regardless of how the jury in the play decides, we wonder if justice is possible under such circumstances. And, despite our awareness of the many black lives brought short by brutal white police, does what happened to Tyler Chapin—at least as far as the play explains it—inspire kneejerk reactions of one sort or the other?
Director Eric Tucker, responsible for downtown’s wonderful SENSE AND SENSIBILITY, handles the multiple scenes and locales in his cleverly minimalist way. The spare setting, by John McDermott, suggests an interrogation room, with only a table and several chairs. Overhead hangs a shabby skylight. Except in the epilogue-like final scene, designer Joyce Liao employs unvarying white light. All the characters remain on stage throughout, sitting or standing still in various attitudes while others are in action, and joining in the dialogue (even when speaking someone else’s lines) as needed. Props are minimal and everyone wears the same things (designed by Whitney Locher) throughout, regardless of what the script says about their clothing. Mr. Tucker orchestrates everything with notable fluidity; even without localizing scenery we know enough about where we are not to require it. His chief fault is in not having prevented the otherwise talented Ms. Millonzi from mumbling; although she has a good, tense scene with Ms. Flowers, her scenes with Mr. O’Keefe are the production’s dullest.
Mr. O’Keefe captures McDonald’s fear and sensitivity as well as his propensity for rage, while Mr. Govea gives a thoroughly natural performance of a man unsure of his position. Mr. Quinn brings sharp intelligence to Jones, the dynamic attorney, while Ms. Flowers, as Sharonne, gives a fierce performance as the feisty mother determined to gain justice, as she sees it. Tyler himself makes a startling appearance (I won’t say how), his presence edging the play to a different level; thanks to the distinctive performance of Jude Tibeau, the play ends potently, offering the audience a lot to think about when they depart.
Please note that I saw this play late in its run and that it closes on Sunday.
OTHER VIEWPOINTS:
Show-score