"It Huffs and It Puffs"

As I sat in one of the eclectically collected old chairs surrounding the circular acting area at the Flea Theater waiting for Adam Rapp’s dystopian Wolf in the River to begin I started getting a creepy, crawly feeling. This was only partly because of my close proximity to the filth-encrusted actors in shabby clothing who were slowly and wordlessly mucking about in the setting’s muckheap of earth, purple flowers, and detritus (looking like cast-off cell phones and video games), or otherwise slithering around the room. In part it was also because I was thinking I was on a time trip back to the Tom O’Horgan-esque, Off-Off, experimental theatre of the 1960s, returning in a full-frontal assault.
In addition to the pre-curtain atmospherics of actors near enough to touch moving about in slow-motion or searching for shards to pitch into a bucket, Wolf in the River offers a dreamlike, disconnected, non-linear narrative that goes in the flick of a tongue from vigorously purple, logorrheic language filled with striking, often anatomical, images (like a distinctive discourse on the human body’s bones) to naturalistic, everyday prose. The characters range from the familiar to the bizarre, and wolf masks and rituals mingle with violence and physically demanding business. Naturally, sex and nudity are essential; one character even rushes on with his pants down as he has intercourse with a blowup doll using Miley Cyrus’s face. And, with 60s-style immersion once more considered daring, our old friend, audience participation, is back, including a climactic scene whose outcome is based on chance (think TV’s “Survivor”). There’s even a celebratory conclusion in which the actors shake hands with and high-five the audience while sharing brownies with them. Like the use of choice to decide on a dramatic outcome, neither the confetti-strewn celebration nor the brownies make logical sense; the brownies, however, are absolutely delicious.

Luckily, this hodge-podge of theatrical tropes is in the capable hands of the Bats, the Flea’s resident acting company, working under playwright Rapp’s retro-styled direction; the script may have made my companion, a veteran of the 60s Off-Off scene, want to flee after 10 minutes,but the terrific commitment and acting skills of these young actors kept him from making an early departure into the chill White Street air.
The press materials list as the play’s subjects, “love and neglect, the challenges of poverty, the dangerous cost of shiftlessness, the simple notion of leaving a place behind, and the value of a girl.” You might as well say that Hamlet is about the need to poison-test your sword when dueling, or to always make sure no one’s listening when having a private conversation. Perhaps the point is to emphasize man’s capacity for cruelty and his desire to flee the misery in which he lives. Whatever it is, I couldn't have cared a rap (pun intended). Wolf in the River is a theatrical grotesquerie that allows Rapp to give his fevered imagination free rein; much of it is godawful self-indulgent and overwritten, some of it is moderately interesting, and a small portion is actually quite fascinating.
Set designer Arnulfo Maldonado has enclosed the performance area with blood-stained, pressed-wood walls on which graffiti abstractions, including human stick figures, overlook the action. A crappy old refrigerator sits in one corner, and a La-Z-Boy recliner, facing away toward a TV screen, in another. As the lights (well designed by Masha Tsimring) go down, the Man (Jack Ellis) rises from his audience seat, where he’s been all along; he rips off his jacket and shirt, displaying a slim, sculpted torso, and, speaking in a Deep South backwoods accent, begins to narrate—if, indeed, that’s what he’s doing. (He’ll also serve in other roles, including a wolf; the script calls him a “shapechanger”).
With almost animal-like ferocity, he counts the spectators, then, displaying her panties and shoes, alludes to a 16-year-old, orphaned girl who was eaten here, near the river—a body of water represented by the audience. The tale, which shoots off in many directions, involves the dead girl, Tana Weed (Kate Thulin), so poor she survived by giving blood; Monty (Xanthe Paige), the beautiful leader of a zombie-like cult, the Lost Choir, each member of which wears a small tube on their arm for when they have their blood drained; Debo (Maki Borden), a persistently smiling, chubby fellow from Illinois who woos Tana in the play’s finest scene; Pin (Mike Swift), the unhappy cult member who has sex with the doll; another cult member, the butch, cornrowed Aiken (Karen Ellbacher); and Tana’s longhaired, tattooed brother, Dothan (William Apps), a PTSD sufferer following his brutal war experiences in Afghanistan. 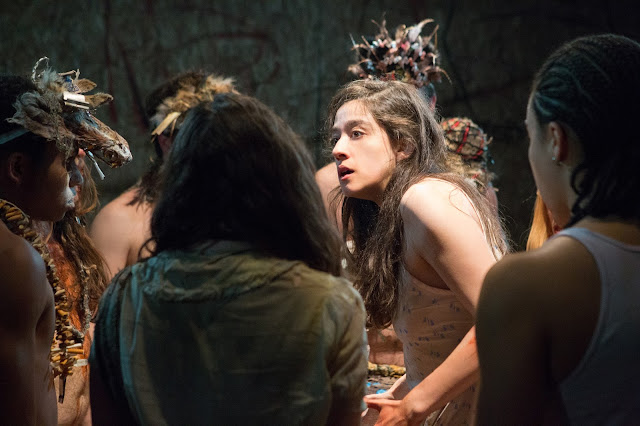 There are various theatrical surprises that offer occasional jolts, like the Miley Cyrus number, “When I Look at You,” done by Monty (lip-synching) in green sequined top and panties (the offbeat costumes are by Michael Hill and Hallie Elizabeth Newton). It’s a non-sequitur but it’s fun. Another highlight is a dangerous-looking sequence in which Tana and Pin work their way across the space by clinging to an overhead rope. The best scene is far less dynamic or overtly dramatic. It’s when Debo, using a long pole as if pushing a skiff through muddy waters, slowly circumnavigates the perimeters of the room while engaging in a flirtatious conversation with Tana on shore. The byplay between the two is perfectly balanced between fantasy and reality and shows Rapp’s talent at its best.

Wolf in the River, which runs an hour and 40 minutes without an intermission, is wildly uneven and will wake you up one minute and may put you to sleep in another (I noticed at least three pairs of closed eyes and sometimes fought to keep my own open). But however much Adam Rapp’s Wolf huffs and puffs, it serves as a marvelous springboard for several exceptional performances, most especially that of Kate Thulin, who makes her every unrealistic moment thrillingly real.

Wolf in the River
The Flea Theater
41 White Street, NYC
Through May 2