“He Was Lost but Now He's Found” 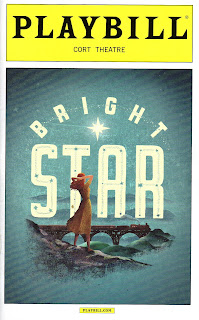 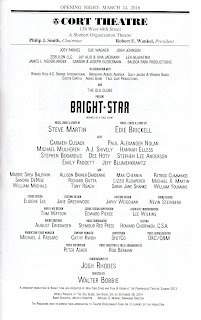 One of modern drama’s most famous plays about a foundling contains this classic observation; “To be born, or at any rate bred, in a hand-bag, whether it had handles or not, seems to me to display a contempt for the ordinary decencies of family life that reminds one of the worst excesses of the French Revolution.” The speaker, as you probably knew, is Lady Bracknell in The Importance of Being Earnest, reacting to the news that when Jack Worthing was an infant he was discovered in a handbag at Victoria Station (“the Brighton line”). It’s hilarious, of course, because of its comic implausibility (although stranger things have happened to foundlings), but it’s not terribly dissimilar to the much darker “true event” that inspired another foundling story, Bright Star, the new Broadway musical by man-of-all talents (including virtuoso banjo picking) Steve Martin and indie folk-pop singer-songwriter Edie Brickell.


Mention of this event isn’t a true spoiler since the New York Times said in its recent feature on the show that Martin and Brickell’s “creative process was helped along when Ms. Brickell was introduced to the story of the Iron Mountain baby, a real-life incident in 1902 in which an infant was discovered in a valise near a Missouri railroad after probably having been thrown from a passing train.” Aside from a scene with a baby, a valise, and a train, the show’s a total fabrication, in setting, characters, and plot. And therein lie its problems.

Martin and Brickell first put their skills together in an award-winning roots CD called “Love Has Come for You” (2013), which led to the creation of Bright Star. Martin wrote the book and Brickell the lyrics, with both credited for the story and bluegrass-influenced music. The show was first produced in 2014 under Walter Bobbie’s direction, with Josh Rhodes’s choreography, at San Diego’s Old Globe Theatre. Some of the original actors and all of the main creative staff are still involved. What they’ve come up with is an entertainingly folksy, feel-good musical with an only fair to middling book.

Bright Star takes place in North Carolina’s Blue Ridge Mountains and follows two related timelines, one in 1923 and the other in 1945/1946. In 1945, 23-year-old Billy Cane (A.J. Shively) returns from World War II to overalls-wearing Daddy’s (Stephen Bogardus) backwoods cabin in Hayes Creek to discover that his beloved Mama has died. He visits the angel statue Daddy planted over Mama’s grave (perhaps a salute to nearby Asheville native Thomas Wolfe’s Look Homeward, Angel). Billy also reacquaints himself with pretty, 21-year-old Margo Crawford (Hannah Elless), a childhood pal who’s “grown every which-a-way” since he’s been gone, and runs a local bookstore.

Billy, ambitious to become a writer, wants to get published by the Asheville Southern Journal, which gets submissions from the likes of Ernest Hemingway, F. Scott Fitzgerald, and Tennessee Williams. At its offices, he meets editorial assistants Daryl Ames (Jeff Blumenkrantz), goofily gay in the usual comic relief way, and Lucy Grant (Emily Padgett), a man-hungry blonde. Using a forged letter, Billy lies to hard-bitten editor, 38-year-old Alice Murphy (Carmen Cusack), about having been recommended by Thomas Wolfe. Alice knows Wolfe died seven years earlier, but, opining that a good liar is a good storyteller, she gives the callow youth an advance. She hopes he’ll turn in a publishable story, one that’s “a sweeping tale of pain and redemption.” There’s pain and redemption in Bright Star but a better adjective would be “weeping.”
When the action moves back to 1923 we’re in the small town of Zebulon, and Alice is 16, the daughter of a puritanical preacher (Stephen Lee Anderson) and his obedient wife (Dee Hoty). Alice is a precocious young "wildcat" with the hots for Jimmy Ray Dobbs (Paul Alexander Nolan), son of the powerful Mayor Josiah Dobbs (Michael Mulheren). The mayor, a Big Daddy type, is intent on following his own domineering father’s footsteps and making sure his son follows his. When the unwed Alice gives birth to Jimmy’s child, the mayor, afraid of tarnishing the family reputation, takes things into his own cruel hands in the heartbreakingly—but hardly believable considering the alternative available—moment that ends act one. Although the stakes eventually rise to fever pitch, too much of this act is exposition setting us up for the payoff.

In act two, it doesn’t take long before the guilt-ridden Mayor Dobbs confesses his deed to Jimmy, thus removing its disclosure as a potentially suspenseful plot point; the act is principally about gluing everyone’s broken hearts together again.  The big, melodramatic reveal on the horizon is visible midway through act one.
Despite the impression of lots going on along the double timeline, much stage time is taken up with secondary matters, like Lucy’s drunken play for Billy; interest is maintained chiefly by the variety of rhythmic and emotional charms in the show’s 19 songs; only a few, though, are takeaways and too many resemble each other. The 11 o’clock number, though, is a power ballad, “At Long Last,” that Cusack knocks completely out of the Cort Theatre.
An onstage orchestra of nine--piano, accordion, percussion, guitars, fiddle, banjo, bass, and the like--playing August Eriksmoen’s twangy orchestrations under Rob Berman’s direction, accompanies the robust singing and dancing while sitting in a movable, cabin-like enclosure. Like other elements in Eugene Lee’s décor, it’s moved around by the nicely choreographed ensemble of actor-singer-dancers playing the multiple secondary roles.
Bright Star uses the familiar, deceptively simple Our Town design trope of an exposed brick wall (simulating the actual one behind it), with the cast often visible in the shadows, even when not directly involved in the action. At several points, a sweet little choo-choo train trundles across the stage, overhead beneath the proscenium arch. When a partial sky drop flies in with its lower edge trimmed to resemble distant mountain tops, Japhy Weideman’s exquisite lighting helps the upstage wall mimic those mountains. Also lovely to look at are costume doyenne Jane Greenwood’s beautifully tailored period costumes, especially the women’s print dresses.

Apart from the actual dancing (including a toe-tapping hoedown), there’s a seamless symbiosis between Bobbie’s staging and Rhodes’s choreography, making it sometimes hard to tell where one ends and the other begins. The cast is uniformly fine, but the brightest star is Carmen Cusack, who can rival any Broadway belter while also offering a convincing country tone, and whose acting shifts nicely between the impetuous teenager Alice and the serious editor she becomes. A.J. Shively makes an appealing Billy, Jeff Blumenkrantz is amusing as the nerdy Daryl, Emily Padgett is a sexy Lucy, Michael Mulheren is a believably bossy Mayor Dobbs, Hannah Elless’s Margo is an attractive ingénue, Stephen Bogardus does well as Billy’s loving dad, and both Dee Hoty and Stephen Lee Anderson make Alice’s parents convincing.

Enjoyable as much of it is, Bright Star, which runs a little more than two hours, may not shine as brightly in Broadway’s constellation as some of its more unique and noteworthy competitors. It’ll be interesting to see if its pleasing bluegrass score, strong performances, and smart staging are enough to compensate for its thin book, melodramatically coincidental premise, stereotypical Southern-fried characters, and conventional situations.